Skip to main content
You have permission to edit this article.
Edit
Home
News
Sports
Marketplace
Bakersfield.com
1 of 2 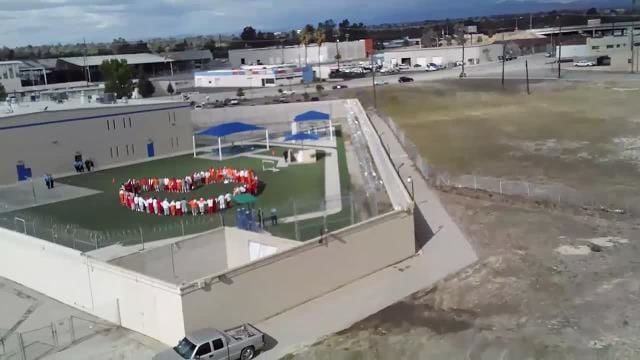 In this file photo, strikers at the Mesa Verde ICE Processing Center form a heart in the detention center yard. 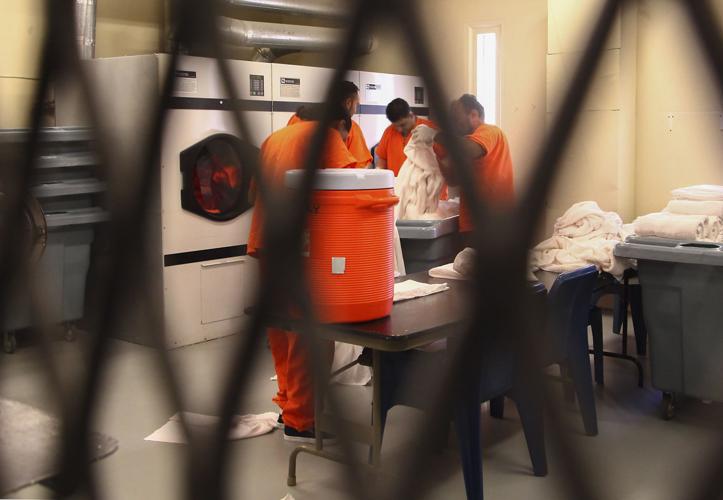 In this file photo,  men work in the laundry room at the Mesa Verde ICE Processing Facility.

In this file photo, strikers at the Mesa Verde ICE Processing Center form a heart in the detention center yard.

In this file photo,  men work in the laundry room at the Mesa Verde ICE Processing Facility.

A coronavirus outbreak has spread rapidly through the Mesa Verde ICE Processing Center in Bakersfield, with more than half of the detainees testing positive for COVID-19 in recent weeks.

Lawyers representing those detained in a class-action lawsuit say as of Saturday, 54 of the 104 detained people at Mesa Verde had received positive results.

Yet the number keeps growing. After a federal judge ordered everyone at the facility who had not yet received a test to be tested, 11 more detainees were revealed to have COVID-19, according to documents filed to the court on Monday by the United States Attorney, which is representing the defense.

“It’s definitely concerning and alarming,” said Ambar Tovar, an attorney with the United Farmworkers Foundation, which represents two clients detained at Mesa Verde, one of whom has COVID-19. “We’ve been calling this out, that they’re not equipped to handle a facility of this size, to respond appropriately to quarantining people safely.”

Advocates for immigrants held at Mesa Verde have been warning of the possibility of a COVID-19 outbreak practically since the pandemic began earlier this spring. Now that more and more detainees are testing positive, ICE and GEO Group Inc., the private prison company that operates the detention facility, have been forced to address allegations that they have not done enough to stop the spread of COVID-19.

Emails between ICE and GEO from as far back as May brought to light as part of the lawsuit show the two parties rejecting universal testing of detainees because they could not adequately isolate people who tested positive, according to lawyers representing the class of detainees.The lawyers say emails also show ICE refusing to test contractors out of the fear a positive result would force them to change their operations.

GEO referred questions to ICE. ICE referred The Californian to its website, where it has only reported 24 coronavirus cases at Mesa Verde, before declining to comment further due to the lawsuit.

The cadre of legal groups suing ICE and GEO on behalf of detainees at Mesa Verde and the Yuba County Jail include the American Civil Liberties Union Foundations of Northern and Southern California, the San Francisco Public Defender’s Office, Lawyers’ Committee for Civil Rights of the San Francisco Bay Area, Lakin & Wille LLP and Cooley LLP. Collectively, the groups hope to improve conditions at the facilities, including the release of detainees deemed medically vulnerable.

Mesa Verde is being kept at 25 percent of its capacity, according to the U.S. Attorney’s Office, which argued in court documents the reduced capacity gave detainees the ability to be socially distant. The office said detainees had been given masks but many refused to wear them or stay six feet apart.

The court has been the battleground by which both sides argue for and against greater measures being taken.

Now that coronavirus has spread through Mesa Verde, Presiding Judge Vince Chhabria, of U.S. District Court Northern District of California, has ordered all people in Mesa Verde be tested using a method that yields rapid results, according to lawyers for the plaintiffs. Mesa Verde’s 140 staffers must also be tested weekly moving forward.

Still, questions remain about how impacted individuals will be treated. Those who have tested positive are now being held in one of Mesa Verde’s four dorms. Chhabria has ordered an update on Wednesday on the conditions inside the COVID-positive dorm and how it could be improved.

Despite the court’s action, the judge’s orders have not done enough for advocates who are hoping to see more detainees released from Mesa Verde in order to protect their health.

“It’s sad to say that even this federal judge has not issued what are the next steps after this. What do we do if the entire facility tests positive?” Tovar said. “I think the next step for advocates is making sure that we are holding every level of officials that are responsible for this accountable.”