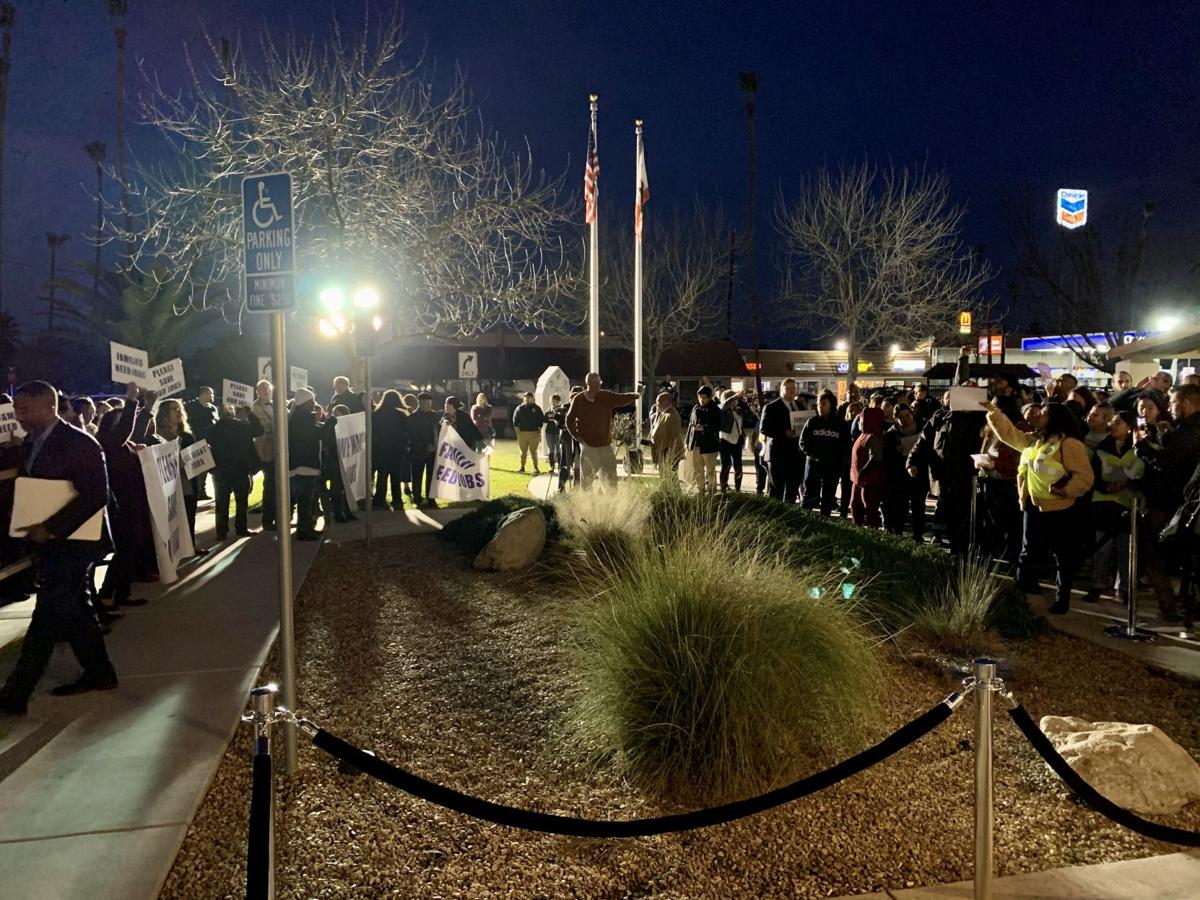 A large crowd of protesters and counter-protesters face off against each other on Tuesday before a meeting of the McFarland Planning Commission. Commissioners were set to hear public comment on permit changes that would allow ICE to expand detention capabilities in the city. 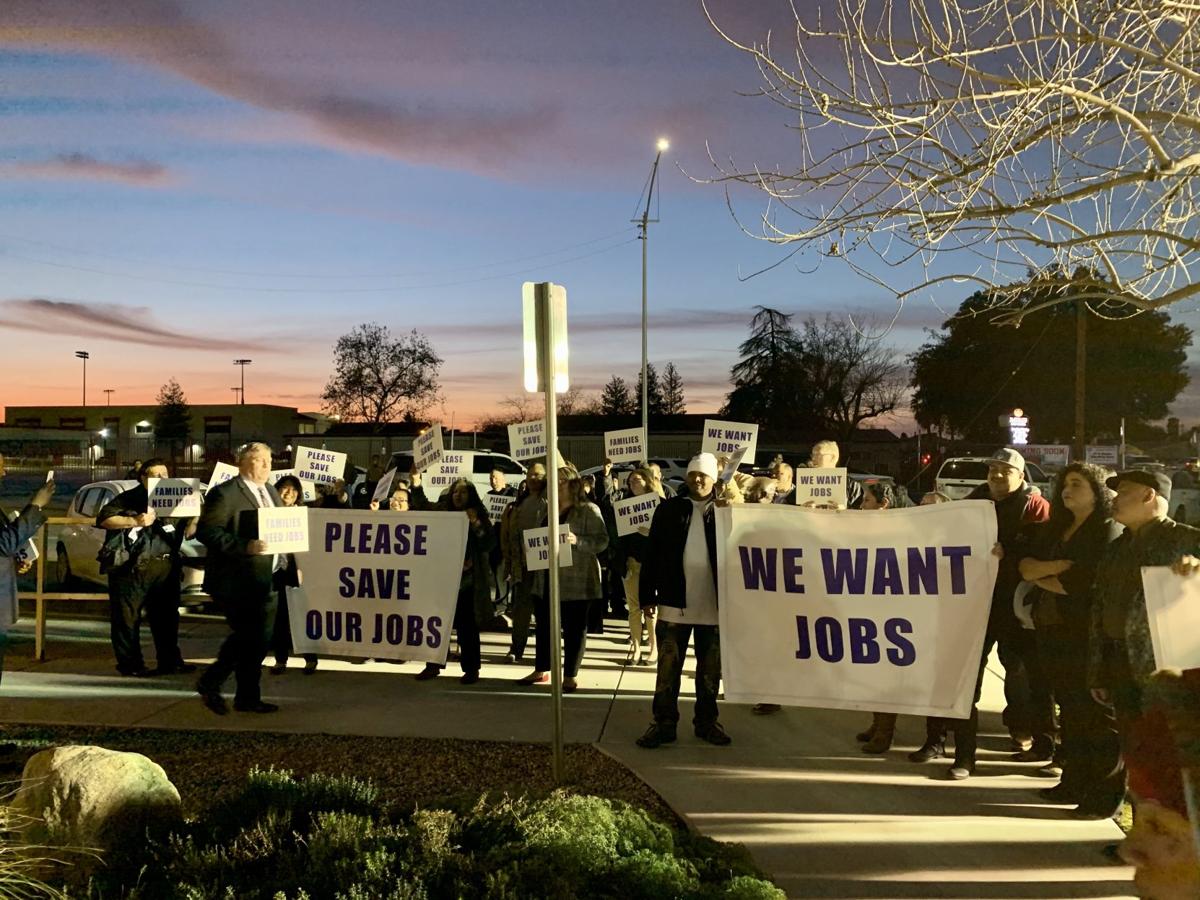 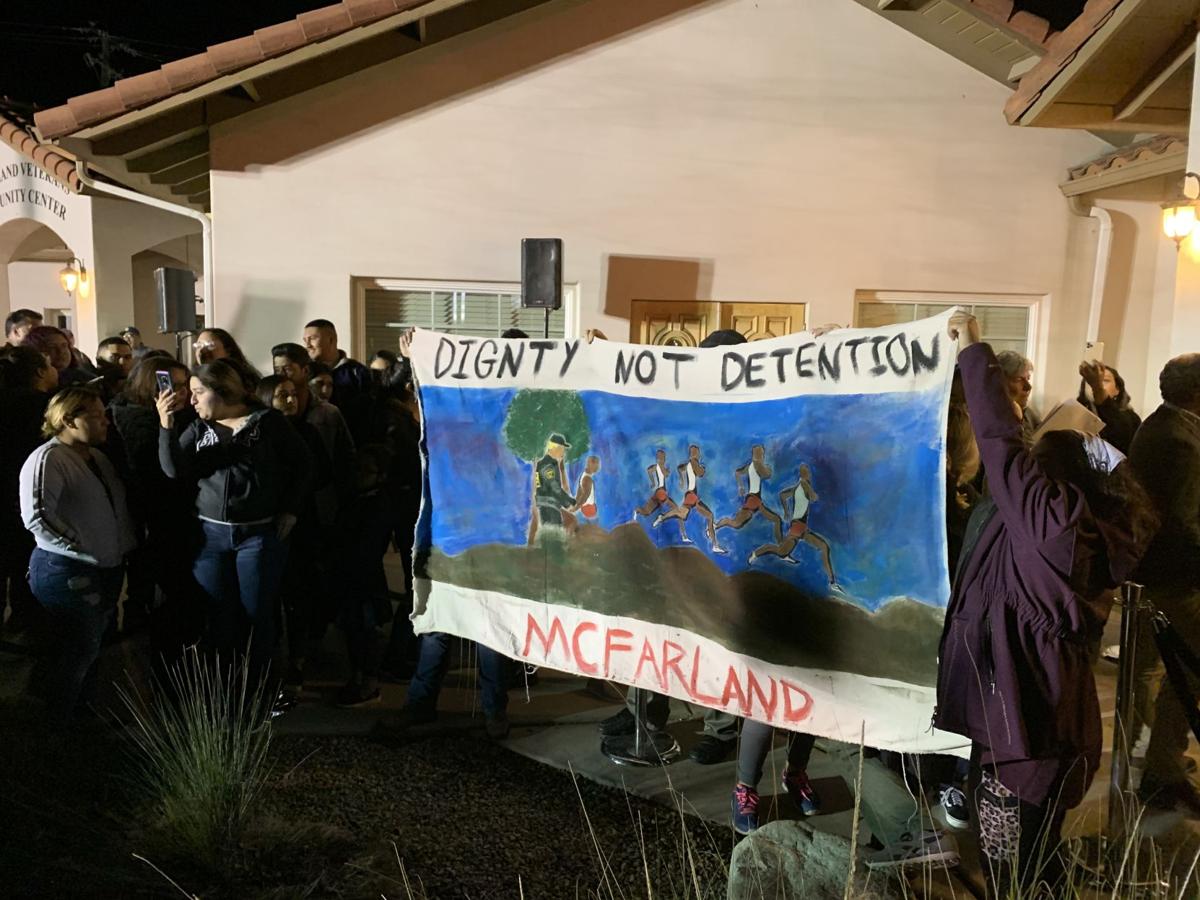 A large crowd of protesters and counter-protesters face off against each other on Tuesday before a meeting of the McFarland Planning Commission. Commissioners were set to hear public comment on permit changes that would allow ICE to expand detention capabilities in the city.

A huge crowd of protesters and counter-protesters showed up to a McFarland Planning Commission meeting on Jan. 21 in which the city took the first steps in allowing the private prison company GEO Group Inc. to expand immigration detention capabilities.

Immigrant-rights activists and GEO employees fighting to keep their jobs clashed in front of the McFarland Veterans Community Center. At one point, the two groups formed lines of verbal battle across from each other and shouted “shut down GEO!” and “we want jobs!” to the other side.

Only around 50 people were allowed to sit inside while the meeting took place. Those that were admitted appeared to be aligned with GEO, and all wore matching black suits. The immigrants rights activists chanted throughout the beginning of the meeting, their shouts easily heard through the thin walls.

“It’s not good for our families, for the community,” Maria Trujillo, who claimed to have been held by U.S. Immigration and Customs Enforcement at the Bakersfield Mesa Verde ICE Processing Center for a month, said before the meeting. “There are more people that are going to be arrested. People will be scared to be here.”

Those in support of GEO presented a different view. Carrying signs that said “families need jobs" and “please save our jobs,” the GEO supporters seemed to be trying to save their community from losing a valued employer.

With the state of California closing private prisons, converting those prisons in McFarland into immigrant detention centers may be the only hope for keeping detention jobs in the area.

“I really wish everyone understood that the things they are seeing in the news about GEO capturing kids and holding families, it’s not what we do and it’s not what we’re looking to do,” said Liz Knott, a program manager for the McFarland Female Community Reentry Facility, which is run by GEO. “I feel very confident that if you visit our facilities, they are clean, they’re safe and we do a good job at housing people.”

She added that closing the facilities would devastate the McFarland area.

The rally and subsequent meeting comes as GEO is attempting to dramatically expand the number of immigrant detention beds in Kern County.

GEO’s contract has terms for 15 years. The contracts are expected to earn GEO $200 million per year in revenue and support more than 1,200 jobs.

Adding both the Golden State and Central Valley facilities to GEO’s roster would expand the number of beds that could be used to detain immigrants in Kern County from 400 to 1,800.

While GEO claims the two facilities will provide much-needed jobs and investment in the area, immigrant-rights activists have pushed back hard on any expansion of ICE’s capabilities.

Jose Servin, communication coordinator for the California Youth Justice Alliance, said private prison companies had a profit motivation to continually fill their facility’s beds, bringing up the possibility that Kern County’s own Hispanic population may see an increased presence of ICE agents if the facilities are converted into immigrant detention centers.

GEO countered this argument in public comments during the meeting. The company claimed residents of Bakersfield, which has held an immigrant detention center for more than half a decade, haven’t noticed an increased ICE presence in their community.

The Planning Commission said it would not take action on the issue at the Jan. 21 meeting. Another public comment will be held in six months before a decision is made on the permits, the commissioners said.