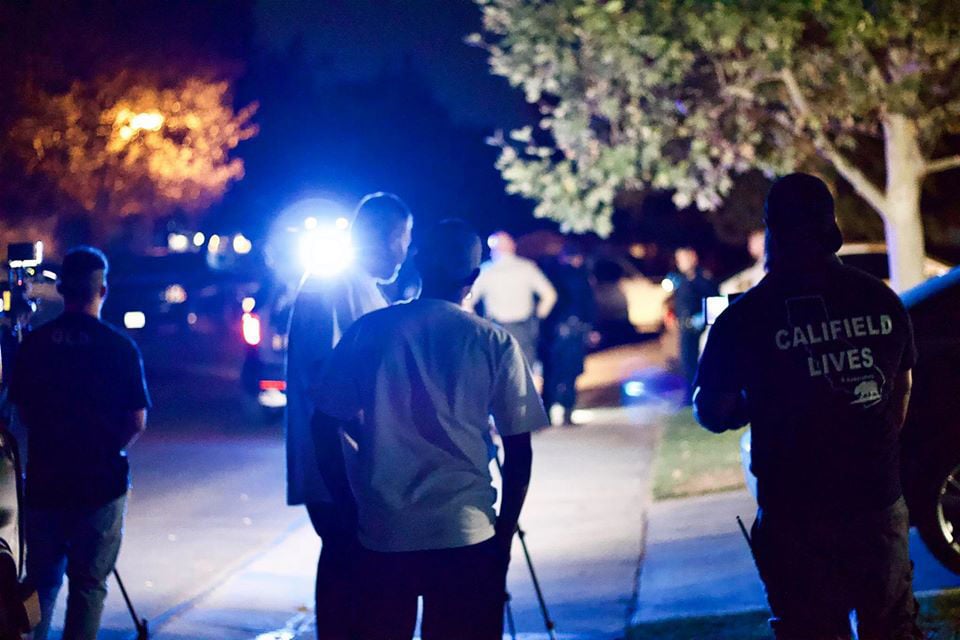 Alexander Rodarte, Travis West and members of the media observe a crime scene while livestreaming the interaction on Facebook Live. 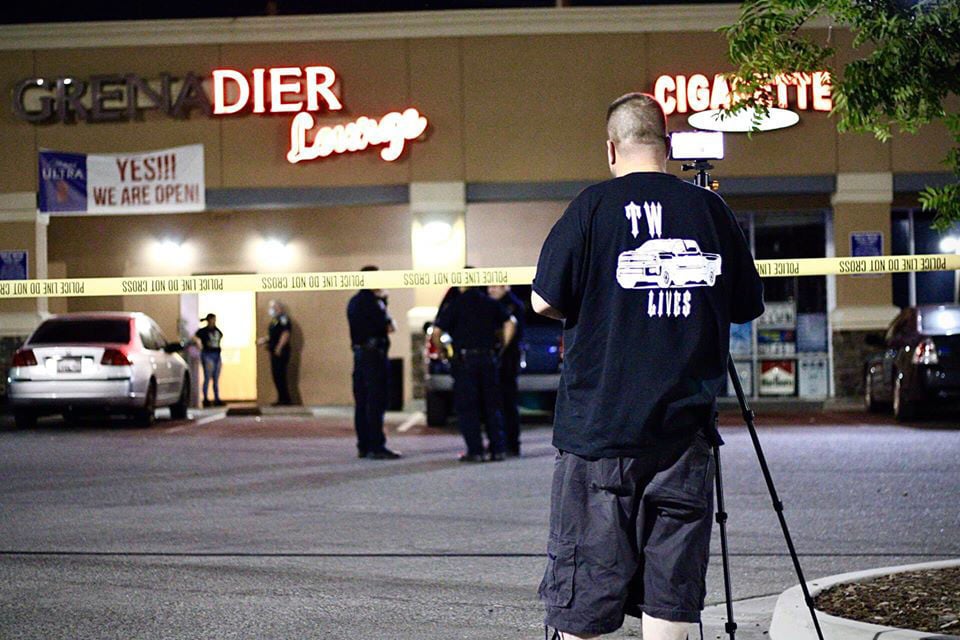 Travis West live streams a crime scene outside of the Grenadier Lounge for an alleged stabbing.

Alexander Rodarte, Travis West and members of the media observe a crime scene while livestreaming the interaction on Facebook Live.

Travis West live streams a crime scene outside of the Grenadier Lounge for an alleged stabbing.

Inspired by his friend’s success in Los Angeles with scanner chasing and selling footage to local news stations, Bakersfield native Alexander Rodarte tried his luck in his home market with his Facebook page, Califield Lives, in 2018.

However, after hustling on a nightly basis trying to sell his footage, it was to no avail.

“I was going to give up and drop it. But I said, hey, I got my equipment, my vehicle and my scanners, let me try and do it for the community through (livestreaming),” Rodarte said.

Rodarte continued with his Facebook page and YouTube accounts and has gained more than 12,000 followers combined. He said livestreaming on his social media platforms allows him to get the "whole story," an aspect of the venture which has allowed him to press forward.

While he used to livestream daily, he’s scaled back to once a week from 8 p.m. to 2 a.m. However, Rodarte isn't alone in the industry and has appeared to inspire others to get involved.

Josiah Valenzuela, 16, began livestreaming his scanner chasing outings on Facebook Live with his page Qualitymoment Productions after meeting Rodarte at a scene about two months ago. Through his Facebook page and YouTube channel, Valenzuela has amassed nearly 6,200 followers.

He doesn't even have his driver’s license yet, but has been able to get by with help from his family.

“I got into scanner chasing because I always liked the sirens and lights when I was little and I love shooting photography, too,” Valenzuela said.

Earlimart native Travis West has been one of the more recent additions to the local livestream scanner-chasing community. He never considered doing it until Rodarte encouraged him to go live while watching a protest in front of the downtown Bakersfield Police Department on May 29.

On June 4, West created his Facebook group TW Lives. The group has nearly 2,500 members ranging from as far as Australia and Germany, West said.

West affectionately refers to his viewers as “the family” — sometimes a dysfunctional one — because of how supportive they've been to him and each other. However, he and a few others he appointed as moderators strive to keep the group somewhat civil.

“We only have two rules — no racism and no political stuff,” West said. “We try to be unbiased; we’re here for the footage. But I don’t tolerate racism and we’re not here to get political.”

West is accompanied by his business partner, Eric Esquivias, on a nightly basis, who's responsible for still photography and hopes to incorporate some live drone footage in the future. Esquivias didn’t know West personally but decided to link up with him June 13 at a community event the two attended.

The two also utilize remote dispatchers to direct them to calls. They try to livestream on a nightly basis, from 8 p.m. to 2 a.m., yet they’ve also gone much later.

All of the livestreamers have found themselves in dangerous or difficult situations. Rodarte said he was once caught in a shootout during a nine-hour standoff between law enforcement and a suspect about four months ago.

West and Esquivias said the most difficult thing they’ve dealt with was being on scene June 18 when a 1-year-old toddler fell from an apartment window in the 600 block of Union Avenue.

When asked for their takes on scanner chasers, the Bakersfield Police Department and Kern County Sheriff’s Office said it was within people’s legal rights to do so. BPD Sgt. Nathan McCauley said there's been some instances when scanner chasers have caused disruptions or have acted antagonistically to create a reaction.

“Overall, as long as they’re standing out of the middle of an investigation and not creating a safety hazard, they’re within their rights to do so,” McCauley said.

“Scanner chasers are legal, so we don’t have a stance on them,” Youngblood said. “We haven’t had any major issues with them.”

With each being viewer-funded, the streamers try to give back to the community in their own ways.

“I got a lot of donations at one time and I like to be humble and I know when God blesses me, I want to bless others,” Valenzuela said. “I did a free photo shoot today for a foster kid to try and pay it forward.”

West will sometimes livestream during the day to patronize various local businesses in an effort to help them back on their feet after taking a hit during the COVID-19 pandemic.

Rodarte said he travels with Red Cross information to pass along to any house fire victims. He said it isn’t uncommon for viewers to donate money for Rodarte to buy a warm meal for a homeless person.

“It’s not all about listening to the scanner and chasing calls,” Rodarte said.