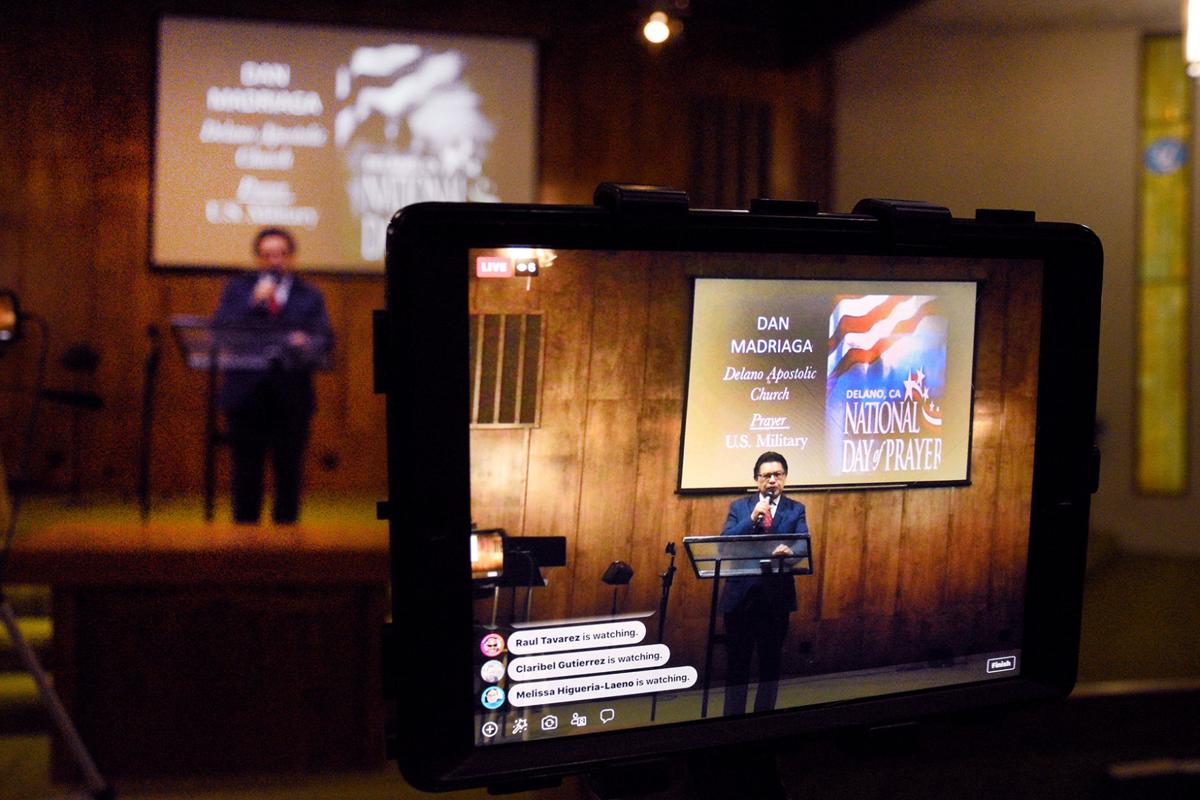 May 7 was National Day of Prayer, but due to the coronavirus, the usual breakfast was not possible. Instead, it was broadcast on Facebook Live. 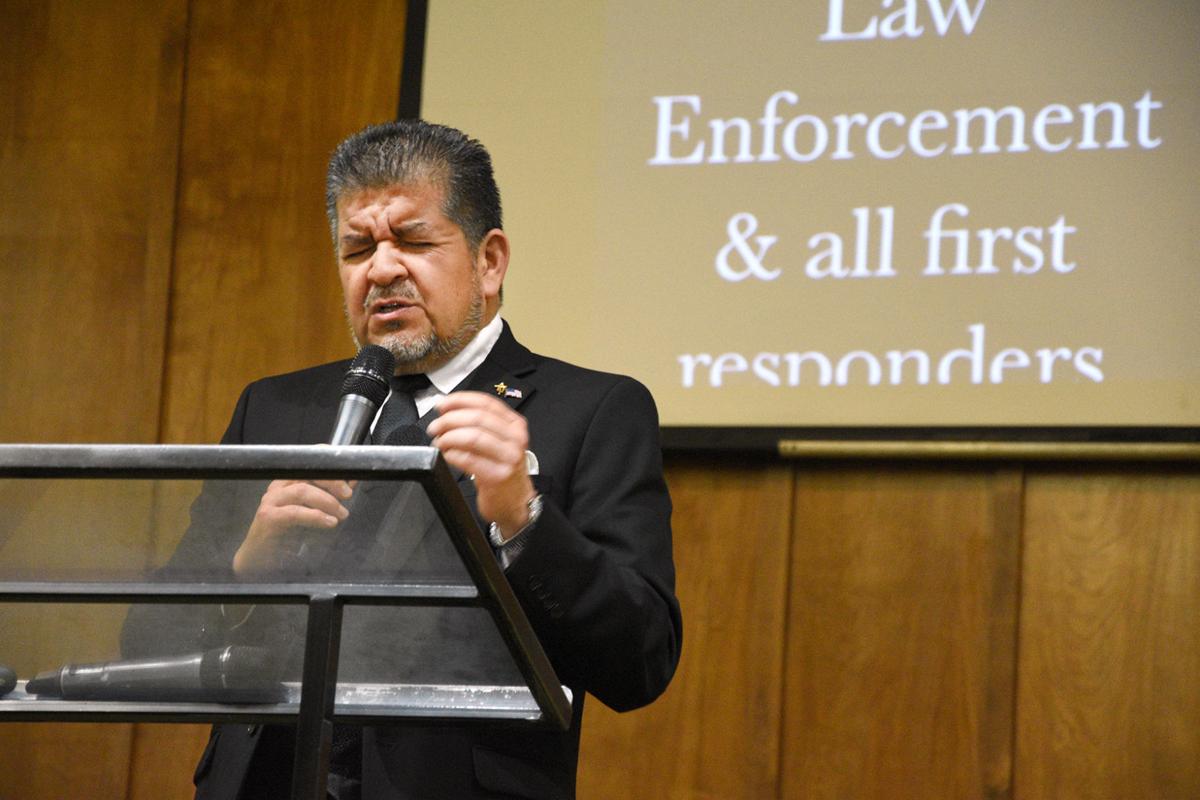 Pastor David Vivas of World Harvest Church prays May 7 for law enforcement and all first responders during National Day of Prayer. 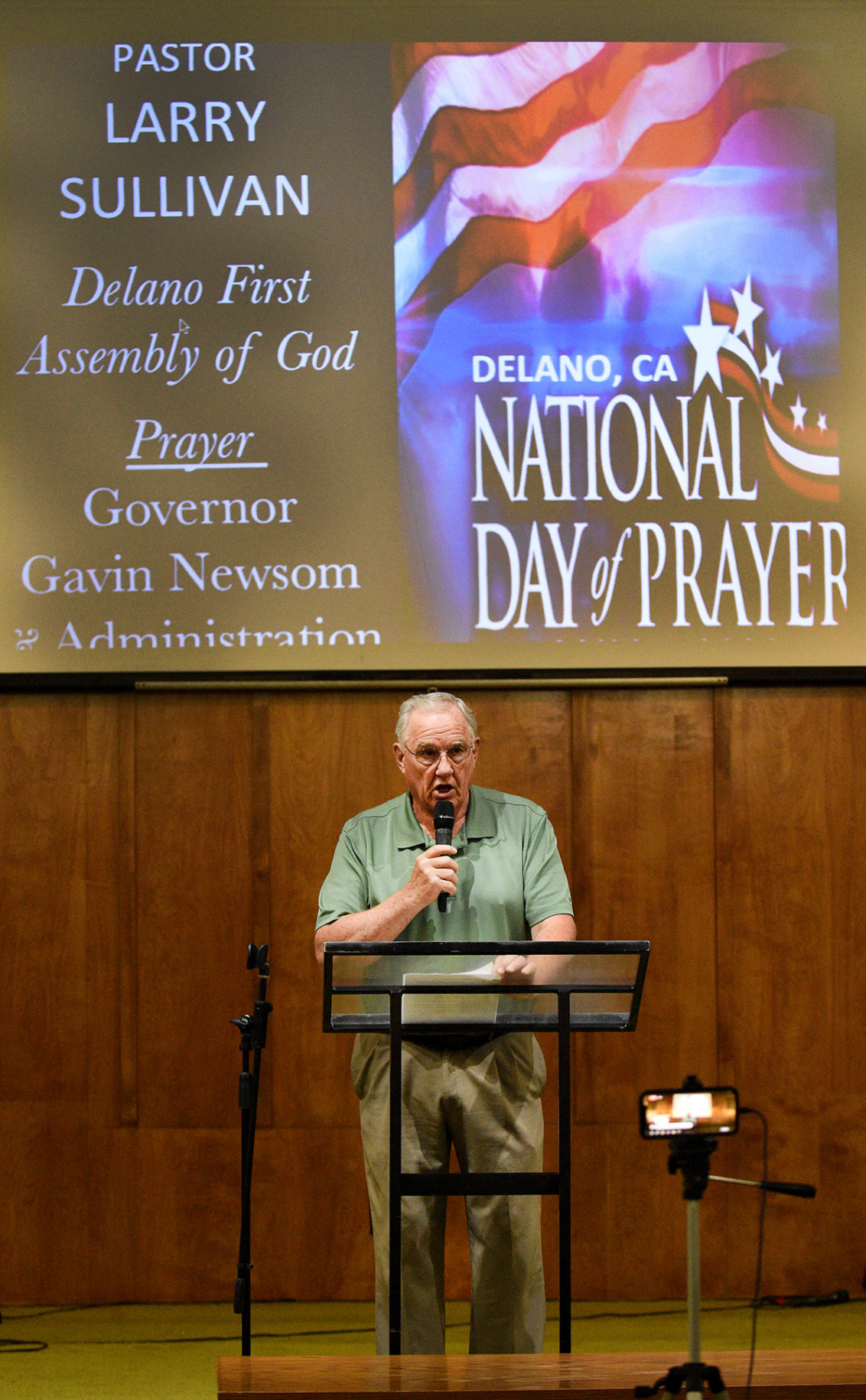 First Assembly of God Pastor Larry Johnson, who hosted the May 7 National Day of Prayer, prays for state Gov. Gavin Newsom and other state officials.

May 7 was National Day of Prayer, but due to the coronavirus, the usual breakfast was not possible. Instead, it was broadcast on Facebook Live.

Pastor David Vivas of World Harvest Church prays May 7 for law enforcement and all first responders during National Day of Prayer.

First Assembly of God Pastor Larry Johnson, who hosted the May 7 National Day of Prayer, prays for state Gov. Gavin Newsom and other state officials.

Delano's National Day of Prayer event Thursday night had plenty of pastors with positive messages and prayers to almost everyone but was missing one item: an in-person congregation.

However, Pastor David Vivas Jr. helped organize a "virtual congregation," reaching at least hundreds, and probably thousands of viewers on Facebook Live in partnership with DelanoNow.com.

It was a far cry from the 2019 Delano Mayor's Prayer Breakfast, hosted by then-mayor Joe Aguirre, which featured pastors, local elected representatives and even Alan Autry, television series star and former Fresno mayor. Aguirre was the only "in-person" Delano City Council member on hand Thursday at the Delano First Assembly of God Church.

His message wrapped up the hour-long event acknowledging the need for all the encouraging words and prayers by the local pastors he followed.

"We need to surrender the city of Delano back to the Lord Jesus Christ," Aguirre said. "Last year at our Mayor's Prayer Breakfast, we sought your guidance and protection, Lord. We need you more than ever through this pandemic."

"We have to have faith," he continued. "It's about Jesus and what he did for you. Please don't stop encouraging us and building us up."

The National Day of Prayer is held on the first Thursday of May, inviting people to pray for the nation, said Vivas Jr. of World Harvest International Church in Delano. It was created in 1952 by a joint resolution of the United States Congress, and signed into law by President Harry S. Truman. It exists to communicate with every individual the need for personal repentance and prayer and to mobilize the Christian community to intercede for America’s leaders and its families. The Task Force represents a Judeo-Christian expression of the national observance.

Former Delano Mayor Art Armendariz decided in 2000 to hold this annual event and hosted a breakfast, previously known as The Mayor’s Prayer Breakfast. Armendariz raised money to fund a breakfast and asked the Delano Ministerial Association to organize the itinerary, Vivas recalled. The Delano Chamber of Commerce worked alongside, gathering various sponsors to support this event. The name of the event was later changed to its appropriate title as the Community National Day of Prayer breakfast.

A number of inspirational speakers over the years have spoken at the event.

Velyines asked God, "For those suffering grief or depression, please lift their burdens Lord, touch their hearts and minds."

Cortez prayed for children and schools.

"Remember, God comes to us at all ages," he said. "And the Kingdom of Heaven belongs to the children."

"Show them their purpose in life," Cortez added.

Madriaga, who focused on military prayers, also said, "This has been a terrible time for some with the COVID-19 (pandemic), but when it is all over, we will be a better people for it. We will be more disciplined and grateful for what we have."

Wallace prayed for local business and the overall economy, which has taken a huge financial hit from the pandemic.

"Lord, we pray that our economy and businesses will recover," Allen said. "We thank you that we were able to conduct essential business with more appropriate safety practices."

"We hope you will grow our economy in this post-pandemic world," he concluded.

Vivas finished the various prayer sessions focusing on law enforcement and first responders. He also prayed for the sick.

"Please end the suffering for those with illness including those with stage 4 cancer, multiple sclerosis and those who came down with COVID-19," he prayed. "Protect doctors and other specialists so they can help eliminate suffering, and the sick can experience health and wellness."

Vivas also prayed for Delano Police Chief Robert Nevarez and all his officers, asking they "be given keen insight to old cases, so people may step forward with new information leading to conclusion of cases and bring peace and comfort to victims' families."

"Oh Lord, we hope there is some good that comes from this pandemic situation," Vivas finished.