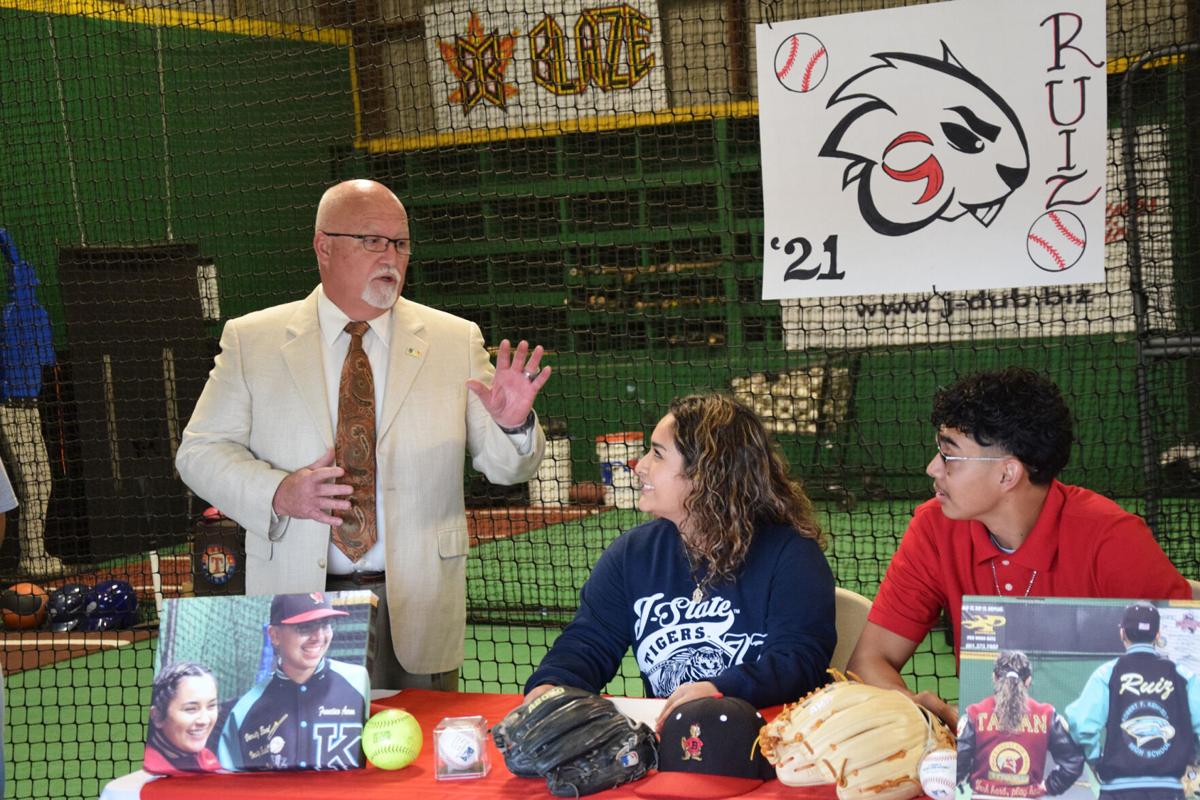 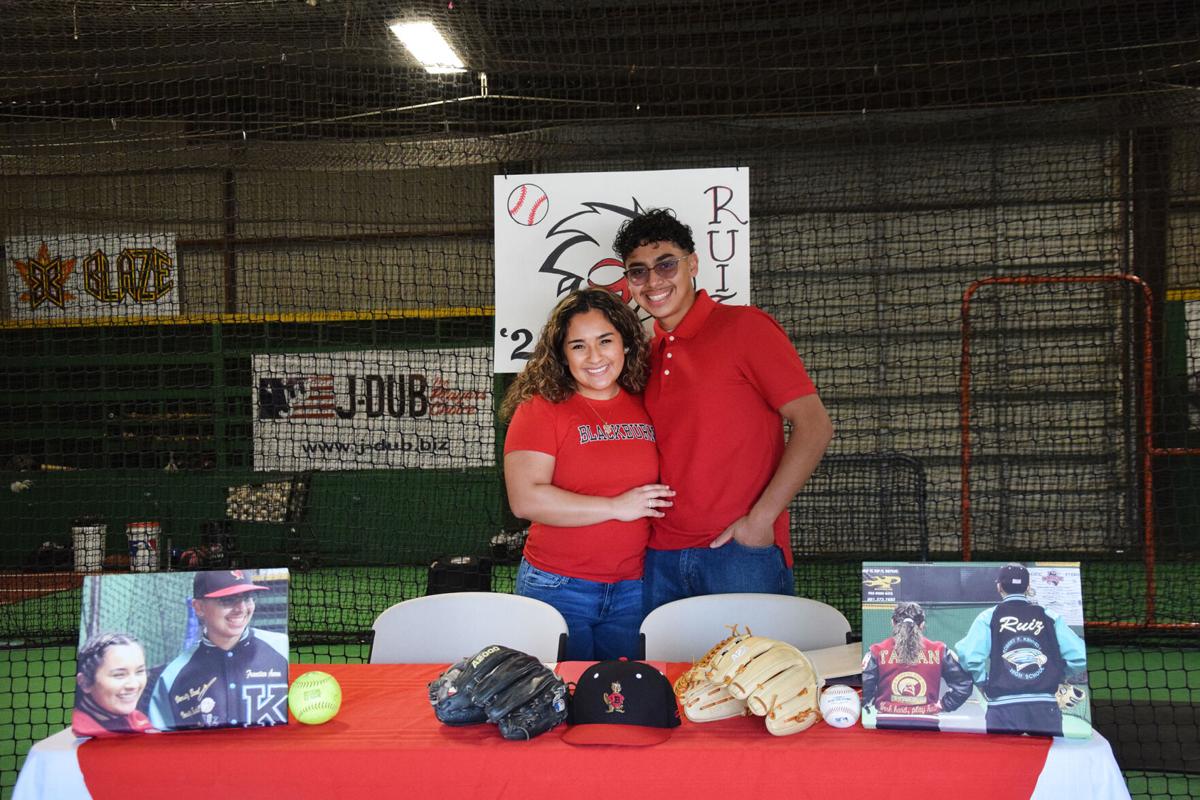 Frankie Ruiz and Julianna Tabian pose together before beginning their signing ceremony. 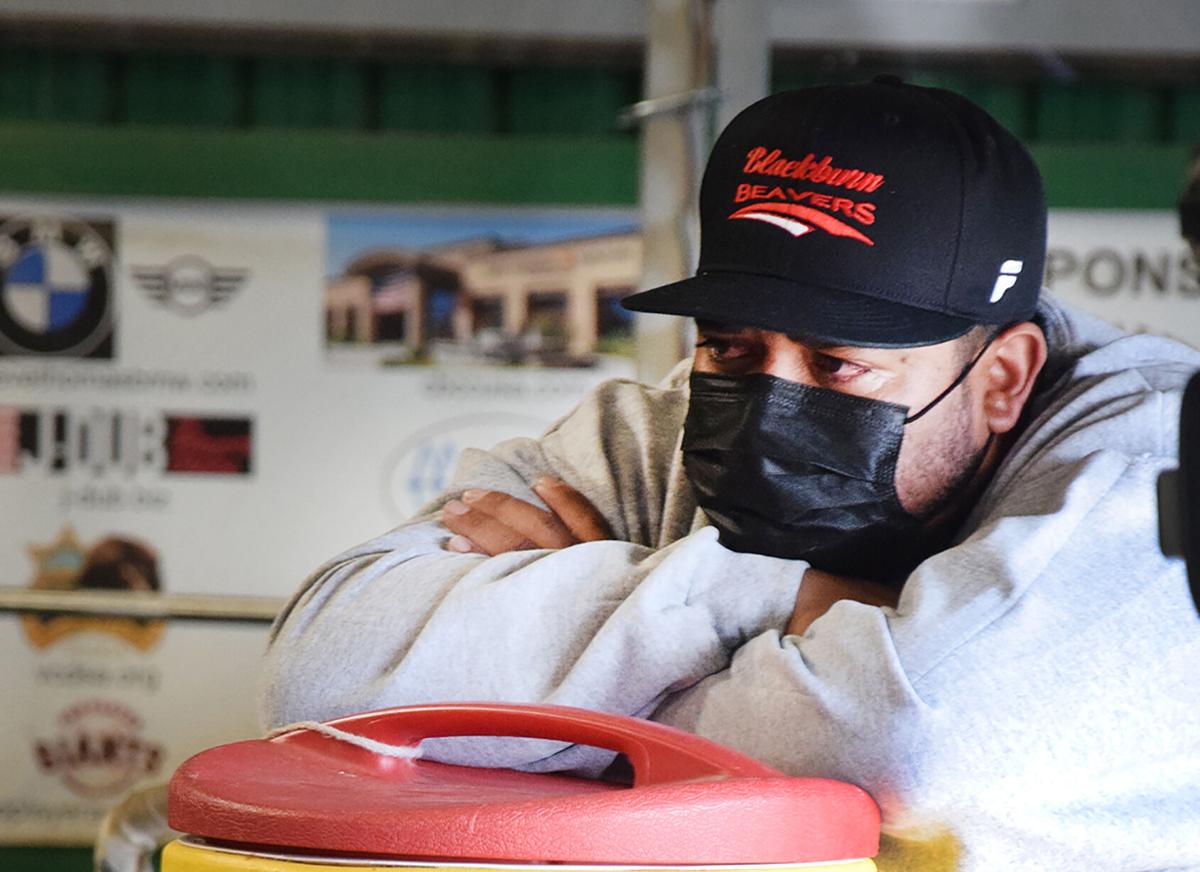 Francisco Ruiz Sr. is emotional listening to his son give his signing speech. 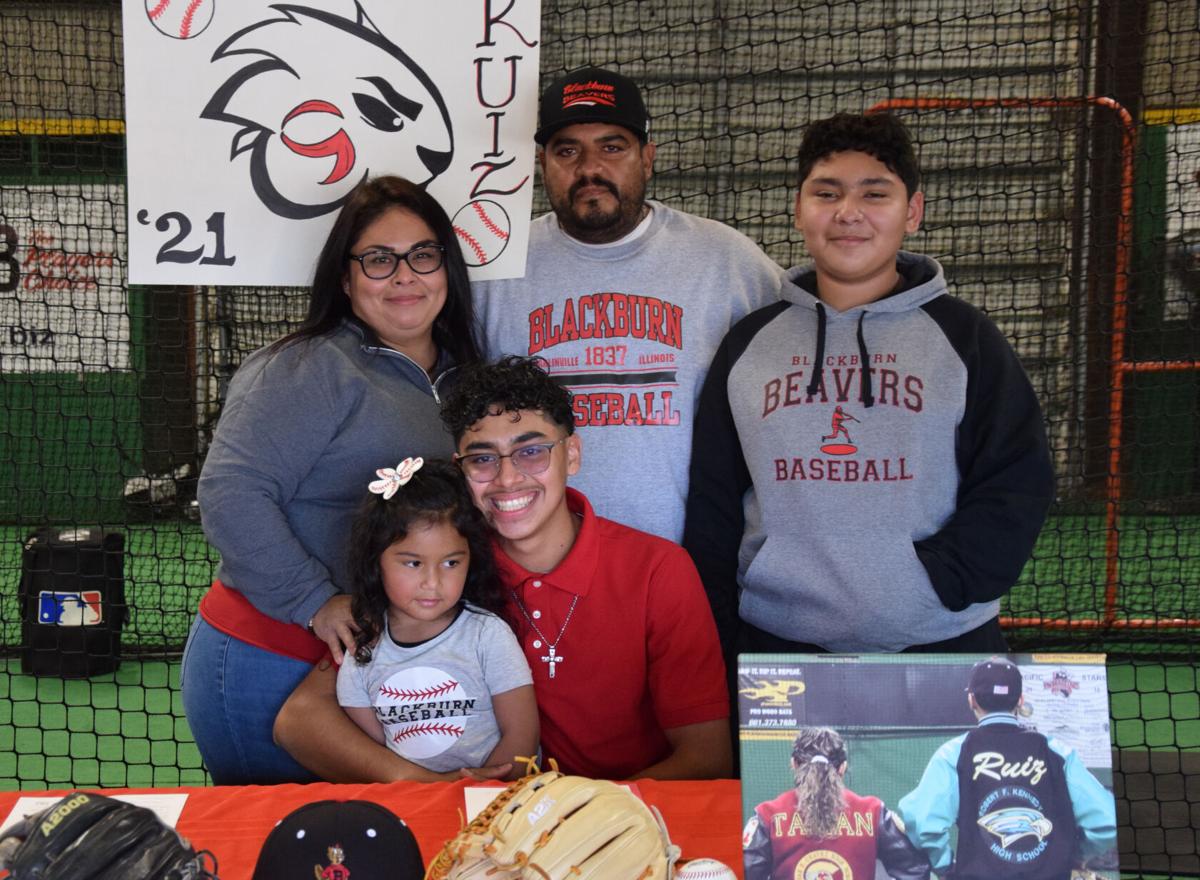 Frankie Ruiz poses with his family after signing his letter of intent to play college baseball at Blackburn College.

Frankie Ruiz and Julianna Tabian pose together before beginning their signing ceremony.

Francisco Ruiz Sr. is emotional listening to his son give his signing speech.

Frankie Ruiz poses with his family after signing his letter of intent to play college baseball at Blackburn College.

Two high school athletes from Delano have signed their letters of intent at a small ceremony in Bakersfield. Robert F. Kennedy’s Frankie Ruiz and Cesar Chavez’s Julianna Tabian had a joint ceremony to celebrate their futures playing collegiate baseball and softball, respectively.

The March 24 event took place at the Pro Player Academy of Baseball and was led by the academy’s coach, Bill Gentry, who has been coaching Ruiz for nearly a decade. He began with a speech commemorating the two on their accomplishments.

“As a student and athlete, this is the day they’ve been waiting for all their lives,” Gentry said, “This is the point where they get to commit to their future and play the sport they love.”

Gentry also took the opportunity to speak about the two specifically, stating that their work ethic and strong character is what led them to their collegiate opportunities. And it was those traits that gave them the possibility to succeed at their respective schools.

Once Gentry finished, Tabian was the first of the two athletes to speak. She began her speech thanking her family, both related and extended.

“I have a big family, and it’s not just the Tabians, but the Ruiz family too,” Tabian said. “And it’s because of all this support that I feel blessed.”

Tabian also thanked Gentry for working with her when Delano lacked resources for softball players, and how he led her progression as a player.

As her speech came to a close she also reflected on what it took to get her to this point.

“It took a lot to get here and sign these papers, a lot of sweat and tears went into it,” Tabian said. “But I’m very thankful to have been supported by two loving families.”

Shortly after this Ruiz began his speech, opening his statement by thanking the lord and his family for providing support throughout his career. He then thanked Gentry specifically.

“I remember when I first worked with Bill, and at the end of a drill he told me if I hit the glove off of a mannequin I could keep it,” Ruiz said. “And on my last try I did it, and that’s the glove you see in front of me. It took years for me to realize how much this glove meant to me, and now I want to thank you so much for that.”

After thanking Gentry, Ruiz turned to his parents and expressed his gratitude for all the years of support.

“Thank you for always pushing me, and teaching me things about life,” said an emotional Ruiz. “From working after-hours to put food on the table and a roof on our head, I want to thank you. I will always carry your toughness and continue to work hard to better my future.”

As Ruiz finished, Gentry gave a brief statement before the pair of athletes signed their documents to seal their future of playing at the collegiate level.

The ceremony concluded after a brief speech from Gentry as he gave Ruiz’s parents his very first home run ball.

The two athletes will begin their senior campaigns in just two weeks as Delano’s spring sports season approaches. With their futures ensured, both are preparing to make the most of their final season.