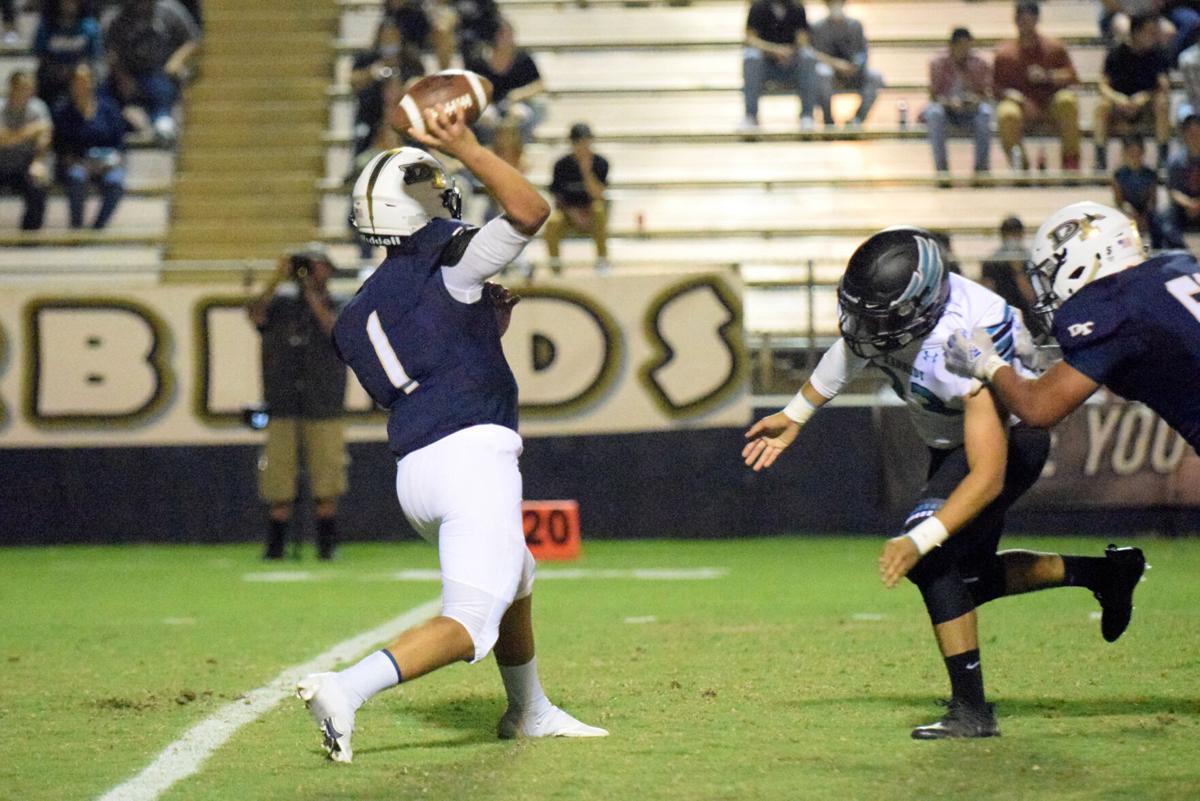 Delano quarterback Eddie Silva throws a pass while being rushed by a Kennedy defender during their game Sept. 9 in Delano. 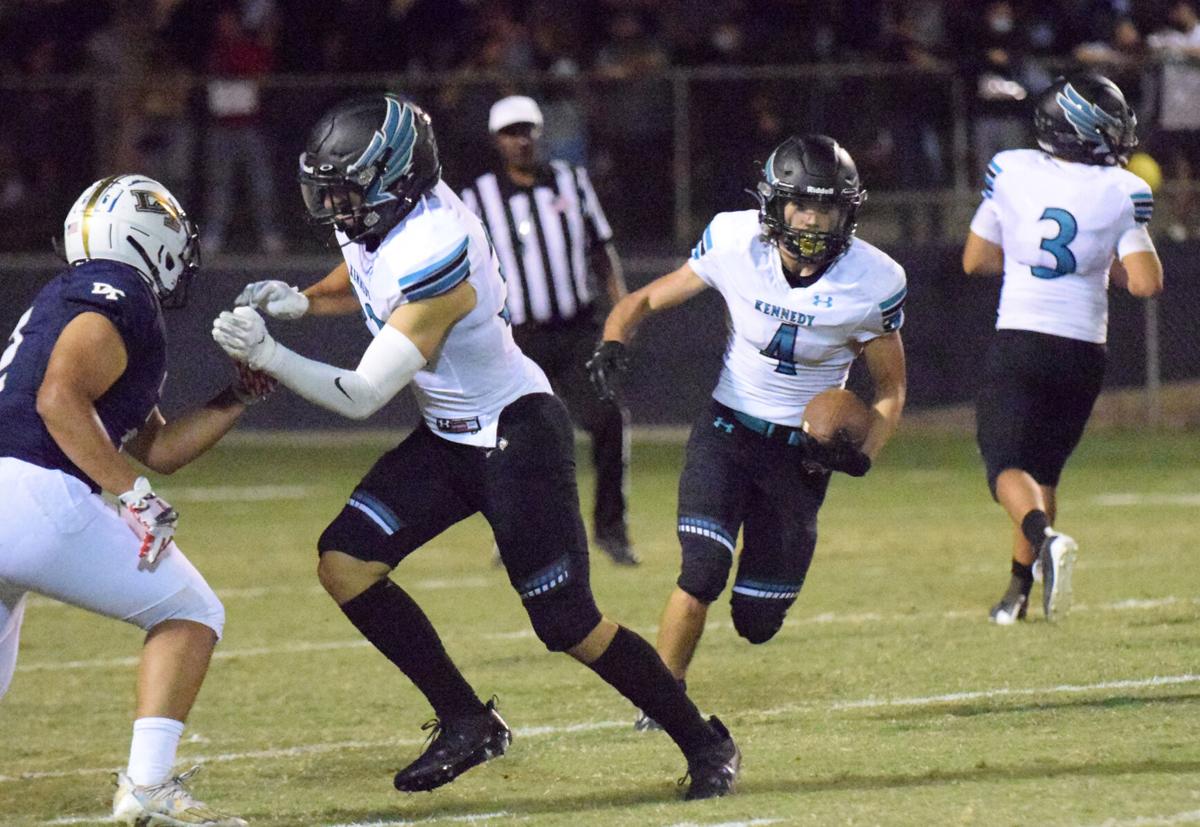 Kennedy's Hugo Mora (4) runs for a gain during their game against Delano Sept. 9.

Delano quarterback Eddie Silva throws a pass while being rushed by a Kennedy defender during their game Sept. 9 in Delano.

Kennedy's Hugo Mora (4) runs for a gain during their game against Delano Sept. 9.

Robert F. Kennedy High School earned their first win over in-town rival Delano High School during a Thursday night thriller last week. The Thunderbirds ended the game with a 41-14 victory over the Tigers, however the game was not as big of a blowout as it seems.

The game itself began with a crowd of hundreds gathering in Delano’s famed Gene Beck stadium, with fans filling both the Delano and Kennedy side of the bowl. Delano received the opening kickoff and picked up a first down before punting it away to Kennedy.

The first Delano possession seemed to set the tone for the game as a defensive struggle between the two, however Kennedy split the game open with a 67-yard touchdown run from senior running back Avian Pesina on their very first offensive snap.

Despite the quick score, the Delano sideline remained poised, looking to answer back with their own offensive drive, but after another three-and-out tensions began to rise as they punted for the second time. This tension was quickly alleviated, with a run stuff on Kennedy’s Pesina on their second offensive down.

The two teams then traded multiple possessions before Delano began a successful offensive drive of their own, marching down the field for five minutes of game time. As the first quarter came to a close, Delano was at the goal line with the ball placed on the 2-yard line.

The second quarter opened with an Alexis Cervantes rushing touchdown for Delano to tie the game 7-7. Upon receiving the ball, Kennedy’s offense began driving and got into Delano territory, but a series of defensive stops forced the Thunderbirds to punt again.

The teams then traded possessions, but Kennedy striked first with another Avian Pesina rushing touchdown to take the lead 14-7. As Delano’s offense set out to even the score, their sophomore quarterback Eddie Silva threw an interception while attempting to pick up a first down.

The turnover led to yet another Kennedy touchdown, putting the Thunderbirds up 21-7 with less than two minutes remaining in the half. Delano responded with a quick pass-heavy drive in the final seconds of the half to score.

The Tigers scored their second touchdown with just seconds remaining off of a Eddie Silva pass to sophomore wide-receiver Jayden Gurrola and entered halftime down 21-14.

The Thunderbirds received the ball to open up the second half. At this point the game looked to be heading into a last second finish or possible overtime, as the first half had been a defensive struggle of two fairly evenly-matched teams.

However Kennedy took over in the second half, scoring first in the third quarter and preventing the Tigers from answering back with stout defensive series. With another touchdown to close out the third quarter, the Thunderbirds headed to the fourth leading 34-14.

The fourth quarter saw one more Kennedy touchdown before both teams began to sub their players in. The Thunderbirds ended the matchup with a 41-14 victory over their in-town rival to remain undefeated after four games.

The loss marked Delano’s first of the season, putting a stop to an impressive win streak to begin their 2021 campaign. However, Delano was slated as the underdog in this matchup yet kept it competitive for nearly three quarters with a team thought to be better.