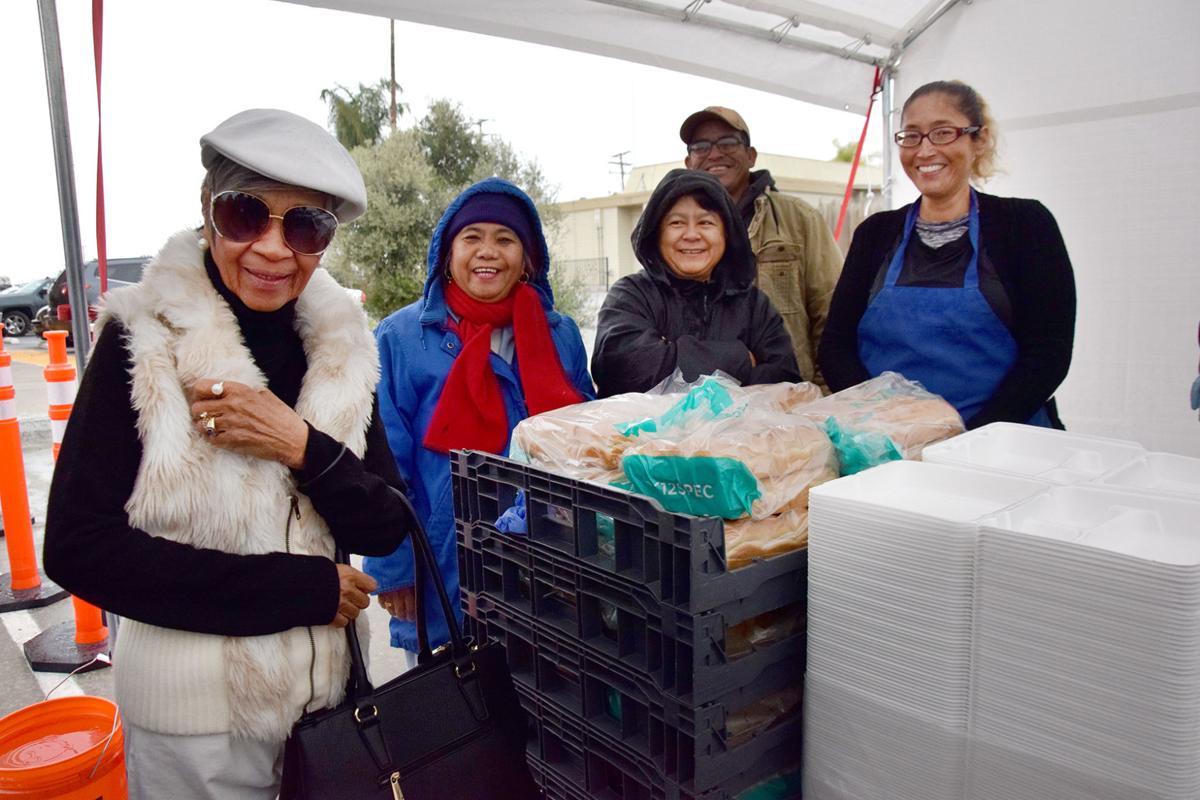 From left, Azucena Kovalenca, Geneva Santos and Marciela Montes were first in line for the Delano community Thanksgiving meal on Nov. 28. 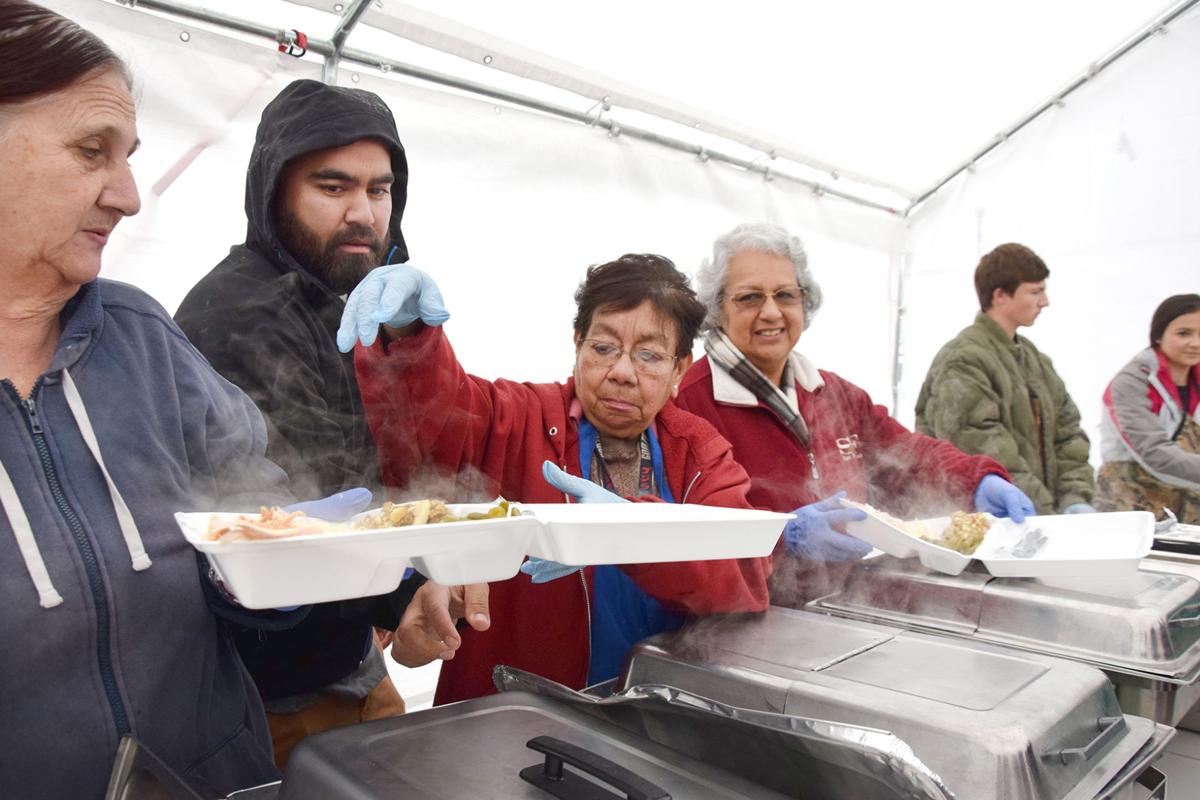 Community volunteers begin the assembly line on Nov. 28 to kick off the Delano community Thanksgiving meal. 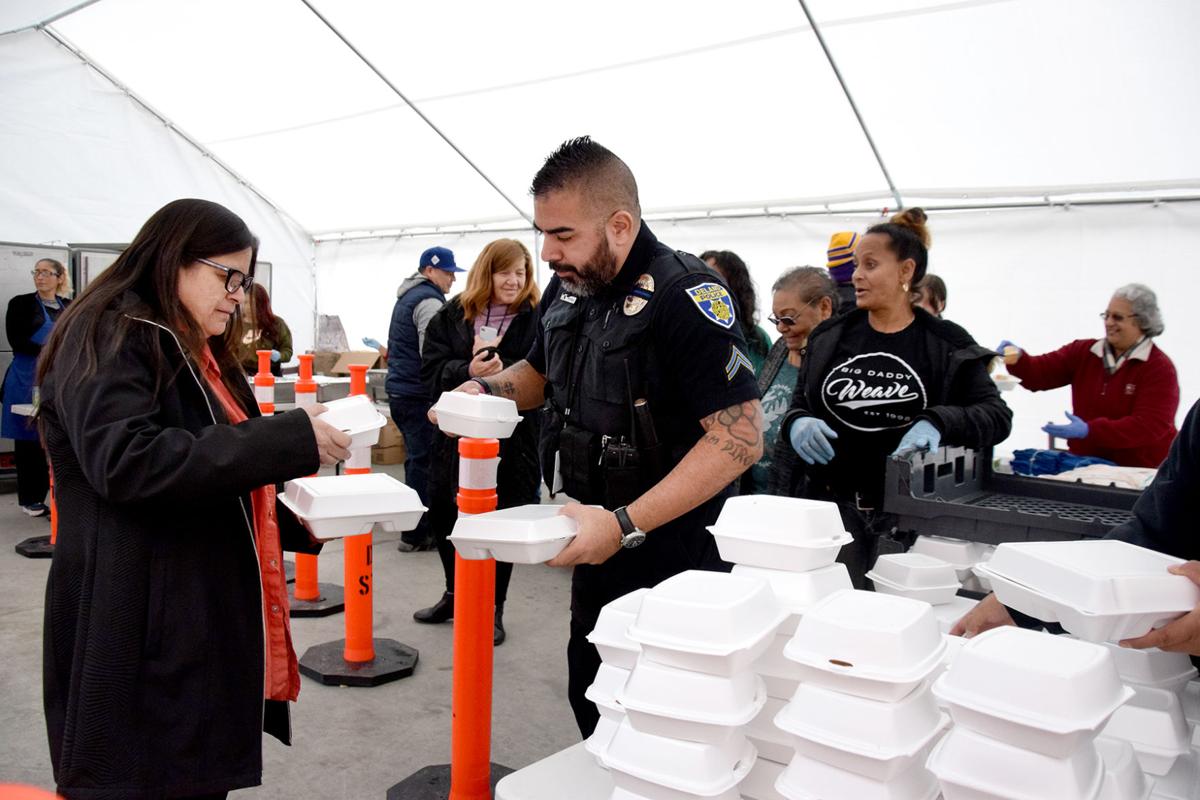 From left, Azucena Kovalenca, Geneva Santos and Marciela Montes were first in line for the Delano community Thanksgiving meal on Nov. 28.

Community volunteers begin the assembly line on Nov. 28 to kick off the Delano community Thanksgiving meal.

Hundreds of volunteers turned out on a cold, wet Thanksgiving morning to be part of the new version of Delano's Thanksgiving Community Luncheon.

At times, it appeared there were more of these younger and older volunteers than people needing a meal.

But that didn't seem to deter anyone, as the meal scheduled to start at 11 a.m. actually kicked off at 10:20 a.m. and ran through 1 p.m. in between drizzling showers. Servers set up in a giant white tent, moved like an assembly line getting the all-important holiday staples ready: turkey, mashed potatoes, veggies, stuffing, roll and, of course, pumpkin pie.

Because of the weather, most people ate their meal inside Tony's Firehouse at County Line Road, whose owners, along with a steering committee of local leaders, brought the event back after a two-year absence.

Delano businessmen Tony Martinez Sr. and Dalip Singh, former owner of Singh GMC of Delano, started the community tradition back in 1986, providing a free Thanksgiving luncheon for anyone who needed it. That tradition lasted about 30 years. The first two years the meal was held at the dealership and then it moved to the Delano Armory, which is now closed to public functions.

Art Armendariz, a Delano Joint Union High School Board trustee and aide for District 4 Supervisor David Couch, moderated the steering committee. He and Couch turned out for the event geared for the needy and those with no means to celebrate the holiday. But just like Nov. 28 turned out, the community meal was open to everyone, especially older folks who may not have anyone to celebrate Thanksgiving with.

Armendariz welcomed everyone to the meal during a break in the action, then introduced Pastor David Vivas Jr., who provided the pre-meal blessing in a bit of a rain storm. At that point, the food served in white to-go containers started moving, getting to the needy lined up.

Hours before the event, volunteers started their duties which included cooking a hundred or so turkeys, carving them up, making side dishes, cutting pies, stacking drinks and unloading items donated from all over the community, including Delano Union School District and Delano Joint Union High School District.

Former and current city of Delano employees cooked the specially deep-pit barbecued turkeys, who watched as everyone enjoyed their culinary work.

Diners also were treated to live Mexican music — also donated for the meal.