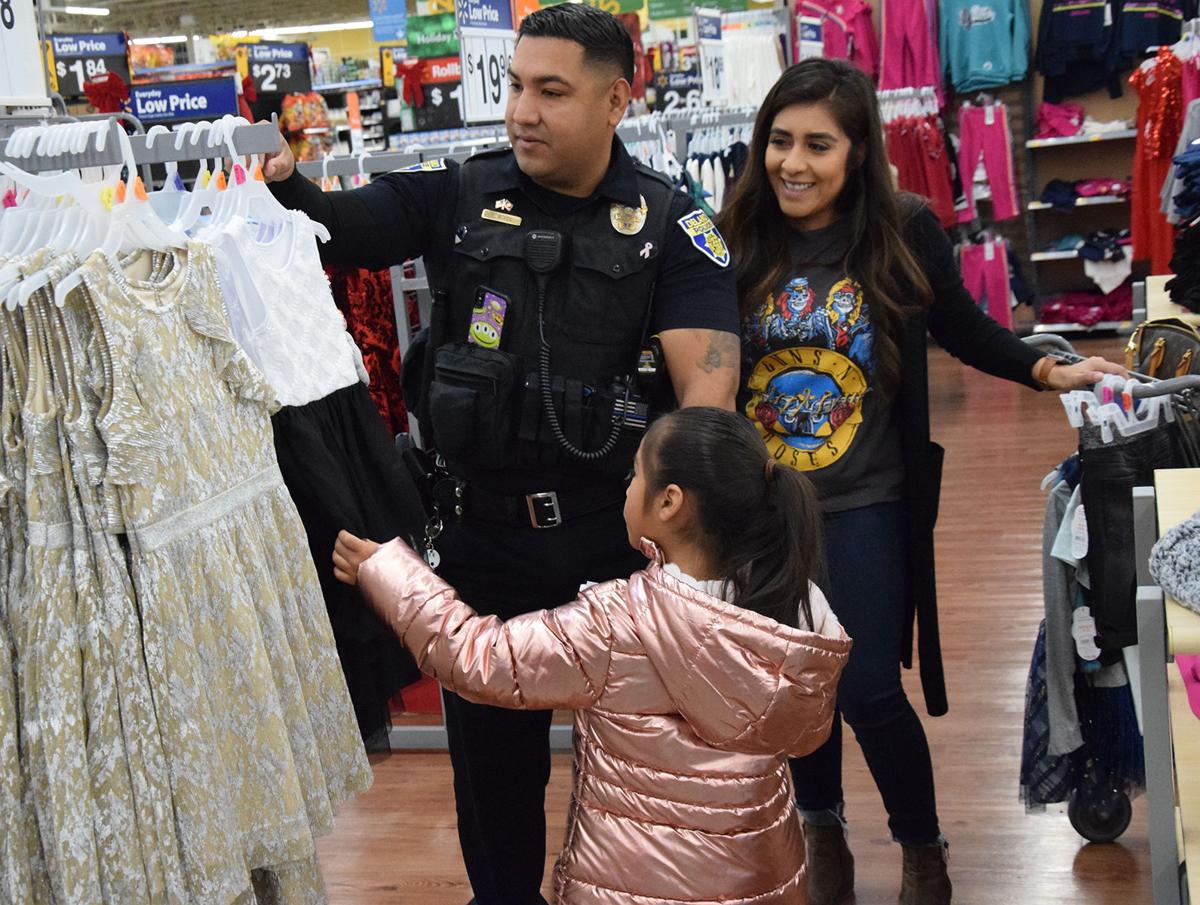 Delano police Officer Ephriam Ochoa, with his wife, help a child pick out a dress during the Shop with a Cop event on Dec. 14. 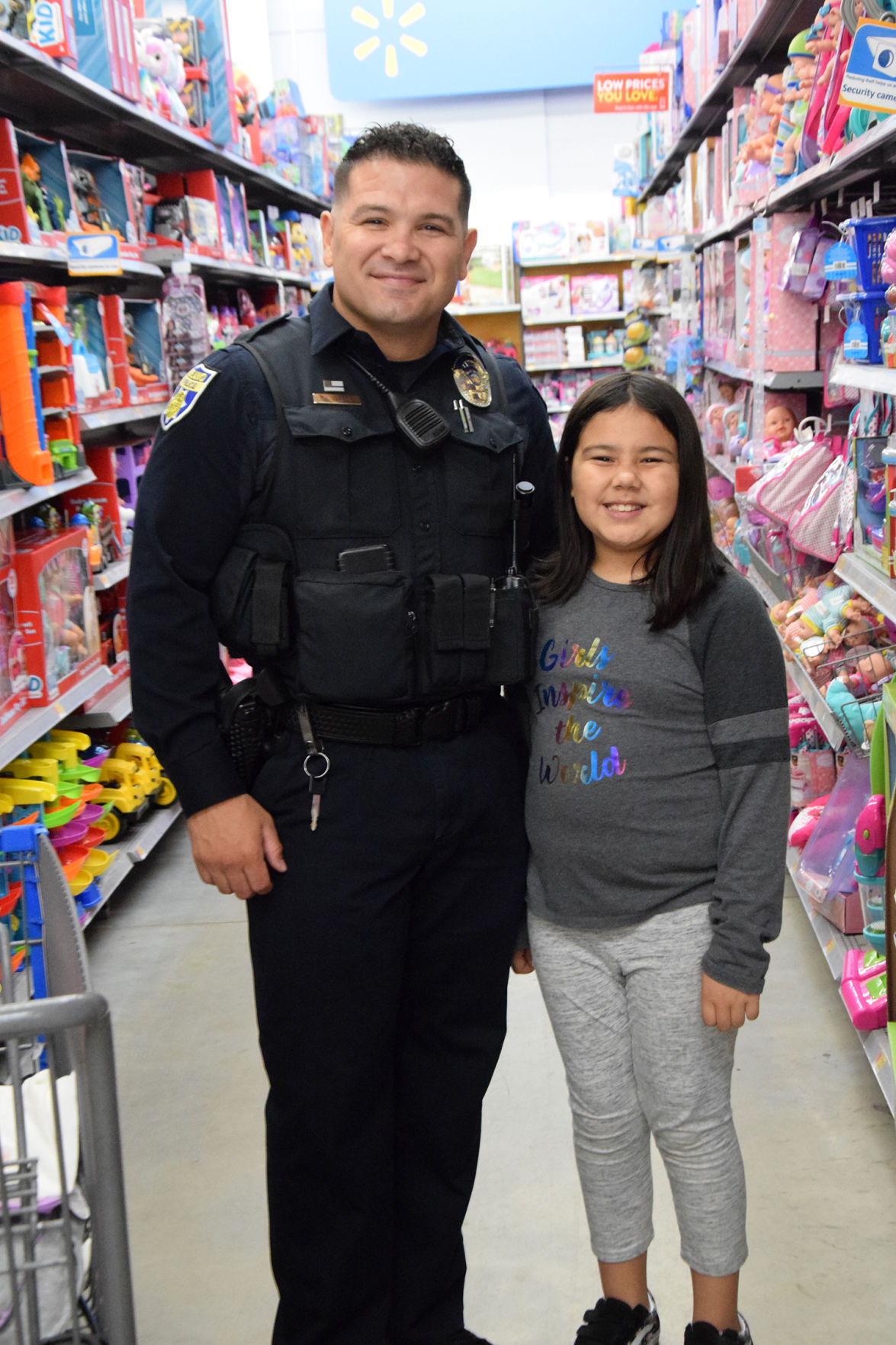 Delano police Officer Josh Salinas poses with a young girl he is shopping for during the department's Shop with a Cop event on Dec. 14. 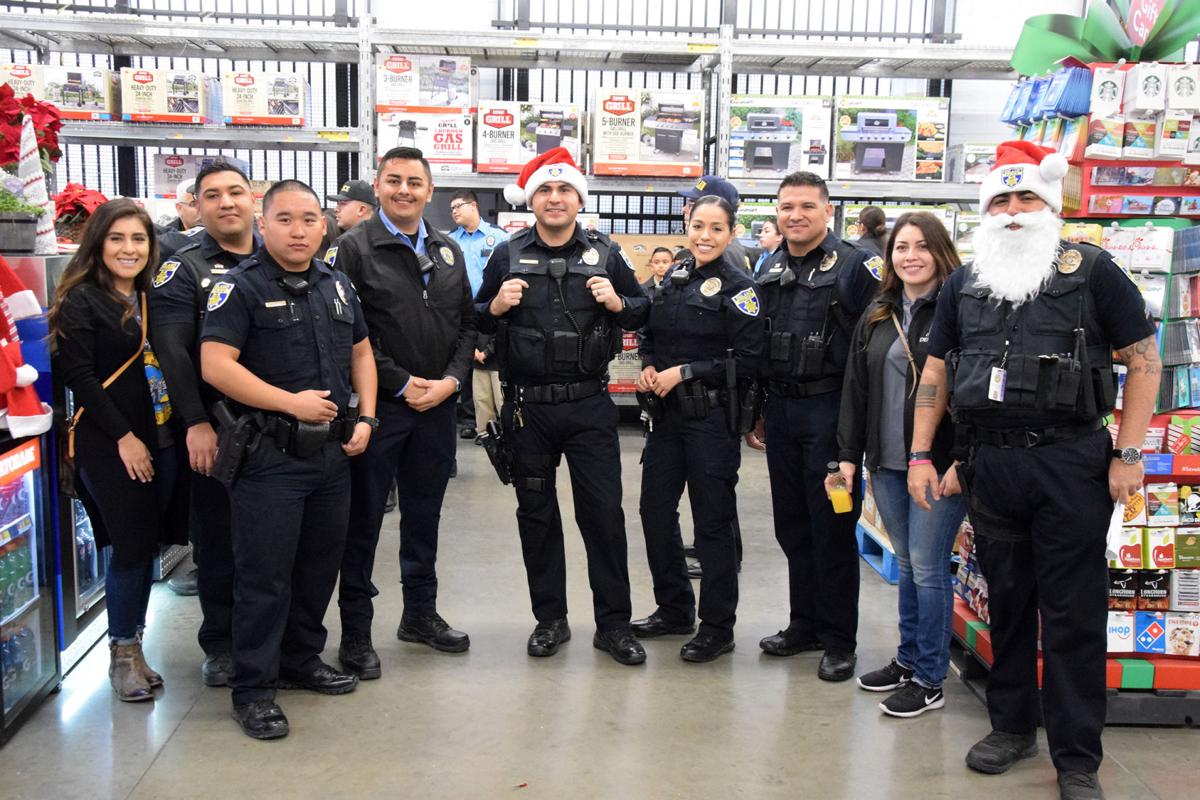 Delano police officers take a group photo ahead of the annual Shop with a Cop event on Dec. 14.

Delano police Officer Ephriam Ochoa, with his wife, help a child pick out a dress during the Shop with a Cop event on Dec. 14.

Delano police Officer Josh Salinas poses with a young girl he is shopping for during the department's Shop with a Cop event on Dec. 14.

Delano police officers take a group photo ahead of the annual Shop with a Cop event on Dec. 14.

Delano Police Department's Shop with a Cop program is a lot more than those four little words.

For Sgt. Mario Nunez, it has been a labor of love of nearly three decades, organizing an event that always brings smiles to scores of children every year.

Now, reflecting on his pending retirement from the agency this coming summer, he will hardly retire from being part of the event, which for years was held at the Delano Kmart Department store. For the first time this year it was held Dec. 14 at the Delano Walmart.

About 70 children were selected for the 28th annual Delano police event. In 2018, there were 48 kids, Nunez said.

Nunez remembers early Christmases as a young boy living in the Lamont-Weedpatch area, "when there wasn't a lot under the small Christmas tree my mom put on the counter."

"Sometimes it was only one gift apiece, or we didn't have anything," he said. "Some years, if not for (gift-giving) programs back then, we wouldn't have had Christmas."

Walmart Store Manager Jessie Lopez welcomed the families that Saturday morning in the garden section area with a huge spread of sweet treats and drinks that most took advantage of happily.

Then it was time for Nunez to make his annual bilingual conversation to the chosen children and their families.

"This is for the kids," he stressed to them. "Your child will go shopping with an officer or volunteer, and you will stay here. And don't get mad if they spend only on themselves. It's for them."

He also told them that if he caught any parent trying to interfere, they would be removed from the store.

Each child received a profile detailing clothes they need and toys they desired, and they got a $155 gift card to do just that, Nunez said. More items were going to be available at the police department later that morning, such as a box of toys to pick a toy for each of their siblings and a basket of snacks. In previous years, they provided only "real food."

"We found out that kids want snacks, too," he added. "We had some kids ask for a hot pocket as one of their gifts. They had never eaten one and had seen their classmates eating them in their lunches."

Officers were reminded that children each received two sets of clothing, underwear and socks.

"And keep track of the total, because if you go over, you will pay for it," he added.

Amazingly, Nunez said the officers and other volunteer shoppers usually go over by at least $200. "And sometimes much more."

Community service officer Rafael Silva shopped with a young girl, and he went over the budget because she wanted art supplies, after he went through her short list of clothes, shoes and a hover board.

"She wanted some art canvasses and art supplies," Silva said. He ended up donating his money, rounding up to a $300 overall purchase.

Volunteer Valerie Woodruff was still going through a young boy's clothing purchases, and the basket was more than half full.

"What do you think of this one?" she asked her special shopper, who just nodded.

"(Woodruff and her husband Steve) usually have two kids for this," Nunez said. "And they go over by more than $300. So, he's lucky to be getting quite a bit more today."

Cpl. Jose Madrigal also went over by a couple hundred dollars, while sporting a Santa beard, which he started using last year.

"It's just a bit too hard to say no," said Madrigal on his Shop with a Cop experience. "We are blessed, so we pass it on."

After each child was done, they posed for a photograph with Santa, aka Sam Pearson, a retired police officer.

"Donations came in very healthy," he said. "It allowed us to add more kids and do more stuff."