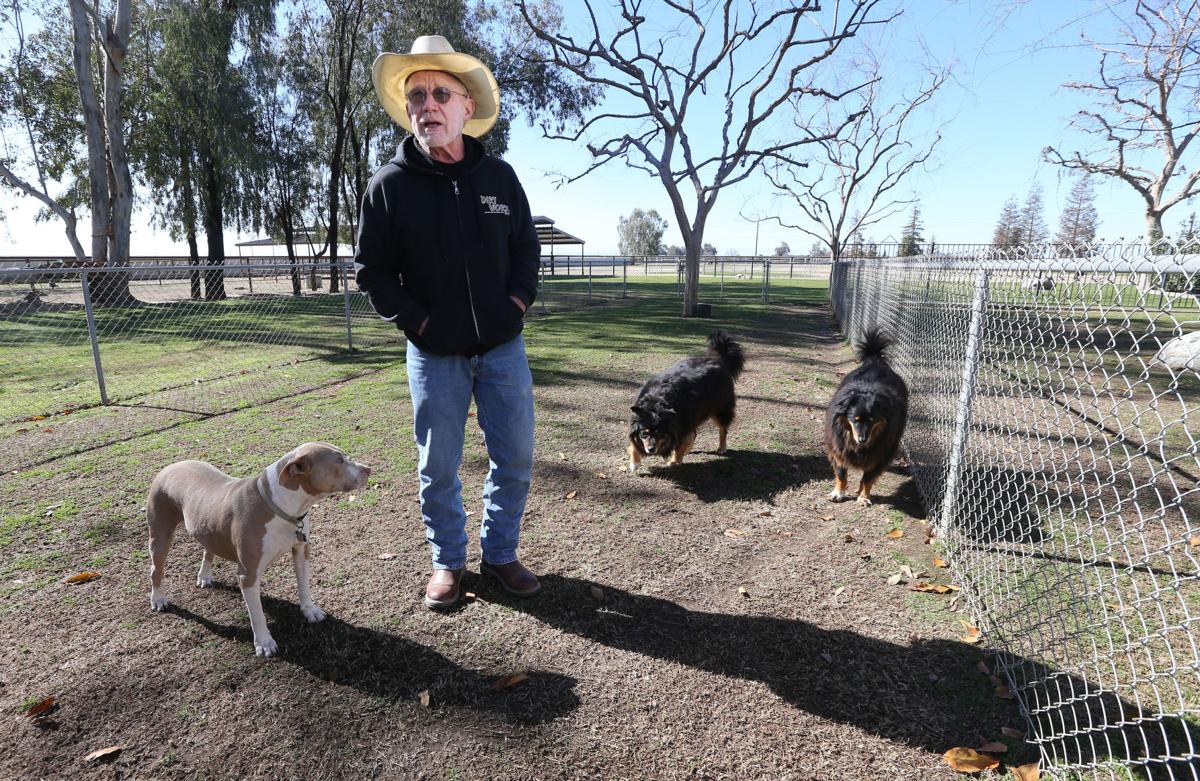 Jerry Frith, who owns a horse ranch on the far western edge of the city, on Nord Avenue, loves his rescue dogs. 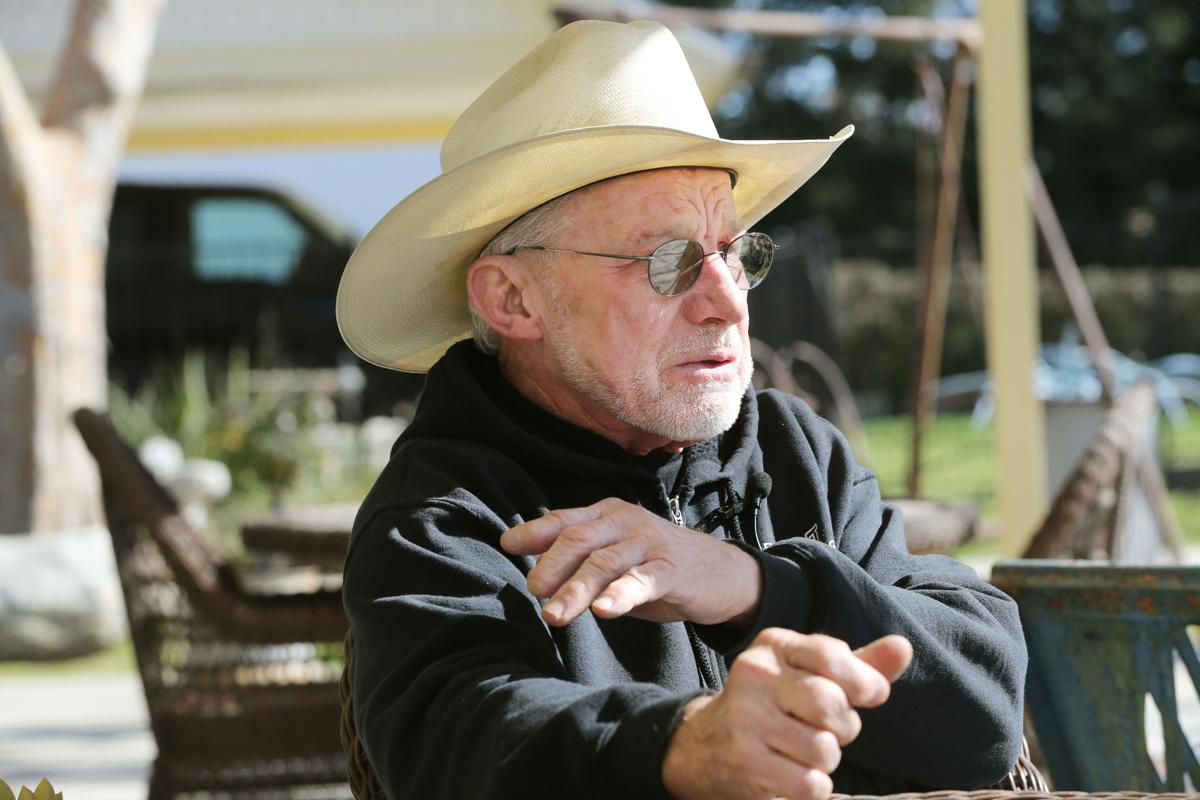 Jerry Frith explains why his once-sparsely populated neighborhood on the far western edge of the city is so special. 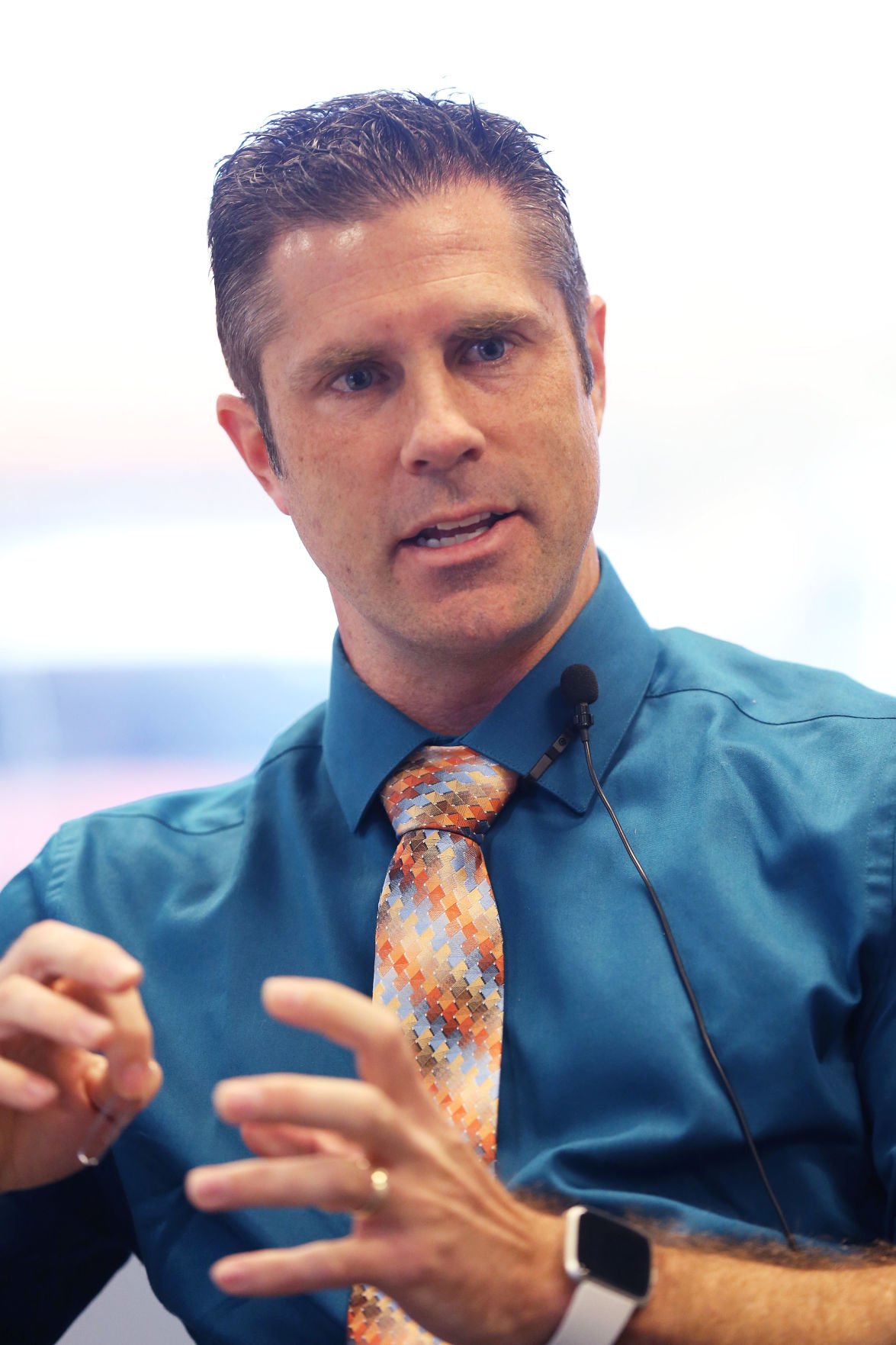 County of Kern Planning and Natural Resources Department Assistant Director Craig M. Murphy talks about the possibilities of development at the western edge of the metro area. 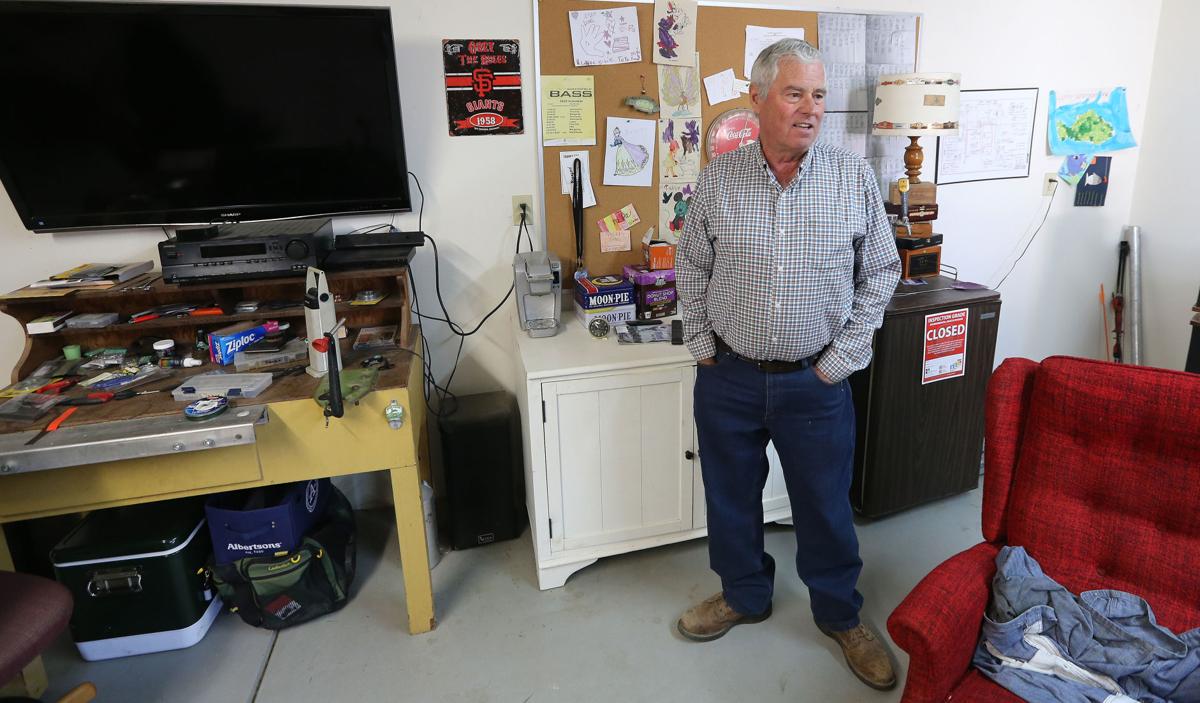 Greg Enns hangs out in his man cave in one of the garages of the rural home he shares with his wife Debbie on Brimhall Road with their dog, Barbie. 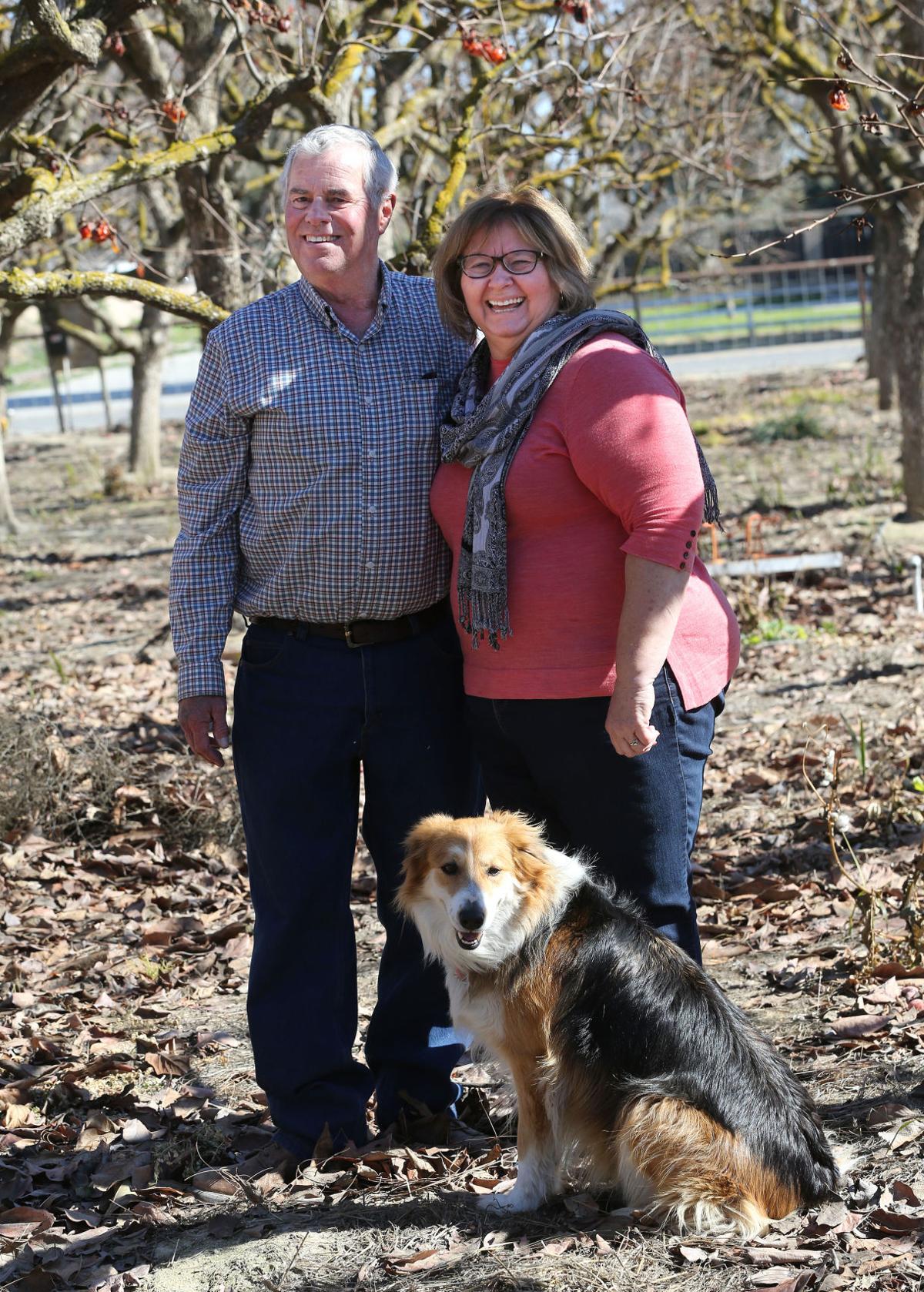 Greg and Debbie Enns, here with their dog Barbie, have a small persimmon grove at their home on the far western edge of the city. 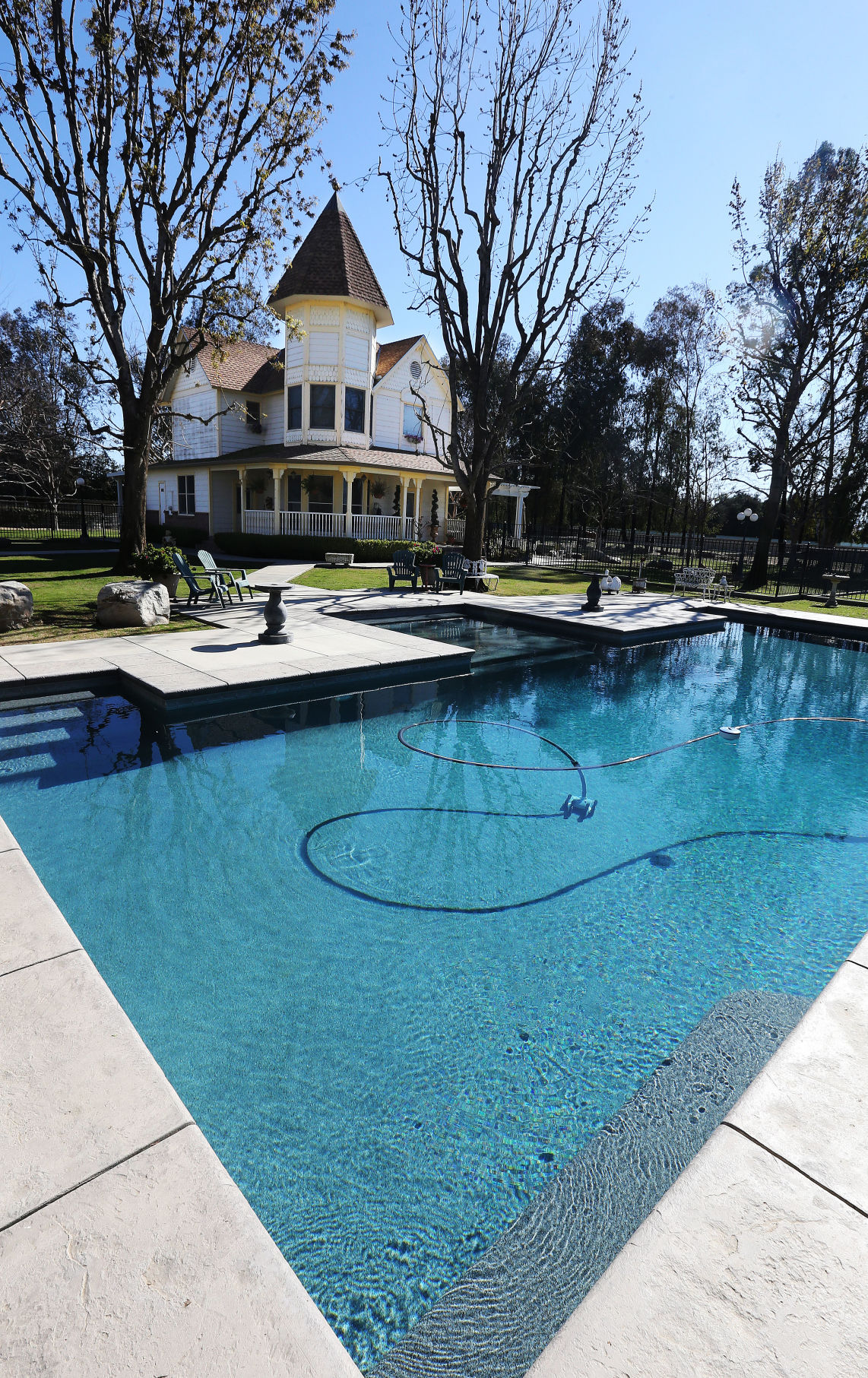 Jerry Frith and wife Kathleen own a beautiful Victorian home on the western edge of the city, off Nord Avenue. 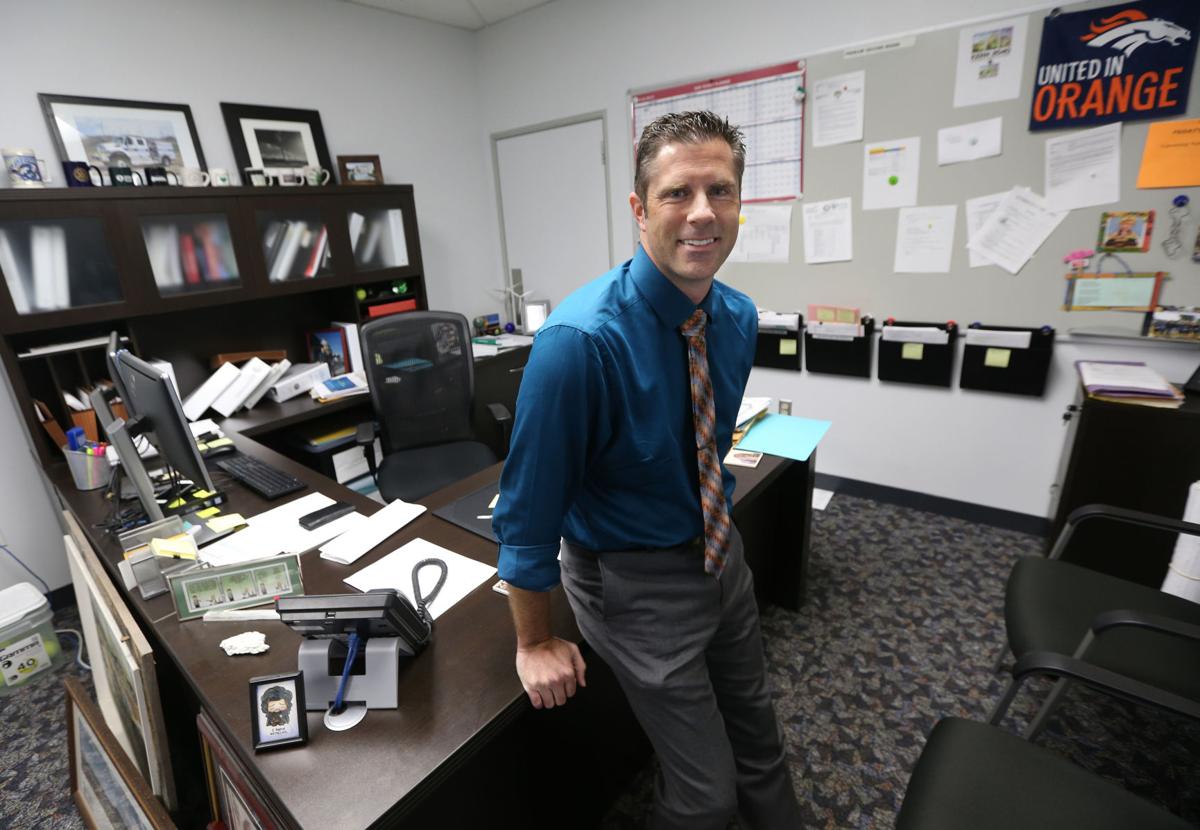 Jerry Frith, who owns a horse ranch on the far western edge of the city, on Nord Avenue, loves his rescue dogs.

Jerry Frith explains why his once-sparsely populated neighborhood on the far western edge of the city is so special.

County of Kern Planning and Natural Resources Department Assistant Director Craig M. Murphy talks about the possibilities of development at the western edge of the metro area.

Greg Enns hangs out in his man cave in one of the garages of the rural home he shares with his wife Debbie on Brimhall Road with their dog, Barbie.

Greg and Debbie Enns, here with their dog Barbie, have a small persimmon grove at their home on the far western edge of the city.

Jerry Frith and wife Kathleen own a beautiful Victorian home on the western edge of the city, off Nord Avenue.

Over the past year I've taken you along the streets, through the parks, and down the alleys of some of Bakersfield's most historic and unique neighborhoods, and I could keep going for another 10. But what about the neighborhoods of the coming decades? Where, physically, is Bakersfield headed? What will it look like in 2040? 2060? 2080?

The city will surely continue to grow in all directions, but we can be certain about one compass point in particular: west. Bakersfield is headed toward Interstate 5, and though the pace has slowed over the past decade, the inexorable march continues.

Farmhouses that were miles from the nearest grocery store two generations ago are surrounded in some areas by new development. Modest, half-century-old ranch houses have new neighbors on all sides — custom mini-mansions whose owners have taken advantage of Bakersfield's affordable property values and reasonable building costs.

One of the prices we pay is the loss of prime farmland — but then Bakersfield's decision-makers concluded three generations ago that housing trumped farming when they opted to construct the city's new state college where only carrots, corn and alfalfa had been before, instead of the city's significantly less farmable east side.

Now all bets are off, and by late century, motorists on I-5, or whatever mode of ground transportation is the norm in 70 years, might look to the east and, instead of wondering if there's more to California's ninth-largest city than a horrendously overpriced fueling oasis, actually see the city's western face, right there.

She won't live to see it, not even close, but a complete blanketing of new development to the city's western horizon one day wouldn't shock Connie Fleishauer, who has lived with husband Steve, a recently retired farmer, in rural west Bakersfield for 44 years — 15 years on Wegis Road and 29 years on nearby Nord Avenue before that.

"One day when I was a young teenager, as I was driving with my dad on Rosedale Highway, farms all around, he said, 'Connie, mark my words, one day this is all going to be houses," Fleishauer said. "He didn't live to see it, but it's coming true."

The city and the interstate are still some distance apart — 20 miles or more in some spots — but the steady, glacial movement toward their inevitable meeting goes on.

Or is it inevitable?

Kern County's assistant planning director, Craig Murphy, now waist-deep in the creation of the 2040 Plan, a planning document that lays the foundation for the region's future residential, commercial, transportation and infrastructure needs within the regulatory framework of California circa 2020, is skeptical. He has plenty to do, anyway, without concerning himself with the highly unlikely need for new sewer lines west of Enos Lane.

Residential development will probably take several decades to reach I-5, he says, if indeed it ever happens. Industrial and commercial uses might be a different story.

"People will look at it and say, 'What is growth?'," Murphy said. "A lot of people think growth means houses. Well, for part of it, yes, (but) growth also means businesses, economic development, and some of those areas (on the city's far-west edge) may be better suited for different types of growth. So, will we ever get to I-5? ... Who knows? Maybe at some point."

Residential growth won't fall short of the interstate for lack of trying on George Delfino's part.

Delfino, a third-generation farmer/land developer and president of Delfino Homes, has practiced his custom-building craft in Legacy Estates, Legacy Palms, Talladega, Manorwood, Highgate Seven Oaks and other developments on or near Bakersfield's ever-expanding western interface with the world. He says residential and commercial growth might have already reached Enos Lane — that's Highway 43 — but for one noteworthy complication.

Delfino is among those making up for lost time. He is almost ready to pounce on 40 acres of flat, uncultivated farmland at the northwest corner of Stockdale Highway and Nord Avenue that he owns as a partner in an LLC formed with relatives. He'll build houses on 80 lots.

That day, when it comes in 2022, will substantially change the western view of Jerry Frith, owner of Dirt Worx, a concrete and excavation contractor.

Frith, who lives directly across the road from Delfino's next project, prepared himself for the onslaught by purchasing enough acreage, and fencing it, to give himself a built-in buffer.

"Well, I can't do anything about it," said Frith, who calls himself a friend of Delfino's. "... That's why we kind of surrounded (ourselves with a perimeter of open land). Our house is, like, 500, 600 feet off the road. So it's one way in, one way out, and the block wall helps out. ... I can't fight what's happening. As long as (the new development) is nice, that's all we care about."

Greg Enns can identify. He has lived out on Bakersfield's western periphery for decades — and now the city has reached out to meet him.

"We've got a bunch of new houses north of us a quarter mile and a bunch more between Wegis and Nord on property we used to farm — last crop there was carrots," said Enns, who lives at Brimhall and Nord with his wife Debbie, collie Barbie and quarter-acre persimmon orchard. "Traffic is increasing. If you have to wait more than 10 seconds to merge onto Nord you know it's busy. Before, you didn't even have to look. Just step on the gas."

Fleishauer just hates to see an end to the rural way of life she has always known — and that her three now-grown children have always known. The demands of the land, after all, helped raise them to responsible adults not afraid of work.

"It's being threatened by a Muslim mosque now, right on the land where we were farming," she said. "It's not that it's a mosque — it could be a Baptist church, it could be store, could be anything, but it takes from our water, it brings traffic, and it takes away from our country living.

"We had a public hearing (over the mosque's zone-change application) a few years ago, and a man who had an established little farmhouse right near there, with horses, was at the meeting. He got up and said, 'We moved here to be in the country.' And one of the people trying to bring in the mosque said, 'Well, move.' We don't want to move away. We moved here to 'be away.'"

In a sense, though, Fleishauer has already moved. She doesn't resent the encroaching urbanization the way she once did, and she has become accustomed to the Albertsons market just a couple of miles away. Forty years ago, her mother-in-law had to drive 15 miles each way to Young's Market on Brundage Lane. So that part is nice.

But one day, she says, the Fleishauers will sell. No doubt many others are thinking the same thing.

Maybe George Delfino will want to take a look.

For practically the entirety of its existence, the city's north-south spine was the road we've been calling State Route 99. But the story of where we live is changing, and one day the people of Bakersfield — maybe it'll be our great-grandchildren, maybe our great-great — may think of Interstate 5 in that way.

Contact The Californian’s Robert Price at 661-395-7399, rprice@bakersfield.com or on Twitter: @stubblebuzz. “Where We Live,” a look at a unique Bakersfield-area neighborhood, enclave or community, has been a monthly feature since December 2018.

WHERE WE LIVE: The fight to save Oildale

A flyer is taped to the front glass doors of Wattenbarger hardware, the Oildale lumber store and neighborhood institution founded in 1946.