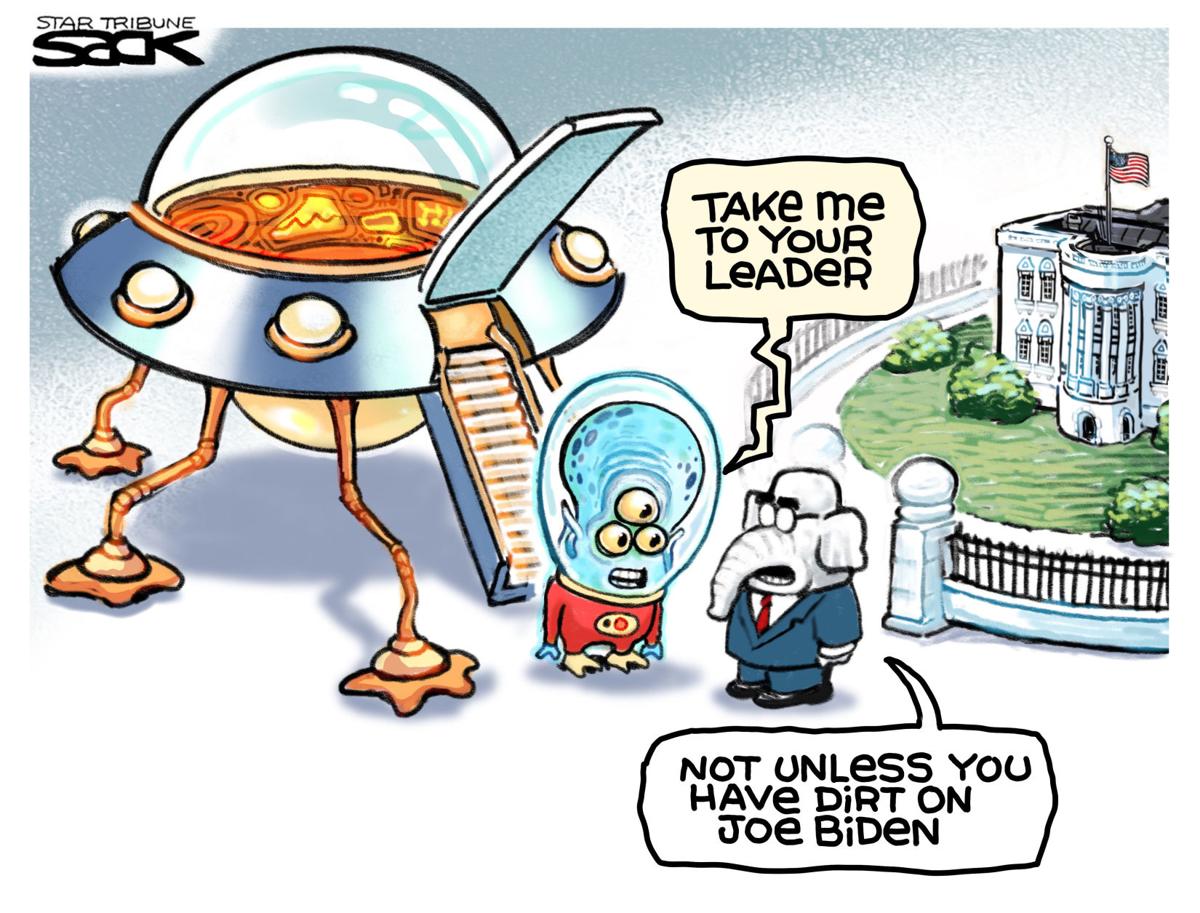 Steve Sack of the Minneapolis Star Tribune on the Ukraine controversy: Does publishing this cartoon mean The Californian supports Joe Biden? 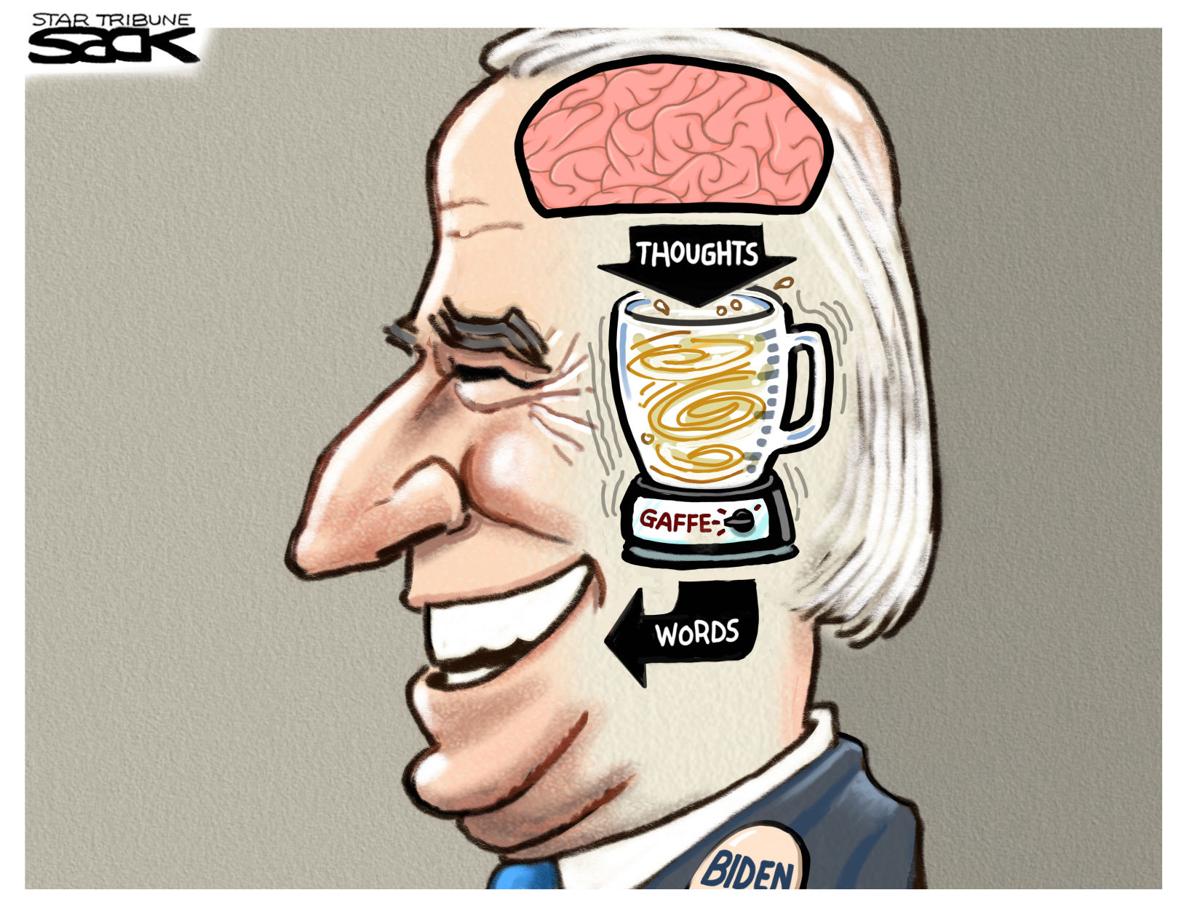 Steve Sack of the Minneapolis Star Tribune on the Democratic debates: Does publishing this cartoon mean The Californian opposes Joe Biden?

Steve Sack of the Minneapolis Star Tribune on the Ukraine controversy: Does publishing this cartoon mean The Californian supports Joe Biden?

Steve Sack of the Minneapolis Star Tribune on the Democratic debates: Does publishing this cartoon mean The Californian opposes Joe Biden?

Reader: Uh, no ("Can you imagine Bakersfield without oil? EPA does," Sept. 25). That's a big no, Robert Price. I think #Kern County should give up its oil production at the exact same time that all California citizens give up their cellphones, health care products, vehicles, bus transport, bikes, sports, computers, clothing (this could go on forever) — all petroleum products.

Because getting all of the components of our lives from Saudi Arabia and other foreign countries is not #winning. Local jobs. Local schools. Local nonprofits. Our public safety officers. All benefit. And produced using the highest standards — this is what California-produced oil and gas provides.

Loved your column on this, by the way.

Price: You're exactly right about this, Tracy: Kern County oil observes the strictest extraction standards on the planet, represents an essential component in a wide range of products and processes, and bolsters the local economy in a vital and dramatic way. Today, as a global commodity, oil is substantially irreplaceable.

But it's not completely irreplaceable. California's 32 million cars and trucks represent the state's largest category of greenhouse gas emitters. Transitioning all vehicles to electric is an achievable if complicated goal that the state fully intends to undertake. The technology (battery capacity, mainly) isn't there yet, and neither is recharging infrastructure, but the market is solid, almost to the point of thriving. Consumers and carmakers alike have bought in more quickly and enthusiastically than anyone could have expected.

Should a greatly diminished market for gasoline ever come to pass in California, the local industry would suffer tremendously and we in Kern County would all feel it. Demand for petroleum derivatives used in manufacturing should remain strong, at least, although some industries may be able to switch to other constituent ingredients. For example, transportation officials might one day look at replacing road asphalt — pretty much just oil and gravel — with a paving product made from desert sand.

Kern County has been needing greater economic diversification for decades, and that's still the case whether oil remains part of the equation or not. Today's political and environmental climate ratchets up the urgency considerably. Yes, oil is a deep-seated part of Kern County history and culture. Yes, the local oil industry has been a central contributor to the economy as a well-paying employer, as a major payer of property tax, and as a generous philanthropic citizen. But California fully intends to "manage" it out of existence.

The governor's office is keenly aware of the price Kern County — and thus the state — will pay if the localized economic contributions of the oil industry are not fully accounted for. Kern County, which has been called the Appalachia of the West, is already a net recipient of state aid. Its low educational attainment levels make it a less desirable landing spot for certain industries. If Kern County oil is truly going away, the region's economy will need a state-assisted infusion perhaps unlike anything we've ever seen. Might Sacramento help lure information technology companies to Kern County with grants, public-private partnerships or tax mega-incentives? Might the University of California team with Bakersfield College or other institutions to create a training institute capable of imbuing a new-generation workforce with not-yet-identified skills? Nothing is really on the table, which means everything is on the table.

Reader: Your Sept. 27 Opinion section has a political cartoon that is nothing more than a cheap shot. It shows an alien landing a spaceship outside the White House and telling a Republican elephant, "Take me to your leader." The Republican answers, "Not unless you have dirt on Joe Biden."

Does this mean that The Californian endorses Joe Biden telling Ukraine leaders they have six hours to fire a prosecutor that is investigating Joe Biden's son and if they don't, he, Joe Biden, will not turn over money that is supposed to go to Ukraine? Oh, by the way, the prosecutor got fired.

Price: Political cartoons are, almost by definition, cheap shots. They boil down complex issues to single punch lines. Does publishing this one, by Steve Sack of the Minneapolis Star Tribune, mean The Californian believes in Biden's complete innocence in this matter? No. Does publishing a recent cartoon lampooning Biden's bumbling performance in a Democratic debate, coincidentally also drawn by Steve Sack, mean The Californian opposes Biden's quest for the presidency? No. It means we seek out opinions from multiple perspectives, both in cartoons and syndicated columns. Apparently, Sack is also an equal opportunity cheap-shot artist.

Reader: Really good story by Steven Mayer ("Does Oildale need another supermarket? Residents say yes, please!," Sept. 23). Yes, it is important to many of us to have another choice besides Walmart. Oildale could use another market — too bad the old Alpha Beta at 731 Airport Drive is going to be our third gym instead.

In June, I sent letters about Oildale's need for more grocery stores to Aldi, WinCo, Wood-Dale Market and Foods Co. Also I sent letters to Farmer Boys, Habit Burger Grill, Blaze Pizza, In-N-Out and Checkers, inviting them all to Oildale. I have lived here 57 years and would love to see Oildale prosper.

I told them all that their companies would be perfect fits and very welcome in our community: "With our economy doing great things, it would be a win/win. Your business, with its great value, is what Oildale needs and now is the time to leap."

Price: I like to believe companies like those you've contacted actually listen to enthusiastic local residents, and I'll bet they do. You do a great service to Oildale, Fred and Linda.

Reader: My letter to Sound Off regarding fracking published Sept. 21 was not intended to criticize the messenger. I had hoped to entice The Californian to state in print that there was no known relationship between fracking and harm to groundwater. Your reporter did an excellent job of doing that. Thank you, Mr. John Cox.

I would hope that in the future, that whenever a letter or article states that such a relationship exists, that the messenger would point out that such a relationship does not, in fact, exist. That's what I hope, not what I expect. In the meantime, somebody might point this out to the governor, not that that would make any difference. His mind is made up. Politicians do not let facts get in the way of developing whatever plan they have devised. His is to destroy the oil business.

Price: We should indeed be correcting provably false claims and assumptions about fracking. Part of the problem with the fracking debate is that people confuse that practice, which involves injecting water and chemicals into the ground to crack open underground, oil-bearing rock formations, with other extraction practices that also involve injecting water underground. In the case of one such practice, naturally occurring saltwater that comes up from the ground with crude oil is then returned to the earth.

As John Cox reported this past week, a new study by the U.S. Geological Survey concludes that particular oil field activity has lowered the quality of groundwater in western Kern County, making it saltier and possibly affecting nearby irrigation sources but not harming drinking water. But it doesn't involve fracking.

Reader: In 1890, James Ben Ali Haggin and Lloyd Tevis formed the Kern County Land Co., which was purchased by Tenneco Inc. in the late 1970s, and later became Tenneco West. In 1984, Tenneco West built an office building at the corner of Ming Avenue and Old River Road, and started the development of Haggin Oaks, all in an effort to pull the city to the south and the west.

Haggin Oaks exists today because of Tenneco’s foresight. But no place in your article ("Where We Live: 25 years after the Battle of The Marketplace, Haggin Oaks is at peace," Sept. 1) is Tenneco even mentioned. Besides donating land, funding schools and many other civic activities, the southwest part of Bakersfield exists today through Tenneco’s efforts.

Do a little more research. At least a mention in your article would have been appreciated.

Price: You are correct, both on the local relevant history of Tenneco West and on the fact that I should have included it.

Reader: Valerie Schultz's Sept. 22 piece, titled "Grateful for an anniversary waltz," was really good. It meant a lot to me because it seemed to really reflect my wife and me at this point in our lives. Thank you, Valerie, for sharing these personal feelings.

Reader: Just wanted to point out to you that the foreground picture you show in your column, "Can you imagine Bakersfield without oil?," is not alfalfa, it is wheat. LOL.

ROBERT PRICE: Can you imagine Bakersfield without oil? EPA does

SACRAMENTO — The end of oil.

A new study by the U.S. Geological Survey concludes oilfield activity has lowered the quality of groundwater in western Kern County, making it…

The administration of Gov. Gavin Newsom has imposed a de-facto moratorium on hydraulic fracturing while it studies permitting procedures for t…

WHERE WE LIVE: 25 years after the Battle of The Marketplace, Haggin Oaks is at peace

For his fourth-grade science experiment, Matt Haley got himself a radar gun, sat on his driveway and, for hours at a time, clocked drivers as …

Now you will feel no rain

A new study by the U.S. Geological Survey concludes oilfield activity has lowered the quality of groundwater in western Kern County, making it…

SOUND OFF: Torrential rains might have washed away Tenneco's CSUB bid

Reader: I think you missed or didn’t know a very important incident that happened during the selection of the Cal State Bakersfield location m…

After California has rid itself of oil and all its benefits as well as its detriments (except, of course, the air pollution that will continue to invade our shores unabated from across the Pacific to mix with the smoke of our self-generated wildfires), there will of course remain the continuing war on chemical and all non-organic fertilizers and pesticides which have helped California and the Central Valley feed the world. Once this war has been won(?), along with the elimination of those nasty ruminants that help feed and clothe us but that also emit methane into our air, California will be hard pressed to feed itself, much less the world. Since the ruminants will no longer be able to provide us with natural fertilizers, the resulting harvests, further decimated by our sacrificial offering on the altar of nature's insect world, will be greatly diminished. The Utopian brave, new world looks to be very cold, dark and hungry.

Chad Hathaway will be begging for loose change downtown. Bahhahahaha