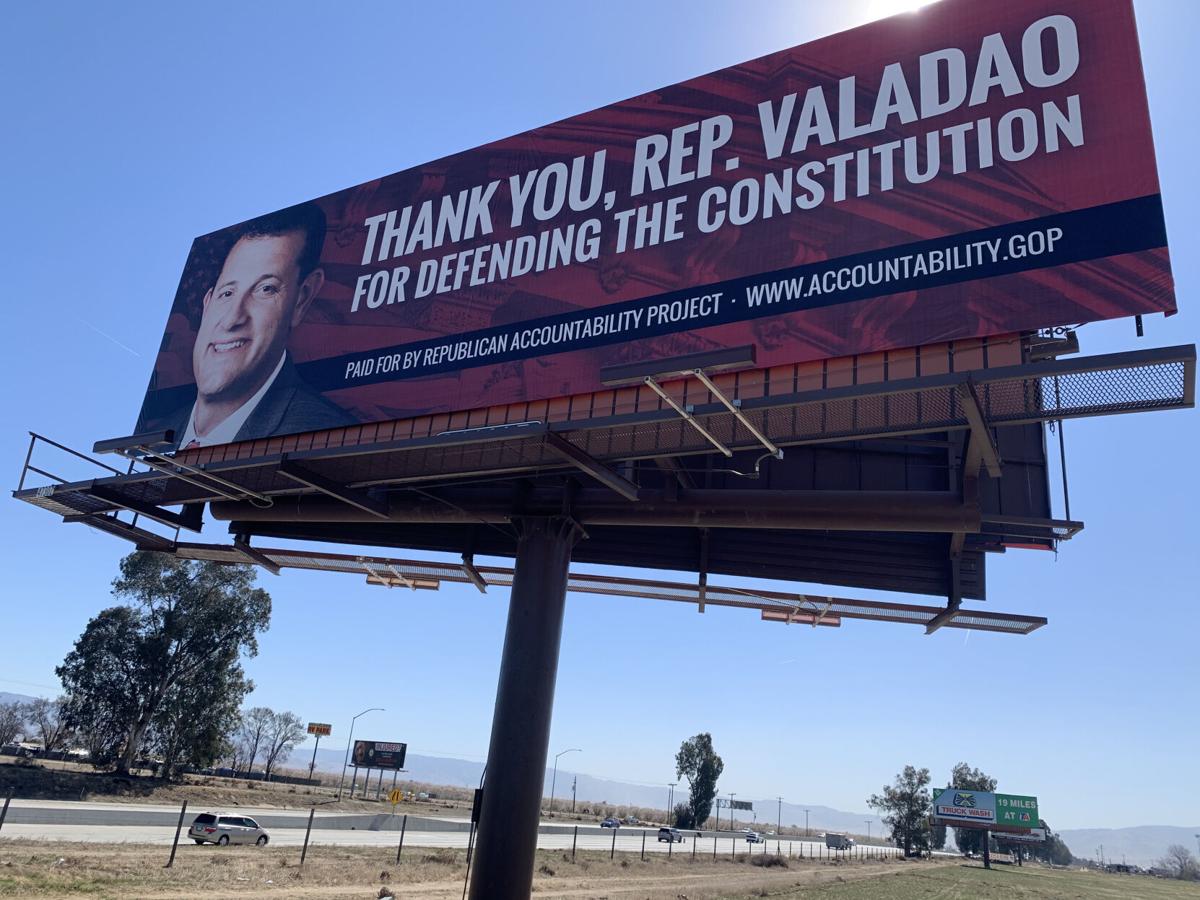 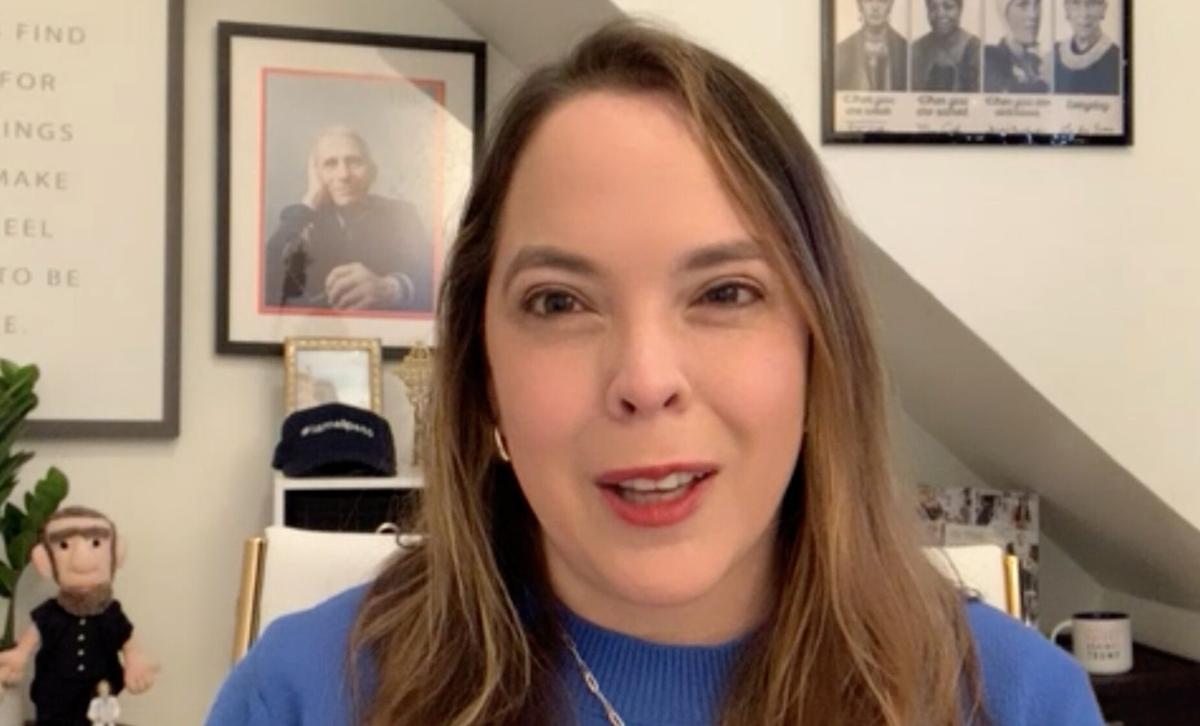 The Republican Accountability Project placed 17 billboards around the country in the districts of the legislators who voted to either impeach or convict Donald Trump, including this one in the Wyoming district of Rep. Liz Cheney, the House's third-ranking Republican.

The Republican Accountability Project placed 17 billboards around the country in the districts of the legislators who voted to either impeach or convict Donald Trump, including this one in the Wyoming district of Rep. Liz Cheney, the House's third-ranking Republican.

Well, that was a brief lull. Even more brief than usual.

Life in Congress plays out in 24-month installments and can therefore seem like a nonstop succession of fundraising appeals — one continuous, never-ending campaign.

Some candidates, once their victories are certified, might yearn for a figurative 15-minute break before the whole thing starts all over again. Perhaps some of them actually take one. David Valadao is not one of them. He can’t.

The Hanford Republican, sworn in Jan. 12 as California’s 21st District representative, got exactly one night’s sleep before returning to the House chamber and casting the most momentous vote of his life: He joined nine other House Republicans in voting to impeach Donald Trump.

“His inciting rhetoric was un-American, abhorrent, and absolutely an impeachable offense,” Valadao told me that evening.

That vote cast him as a pariah to those who would apparently allow the now-former president to perpetrate any outrage he pleases.

Valadao started finding out who his friends are.

If Valadao has lost some supporters in the past eight weeks, however, he has also gained a few — including at least one of note.

The Republican Accountability Project, an initiative launched five weeks ago by Defending Democracy Together, a group of anti-Trump conservatives led by Bill Kristol, has invested $1 million in a mass show of support for the 10 Republican members of Congress who voted to impeach Trump and the seven Republican senators who voted to convict.

The advertising campaign, which debuted two weeks ago, thanks the 17 Republican personas non grata with near-identical billboards in each of their districts: “Thank you, Rep. Valadao,” reads the one placed on southbound Highway 99, just south of Taft Highway, “for defending the Constitution.” Television spots, tailored to each of the 17, started airing on Fox News on Feb. 19. RAP also announced it will commit $50 million to support their reelection efforts.

“We have tremendous respect for the fact that he took a stand against Donald Trump knowing that it would likely (make things difficult). He put the country over his career,” said Troye, who served in the Trump administration as Vice President Mike Pence’s Homeland Security and Counterterrorism Advisor and as the vice president’s lead staffer on the White House Coronavirus Task Force.

“That was integrity,” Troye said of Valadao’s vote. “Those who do that in moments that matter deserve to have people behind them.”

RAP’s support will come in handy because Valadao’s list of Republican adversaries now goes all the way to the top.

In July 2019, Pence stumbled over Valadao’s name during a Central Valley campaign stop (he pronounced it vah-LAH-dee-oh) but Trump had no such trouble when he called out Valadao by name last Sunday at the Conservative Political Action Conference in Orlando, Fla.

A couple of boos cut through the din at Trump’s mention of Valadao’s name, but the crowd was evidently just saving up for the one that followed — “war monger” Liz Cheney, the House’s third-ranking Republican.

That’s the company Valadao keeps now, with or without strategic intent. A battle for the soul of the Republican Party is underway, and Valadao finds himself on the side that’s opposite his congressional-district neighbor, House Minority Leader and chief Trump apologist Kevin McCarthy of Bakersfield.

These days Washington has plenty of Trump apologists, even including Troye’s former boss, who barely escaped Capitol rioters calling for his neck on Jan. 6. Yet Pence doubled down on the Big Lie — alleged election fraud — in a March 3 op-ed in the Heritage Foundation’s Daily Signal. That’s just more evidence, Troye said, that the Republican establishment doesn’t fully appreciate that for Trump, loyalty is a one-way street.

Troye suggested that under more sane circumstances Pence would support the work of the Republican Accountability Project.

“I haven’t discussed it with him,” she said. “But, one on one, the traditional conservative we used to know back in the day in Mike Pence would probably be pretty proud of it and would think we were doing the right thing.”

The Mike Pence she knew might even support Valadao’s 2022 reelection bid, perhaps enthusiastically enough to learn how to pronounce his name.

Valadao, who has not commented on RAP’s support or Trump’s implied threat, and did not return my call Saturday, might be better off without Pence’s endorsement anyway, given his district’s registration breakdown. Even with a challenge from his own party coming in 2022.

Chris Mathys, who served on the Fresno City Council in 1997-2001 and hasn’t won an election in the two decades since, announced last month he’ll take a shot at the 21st District seat. Democrat T.J. Cox, who took Valadao’s seat representing the Democratic-majority district in 2018, then lost it back to him in 2020, would love to see Valadao lose a primary challenge from the right but knows better than to get his hopes up in this case.

Mathys represents Valadao’s first Republican challenger since he was first elected to Congress in 2012.

Valadao’s vote to impeach takes an arrow out of Cox’s 2022 quiver; during the 2020 campaign the Fresno Democrat had sought to portray Valadao as a clone of Trump, whom 21st District voters overwhelmingly rejected in 2016. (Surely his district’s animus toward Trump entered Valadao’s thinking as he considered his Jan. 13 vote.)

The Democratic Congressional Campaign Committee has already resorted to a new tack: It’s painting Valadao in the colors of QAnon sympathizer for having voted against efforts to remove Rep. Marjorie Taylor Greene, R-Georgia — currently Washington's foremost conspiracy theorist — from her committee assignments.

Hopefully, Cox’s looming 2022 re-rematch wasn’t Valadao’s only calculus in voting to impeach, but in matters of politics, survival instinct is never far from top of mind. Mike Pence can speak to that.