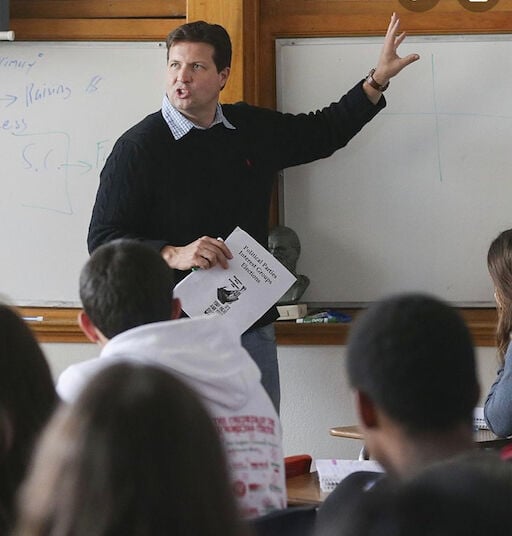 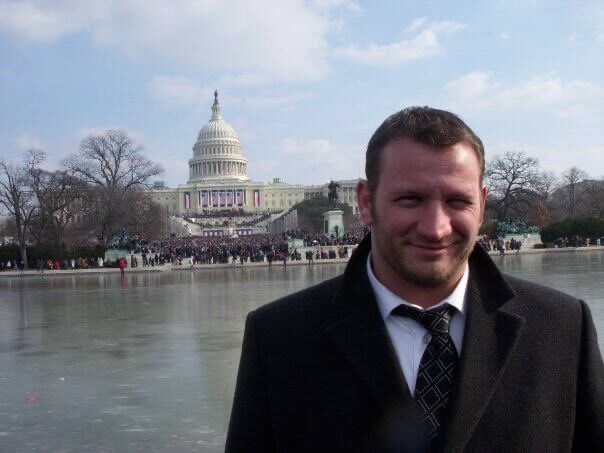 I was pumping gas in Mesquite, Nev., when I learned that the U.S. Capitol had been breached by a renegade mob. Aside from the staggering sense of dismay and anger that that previously unimaginable event provoked in me, I was struck by two things.

I had picked an incredibly inconvenient time, as a journalist, to be trapped on a freeway returning from Zion National Park.

And, if I could duck out of work for an hour the next day, I’d want to be sitting in the back row of Jeremy Adams’ government class at Bakersfield High School.

I texted him: “Should be an awesome class discussion tomorrow. Wish I could be a fly on the Zoom meeting wall.”

“You would be shocked,” he responded, by “how little they are moved by anything that actually happens.”

Turns out I wasn’t the only person who immediately realized that Adams, and civics teachers everywhere, had been gifted with a vivid, historic case study of democracy in all its fragile glory.

Whether students would appreciate it was another matter.

Adams received other notes that day as well. One, as he wrote in an essay, “After Trump, Civics Can Never Be the Same,” published last week in the website The Educator’s Room, was “a powerful but simple text message from my state assemblyman: ... ‘Your job as a civics educator has never been so important.’”

I second that assemblyman’s opinion.

But, as Adams also noted, the “national calamity was not as shocking as it should have been.”

Adams has a point: We should have seen the events of Jan. 6 coming — and I’m not just speaking on behalf of the Capitol Police.

“For years, educators have wondered if our colossally deep level of civic ignorance would have a day of reckoning,” Adams wrote. “... We wondered if there was a price to pay when citizens don’t know anything about the Founding, the Civil War, or much about current events. We wondered how a republic could long endure when at least a third of its citizens cannot name a single branch of government.”

And yet almost 160 million Americans voted. Once apiece. But I digress.

We paid for our ignorance that day with a loss of collective national confidence, self-esteem and sense of security, to name just a few damaged values. We should be thankful we did not pay more dearly.

I don’t know about you, but I’ve always taken sort of a nationalistic-lite satisfaction in knowing I was a citizen of a country that other countries looked upon with admiration, envy or both. Ask any immigrant. We were what others aspired to be, even if we ourselves hadn’t yet fully achieved that ideal, whatever it might be. The key word is “yet” — because, I think, many of us believed we would inevitably get to that place as a country. A Manifest Destiny not of ever-westward territorial expansion but of enlightened justice.

I haven’t felt that way for a while. And on Jan. 6, I felt farther away from that place than I’ve ever felt in my life.

James Maddox was offended, too.

Maddox did not relish sharing that revelation. But it had hit him hard.

“I've been very, very fortunate in my career,” he said. “I got a chance to go work with Kevin McCarthy's office for a summer as a congressional fellow. So I spend a lot of time in the Capitol and around the Capitol Complex. And that place — that place holds a special, special significance. And then to see what transpired on the 6th was extremely discouraging.”

How do we repair this?

With a renewed appreciation for teachers like Jeremy Adams and James Maddox, yes, but also by collectively turning away from incivility. Civility doesn’t help anyone remember the three branches of government or the opening line of the Gettysburg Address, but it does weaken the walls of our individual echo chambers, reduce our reluctance to talk with a measure of respect to each other again and, maybe eventually, help us grasp the value of that elusive but essential concept: objective truth.

No matter which candidate you supported for president, I hope we can all agree on one point Joe Biden made Wednesday on the inaugural platform of the U.S. Capitol, a place debased by lies just two weeks before.

“Recent weeks and months have taught us a painful lesson. There is truth and there are lies. Lies told for power and for profit. And each of us has a duty and responsibility, as citizens, as Americans, and especially as leaders — leaders who have pledged to honor our Constitution and protect our nation — to defend the truth and to defeat the lies.”

We’re a long way from accepting Biden’s simple, undeniable words in unanimity, though — not because they’re not true, but because it was Joe Biden who spoke them.

We’re a long way from accepting Biden’s words in unanimity because we have evolved into hardened factions that, despite all our high-sounding platitudes, matter more to us than country.

People like Adams and Maddox have their work cut out for them. But then we all do, those of us who care — and I like to think that’s a lot of people.

Adams’ government class has moved on to the economics part of the school year curriculum, so he didn’t deal much with Biden’s inauguration this past week. The nature of Zoom lectures and online classroom interaction changes the dynamic of give-and-take debate, so Adams isn’t able to interject humor or irony quite the way he did when he taught my two.

He said he needed time to process the events of the past month anyway.

Maddox agrees. This will take time to understand.

“I encouraged my classes to try to learn about this,” said Maddox, referring to the Jan. 6 siege. “This is something that historians and political scientists are going to be looking at for years — and because you're reliving it in real time, don't think that you can possibly understand it.

“Whatever dispositions and sentiments you're bringing into the analysis — don’t. Don't use those events on Jan. 6 to say, 'well, that proves my point.'”

The two government teachers know this much: We must find a way as a people to define and accept objective truth.

As Adams said, “You can’t govern yourself as a nation if you don’t have a shared reality.”