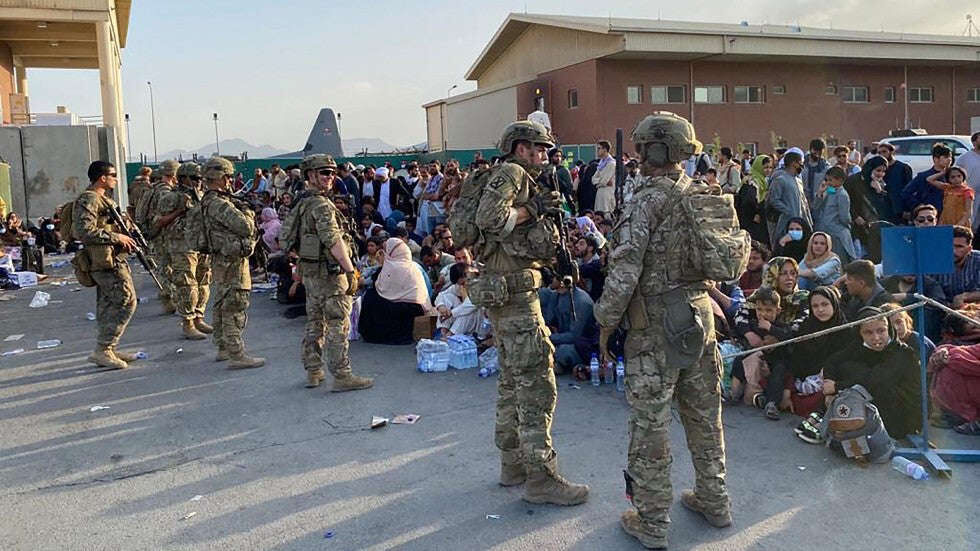 Army Staff Sgt. Jarred Jensen, of Bakersfield, and members of his squad stand watch over worried Afghan citizens last week outside the U.S. Embassy in Kabul. Jensen is not permitted to specifically identify himself in this photo, per his superiors. 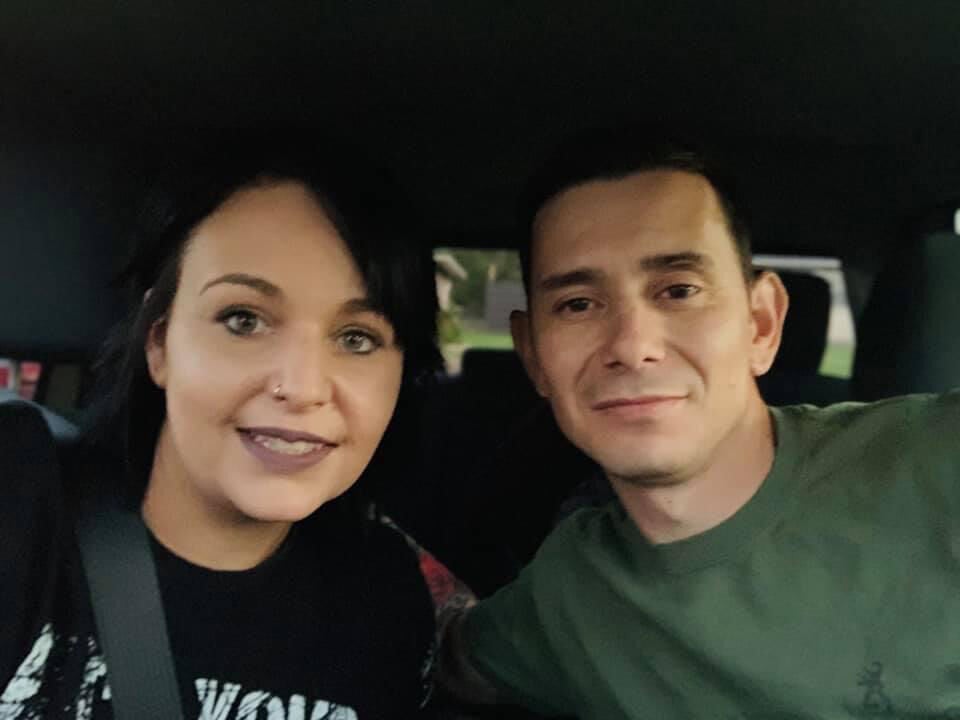 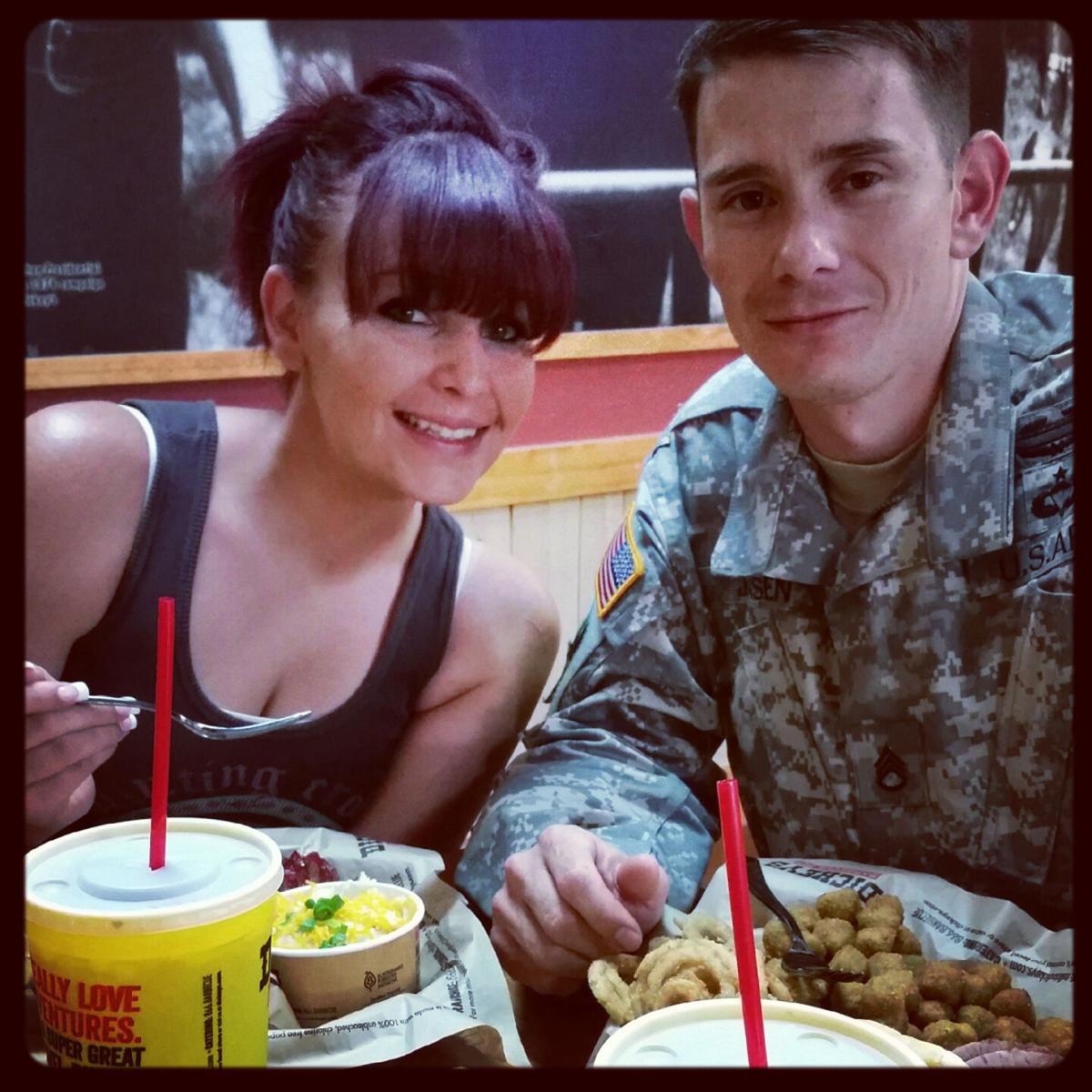 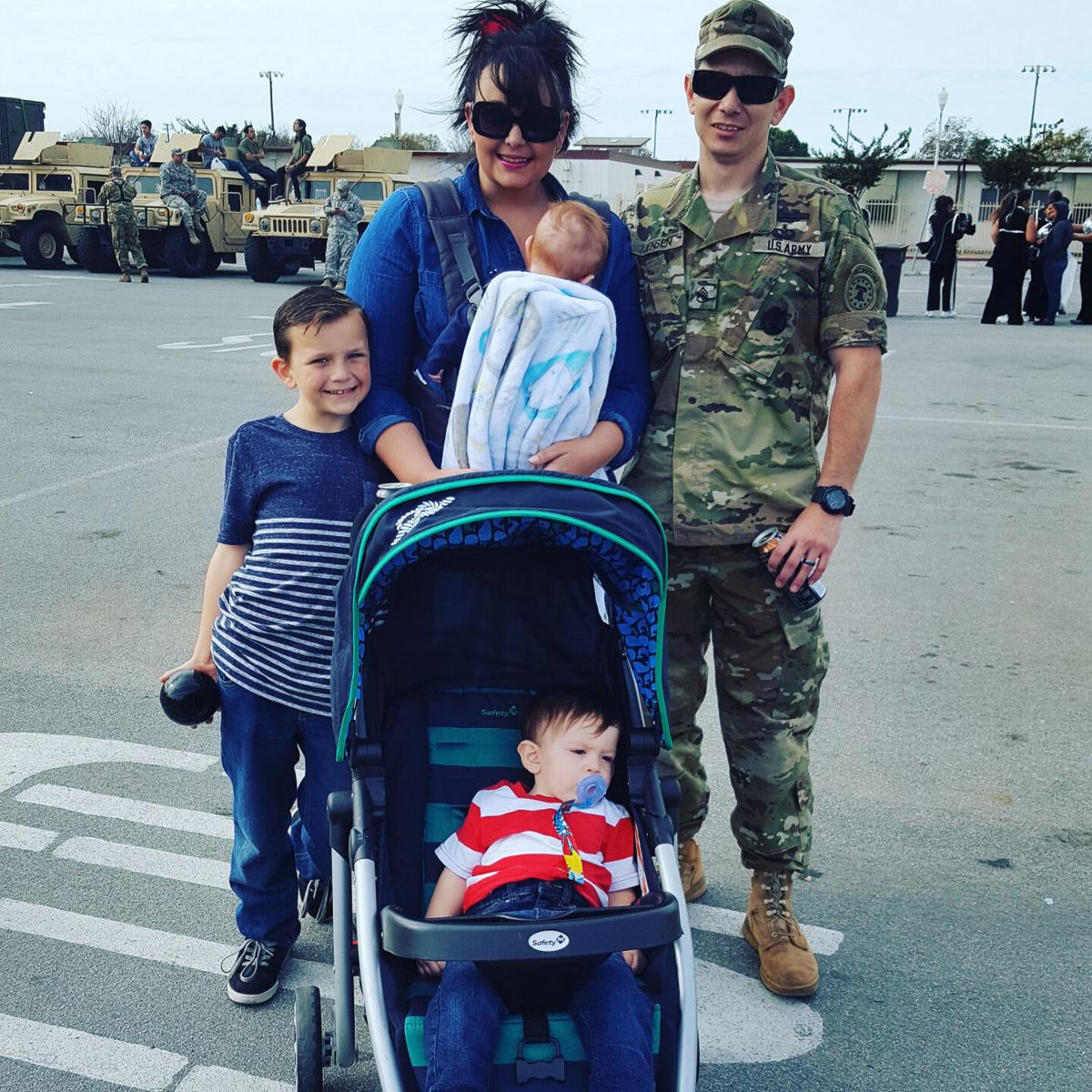 Army Staff Sgt. Jarred Jensen, of Bakersfield, with his wife, Chelsea, and their three boys.

Army Staff Sgt. Jarred Jensen, of Bakersfield, and members of his squad stand watch over worried Afghan citizens last week outside the U.S. Embassy in Kabul. Jensen is not permitted to specifically identify himself in this photo, per his superiors.

Army Staff Sgt. Jarred Jensen, of Bakersfield, with his wife, Chelsea, and their three boys.

Jarred Jensen wasn’t in Afghanistan when, in October 2001, the U.S. military swept in to avenge the single most devastating terror attack on U.S. soil in history.

He would have been in the eighth grade.

Jensen wasn’t called upon to participate when, in May 2011, an elite squad of U.S. Navy SEALs took out the mastermind of the 9/11 attacks, Osama bin Laden.

But when the time came to literally turn out the lights at the U.S. Embassy in Kabul last week, no doubt with remnants of shredded classified documents wafting through the frantic, electric air, he was there.

If Army Staff Sgt. Jarred Jensen didn’t personally lock the door on his way out, someone from his platoon, part of the 10th Mountain Division, did.

We won’t know some of that minutiae for a while because Jensen, a 2006 Foothill High grad, is currently not in a position to explain it. And won’t be for some time.

For now, we must leave it to family members to describe, as best they can, what’s happening in that week-old photo snapped of Jensen and eight or nine of the camouflage-wearing, helmeted subordinates from his squad outside their country’s embassy in the besieged Afghan capital.

In that photo posted to Facebook, they’re standing watch over perhaps 200 Afghan men, women and children hoping for protection, guidance or, preferably, a ticket out of a city teeming with people — reportedly thousands of Americans and Britons among them — with the same desire.

The Taliban overran the entire South Asian nation of 38 million people, a place about the size of Texas, in 11 days — not three months as the U.S. government had apparently expected. And now the city has a political, military and humanitarian crisis the likes of which we have not seen since — sorry, Mr. President — Saigon 1975.

And Staff Sgt. Jensen, 33 in October, will have stories to tell upon his return to Bakersfield, whenever that might be — most likely after stopping first in Louisiana to snatch up his 33-year-old wife, Chelsea Patrick Jensen, a 2006 Stockdale High graduate, and their three boys, who wait anxiously for his return from the safety of their placid 2½ acres south of New Orleans.

Until that time, Jensen, one of 6,000 U.S. troops currently on the ground in Afghanistan, will be vacationing at the swanky Kabul airport, eyeing Taliban soldiers and men who look like they might be Taliban soldiers just outside the fence. U.S. military personnel on-site are working against an Aug. 31 deadline to defend (without engaging, if possible) and ultimately evacuate until someone tells them differently. Which would not be shocking, given the tense and ever-changing circumstances.

Jensen has been giving his wife of eight years brief, infrequent and redacted updates. Some details she is happy to hear, some not so much.

“He was excited to get a shower,” Chelsea said, conveying one of the highlights of her 4 a.m. conversation with her husband early Saturday morning. “He FaceTimed me the other day and he had an inch layer of dirt on him. So he was happy to get a shower (Friday) — first one since Aug. 6. He’d been eating MRE (canned field rations), too, and he finally got a hot meal yesterday. So I was happy to hear all that.”

But not so happy to hear about his oh-dark-thirty stroll through the streets of Kabul after the embassy had been evacuated and secured. His platoon walked the 8 miles from the abandoned U.S. compound to the Kabul airport in the middle of the night. What might normally take 100 healthy men an hour and change took nearly three hours: Darkness, a bleak, unfamiliar landscape and the very real possibility of hostile fighters lurking in windows and around corners, made them vulnerable and, therefore, hyper-cautious. They made it safely, all of them.

This was after Jensen’s platoon, hours earlier, had first secured the roof of the U.S. Embassy and then started bringing up embassy staff and other civilians, including representatives of coalition forces. While their evacuation was taking place, one helicopter at a time, some soldiers took up positions below, holding steady — and taking some fire — while others went door to door, room to room, making sure everyone was out. When it was time to leave, they did what infantrymen do and hoofed it.

There is relative calm at the moment, but, as has become abundantly clear, things can change. Already have.

“He already had an idea of what he was going to do when the Army told him where he was going” in early August, said Jensen’s mother-in-law, Chelsea’s mother, Margo Ivester. “But nobody really knew how bad it was going to go and how fast. I mean, we knew it was gonna be bad ...

“When he got there, it looked like everything was going to be pretty chill, but within 24 hours they were running for their lives.”

Granted, the Afghans were mostly the ones running for their lives. Video of Afghan citizens running down the tarmac alongside departing U.S. aircraft, in some cases clinging to wings and undercarriages, will be some of the defining images of this chaotic debacle.

Ivester’s husband of 10 years, Brent Ivester, is a retired Army major who upon his separation from the service worked as a military contractor, serving for a period of time as a coalition forces trainer in the Middle East. He’d been to the U.S. Embassy in Kabul five years earlier and understood the lay of the land well enough to grasp Jensen’s challenge.

And he believes Gen. Mark Milley, chairman of the Joint Chiefs of Staff and the principal military adviser to the president, was “overridden” in the U.S. disengagement plan.

Jensen is serving his second enlistment in the Army. He was with the 82nd Airborne for seven years, then retired to work as a recruiter.

After four years, he took a job as a police officer in the gang-plagued Santa Cruz County town of Watsonville but quit after a year and a half. In 2019, he reenlisted in the Army, this time with the 10th Mountain.

This is his fourth deployment to that dangerous part of the world — his second to Afghanistan after two deployments to Iraq.

And this deployment, he told his wife, is the “most chaotic he’s ever seen.” He told her he hopes the evacuation mission is complete in the next two weeks.

Apparently he is an optimist.

Jensen has enlisted indefinitely so Chelsea doesn’t know when she and the boys (Jayden, 13, Ryder, 6, and Remington, 5) will get him back on some kind of semi-permanent basis, but she's certain of one thing.

“I’m kind of over all the dangerous jobs,” she said.