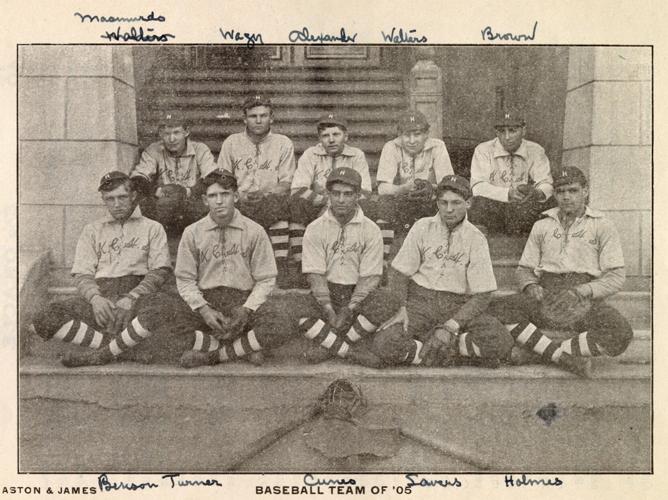 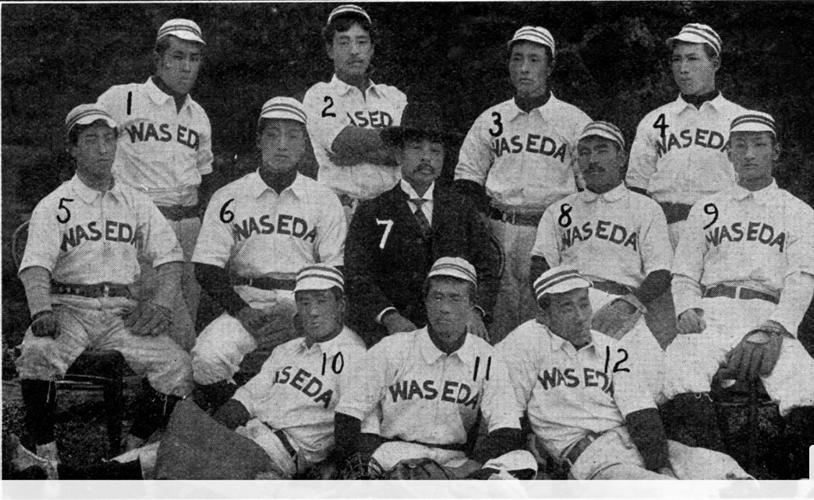 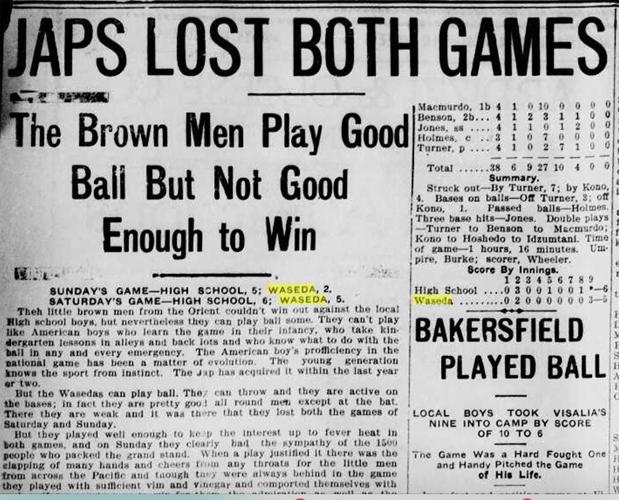 The Californian reported the outcome of the Drillers' May 27-28 games against Waseda: "The Brown Men Play Good Ball." 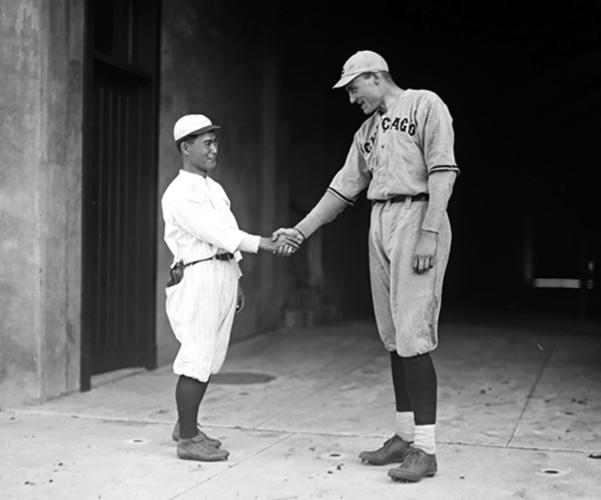 A University of Chicago baseball player greets an opponent from Waseda in 1911. 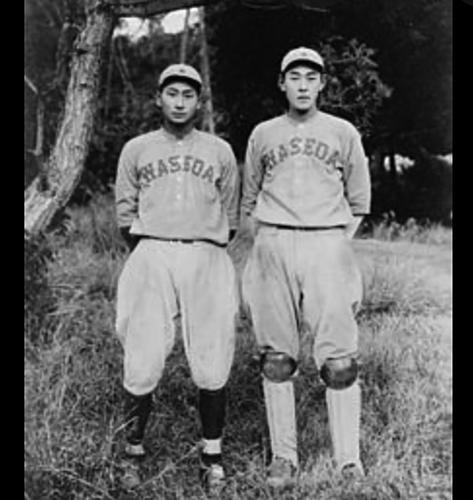 Players from Japan's Waseda University on one of their tours of the United States. The university sent a succession of teams to the U.S. starting in 1905, the year they played against Kern County Union High School. 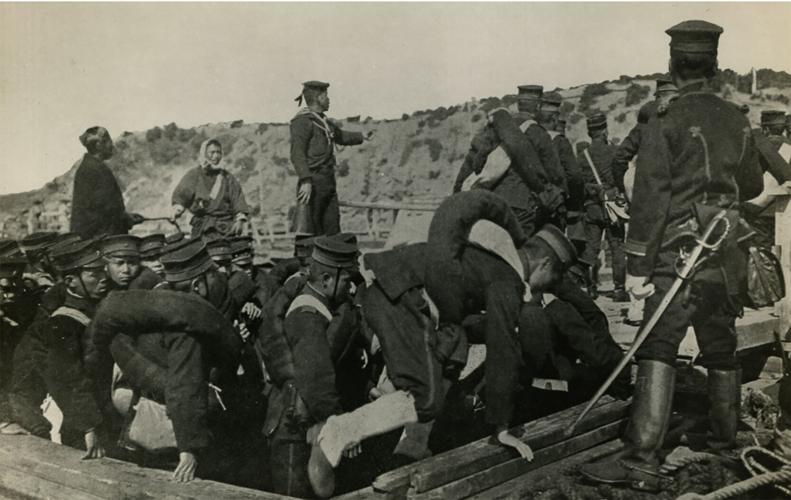 The day the Waseda team pulled into the Baker Street train station, headlines in The Californian chronicled the brutal conclusion of the Russo-Japanese War. Japanese soldiers at the front in 1905. 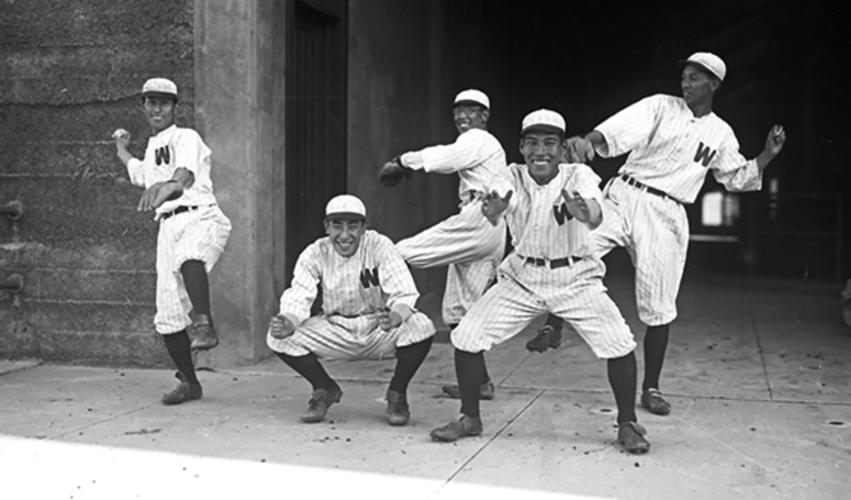 Waseda players ham it up during a 1911 tour of the United States. 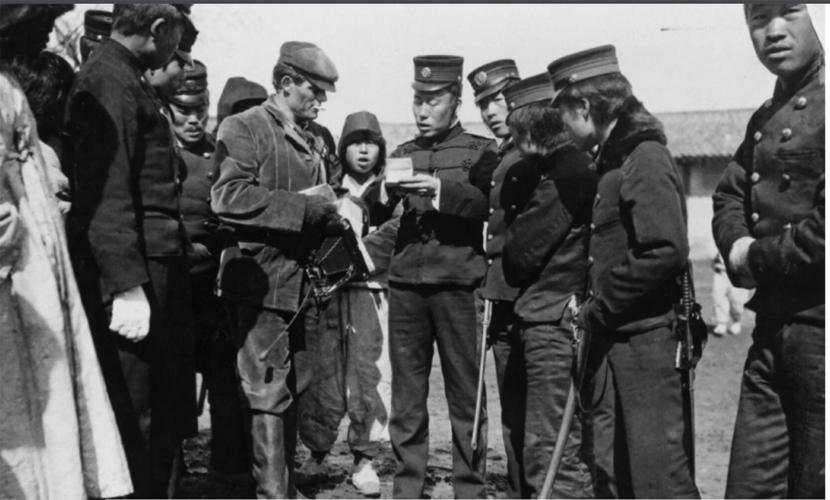 The Californian reported the outcome of the Drillers' May 27-28 games against Waseda: "The Brown Men Play Good Ball."

A University of Chicago baseball player greets an opponent from Waseda in 1911.

Players from Japan's Waseda University on one of their tours of the United States. The university sent a succession of teams to the U.S. starting in 1905, the year they played against Kern County Union High School.

The day the Waseda team pulled into the Baker Street train station, headlines in The Californian chronicled the brutal conclusion of the Russo-Japanese War. Japanese soldiers at the front in 1905.

Waseda players ham it up during a 1911 tour of the United States.

A few hours from now, a team of professional football players will revel in the glow of a fresh Super Bowl victory, hugging wives, teammates and perhaps even despondent opponents beneath a cascading shower of confetti.

Across the land, television viewers will gather up their half-empty bowls of potluck guacamole and triple-layer bean dip, nod appreciatively to their hosts and shuffle toward the door. Some will stay behind a few extra minutes to wallow in the early throes of football withdrawal.

With no football to watch, and Major League Baseball negotiating a player lockout that could delay or cancel the season, challenging times will have indeed descended upon the irrationally dedicated fans among us. Maybe a baseball story will help.

Well, not just a baseball story. A story of fellowship and generosity, outfitted in the loose wool flannel of 1905 and played in Bakersfield against an ominous world backdrop that would color the next century.

It was not the first time, and it would certainly not be the last, that sport and war overlapped, whether on a global or, as in this case, a localized scale.

It was May 26, about mid-day, when a train pulled into the Southern Pacific railroad station at Sumner and Baker streets and an unusual menagerie emerged from a passenger car: A dozen young Asian athletes and a 40-year-old man in a bowler hat.

His name was Abe Isoo, and the dozen 20-year-olds who trailed after him were members of the Waseda University baseball team. The Tokyo-based research institute had taken up the American sport only a decade or so before but had already developed a rivalry with another Japanese university, Keio. Isoo, a professor of sociology and ethics who studied at Trinity College, Conn., in the 1890s, had convinced the university president that a tour of the United States, with games against the generally superior Americans, would sharpen his team considerably. And he was right.

The Daily Californian chronicled the Japanese team’s visit to Bakersfield using terms we might today find offensive or patronizing, but they were framed in admiration and even affection.

The Wasedas would play two games against Kern County High School, take a tour of a Bakersfield oilfield, visit the Stockdale Ranch, and then go on to the next city.

“The little brown baseball players were met at the station by Manager Alexander of the High School team and a large number of members of the local Japanese colony,” The Californian wrote in describing the scene. “The team went at once to the Southern (Hotel) to enjoy a much needed rest. Manager Abe was seen at the hotel by a Californian representative and expressed himself as being greatly impressed with the wide awake appearance of the city.

“The Japanese’s manager, who speaks faultless English, has preserved the traditional Japanese courtesy in receiving a visitor and the interview was most entertaining.

“‘My players have improved greatly,’ he said, ‘since they came to America. They had great trouble with batting when they first came but they have improved a great deal and are no more puzzled by curved balls.’”

After a few minutes of conversation Waseda’s star pitcher, identified only as A. Kono, walked by. The reporter stopped him and engaged him in conversation.

“Kono, the Japanese twirler, was the personification … of good nature,” The Californian wrote. “It took some close questioning to get him to admit he had mastered at least the rudiments of the ‘spit-ball,’ which Rook of Stanford taught him how to throw.”

Yes, the Japanese team had already played at Stanford, losing 9-1 and 3-1 to begin its 26-game, three-month West Coast tour. By the time they arrived in Bakersfield, the Wasedas had been playing almost daily for three weeks, improving enough to win several times, including 13-6 over the University of Southern California. They would play only one high school team on the entire trip – Bakersfield. (And, yes, the newspaper referred to the school as “Bakersfield.”) But what a Bakersfield team: That year the Drillers defeated Dinuba 9-0, Hanford 8-0, Porterville 11-0, Visalia 3-0 and Tulare 26-0.

That first night, members of the local Japanese colony hosted a banquet in honor of the Waseda players at the Toyo restaurant. They surely talked baseball, of course, but another topic had to have come up, if not dominate: The Russo-Japanese War, which had captivated the world for more than a year and was now coming to its climactic conclusion. The fighting on land and sea had been confined primarily to Southern Manchuria and the waters around Korea, Japan, and the Yellow Sea, but its implications for the century ahead were so profound – the Bolshevik Revolution and World War I would follow scarcely more than a decade later, and World War II just 20 years after that – historians would eventually refer to it as “World War Zero.”

And now, in the very same edition of The Californian that reported the arrival of the Waseda team on page 8, front page headlines were setting the stage for the war’s final, decisive battle. Marshal-Admiral Togo Heihachirō of the Imperial Japanese Navy was hunting the wounded Russian fleet, low on coal, as it made a last, desperate dash for its eastern port of Vladivostok.

The first game between Waseda and Bakersfield was played the next afternoon, a Saturday at Recreation Park. Some 200 seats had been reserved in the grandstand for local Japanese, and the stadium was festooned with Japanese flags and bunting.

It’s possible the Bakersfield cheering section included a sophomore boy by the name of Earl Warren who, as governor 37 years later, would greatly impact the lives of Californians of Japanese descent.

“Little red-headed Charlie Turner” was the Drillers’ starting pitcher. “Turner, who is to manufacture the crooked ones that will be dished up to the Japs, is in the best possible trim,” The Californian noted. The Japanese pitcher, A. Kona, was described as small, brown and wiry, capable of throwing with a velocity that belied his short, 24-inch arms. He was also in “fine trim.”

The Drillers took a 6-2 lead into the ninth inning but then the visitors rallied to score three runs. Suddenly the outcome was in doubt. But then “Turner, in a superb exhibition of nerve, steadied the high school boys, who showed evidence of going to pieces,” The Californian reported. Turner struck out the next two batters and then induced a third to hit into the final out.

The Drillers’ 6-5 victory, said The Californian, was “one of the best all-around contests that has yet been seen in the city.”

“The little brown men from the Orient couldn’t win out against the local High School boys,” The Californian wrote, “but nevertheless they can play ball some. They can’t play like American boys who learn the game in their infancy, who take kindergarten lessons in alleys and back lots and who know what to do with the ball in any and every emergency. …

“But the Wasedas can play ball. They can throw and they are active on the bases; in fact they are pretty good all around men except at the bat. … But they played well enough to keep the interest up to fever heat in both games and on Sunday clearly had the sympathy of the 1500 people who packed the grandstand …

“The little men from across the Pacific … played with sufficient vim and vinegar and comported themselves with such uniform courtesy as to win … admiration.”

The next day, Memorial Day, The Californian’s front-page banner headline described the Russians’ final, crushing defeat: “Togo sinks and scatters the Russian fleet; Twelve ships go down and five are captured.” The Waseda players said goodbye to their hosts, climbed aboard the train and traveled to Fresno State University, where they lost 10-3.

Waseda won nine of its 26 games that spring and, led by Abe Isoo (1865–1949), regarded as the father of Japanese baseball, continued to send teams to the United States for several more years. Other Japanese university teams would follow.

The sports pages of The Californian returned to more ordinary staples, such as the upcoming welterweight fight at Scribner's Opera House between Charles Thurston and Kid Williams for the Pacific Coast championship.

On the other side of the world, Japan – its treasury nearly bankrupt from 16 months of war but its reputation burnished by its unexpected victory – prepared to accept the Czar’s humiliated surrender, mediated by U.S. President Theodore Roosevelt. For the first time ever, an Asian nation had defeated a Western nation on the field of battle.

Japan would go on to side with America, Britain and their allies in World War I. But it felt disrespected by the terms of the 1922 Washington Naval Treaty, which limited its ability to develop its Navy, and then was devastated the following year by an earthquake that killed 140,000. Many Japanese citizens saw the 7.9-magnitude earthquake as the country’s price for having embraced Western liberalism, and the traumatized country took a hard right turn toward fascism.

Through it all, Waseda University prospered. As of today, it has produced nine Prime Ministers of Japan, a number of important figures of Japanese literature and the CEOs of Sony, Honda, Toshiba, Samsung, Mitsubishi, and Nintendo. Its baseball team has a long history of success, having won 46 championships in the Tokyo Big6 Baseball League and five national collegiate titles, most recently in 2015.

Today, sports and global conflict share the world stage again: As the Super Bowl combatants take the field in Los Angeles and the Winter Olympics play out in China, Russia moves into position to recapture Ukraine the strategically located neighbor it has controlled, on and off, for centuries. Sports have changed — the size of the stage, the shape of the ball — and so have the tools of war. Their capacities to destroy or unify, however, are as powerful as ever.

Robert Price’s column appears here Sundays. Reach him at RobertPrice@KGET.com or via Twitter: @stubblebuzz. The opinions expressed are his own.