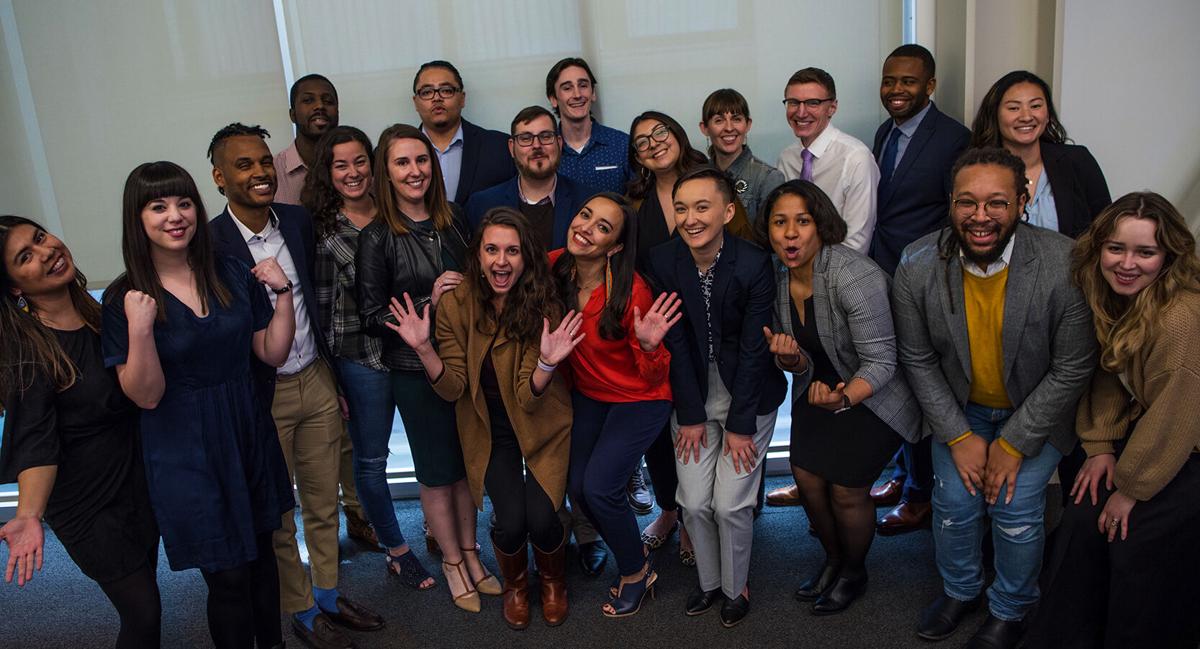 Sarah Audelo, center front in red, poses for one of her last in-person job photos before the pandemic. She is with a group of young executive directors from youth organizations that she works with. 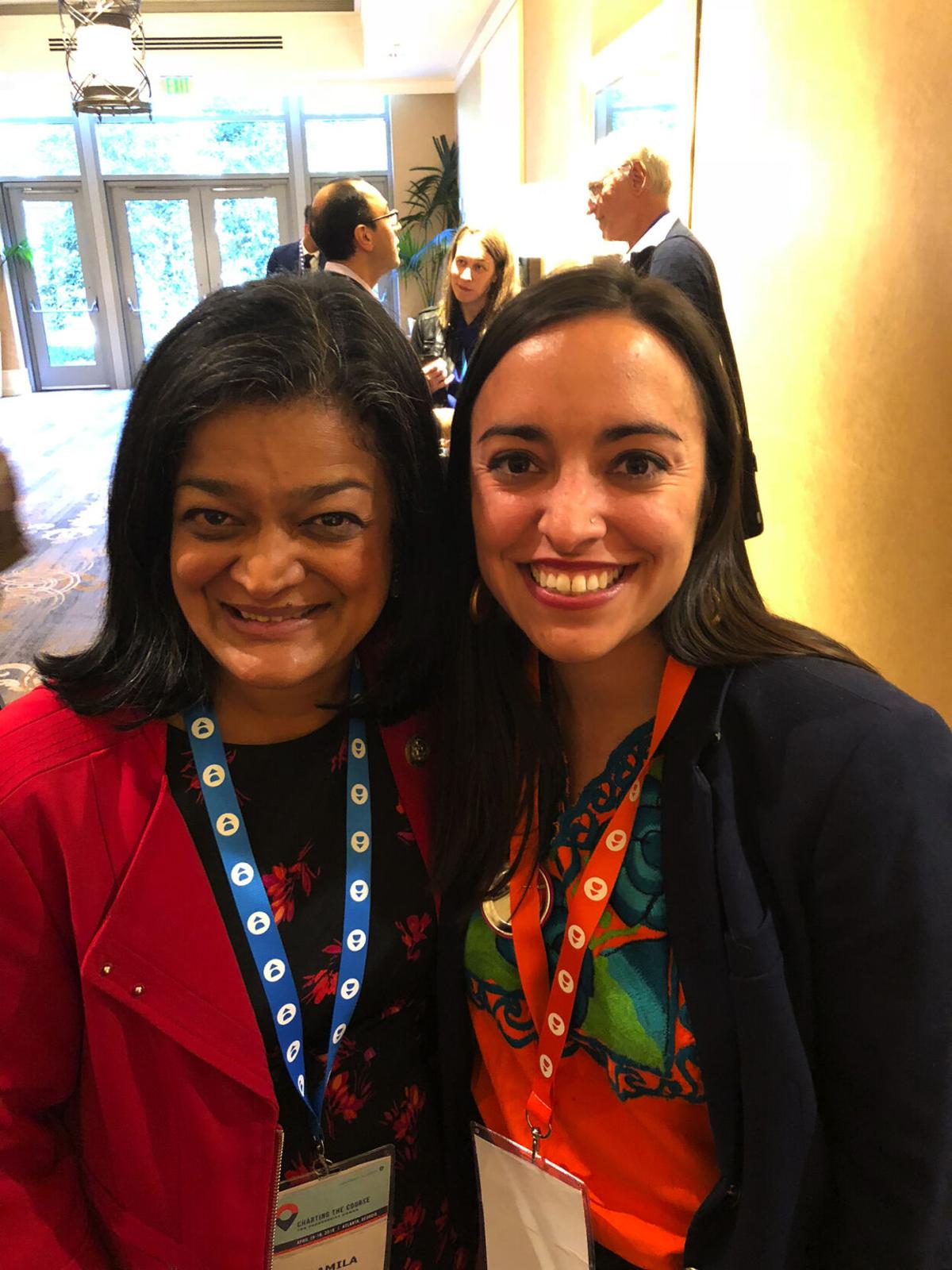 Sarah Audelo, center front in red, poses for one of her last in-person job photos before the pandemic. She is with a group of young executive directors from youth organizations that she works with.

There comes a time in the life of every Ridgeview High School Wolf Pack Vanguard marching band drum major to pass the long, chromed baton to the next in line. For Sarah Audelo, that time was 15 years ago. Bakersfield had helped shape her, but then Georgetown University beckoned.

That time of transition, in a sense, has come again. Sometime in the next few weeks, Audelo, 37, sans tall hat and high boots, will hand off the figurative baton. Her days as executive director of one of the country's largest youth organizing networks have come to an end. What shape her next challenge may take, precisely, she cannot say.

But she says it will not stray far from the mission of the Alliance for Youth Action, a political organizing group funded by private donations and foundation grants, which she joined in March 2017 and leaves in a few weeks.

That mission: Justice, to boil things down to their essence.

The concept of justice can and does take many shapes and address many causes, but foremost on her mind now is the sweeping new restrictions on voting in several U.S. states.

Just this year, according to the Brennan Center, at least 18 states have enacted 30 laws that restrict access to the vote. They’ve made mail voting and early voting more difficult, imposed harsher voter ID requirements and made overzealous voter-roll purges more likely, among other things. Three states have enacted broad omnibus voter suppression laws this year (in Georgia, Florida and Iowa), while Arkansas, Montana and Arizona all passed multiple restrictive voting laws. More than 400 bills with provisions that restrict voting access have been introduced in 49 states in the 2021 legislative sessions.

“The barriers to getting folks to turn out and to become registered, there are some challenges there,” she said. “Our job is to take the lessons we’ve learned and work to pass policy to make access to our democracy easier. In states like Illinois, Colorado and Oregon, there's a lot of fun, proactive work we can do. But in states like Montana, Texas and Kansas, it's a pretty defensive strategy in terms of fighting efforts to limit access to our democracy. So, yes, voting rights is definitely a core theme.”

But there is good news. As Audelo told NPR in an Oct. 11 interview, the encouraging turnout of young voters in 2020 is something to build on.

“We had been seeing signs that it was coming for a while — the increases in turnout during the midterms, in these odd-year races ... Young people were engaging, not just in voting to make change and to push back against the Trump administration, but they were taking it to the streets. They were showing up in city council hearings. And we saw this during the pandemic, too. When stuff went remote, young people were still staying engaged. And so we were hopeful that this would continue, even though we couldn't be in the field.”

Over the past year and a half in particular, much of the organizing — primarily in 19 states — has been online, Audelo said. That’s where young potential voters live so much of their lives anyway, but it has been especially useful during the pandemic, with opportunities for door-to-door, peer-to-peer connections proving difficult. That, she says, will continue. But the particulars will be for the Alliance’s next executive director to decide. Someone farther from 40 than Audelo now finds herself.

Audelo, who also holds a master’s degree in public policy from George Washington University, isn’t certain what she’ll do next but she knows one thing: “Not being an executive director — that’s that one thing I know for sure. I need a little bit of a pause.”

Pursuit of elective office is also not on her radar.

While her next professional move sorts itself out, she’s content at home. She is happily married to Joshua Lopez, a native of Connecticut who works with an organization that resettles refugees trying to leave areas of conflict. They live in Washington, D.C., where they actually have a backyard and a 50-pound pit bull named Nacho. And two other housemates: Audelo’s parents, Mimi and Joe Audelo, retired from Bakersfield.

Audelo remembers her days at Ridgeview fondly, and especially some of her teachers. There was her history teacher, Otis Jennings, her English teacher, Julie Detloff, and, of course, her band teacher, Robert Martens.

D.C. is home now. She loves it. But neither has she forgotten the Central Valley.

“Valley solidarity, that vibe, definitely exists out here” in Washington, she said. “You meet people who are from anywhere in the Central Valley, whether it’s Fresno, Modesto, Riverside or the tinier communities along the 99. Those moments can be pretty special.”

It helps that she sees others carrying the baton back in her hometown.

“I loved growing up in Bakersfield, but there were just not a lot of places to organize there, not a lot of outlets to drive change in my community when I was growing up,” she said. “Now when I look at Bakersfield, I'm so excited to see that there's a lot more options. ... The young organizers who are there are fantastic. It's really inspiring to see folks leading the fight for justice back home.”