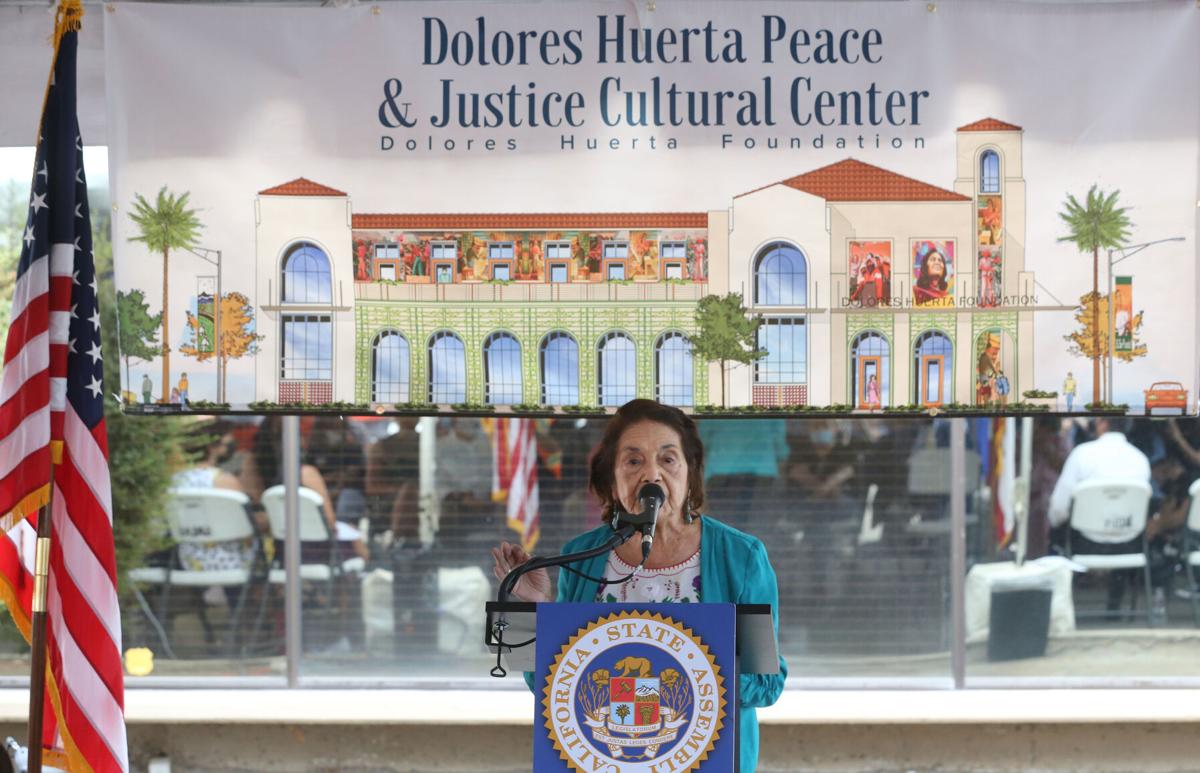 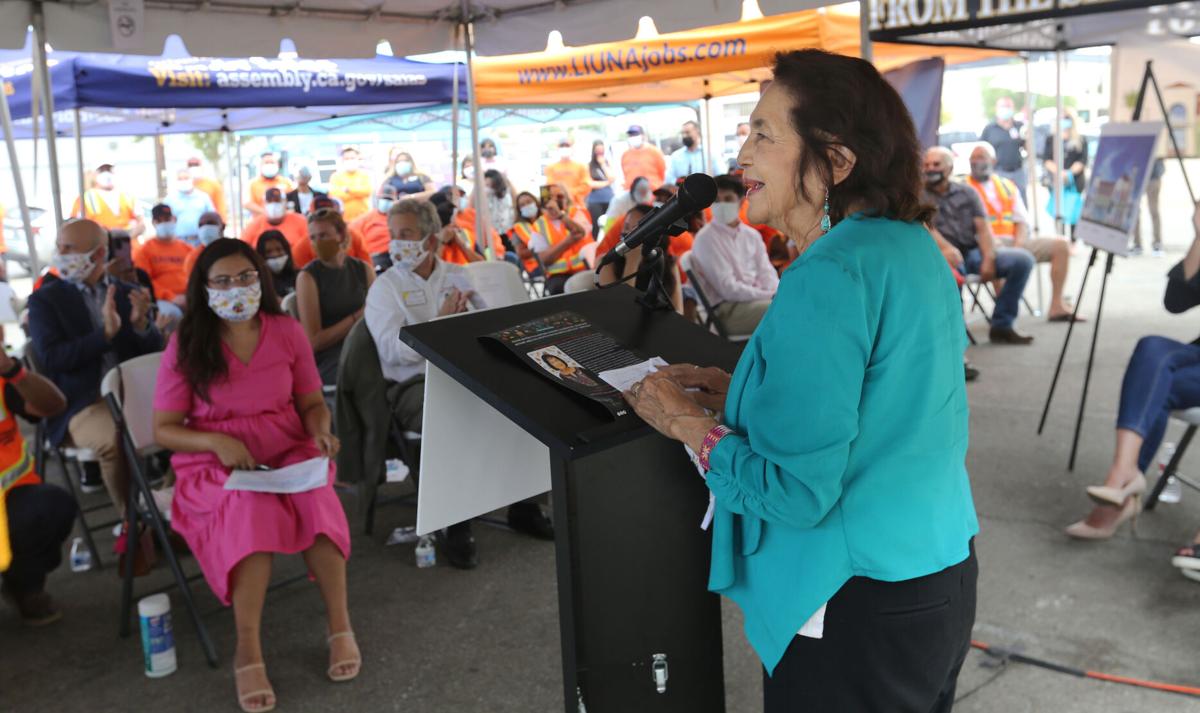 Dolores Huerta spoke during a celebration of $15 million in funding secured for the Dolores Huerta Peace & Justice Cultural Center in downtown Bakersfield. 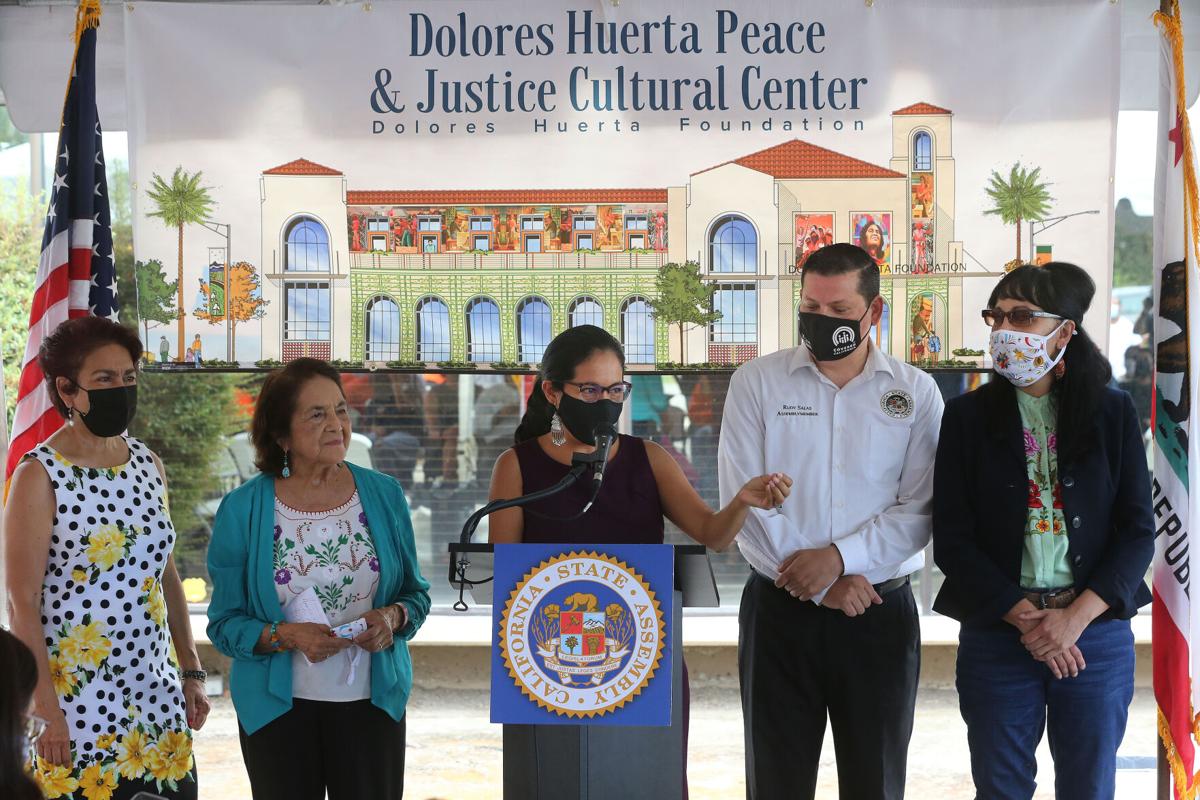 Dolores Huerta spoke during a celebration of $15 million in funding secured for the Dolores Huerta Peace & Justice Cultural Center in downtown Bakersfield.

One could look at the ambitious plans for the downtown block of Bakersfield bounded by 21st, 22nd, H and Eye streets and say they are appropriate and overdue, and one would be correct.

One could look at renderings of the Dolores Huerta Peace & Justice Center and say they represent a fitting tribute to the most revered living civil rights leader in America today and, again, one would be correct.

But on another level entirely, less significant in the grand scheme but significant nonetheless, is what the $22 million complex, as striking in appearance as it is in purpose, will mean to the downtown district’s visual character.

The Huerta Center will be a 36,400-square-foot cultural arts and learning complex with an attached two-story, 8,000-square-foot credit union that has historic ties to the farmworker movement that first thrust Huerta into the national picture.

It will be surrounded by a colorful Mexican baroque facade with tall, arched windows on the first floor and, on the second floor, murals, patterns reminiscent of Talavera tiling and a faux bell tower.

It will stand out. In a good way.

Which says something, considering that the Majestic Fox Theater, built in 1930, is across the street and a block south, and Bakersfield Fire Station No. 1, a Public Works Administration-funded, fully functioning landmark built in 1939, is catty-corner south.

The rest of the immediate neighborhood, however, is distinctly underwhelming.

That will change sometime in the winter of 2022-23 when the Huerta Center opens for business, boosted by a $15 million appropriation from the $262.6 billion 2021-22 state budget. Assemblyman Rudy Salas, D-Bakersfield, and state Sen. Anna Caballero, D-Salinas, who were key players in pushing it through, were among the participants at a public celebration on the site held Wednesday.

For decades, a lone building, now occupied by the Self-Help Credit Union, has been the only thing on the property. That building, at 2100 H St., will be razed and the credit union incorporated into the new Huerta Center campus, perhaps the first new downtown structure of significance west of Chester Avenue to be built in decades.

The center will also house the headquarters of the Dolores Huerta Foundation, classrooms for art, dance, music and other activities, community meeting space, a 20,000-square-foot amphitheater, and an early childhood education preschool with two classrooms and a playground. Among its educational focuses will be reading and financial literacy.

Another focus will be local history, and not just of Latinos.

“Our goal is to tell the stories of the Chinese who built the railroads, the Japanese who developed the agriculture, the Basques, the Native Americans, the Okies,” said the foundation’s executive director, Camila Chavez. “That’s been our goal from the start — to be multicultural — and we’ve tried to make that clear.”

Until it became the headquarters of Watson Realty somewhere around 1975, 2100 H St. had a long history as a car lot under a succession of proprietors. In 1940, Kitchen-Boyd Motors was selling new Pontiac sedans at that location for $795 (“Look for the Big ‘OK’ Signs on the Light Poles”). In 1954, it was home of Motor Center, whose owners, apparently not confident users of adjectives, sold cars “much better than described.” By 1965, it was the home of Three-Way Chevrolet, which is still very much in business, but out at the Bakersfield Auto Mall.

But one previous use of the property hews somewhat closer to its new, soon-to-be fulfilled purpose. In 1935, mid-Depression, George D. Nickel contracted with the federal government to accept enlistment applications for the Civilian Conservation Corps, a New Deal program founded two years before for “youths 18-35 whose families are in distress.” Nickel took applications at his office at 2100 H St.

Now, at that same spot, the Huerta Foundation will be offering services to those “whose families are in distress” or can otherwise use guidance, education or a sense of belonging.

The center had already started fundraising prior to the state budget appropriation, according to Chavez. The California Endowment has given $700,000 and the AIDS Foundation has pledged $300,000, contingent on a matching gift — donations that have been applied to planning needs rather than brick-and-mortar. So they’re still at $15 million down, $7 million to go on the cultural center, whose design firm is San Diego-based Rodriguez Associates Architects & Planners Inc.

Some will ask why the nonprofit Dolores Huerta Foundation and specifically a figure like Huerta, so closely associated with Latino culture and Hispanic ethnicity, should “get” such a facility.

I didn’t hear complaints of that sort when another Bakersfield-based foundation, celebrating the culture of a different group of underpaid, underappreciated migrant workers, opened a quarter-century ago. The Buck Owens Foundation’s Crystal Palace also honors a local figure of international renown who chose to stay in Kern County, and give back to Kern County, even as the wider world beckoned.

Both will now have their distinctive landmarks in the city. And both will open their doors to patrons of all races and ethnicities.