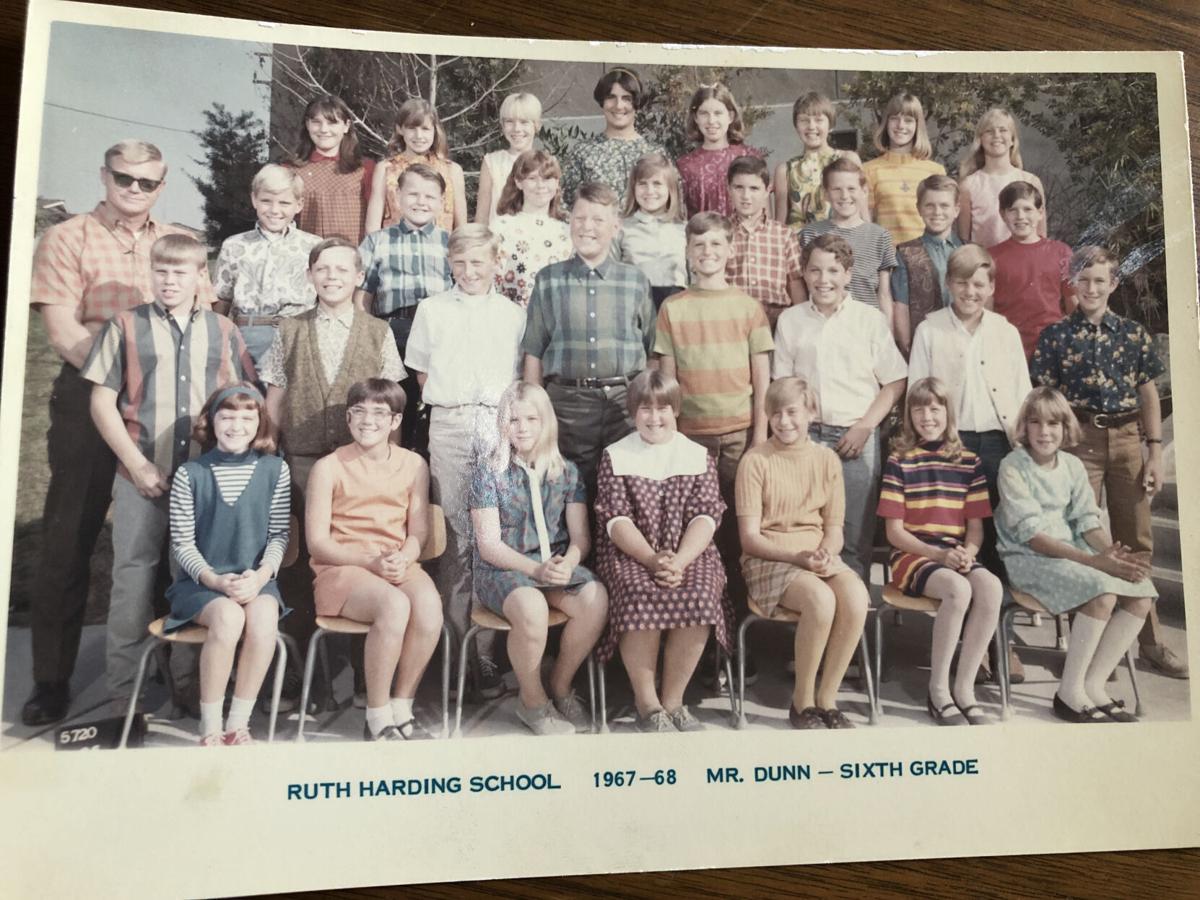 Karen Landon, far right in the bottom row, was a student at Harding Elementary in 1967-68, and Patrick Dunn, far left, was her sixth-grade teacher. Today Dunn, who turns 85 next month, is in prison for his wife's murder and Karen Landon (now Doyle) writes him twice a week almost without fail. 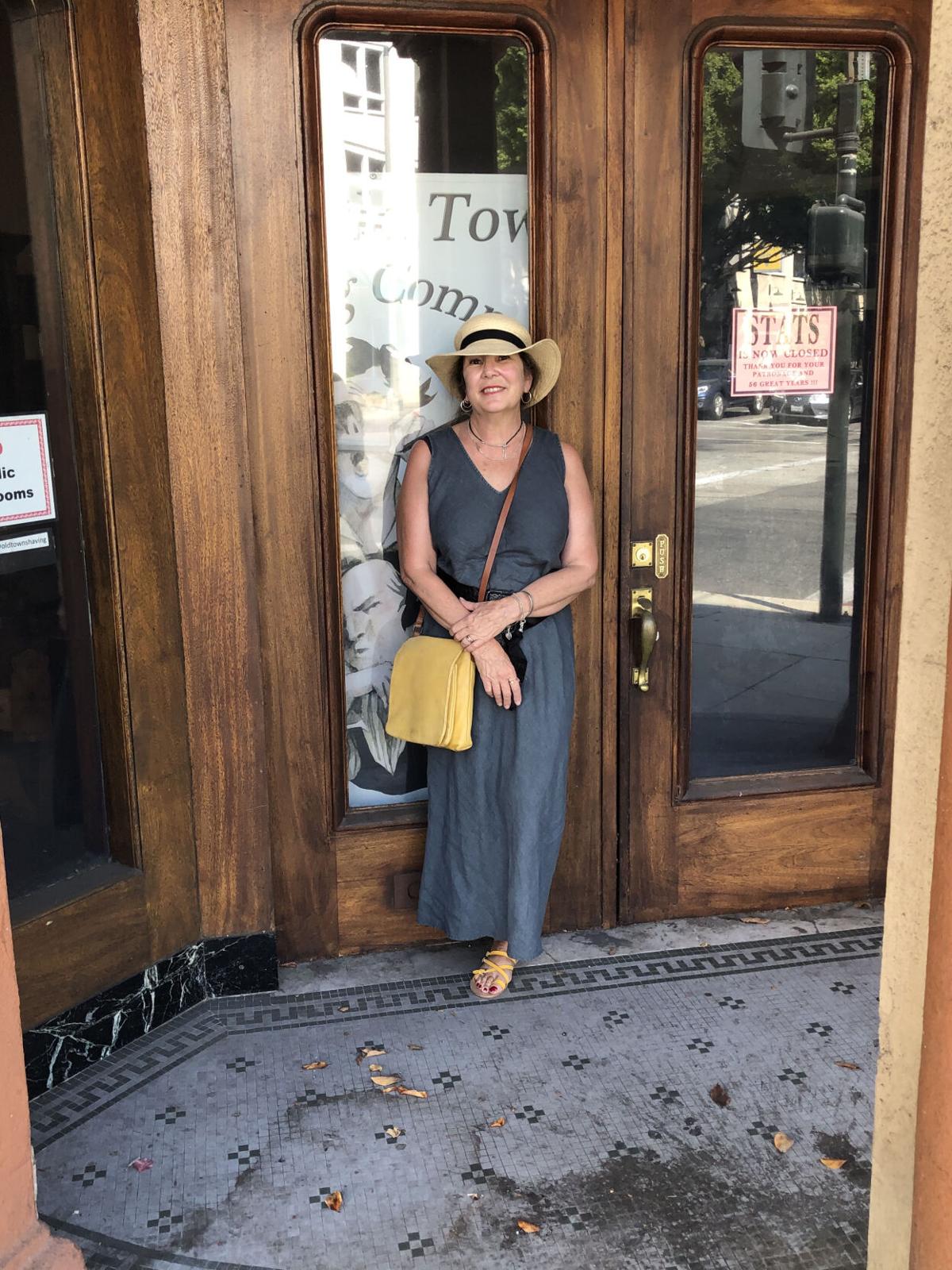 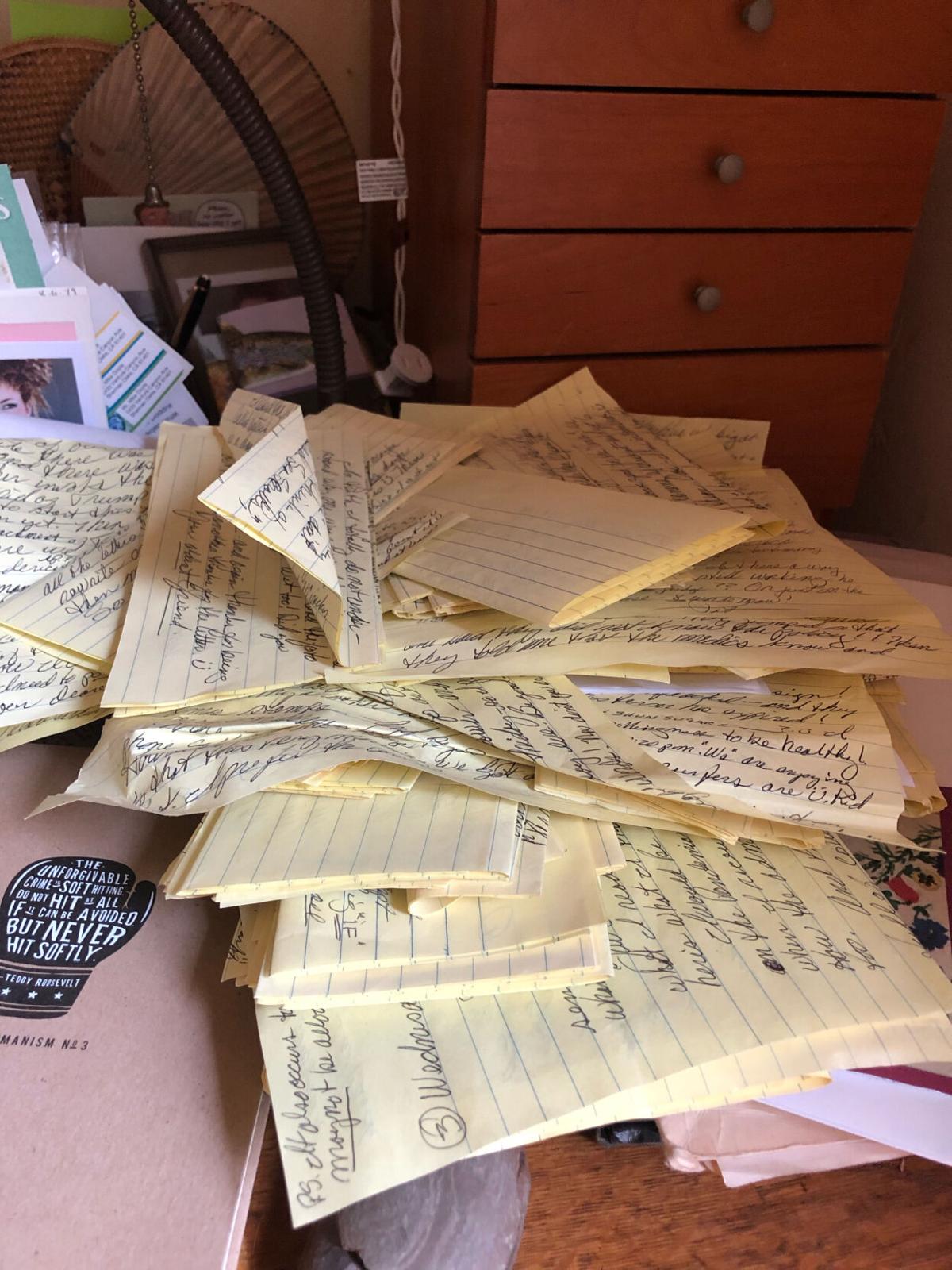 Some of Patrick Dunn's letters from prison to Karen Landon Doyle, a sixth-grade student of his 53 years ago at Harding Elementary.

Karen Landon, far right in the bottom row, was a student at Harding Elementary in 1967-68, and Patrick Dunn, far left, was her sixth-grade teacher. Today Dunn, who turns 85 next month, is in prison for his wife's murder and Karen Landon (now Doyle) writes him twice a week almost without fail.

Some of Patrick Dunn's letters from prison to Karen Landon Doyle, a sixth-grade student of his 53 years ago at Harding Elementary.

It was New Year’s Eve 2018 and three women, all Bakersfield expatriates, were sitting around the living room of a Huntington Beach home exchanging whatever-happened-to stories about their hometown.

At some point in the conversation, Karen Landon Doyle recalled something she’d heard some time back but had never satisfactorily researched. Maybe her friends, Melissa Mickle and Julie Drake, could corroborate it.

“Did you guys ever hear about Mr. Dunn?” she asked.

They hadn’t, and Doyle shared what she knew. One of the women pulled out her smartphone and Googled up further details. That’s when Doyle first heard the words “Mean Justice” as they applied to her sixth-grade teacher at Harding Elementary, Patrick Dunn, aka inmate H81949.

She purchased the book, “Mean Justice: A Town's Terror, A Prosecutor's Power, A Betrayal of Innocence,” Edward Humes’ unflattering 1999 portrayal of the Kern County District Attorney’s Office, the first chance she got.

“I'm reading it and tears are coming out of my eyes,” she said. “I'm like, ‘This isn't a novel. This is my sixth-grade teacher who is now in prison.’” In prison, she concluded after finishing Humes’ treatise, for a crime he did not commit: the June 30, 1992, murder of his second wife, Alexandra “Sandy” Paola Dunn.

Doyle, a married, semiretired jewelry maker who now lives in Sherman Oaks, discovered that Dunn was incarcerated at the Richard J. Donovan Correctional Facility in San Diego, and she wrote him a letter.

More than 2½ years later, they are still corresponding: Twice a week, in fact, with astounding regularity. Some 250 letters apiece, Dunn writing his on the same lined, yellow legal-size paper, with the same, consistent, underlying theme: He was railroaded.

In “Mean Justice,” Humes makes a good case for prosecutorial misconduct, if not necessarily outright acquittal. As The New York Times put it in its May 1999 review of his book, the prosecution's case was marred by “unbelievable misstatements, awful coincidences and slip-ups.” But some circumstantial evidence also tilted against Dunn.

In 1992, Dunn, by then retired as a high school principal, was running a successful mortgage foreclosure business. He drank too much, as did Sandy, his middle-aged wife.

Sandy, however, was fit and active.

She awakened every morning at 3 a.m. for a 6-mile power walk with the family dog.

Wealthy from shrewd real estate investments and with, according to Dunn, eccentricities that bordered on dementia, she wore expensive baubles when she took those pre-dawn walks. Dunn would later theorize that her jewelry, glittering as she passed beneath a streetlight, might have attracted the attention of a violent criminal.

Weeks after she failed to return from one of those walks, her naked, mutilated body was found in a shallow grave in the desert east of the city.

Dunn, in reporting his wife’s disappearance to authorities the day she went missing, did not exhibit the alarmed or concerned demeanor one might have expected, investigators would later testify.

He quickly became the prime suspect and, eventually, the lone defendant.

No physical evidence connected him to the crime, however, and investigators had been growing more and more frustrated. But then a witness stepped forward — a heroin addict who said he had observed Dunn early that morning moving a body wrapped in a sheet from his house to a car. An arm, the witness claimed, was hanging down from the sheet, exposed and limp.

And now Jerry Lee Coble wanted to make a deal: His testimony for leniency in sentencing for his grand theft conviction — stealing checks and trying to cash them at Sherrie’s Liquors.

Coble’s testimony, along with that of friends of the Dunns who said the couple fought regularly and that Sandy had threatened divorce, was damning. That the judge ultimately instructed the jury to disregard Coble’s testimony mattered little: They couldn’t unhear it.

And then there was this: Sandy, whose estate was worth an estimated $5 million, about $9.5 million in today’s dollars, had recently decided to move her assets into a trust. That action would have made it much more difficult for Dunn to access her money upon her death or incapacitation. She was just about to sign documents finalizing the transaction when she disappeared.

Patrick Dunn was convicted and sentenced to life without the possibility of parole.

The former schoolteacher continues to look forward to Doyle’s letters.

They discovered, among other revelations, that they share the same birthday, exactly 20 years apart: Sept. 27. Dunn will turn 85, Doyle 65.

Dunn confessed to Doyle he didn’t remember her at all. He’d spent 30-plus years as a teacher, counselor and principal. The number of kids he’d ordered to spit out gum had, alone, surely numbered in the hundreds.

And although Doyle very much remembered Mr. Dunn and that 1967-68 school year, it wasn’t for all the warmest of reasons. She had enjoyed the gymnastics instruction and the fashion shows, but the incident that stood out to her was the time the teacher noticed Doyle’s fingernails — dirty, scratched and rough from horseback riding — and called over a better-manicured girl. “Look at your fingernails. Look at her fingernails. See? That is how your nails should look,” he told her. In one of her letters she reminded him of that small humiliation and — though he didn’t remember it, of course — he apologized.

She did not see Dunn again after that school year.

Kids tend to remember little injustices that come their way in life. Now, Doyle has decided to stand up for what she believes was a very big one.

Doyle had followed the investigation into the 1979 death of 14-year-old Dana Butler, a Highland High School freshman several years behind Doyle in school. The district attorney, for reasons never completely clear, had declined to file charges connected to the girl’s killing against Glen Fitts, a member of the Bakersfield Police Commission at whose home the murder had likely occurred, despite substantial physical and circumstantial evidence pointing toward his direct involvement. That unsolved murder is one of many cases cited in Humes’ book as evidence of unscrupulous behavior in Kern County.

“I felt when I read ‘Mean Justice’ that Dana Butler was absolutely killed by Fitts,” Doyle said, “and this (Dunn case) exacerbates my feeling of the corruption in the prosecutorial department of the Kern County justice system.”

Doyle, Dunn and Dunn’s son Patrick Dunn Jr. have been trying to get Dunn’s sentence commuted to life with the possibility of parole. As it stands now, he is ineligible for compassionate release.

“I have been in prison for 28 years, 9 months and 16 days for a crime that I did not commit and never would,” Dunn wrote in his most recent letter to the Sacramento office where requests for commutation are processed. “My police record before I was arrested ... was immaculate, as is my record in prison. I ask that you please remove the LWOP from my sentence so I may be considered for parole and be with my family.”

Karen Landon Doyle typed the letter for him.

Now, almost 30 years after the murder of Sandy Dunn, she and her sixth-grade teacher wait.