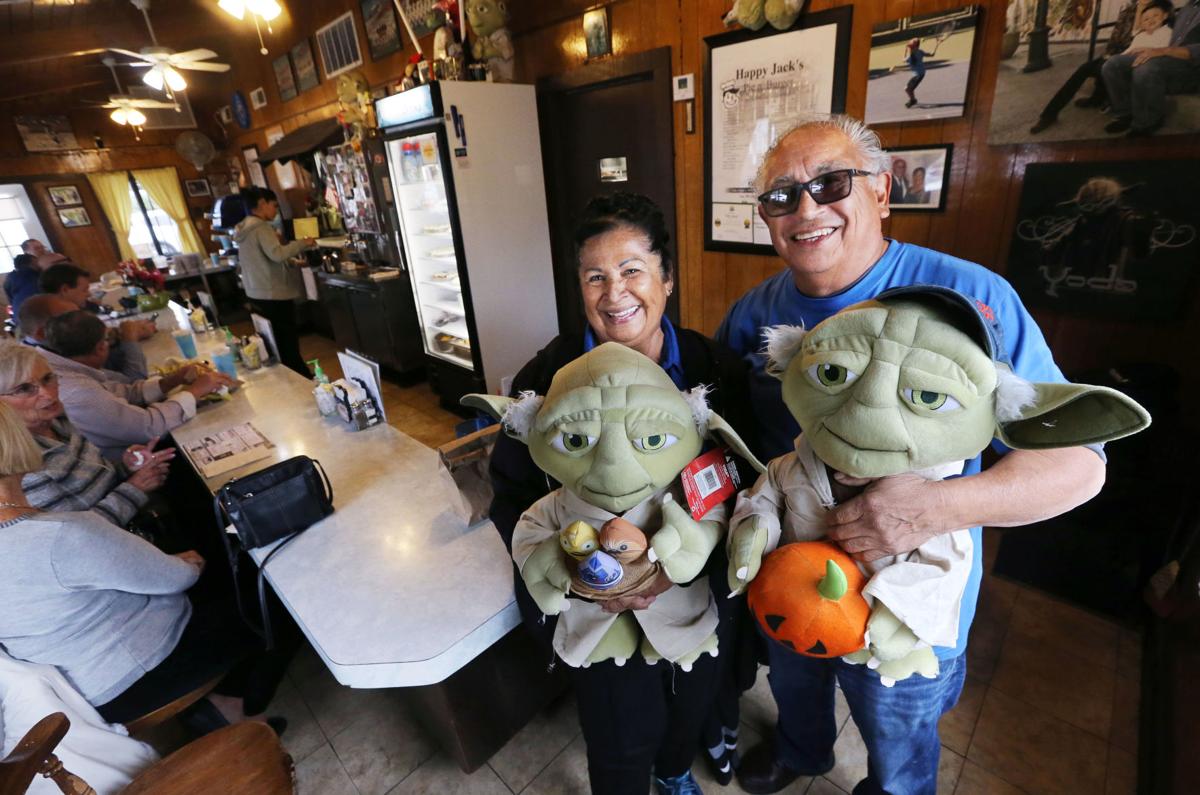 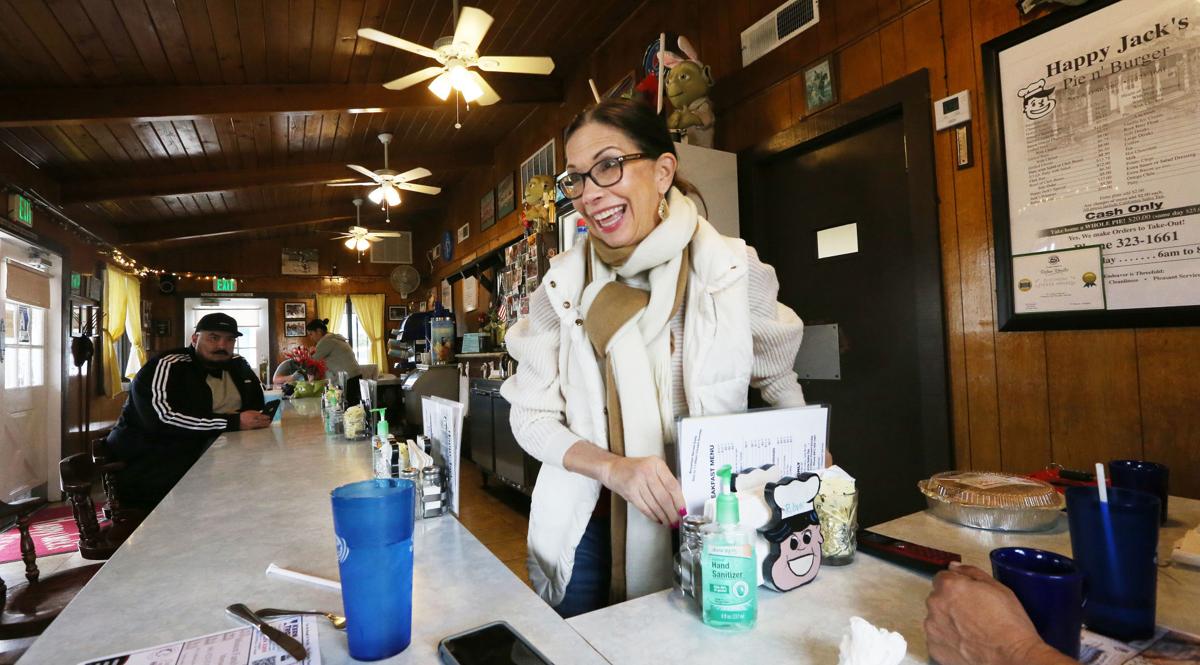 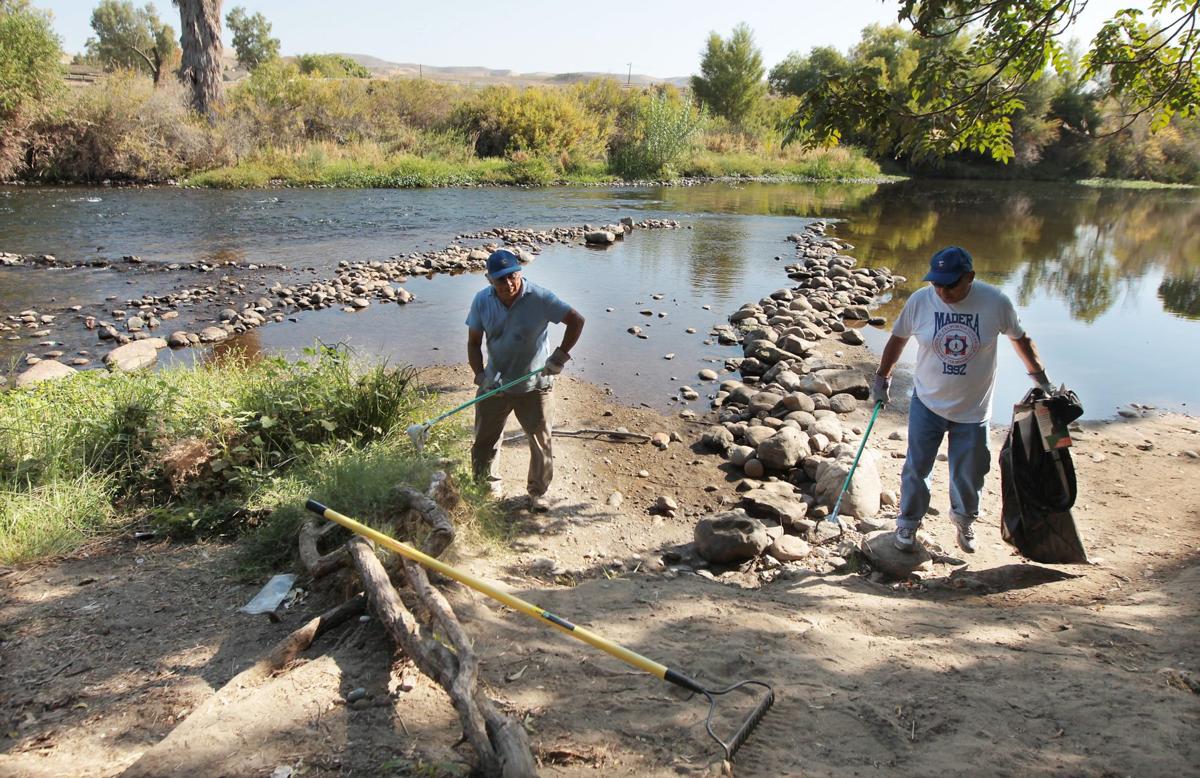 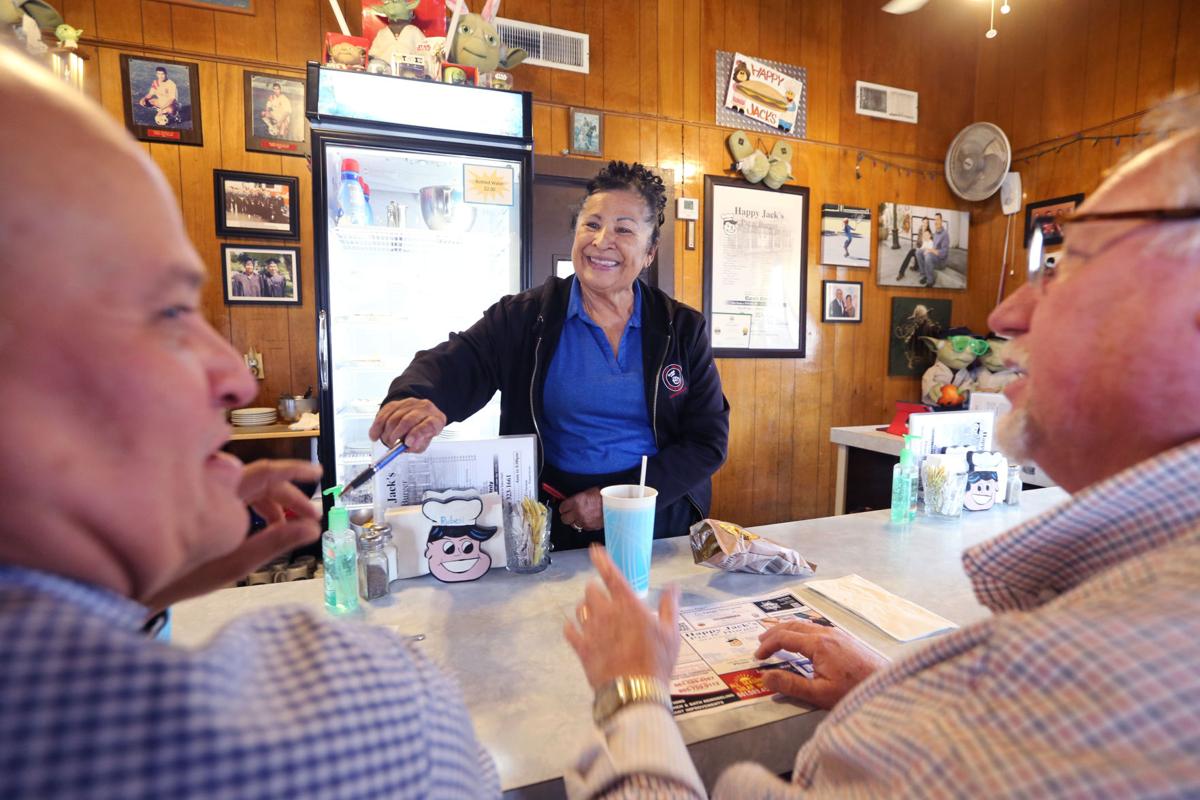 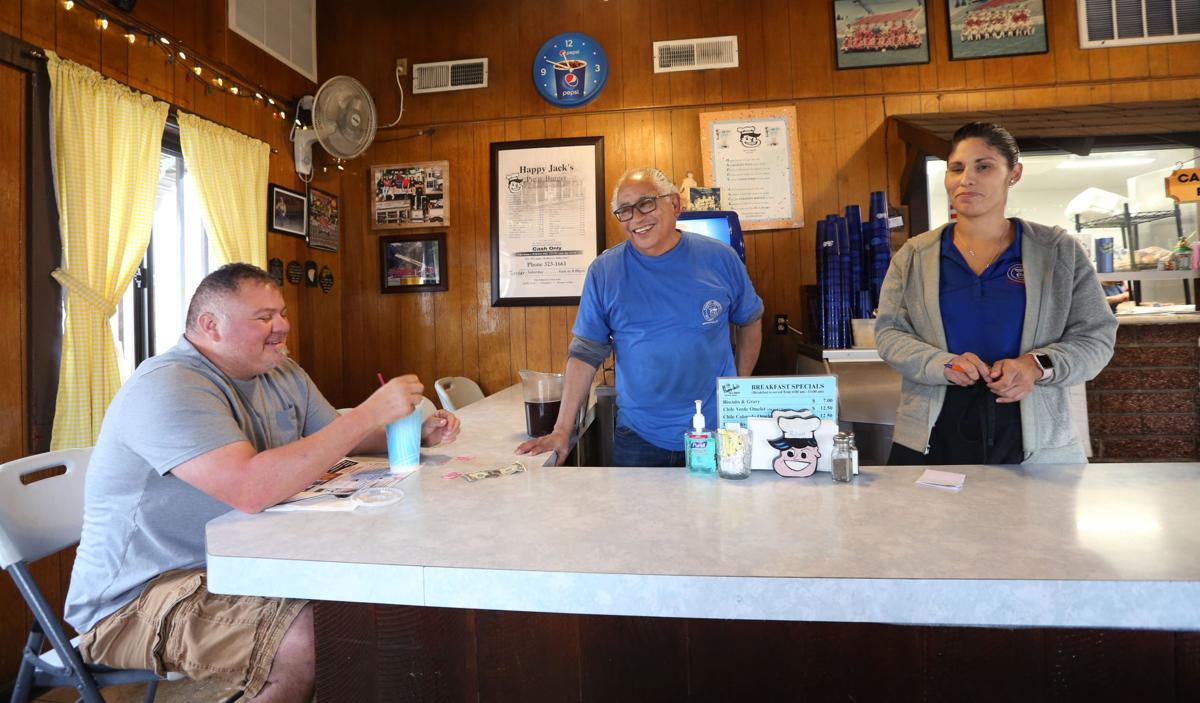 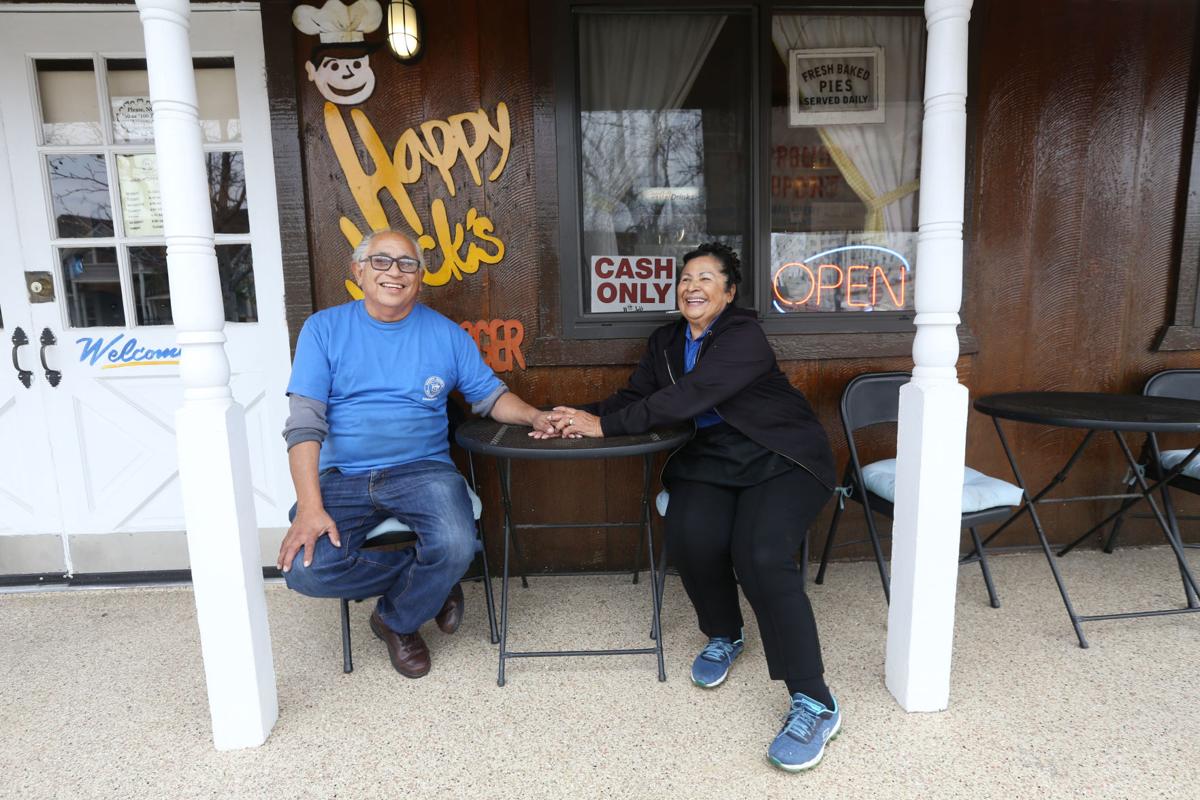 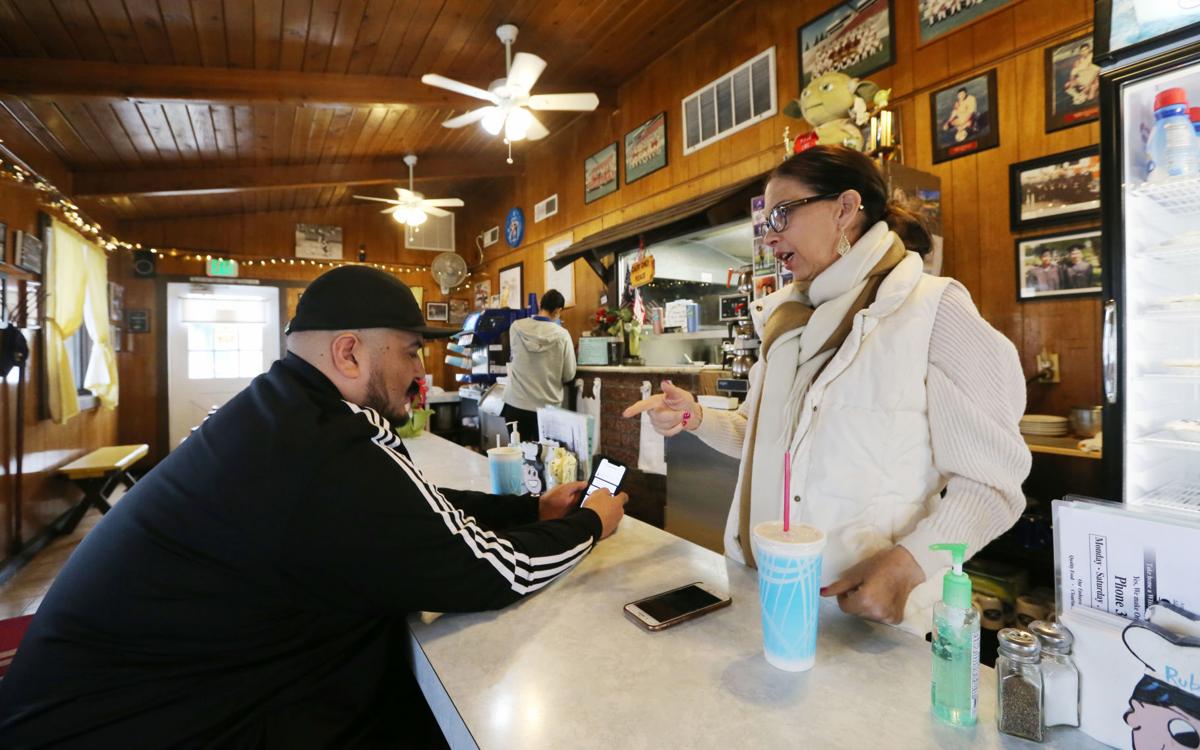 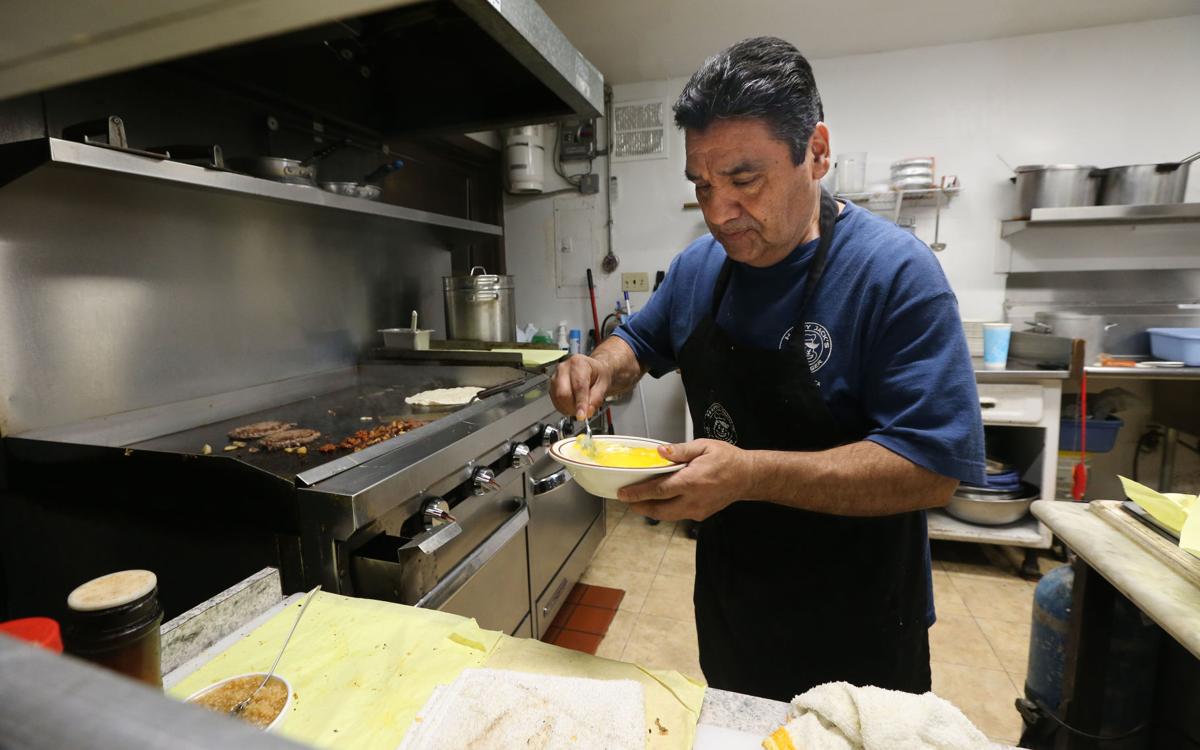 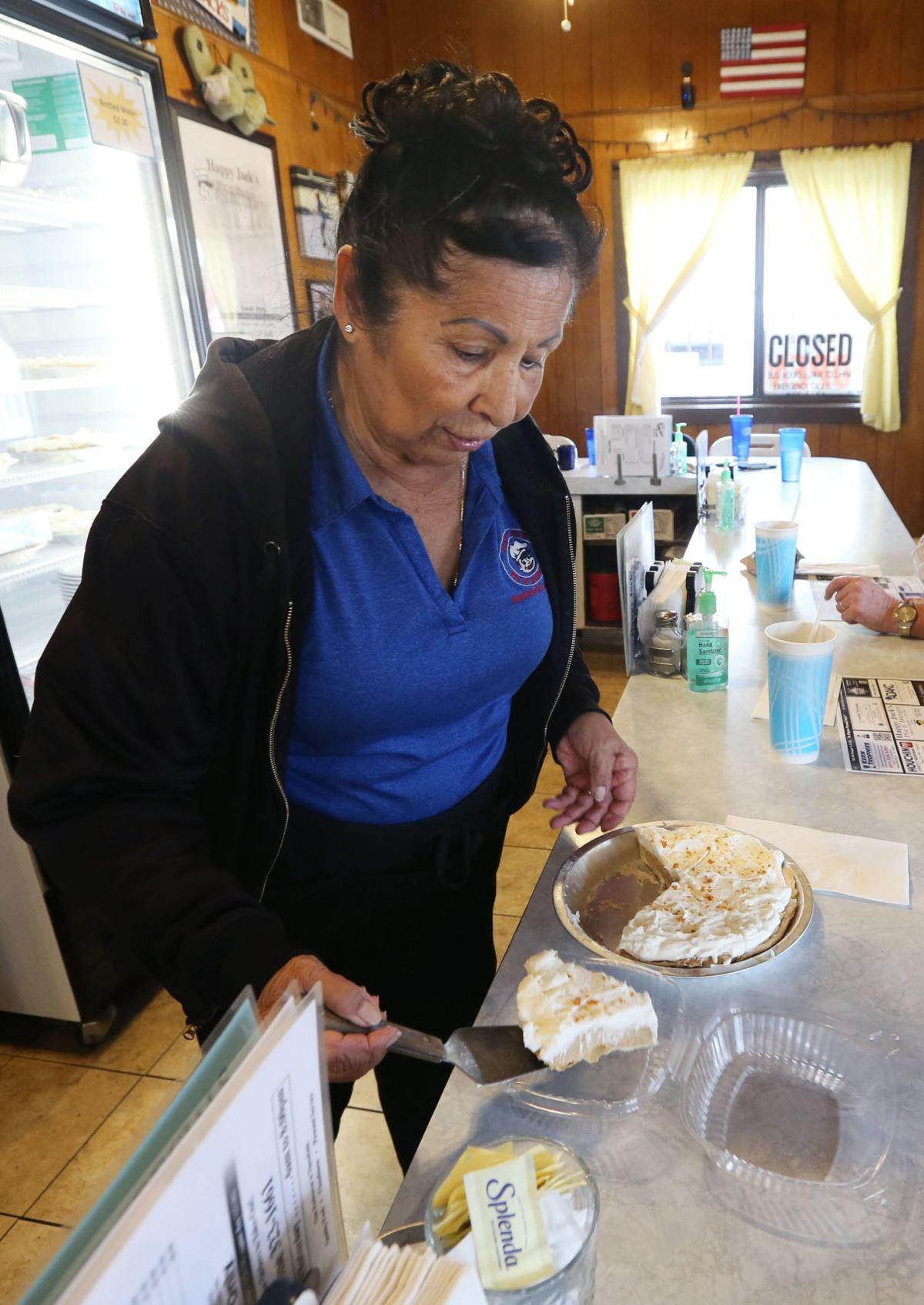 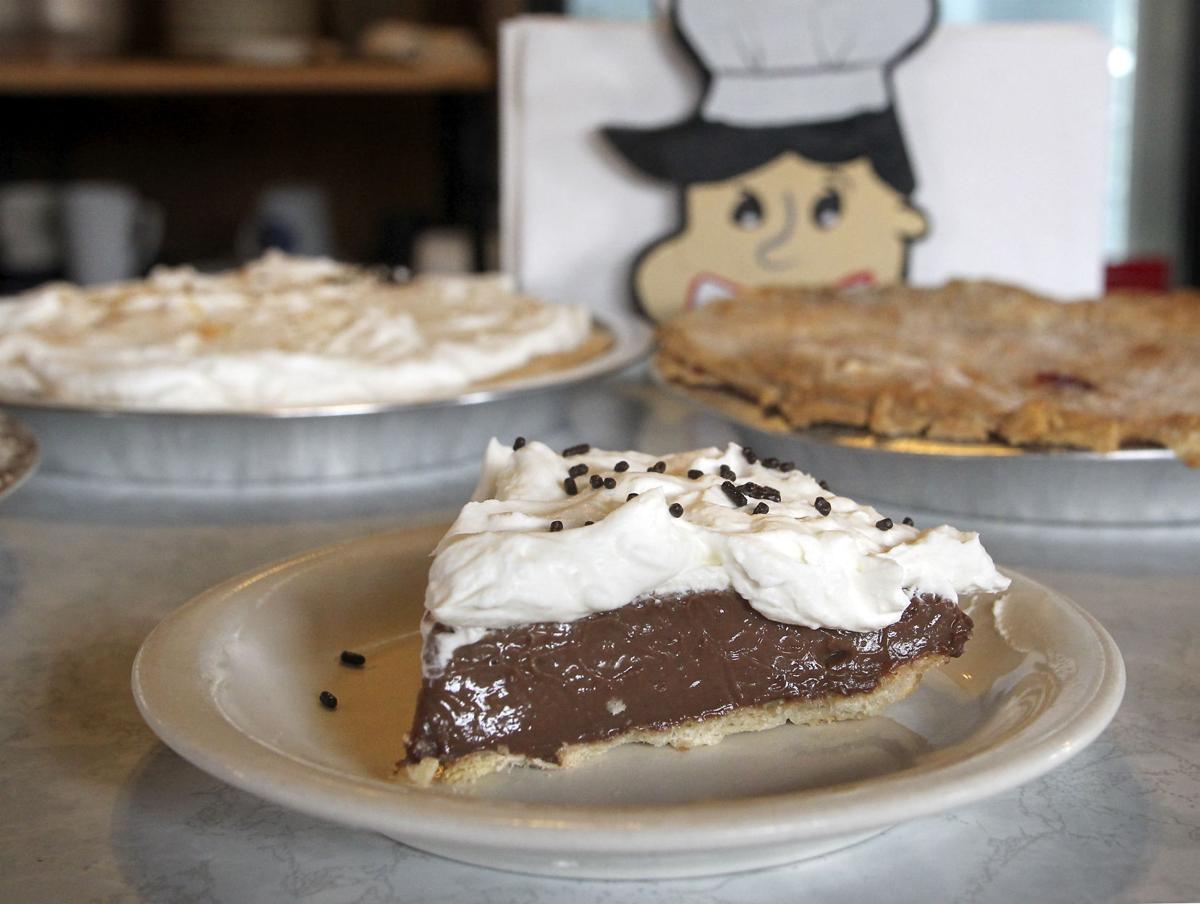 It was her first day as a server and Scarlett Sabin was trying to be meticulous. "Cheeseburger, no onions, light sauce," she would write in her little order pad, spelling out every letter in lilting script. The cook, accustomed to "CB w tom" and similar lunch-counter abbreviations, motioned over the owner. "What is this? And what is this? Tell her I want an order, not a story."

And with that, Sabin was unceremoniously terminated as an order-taker. Fired on the spot.

"I told her, 'Go be a butterfly,'" recalled Frances Rosales, who, with husband Ruben Rosales, owns Happy Jack’s Pie n’ Burger, a microscopic diner a block behind Bakersfield's Fox Theater. "I told her, 'Go walk around and talk to people and leave the rest to us.'"

That was 4½ years ago, and Sabin still hasn't taken the hint. She is here at the diner every second Sunday for Happy Jack's monthly fundraiser benefiting the Ronald McDonald House, an international nonprofit that provides temporary housing and emotional support for the families of children facing extended hospitalizations. Sabin has been the director of the Bakersfield Ronald McDonald House at Memorial Hospital since it opened in 2009.

One day in 2015, out of the blue, Ruben called Sabin and offered her his restaurant at G and 20th streets one Sunday a month — a day they're normally closed — with all proceeds going to RMDH. They've been going strong every second Sunday since then (except in May when, in deference to mothers everywhere, they move the fundraiser to the third Sunday).

Yes, a decidedly un-McDonald's-like, consummately mom-and-pop purveyor of hamburgers is working in collaboration — sort of — with America's most iconic fast-food monolith for the benefit of sick kids and their families the world over. Except, in Happy Jack's case, the proceeds stay at the Bakersfield House.

"It has turned into a phenomenon that people look forward to," Sabin said. "It's like going to your family's house for Sunday brunch."

And, yes, this (Jan. 12) being the second Sunday of the month, breakfast will be served starting promptly at 6 a.m. (concluding at 2 p.m.) — as always, in a tent erected in the small parking lot adjacent to the restaurant. The restaurant itself seats just 20 along its single, bracket-shaped counter, so that would never suffice.

McDonald’s Corp., some of whose executives founded the independent charity in 1974, is not likely to be offended by the involvement of a rival burger empire. Frances, in a somewhat startling coincidence, is a third cousin of Ronald McDonald House Charities' chairman of the board, Steve Ramirez, a Bakersfield native raised in Sacramento, who was back in the city of his birth last July for the dedication of the local RMDH expansion. The cousins played together as small children.

If the RMDH fundraiser were all that Mr. and Mrs. Happy Jack did for the community, that would surely be enough. But they do more.

Ruben has been leading a team of friends, customers and Kiwanis members — those are, in many cases, interchangeable terms for him — out to Hart Park at 7 a.m. every Tuesday to pick up litter and debris along the Kern River. During peak season, Memorial Day to Labor Day, they fill 37 50-gallon drums, empty them appropriately, and then head back to Happy Jack's for breakfast on the house.

That work has not gone unnoticed either. At this Tuesday's meeting of the Kern County Board of Supervisors, 3rd District Supervisor Mike Maggard will honor Ruben's long-running commitment to Hart Park and volunteerism.

"I can go into Happy Jack's and sit there by myself and get away from the world for a little while," Maggard said. "I just enjoy the atmosphere. But I had no idea about his cleanup work at the park until I went in there one day and we started talking."

Maggard has done more than cheer him on. When a thief hopped a fence at Happy Jack's and made off with all of Ruben's trash-grabber sticks, Maggard bought new ones.

The Rosaleses and a rotating crew — retired fire Capt. Basil Rios has been a mainstay — arm themselves with gloves, pickup sticks and garbage bags and hit the park, collecting abandoned picnic debris, dirty diapers and other carelessly discarded refuse they find along the Kern River’s edges. Most days they have an audience of peacocks, ducks, raccoons and beavers.

How Ruben, a former city parks employee, has the energy for it all is baffling. He starts baking pies every morning at 4 a.m. — usually banana cream, coconut cream, apple and "Rudy pie" (peanut butter and chocolate). Over one 24-hour period just before Thanksgiving, he and his small crew bake 500 pies — down from 1,000 just a few years ago.

The Californian's longtime restaurant reviewer, Pete Tittl, once raved: "Does anyone make a better peanut butter pie? The crust is the crisp, old-fashioned shortening version, the kind your grandmother probably made."

The Rosaleses, to borrow a phrase, have it their way. Happy Jack's has no fryer, so customers can't get french fries with their burgers, only "Rudy's potatoes" — crumbled, seasoned and grilled — or potato chips. All of the prices listed on the menu include tax, which, as Tittl has noted, seems like a special discount. And please remember (as if the multiple capital-red-letter signs in the windows could possibly allow anyone to forget): cash only.

The thing that brings customers back, however, is Frances' running banter. "See if you can stop her from talking," Ruben last week advised a customer who was attempting to get in a word. "I'm not going to do it."

"Jack gave us some good advice," Ruben said. "'Don't worry about what someone is doing over there. Just take care of your own business.' And we've tried to do that."

The place has helped the Rosaleses raise a family — three sons and a daughter. Rudy Rosales works with special-ed students in the Kern High School District; Ruben works for Coastal Netting; Michael is a captain with the Kern County Fire Department; and Michelle, who lives in Napa, is the lieutenant governor of Kiwanis of Northern California; her husband is a wine consultant.

Today, Ruben is almost 75; Frances, he noted wryly, is three months older. He said they have never seriously considered retiring.

And why should they? They have so many first-name-basis customers, some of whom attempt to help out from time to time. We're looking at you, Scarlett Sabin. Just don't let her try to take your order.

"She's not even allowed to serve coffee," Frances said. "Last time, she burned herself."