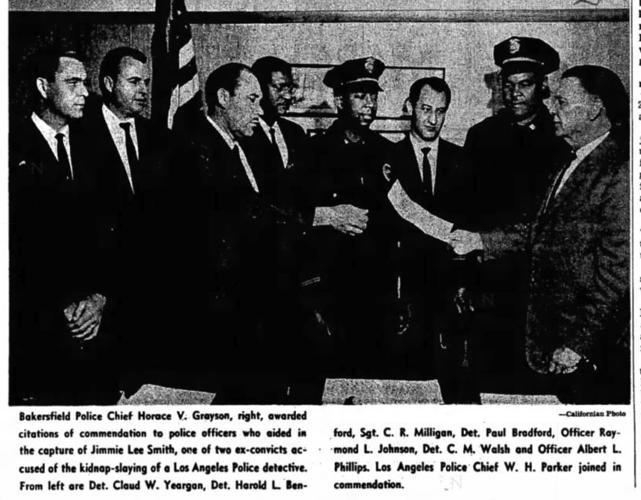 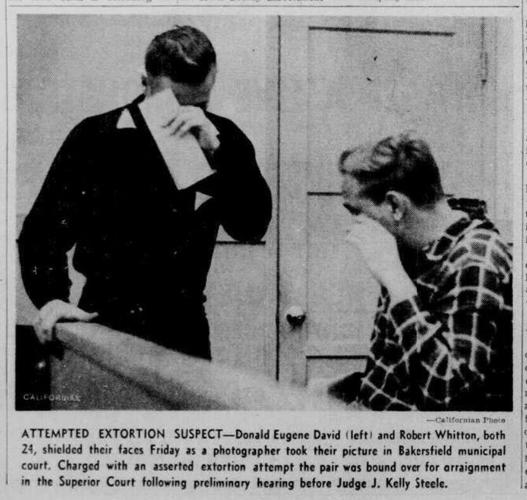 Donald Eugene David, left, and Robert Whitton, both 24, shield their faces from a Californian photographer at their Superior Court arraignment in 1956. Capt. Butch Milligan had arrested them for attempting to extort money from Mrs. Morris Chain. 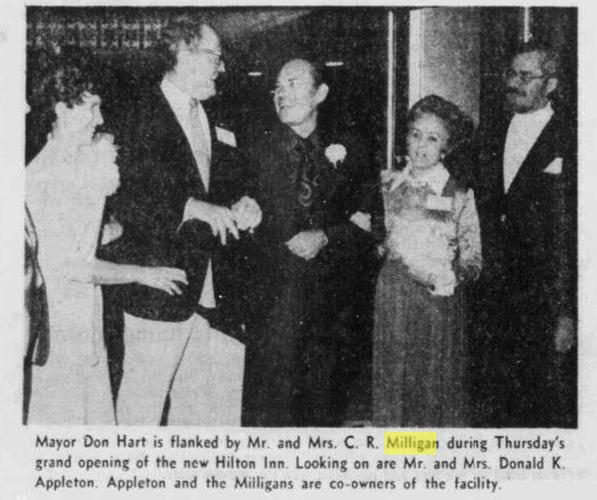 Mayor Don Hart, second from left, celebrates with hotel co-owners Butch Milligan and wife Nita Milligan, third and fourth from left, at the grand opening of the city's new Hilton Inn in 1973. 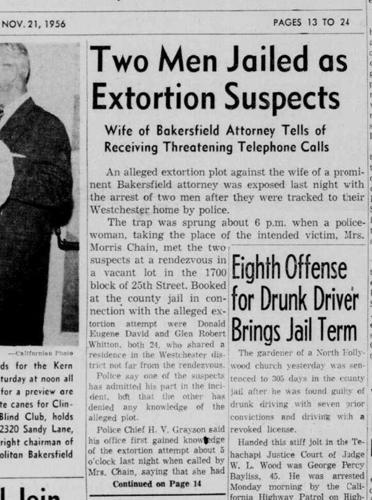 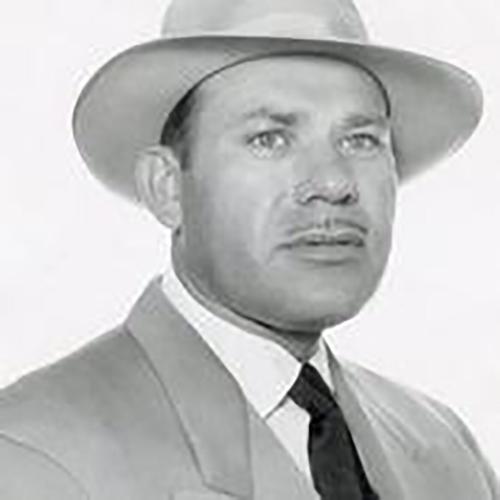 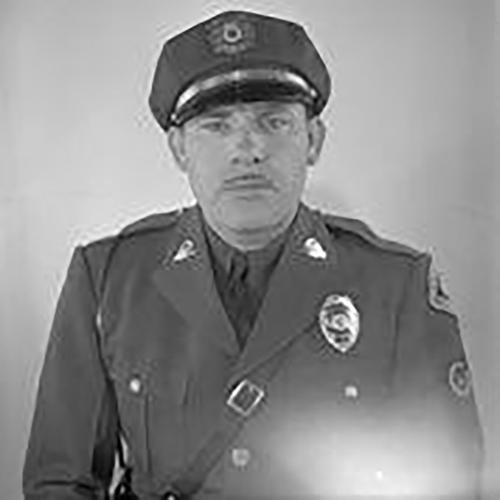 Donald Eugene David, left, and Robert Whitton, both 24, shield their faces from a Californian photographer at their Superior Court arraignment in 1956. Capt. Butch Milligan had arrested them for attempting to extort money from Mrs. Morris Chain.

Mayor Don Hart, second from left, celebrates with hotel co-owners Butch Milligan and wife Nita Milligan, third and fourth from left, at the grand opening of the city's new Hilton Inn in 1973.

The platinum-blond wife of Bakersfield’s most prominent defense attorney was panicky. A man had been calling to demand money: He’d phoned twice before, saying he would divulge uncomfortable information about her involvement with men other than her husband unless she complied, and now he had called a third time. This time, he said, he was not fooling around: He wanted to be paid in an hour.

Edith Chain, or, to recast in the way wives were most often addressed in 1956, Mrs. Morris Chain, decided it was finally time to call the police.

Bakersfield Californian stories from as early as the 1940s portray Milligan as a tough, proven cop who’d already made a succession of harrowing and noteworthy arrests. He was so active in the field — or perhaps Bakersfield, population 57,000, was so lively — he would occasionally turn up in the pages of The Californian for having made multiple, unrelated arrests on the same day.

He looked the part: rough-edged debonair with an Errol Flynn mustache and muscular, 195-pound frame. Milligan’s shoulders were so broad, in fact, his size 48 suit jackets required special tailoring.

“He was big and tough, with wide shoulders and a narrow waist,” recalled Richard Turner, a retired Sacramento attorney who, as a young man, met Milligan through his then-father-in-law, a Bakersfield police captain. “Like Superman.”

Milligan, who for years supervised the Bakersfield Police Department’s vice detail, packed a pearl-handled revolver, drove a Cadillac and boasted of friendships with Hollywood actors. One of those celebrity friends, “Gone With the Wind” star Clark Gable, caused a rear-ender on Chester Avenue one day as he emerged from J.C. Penney alongside Milligan, shopping bags in tow. They were going hunting and Gable had come to Bakersfield without the proper attire.

Chief Grayson regarded Milligan as his protege and closest confidant. He didn’t even like anyone else chauffeuring him around the city.

And now, on Nov. 21, 1956, two petty criminals, one a recent parolee from Soledad Prison, were trying to extort money from the wife of Morrie Chaimowitz — or Morris Chain, as he was better known — and they had run out of patience. Grayson summoned Milligan and, with no time to waste, they worked out the plan.

Grayson dispatched Lt. Mary Holman to portray Mrs. Chain, whose blond hair was a close match to the lieutenant's. First, Holman slipped quietly into the Chain home through a back door. Then she walked out the front door to Mrs. Chain’s sparkling new Cadillac and drove straight to the arranged rendezvous, an empty lot at 25th and H streets.

While Holman — the city’s first female police officer and future wife of Kern County Sheriff Charlie Dodge — sat waiting in the driver’s seat of Mrs. Chain’s car, Milligan hunkered down on the rear floorboard behind her.

As the two men, masked by colored handkerchiefs, approached the car to get their payoff, one spotted Milligan and shouted to the other. The thugs turned and ran for it.

Milligan tracked them to a house a few blocks away and had them cuffed within the hour.

The sum of money the two 24-year-olds had demanded from Mrs. Chain was never disclosed. Also lost to history are details of the conversation Mr. and Mrs. Chain surely had that evening.

When Milligan came to work for the Police Department in 1943, the city was not all that far removed from its rough-and-tumble roots. Gambling was endemic and so was the call-girl trade. How recklessly in-the-open was prostitution? In the 1940s, one commercial strip in the center of downtown Bakersfield — 19th Street, in the vicinity of L Street, especially between City Councilman Manuel Carnakis’s adult movie theater and the old Chinatown section of the city — had a blocks-long line of second-floor hotel rooms situated over virtually every ground-floor business — over the bars, the hardware stores and the small groceries. Leonard Winters, a longtime private investigator who worked for Morris Chain, both well-connected to both the Police Department and the vice it supposedly sought to corral, once confided to Bakersfield historian Gilbert Gia about the abundance of brothels: “Every one of the hotels,” he said, “had a cat house upstairs.” By the end of that decade, City Manager Carl J. Thornton had twice suspended Chief Grayson for allegedly taking payoffs from bookies and madams. Grayson survived (both times); Thornton didn’t.

It was into this environment, on April 3, 1943, that Millligan, a 25-year-old Bakersfield native born to a middle-class family of Oklahoma transplants, clocked in for his first shift with the Police Department. Already with five years of law enforcement experience (in Delano, Paso Robles and the Kern County Sheriff’s Office) he had been hired as a motorcycle cop by Chief Robert B. Powers, a turn-of-the century railroad detective and self-educated philosopher, then three years from retirement.

In 1946, after a year of palace intrigue over the selection of Powers’ successor, Horace Grayson became police chief and, in time, the most powerful man in the city. And Milligan, as gruffly charming as he was powerfully built, quickly became Grayson’s right-hand man.

The Chain extortion case represented Milligan’s most famous arrest until another crime seized the nation’s attention 6½ years later. In 1963, Milligan and a half-dozen of his officers captured Onion Field killer Jimmie Lee Smith at a southeast Bakersfield “rooming house” after what The Californian called “an exhaustive 20-hour dragnet operation.”

As described in the bestselling 1973 Joseph Wambaugh book, Smith and another ex-convict, Gregory Powell, kidnapped plainclothes LAPD Officers Ian Campbell and Karl Hettinger the night of March 9, 1963, and drove them north across the Ridge Route, a curvy, mountainous highway linking Los Angeles to the San Joaquin Valley. Then, in an onion field south of Mettler, they murdered Campbell with the gun Hettinger — at Campbell’s direction — had handed the kidnappers. As the killers fired on Campbell, a cloud passed in front of the moon, momentarily darkening the onion field, and Hettinger made a run for it. Hettinger, later to be elected to the Kern County Board of Supervisors, ran 4 miles to a farmhouse and summoned help.

As Milligan privately told the story years later, he called some of the people who operated brothels in a predominantly African American area of the city and described the man he was looking for. He received a call back: Someone had spotted a young, thin Black man who seemed to match Smith’s description at a boardinghouse on Lakeview Avenue. Milligan’s team moved in.

It was a little before 11 p.m. when Milligan, carrying a sawed-off shotgun, spotted Smith through a window. The fugitive was wearing only his underwear as he walked out of the common, shared hallway bathroom. Milligan had a clear shot. He readied himself to shoot through the window and take out Smith then and there. But another officer suddenly entered from a door at the other end of the hallway and came into Milligan’s line of fire. Milligan backed off and a short time later Smith was captured. The arrest made national headlines and built upon Milligan’s reputation as a resourceful, hard-nosed cop.

In 1966, Grayson retired, John M. “Jack” Towle was selected as the new chief and Milligan was promoted to captain. But Milligan’s influence on civic affairs went well beyond his important role at the Police Department. His best friend was Clyde Barbeau, who ran The Office bar, located in the alley on the back side of the Haberfelde building. In those days, City Council members made policy either at a corner table at the El Tejon Hotel or a block away at The Office’s horseshoe-shaped bar, according to former Bakersfield Mayor Mary K. Shell, who was a newspaper reporter before she became a politician herself in 1980. Then, a few days later, in council chambers, often after hearing impassioned public comment on both sides of an issue, those same City Council members would debate and vote as if they hadn’t already previously agreed over rounds of scotch and water.

Besides hosting Bakersfield’s shadow city hall, Barbeau had a business sideline: He was a prominent and successful bookie. That might have been problematic for a close friend who just happened to be the head of the BPD’s vice detail, but somehow it wasn’t.

Milligan also had a sideline: His wife, Nita, was co-owner of the Ramada Inn, at 2620 Pierce Road (today, the Best Western SureStay Plus, next door to Buck Owens’ Crystal Palace on what is now Buck Owens Boulevard), in an industrial area just northwest of downtown Bakersfield. It was so successful that the Milligans appeared to live quite comfortably.

Milligan’s last major case was the investigation into the murder of restaurateur Freddie Giovanetti. Freddie G., as he was often known, was fatally bludgeoned at his girlfriend's house in what police believed was a mismanaged attempt to force him to open the safe at one of his restaurants. The morning of Sept. 19, 1971, the wealthy and well-known proprietor of Freddie’s Top of the Hill was brutally pistol-whipped and he died a week later.

Immediately after Giovanetti’s death, Chief Towle assigned eight men to the case full time, with Milligan heading the team. It was one of the most high-profile and wide-ranging criminal investigations in the city’s history, and it lasted eight months. Two men and a woman were arrested for Giovanetti’s murder on May 18, 1972, and one, Julius “Jack” McDaniel, a 44-year-old tire salesman, was convicted.

But Milligan watched the legal system close the books on the Giovanetti case from the sidelines: On March 8, 1972, two months before the arrests, the head of the Police Department’s vice and intelligence details retired. Milligan was in the courtroom for the murder trial, but his service with the Bakersfield Police Department concluded just shy of 30 years.

Ten months later, on Jan. 2, 1973, Chief Towle died of a heart attack in the driveway of his home in the city’s La Cresta neighborhood. Capt. Robert O. Price, a 17-year department veteran, and no relation to this reporter, succeeded him.

Milligan maintained a respectable public profile. He worked as a private investigator for 17 years after his retirement and at one point ran unsuccessfully for the Bakersfield City Council. In 1973, he and wife Nita became founding co-owners of a second Bakersfield lodge, the Hilton Inn, at 3535 Rosedale Highway. (The hotel is no longer there; the DoubleTree by Hilton has operated near that address, under various names, since 1983.)

The Milligans remained active in politics for a decade, hosting at least two fundraising dinners for Congressman Bill Ketchum. Among the guests at one of them, in October 1976, was former California Gov. Ronald Reagan.

Milligan died in 1995 at age 78. The Bakersfield Police Department has not had a celebrity cop with his level of roguish charm and daring success since. Considering how the world has changed, perhaps it never will.