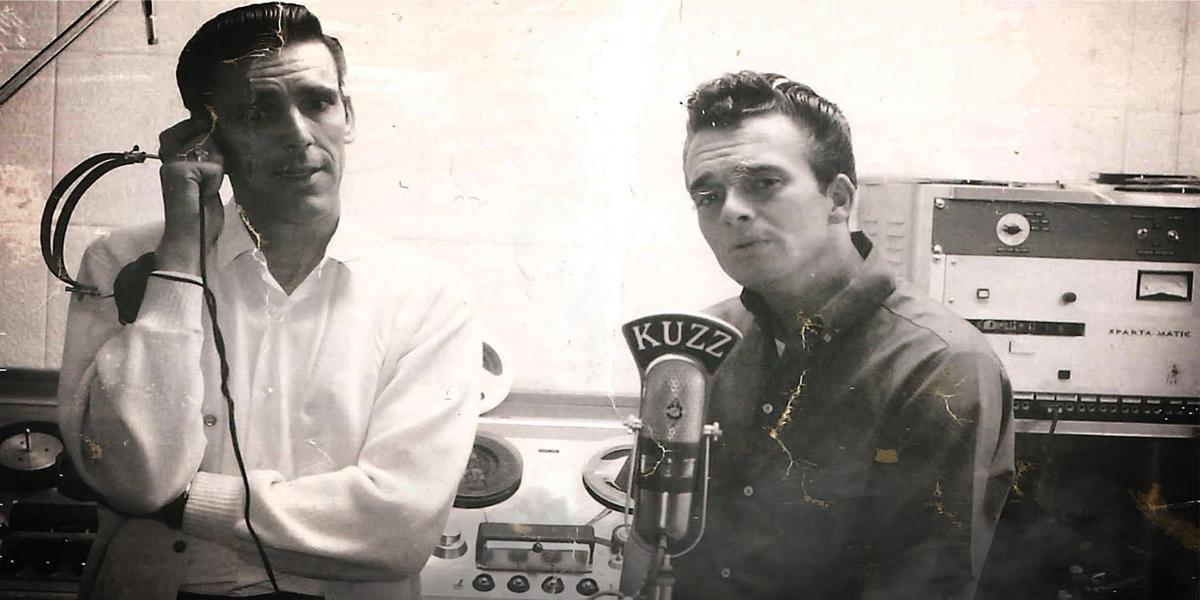 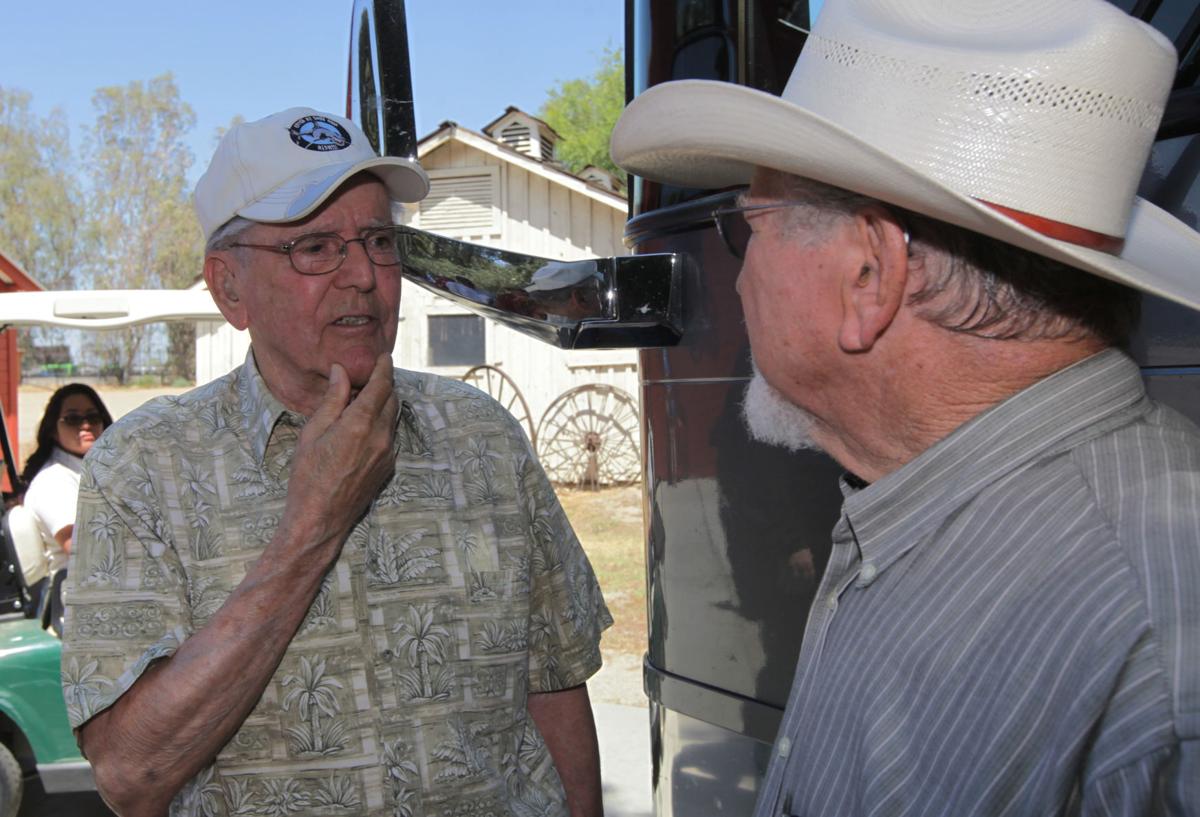 Fuzzy Owen, left, former manager for Merle Haggard, chats with Bakersfield musician Tommy Hays at the Kern County Museum. Both were on hand for the relocation of Haggard's childhood home. After making his initial remarks, Haggard rose again to publicly thank Owen: "The whole thing that happened to me wouldn't have happened without Fuzzy Owen."

Fuzzy Owen, left, former manager for Merle Haggard, chats with Bakersfield musician Tommy Hays at the Kern County Museum. Both were on hand for the relocation of Haggard's childhood home. After making his initial remarks, Haggard rose again to publicly thank Owen: "The whole thing that happened to me wouldn't have happened without Fuzzy Owen."

Fuzzy Owen had breakfast at Spencer’s Cafe, in East Hills, every morning. Every. Morning.

The waitresses all knew him, of course, and knew exactly what he was having. No menu required — just bring black coffee, two fried egg whites, a fried pork chop (but sometimes bacon, just to throw them off) and a side dish we might call Fuzzy potatoes: diced, fried potatoes with extra-extra fried onions. “Write ‘extra’ six times,” he’d tell the waitress, if she didn’t already know. Then he’d eat all the onions and leave half the potatoes.

That’s a big breakfast for anyone, much less a man in his 80s or 90s, but Fuzzy dove in with gusto every morning — then ate almost nothing the entire rest of the day.

Then one day in March, Spencer’s closed.

It was the pandemic working its evil, not anything to do with business at the diner, in a strip mall just off Oswell Street. Fuzzy, a widower who lived alone in a hillside cul-de-sac a mile east of the cafe, didn’t completely stop eating, but it was close.

Daughters Cindy and Robin, who live in town, visited regularly and tried to get him to eat. They even picked up takeout from Spencer’s, but it wasn’t the same. He didn’t miss that pork chop anywhere near as much as he missed the experience. The ritual of the easy, comfortable interaction. The good-natured ribbing, the coffee refills he didn’t really need.

“You know,” he’d say, pointing to the Farmer Brothers label on the coffeepot, “those guys aren’t really brothers.”

“I know, Fuzzy,” his server would respond.

“His routine was just thrown off,” said Phil Neighbors, his friend and preacher. “He didn’t know what to do with himself.”

We’re all experiencing that jolt of ill ease, to varying extents. Our days have been knocked off their axis. We’re hunkered down with television, books and delivered pizza, and when we do go out, the world is disguised behind face masks, 6-foot spacing and a kind of unspoken urgency to get things done and retreat into our homes again.

Add stage-of-life and isolation factors, and we have something to be concerned about. If Fuzzy had kids jumping on his lap every 15 minutes, or a wife reminding him to clean the pool, it might have been different. But Fuzzy, like 27 percent of U.S. men over 85, lived alone. (As age increases, the percentage of the population living alone also increases, according to U.S. census data. The numbers are even more pronounced for women: 47.6 percent ages 85 to 94 lived alone as of 2010.) Then factor in a world more closed off than even before the pandemic hit.

Owen became dehydrated and lost 35, maybe 40 pounds, daughter Cindy says. This is on a 5-foot-11 frame that hadn’t strayed much from 168 pounds since his Korean War-era Army days.

Toward the end, Fuzzy would occasionally talk about — and perhaps even talked to — his best friend in the world, Merle Haggard, who died in 2016.

Charles Lee Owen — Fuzzy Owen to all who knew him — died Monday evening at the age of 91. He helped create the Bakersfield Sound and in the process helped make Haggard a star.

Local residents of a certain age may remember Owen from the late 1950s, when he and his girlfriend, Bonnie Owens — she was in between marriages to Buck Owens and Haggard — were local celebrities. Haggard, that great American songwriter, was still in prison, undiscovered.

In those days, Fuzzy was a TV star, a regular on Cousin Herb Henson’s live weekday “Trading Post” show, which brought laughter and country music twang into southern valley living rooms for a decade. Fuzzy also played the honky-tonks, usually with his cousin and fellow TV star Lewis Talley — the Clover Club, the Lucky Spot and the most infamous of all, the Blackboard. When Haggard was released from San Quentin in 1961, after a stay of nearly three years for burglary and general incorrigibility, he started singing in the honky tonks as well.

Fuzzy recognized his talent — even his mistakes sounded good, Fuzzy once said — and signed him to the microscopic record label he and his cousin had started — Tally Records. Thus began a close friendship that endured for nearly 60 years, through poverty, fame and heartbreak, some of which he covered in his memoir, written with Neighbors: “Merle Haggard, Bonnie Owens, & Me.”

Owen’s passing can’t be added to Kern County’s tally of COVID-19 deaths, but in a sense he is a casualty of the epidemic. Like most of us, his world spun down an unfamiliar road; he simply couldn’t right himself.

At 91, of course, there had to be other issues. Cindy believes he had an undiagnosed tumor somewhere that blunted his appetite; the lockdown simply hastened the inevitable, and she is undoubtedly correct.

One has to wonder, however, just how many of our neighbors, especially our older or simply vulnerable neighbors, are experiencing similar disjointedness.

We need Spencer’s to get back to doing what it does best — frying up extra onions and keeping the coffee cup full — not one day earlier than what science and good sense demand, certainly, but as soon as possible.

Until Spencer’s and the rest of the world reopens, here’s what I want you to do: Call Dad. Email Uncle Bill. Write a card for Aunt Pat. Leave some pie, or dinner, on the porch of that sweet older lady next door. It might not be the same as a pork chop and egg whites, served by their favorite waitress, but it might get them by.

Fuzzy Owen’s family will hold a private service, limited to 10 immediate family members. A viewing is scheduled for Hillcrest Cemetery from 1 to 6 p.m. Tuesday, May 26. A remembrance event, date and place to be determined, is possible as well.

Fuzzy Owen, one of the architects of the Bakersfield Sound, dies at 91

Thank you for writing an article about not just the person, but the history. I'm learning. My condolences.