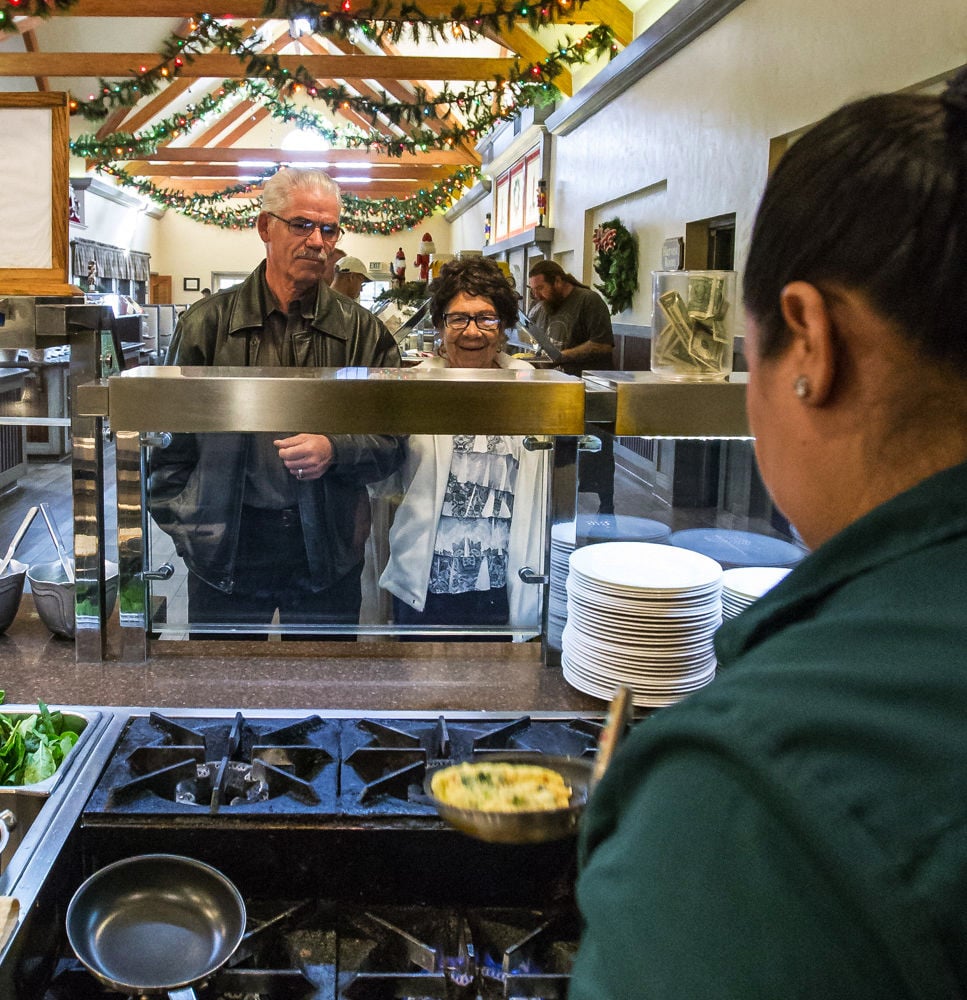 Jose Mendez and his mother, Esperanza Mendez, order their omelets during a Sunday breakfast at Hodel's Country Dining in December 2017. 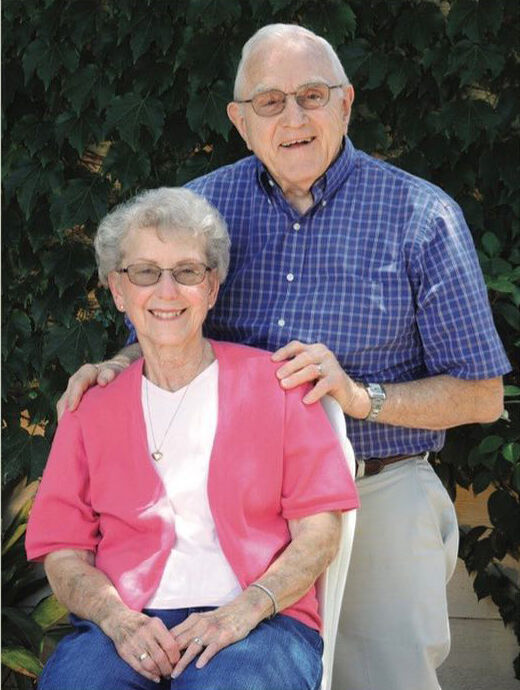 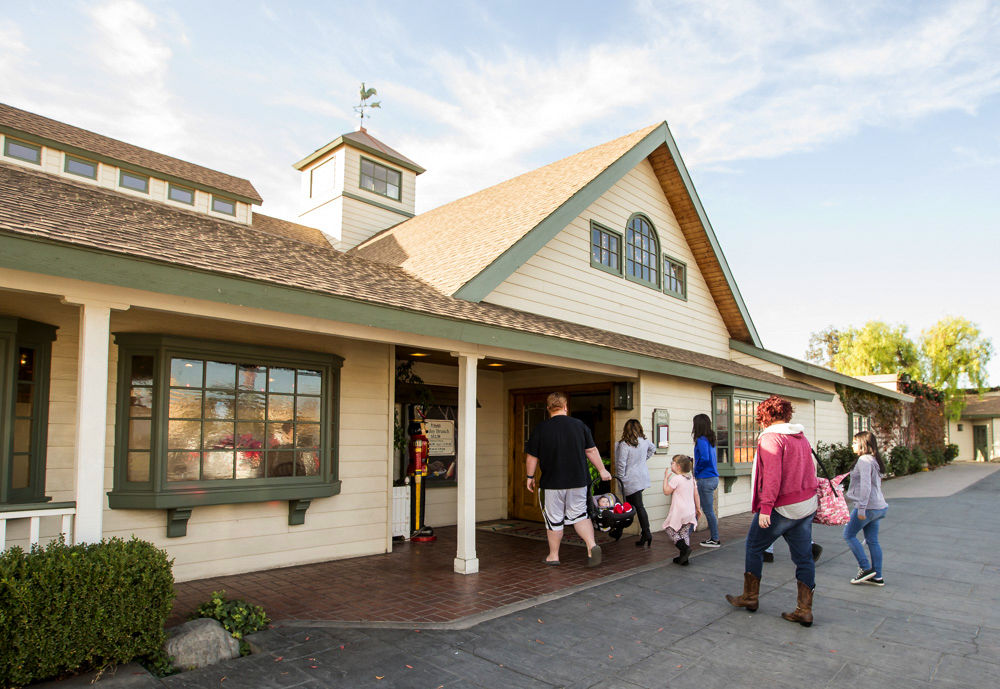 Hurry up, it's breakfast time at Hodel's Country Dining, in this December 2017 photo. 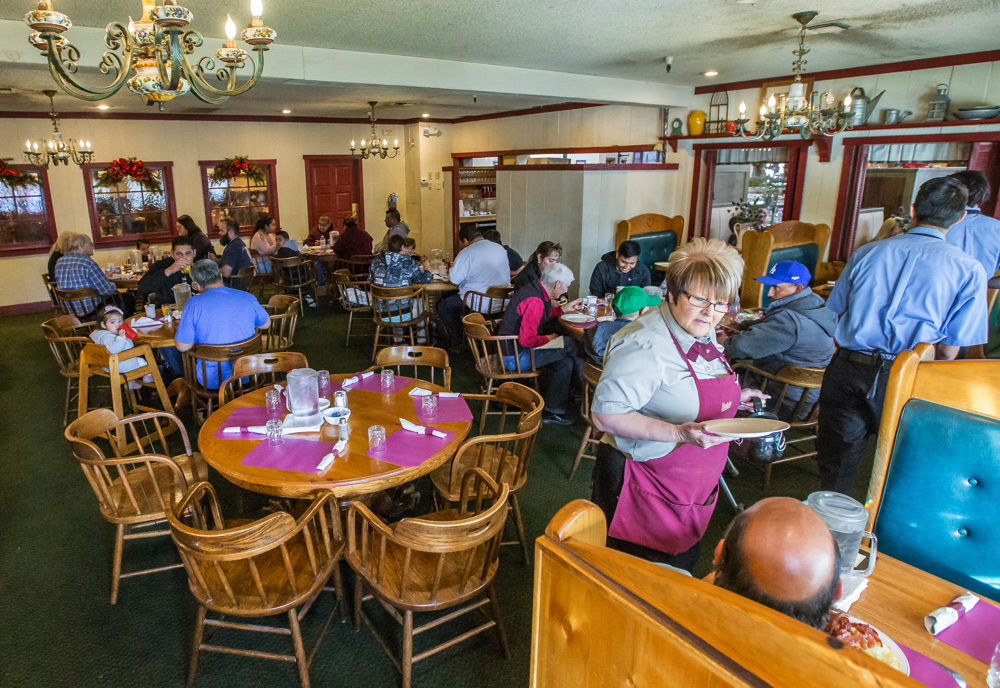 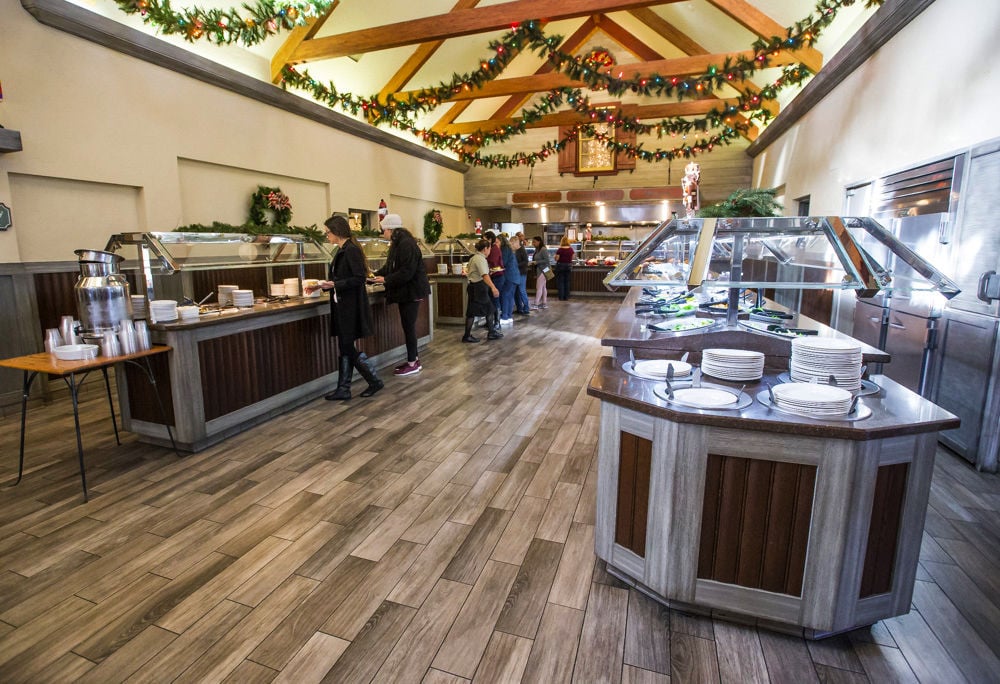 Hodel's Country Dining's buffet offers a large choice of options, which continue to remain fresh thanks to the diner turnover, as shown in this December 2017 photo. 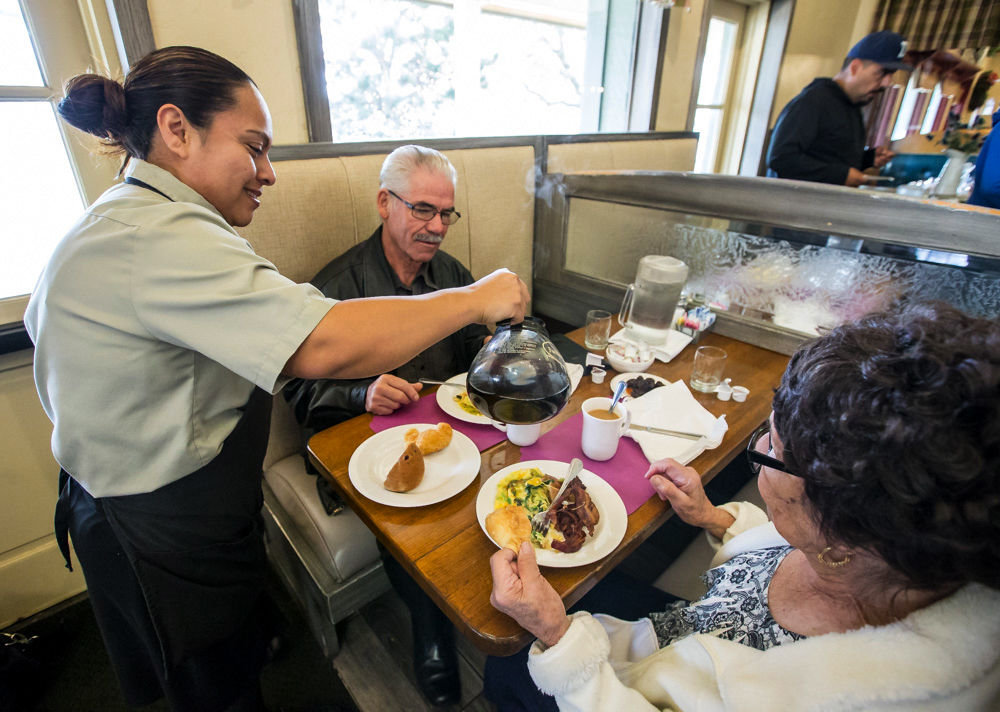 Jose Mendez and his mother, Esperanza Mendez, order their omelets during a Sunday breakfast at Hodel's Country Dining in December 2017.

Hurry up, it's breakfast time at Hodel's Country Dining, in this December 2017 photo.

Hodel's Country Dining's buffet offers a large choice of options, which continue to remain fresh thanks to the diner turnover, as shown in this December 2017 photo.

The north Bakersfield dining institution can, in a very real sense, trace its origins to the Spanish flu pandemic of 1918.

Today it totters on the precipice of commercial survival. The COVID-19 outbreak, and consequent, government-mandated countermeasures, have closed Hodel’s Country Dining, the buffet-style landmark, after 53 years, at least temporarily.

And the Hodel family really doesn’t know what comes next.

“Everything’s on the table,” concedes Bob Hodel, who opened the restaurant in 1967 and moved it to its present location just off Olive Drive, at Knudsen Drive, a year later. “Everything.”

The restaurant owes much to Hodel’s mother, Lydia Bartell Hodel, who learned how to cook out of necessity. When her own mother died in the pandemic of 1918, she, as the oldest of 11 children, took over running the household, including family food preparation.

Mother Hodel was the soul of her son’s kitchen from day one, and she didn’t stop cooking until 1988, if even then.

And now, as with Mark Twain’s comet, history repeats.

A number of scenarios could play out.

This persistent virus could prove no match for the herculean airlift that’s poised to deliver millions of vaccines to every corner of the country starting as early as Monday, and we could all be fighting for the last drumstick in the Hodel’s buffet line come Valentine’s Day. That's the best-case scenario.

Or, perhaps in April or May, we could all be queuing up, cafeteria style, deciding whether we want the masked server on the other side of the plexiglass to ladle out bleu cheese or ranch.

Or, we could be looking at limited-menu, family-style table service, with servers delivering large platters of fried chicken and braised beef that we then pass around among ourselves, a little like they do it in local Basque restaurants.

Or, we could be choosing from a wider range of offerings from a laminated menu — or the Hodel’s website, accessed through our smartphones — and receiving table service from waitstaff, like more traditional restaurants.

Or, we could be reminiscing about the goodold days as we drive past a familiar-looking restaurant with some other family’s name on it.

It’s all on the table.

“We are putting our heads together with some of our good help and we're talking,” said Hodel, whose restaurant, managed by son Don Hodel, closed after the last diners paid their bill Nov. 29. A few days later Gov. Gavin Newsom ordered all California restaurants to halt all dine-in services.

The last option mentioned here would be a wholly unsatisfying conclusion to a family business with a colorful history.

What Lydia Bartell didn’t learn in her family’s own kitchen, she learned from her first employer, Arthur S. Crites, a Bakersfield businessman and talented chef in his own right. He also happened to be a Republican Electoral College voter who had White House connections. “He brought back quite a few recipes with him (from Washington) that my mom used all her life,” Hodel said. “No kidding: The White House gravy was a big one.”

The same thick, white stuff Hodel’s slathers on its chicken-fried steak, we can therefore imagine, might on occasion have been placed in front of Warren G. Harding or Calvin Coolidge.

In the early 1930s, Hodel’s parents worked for William F. Gettle, a Bakersfield millionaire oil investor and J.C. Penney executive who took the young married couple with him when he moved to Beverly Hills with his disabled wife, Fleeta, and their four young children. Sam Hodel worked as Gettle’s chauffeur and his wife as cook and nanny. Her cooking must have been satisfactory; Gettle weighed 500 pounds.

Bob Hodel was born during their time in Beverly Hills.

Gettle died in 1941, not long after the Bartells moved back to Bakersfield. “It was the best move we ever made,” Hodel said. But his father was injured in an industrial accident in 1946, forcing his mother to take a job in the Greeley School cafeteria.

She stayed there 20 years.

“The PTA gave her a lifetime membership,” Hodel said, “and when they did, they said, ‘Mrs. Hodel, frankly, we are glad you're retiring. We are sick and tired of the kids coming home and saying, “Why isn't this food as good as at school?”’ One hundred percent of the kids ate the cafeteria. If you brought a brown bag, that was an insult to her.”

Her retirement was short-lived. Her son already had plans for her, having seen what she could do with an oven mitt and a head of steam.

“We'd have seven-course meals at home sometimes,” Hodel said. “Occasionally, she’d forget one in the oven.”

Bob Hodel had come up with the idea of opening a buffet-style restaurant, and in January 1967 he shared it with a Rosedale farmer named Leo Smith. “I said, ‘Leo, would you invest in me?’ And he said yes. March the 7th, I could show you my original checkbook; that’s when I deposited $200 and then paid Earl Gibbons, the former judge, $150 to incorporate.”

Hodel’s neighbor, Jack White, worked for the Dorman Co., a renowned architectural firm, and he specialized in restaurants. He took Hodel under his wing.

“We would go down to the Dorman Co. in Los Angeles — leave at 3 in the morning and be there before 7,” Hodel said. “We were there for about six straight weeks, drawing up the plans for the Valley Plaza operation.”

That first staff included a dynamic trio in the kitchen: two aunts, Viola Funk and Hulda Bartell, and Mother Hodel.

“Buddy, she knew her way around the kitchen,” Bob Hodel said of his mother. “She would cook and cook and then if she had a little bit of time, she'd wash her own pots and pans.”

Her influence was still on the menu long after her passing in 1993. Colonel Sanders had his closely guarded 11 herbs and spices; Mrs. Hodel had her unique fried chicken recipe as well. Hodel’s cinnamon rolls are also straight from her kitchen repertoire.

They quickly outgrew their first location at Valley Plaza, in the old Mayfair Market, and moved to a better opportunity at Olive and Knudsen in what had been the Cookery Coffee Shop.

“Dean Gay — he was my friend and my lessor there — told me they weren't paying their rent and asked me if I could take it over,” Hodel said. “I said I would if they would build a banquet room off to the side.”

Over time, the Hodels did more than that.

“That little cafe — it was just like a little rectangle when we moved in,” said Muriel Hodel. “And then, gradually, we added different parts of it — enlarged it in different sections of time.”

“I was accused of being a perpetual remodeler,” Bob Hodel said. “It's probably four times the size of the original building, counting the back Kern Room, which was once a hair salon, Arnold Palmer's Cleaners and the Bachelor Bar, all owned at the time by Dean Gay.”

They grew more than the building. Son Don came along in 1961; daughter Rebecca appeared in 1963. Muriel waitressed now and then, but she mostly stayed home to raise them.

The Hodels have been married 60 years.

Through the years Hodel’s Country Dining has become not just a lunch hot spot favored by blue and white collars alike, but a Sunday-after-church mecca and meeting headquarters for every local organization from Rotary to the Sierra Club.

Banquets, Bob Hodel said, represent 40 percent of the company’s business — and their absence has been devastating.

In response, the company has listed its Liberty Hall banquet building, the old grocery store and bingo hall it acquired about 15 years ago, with a real estate broker. They figure the sale can help them retire the debt on their other property.

“We're fishing out there for now, seeing what's out there,” Bob Hodel said. “If we do sell that, well then, we would have a lot less fixed costs. And maybe a little smaller operation.”

Hodel’s is clearly at a crossroads.

Whatever happens, none of what got them to this point would have been possible without the goodwill they’ve sown over the years.

“I have loved my city for 80 years. I grew up at the corner of Brimhall and Nord Road. I had the Kern River and Jerry Slough for a backyard,” said Bob, who marched in the Driller Band under the legendary Col. Wesley Moore and, after a Korean War stint in the Army, played football at Bakersfield College and then UC Davis.

“This town just slowly opened up my future for me,” he said. “I could name some mentors, people who for a long time helped make it possible. I am just thankful for what this town has given me.”

“It's been a good life,” said Muriel, a member of North High School’s first graduating class of 1957. “I love my husband, and he loves taking good care of me.”

Let the record show that, no matter where the pandemic of 2020 might take us, the Hodel family has loved taking care of us.