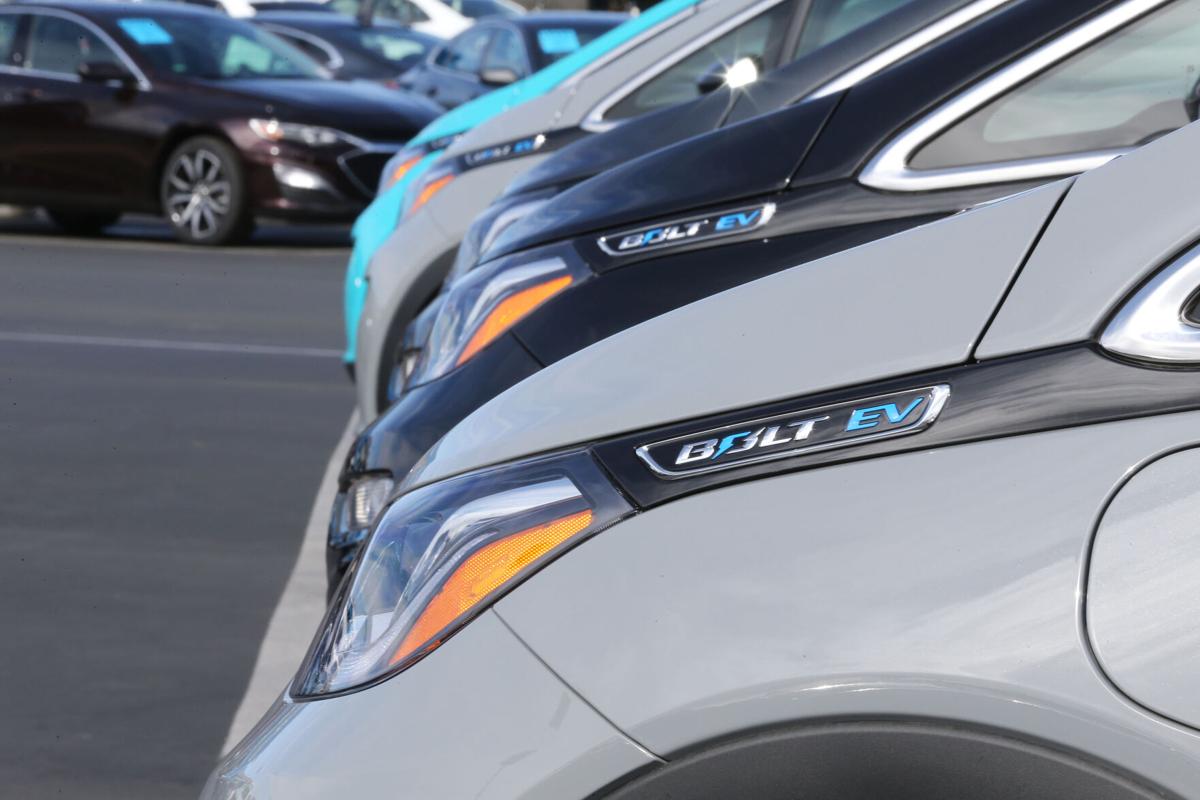 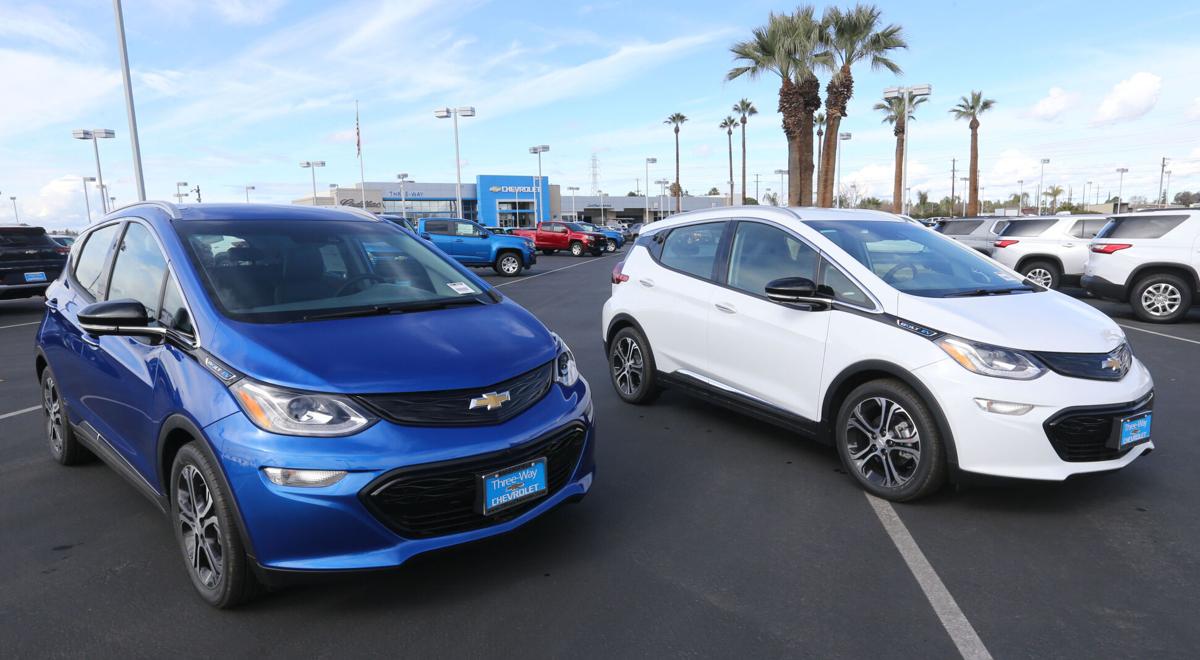 A couple Chevy Bolt electric vehicles were on display in the Three-Way Chevrolet parking lot on Friday. 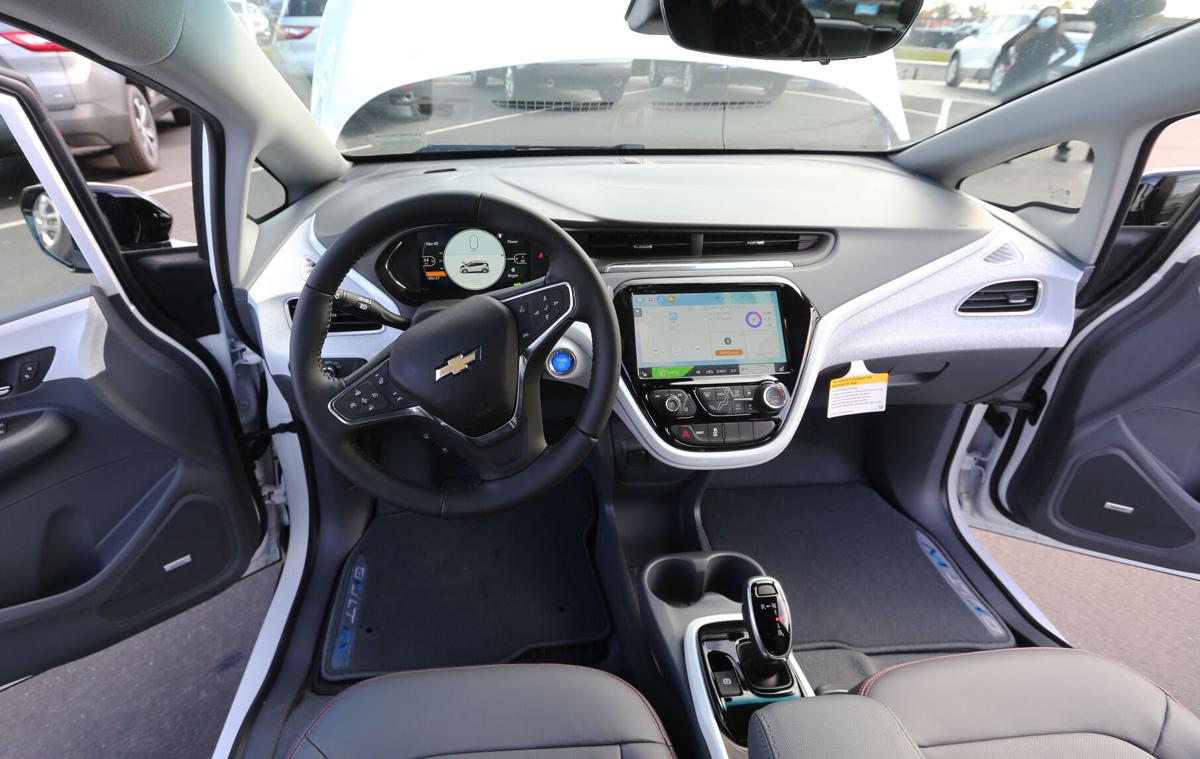 An inside look at a Chevy Bolt electric vehicle at Three-Way Chevrolet in Bakersfield. 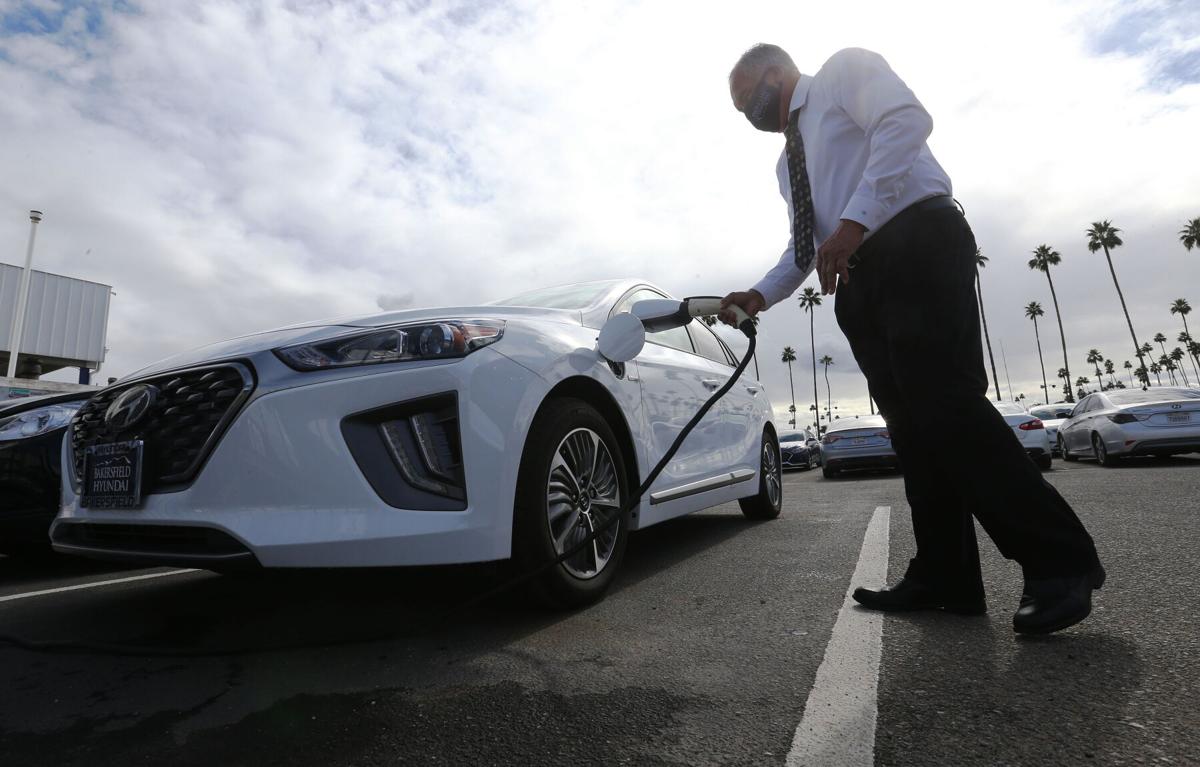 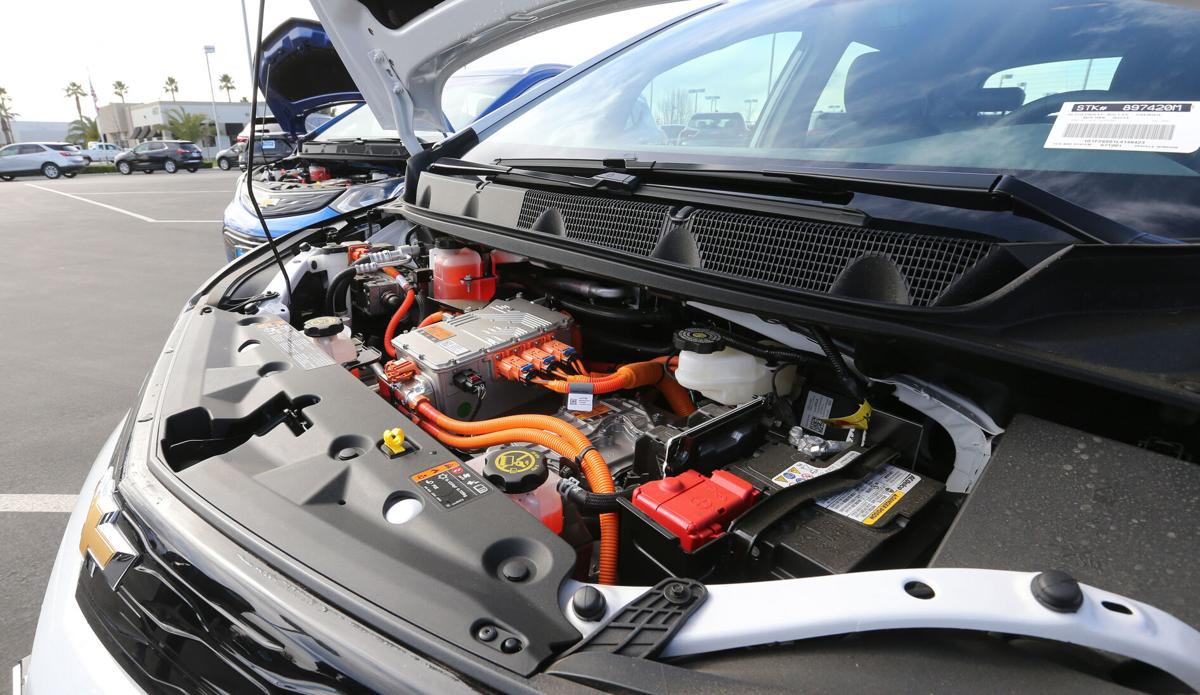 Three-Way Chevrolet has over a dozen Chevy Bolt electric vehicles available for purchase. 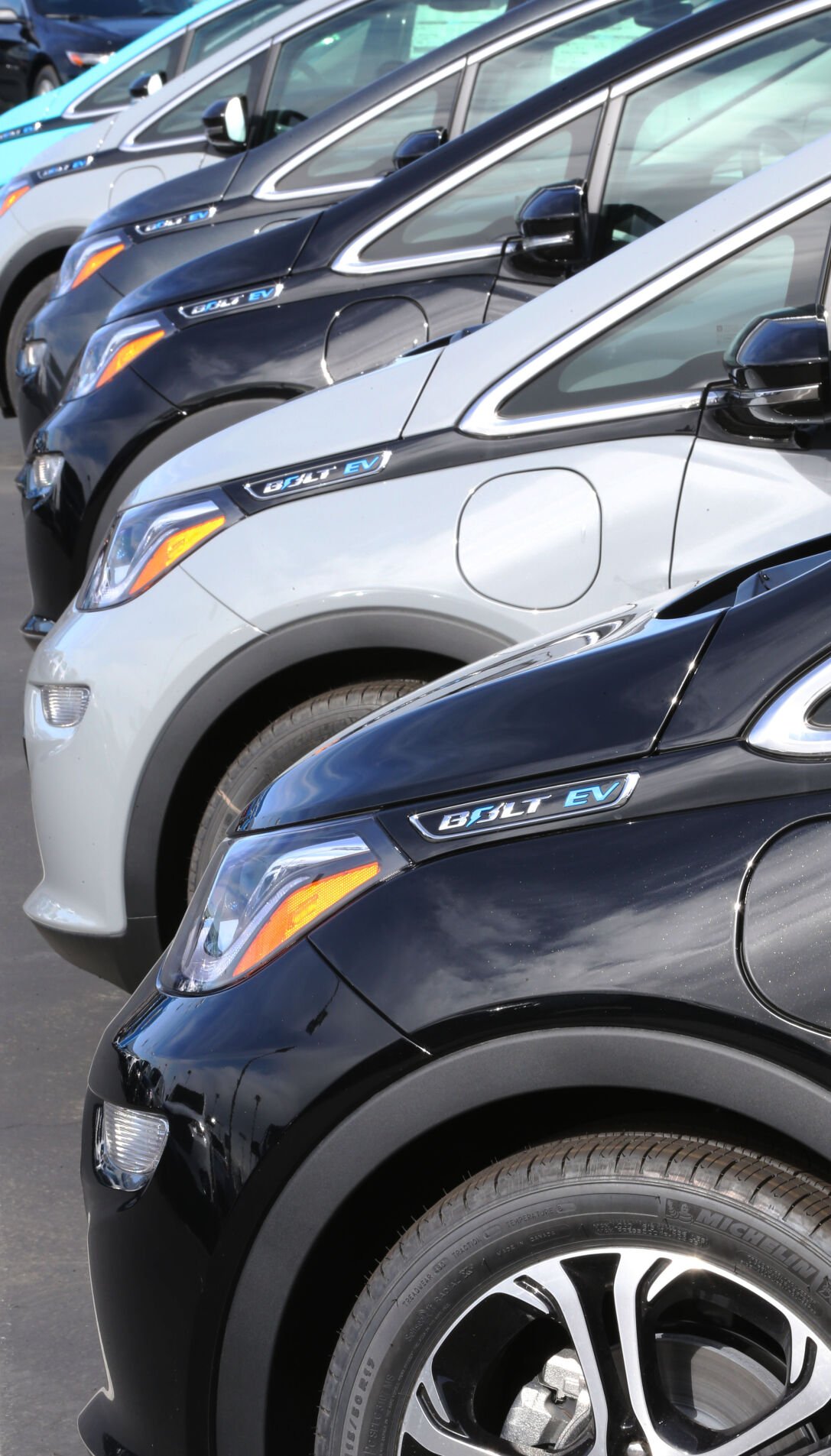 A couple Chevy Bolt electric vehicles were on display in the Three-Way Chevrolet parking lot on Friday.

An inside look at a Chevy Bolt electric vehicle at Three-Way Chevrolet in Bakersfield.

Three-Way Chevrolet has over a dozen Chevy Bolt electric vehicles available for purchase.

State government has been gradually trying to suffocate the Kern County oil industry for years now as part of its effort to control greenhouse gas emissions. Two years ago, it tightened its grip, creating a pair of multi-agency teams specifically tasked with managing oil’s demise.

Then came President Joe Biden, elected on the strength of two promises above all others: One, he will not be Donald Trump, and two, he intends to aggressively tackle climate change. Biden immediately returned the U.S. to the Paris climate agreement, signed executive orders declaring climate an "essential element" of foreign policy and national security, and ordered a moratorium on new oil and natural gas leases on federal lands.

Now, private industry has joined the cause with a dramatic, single stroke both symbolic and concrete. If the clock had not already started on the most sweeping change in the history of human energy production and consumption, it has now.

General Motors, the biggest manufacturer of automobiles in the biggest automobile market in the world, announced last week it will no longer build gasoline- or diesel-powered cars and light utility vehicles after 2035 and will be, by 2040, carbon-free.

As influential as government dictates can be, nothing sways the market like the push of the private sector.

And, as the Kern County oil industry will have to more seriously acknowledge, nothing influences the private sector like changing demand.

“Oil producers are probably going to look to see what happens with the rest of the auto industry,” said Richard Gearhart, an economics professor at CSU Bakersfield. “GM could be making a play to be known as that first company that attempted to save the earth and get those millennial customers. But if I were the oil companies, I'd be really worried about other big auto companies — Ford, Honda, Hyundai — coming out and doing the same. If that's the case, then oil in the next two decades is going to look dramatically different than what it is right now.”

In 2019, of the country’s 7.5 billion barrels of total petroleum consumption, 45 percent was gasoline and fuel ethanol and 3 percent was passenger-vehicle diesel. If indeed the world’s other car-makers get in line — and some foreign and domestic manufacturers are already further down this road than GM — half of the demand for Kern County’s No. 2 commodity will be gone in 15 years.

Considering the pressure being applied elsewhere to minimize or eliminate the use of other petroleum products such as heating oil and some of the dozen or so other broad categories, oil’s future is potentially bleak.

“It's essentially the elimination of American oil production, especially given that current environmental regulations are only going to get more stringent,” Gearhart said. “... You start to see a lot of oil companies decrease the number of wells they want to drill, probably start closing up some existing wells, and either move to those low cost areas that are still around in the U.S. — Texas — or to different countries. … The oil industry is on the mat after getting punched by Mike Tyson and I don't know if they're going to get up.”

John Pitre, chief operating officer at Motor City GMC and an observer of the retail car industry for more than 30 years, said the U.S. is at a transportation crossroads.

“We’re in an interesting place,” Pitre said, “probably reminiscent of what was happening back in the early ’teens — you know, 1910 to 1925, when the transportation industry lost the horse and gained the car. We're probably at just as big a change in the next 15 years as they saw during those 15 years.”

The wholesale transition to electric vehicles, however, has some infrastructure hurdles in California, he noted.

“California is a little bit of an enigma at the moment because we have some electrical power challenges,” he said, referring to the state’s fragile power grid. “That question has to get answered because it’s part of the equation: Where and how are they going to be charged and is (the burden of millions of new EVs) going to crash our grid? (That's especially true) in rural areas where there's already power supply issues.”

But, as much as Kern County is built to run on oil, Pitre said, opportunity is already here in abundance with well established industry footholds in solar, wind and, “as the breadbasket of the world, the potential for biodiesel ethanol. Maybe Kern County really is the business model for transportation in the future because we can cover all the bases.”

Don’t expect the oil industry to take all this lying down. As the Washington Post reports, the oil, gas, and coal companies “and their allies are aiming to slow Biden’s unprecedented push for climate action and keep profits from fossil fuels flowing.” Expect a marketing campaign that will sell the public on the premise that liberals are trying to take their jobs.

Thing is, GM’s move underscores the fact that the market is traveling in the same direction as the political environment, and that represents a tsunami of inevitability. GM and other major manufacturers are not oblivious to the fact that Tesla sold a half-million cars in 2020 and is now worth substantially more than GM.

The electrification of the U.S. highway will in fact take U.S. oil jobs. The good news is that it will create others. Kern County has a window — a small window — to start figuring out how to compensate for the inevitable decimation of its oil industry, whether it takes 15 years or 50. And though many may be loath to look to the government for logistical and regulatory assistance in this great transition, it seems only fair to point out that if government intends to taketh away, so too should it be willing to giveth. Starting soon.