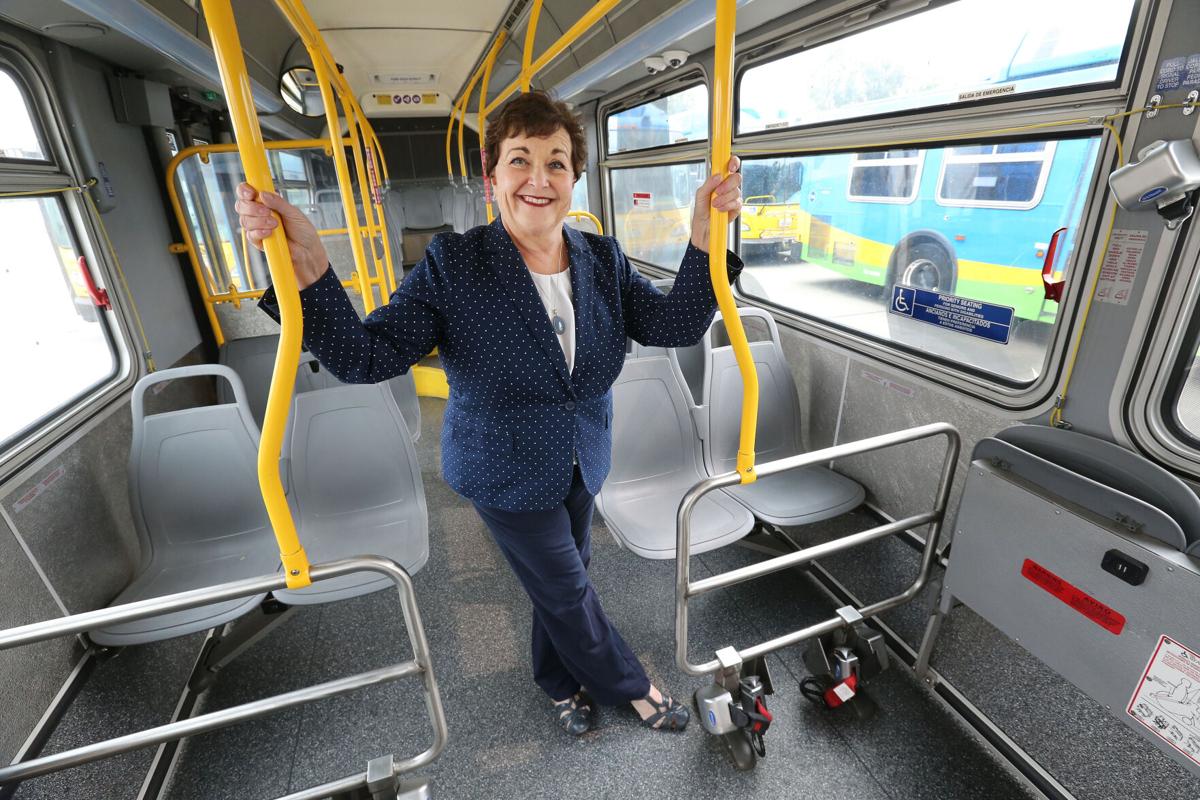 Golden Empire Transit CEO Karen King acknowledges that public transportation, along many other entities in the country, will face a new reality in the current and post-COVID-19 world. 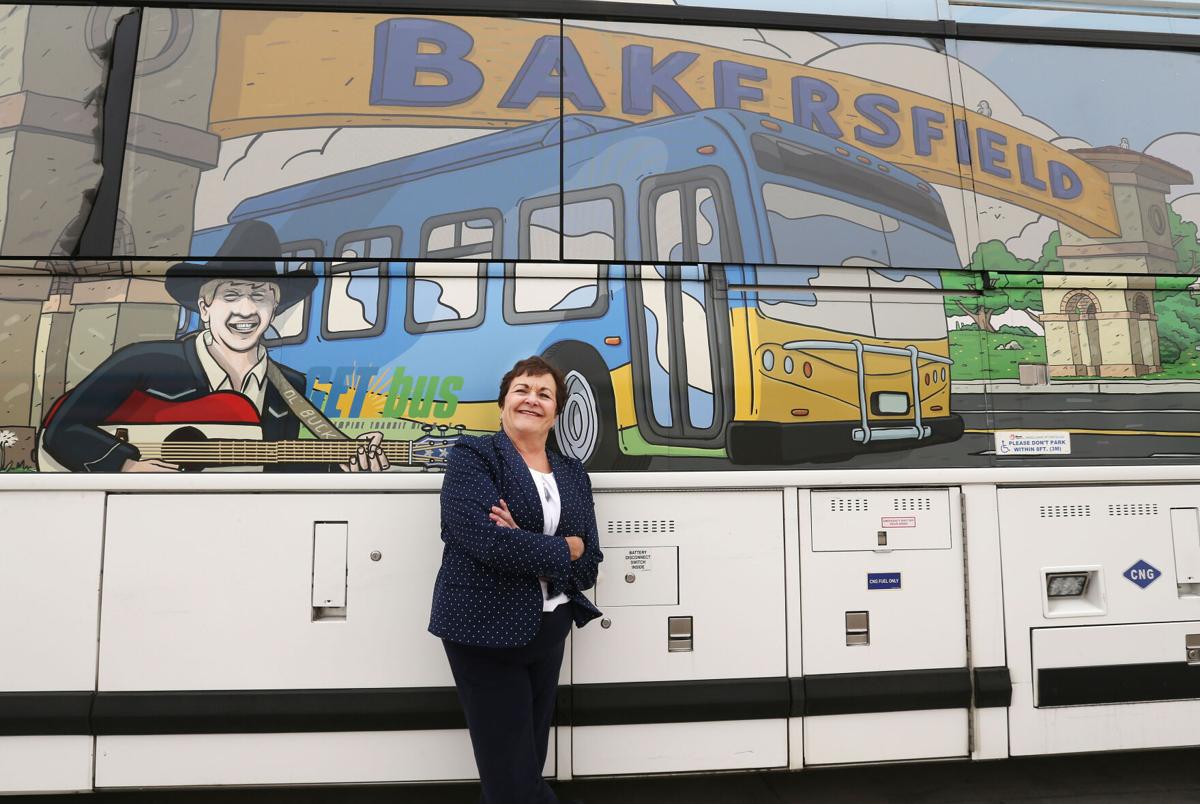 Golden Empire Transit CEO Karen King poses in front of a GET bus on Friday morning at the company's Bakersfield headquarters on Frontage Road off Golden State Avenue.

The GET bus stops in front of McDonald's on North Chester Avenue to pick up riders before heading downtown in this 2016 file photo. 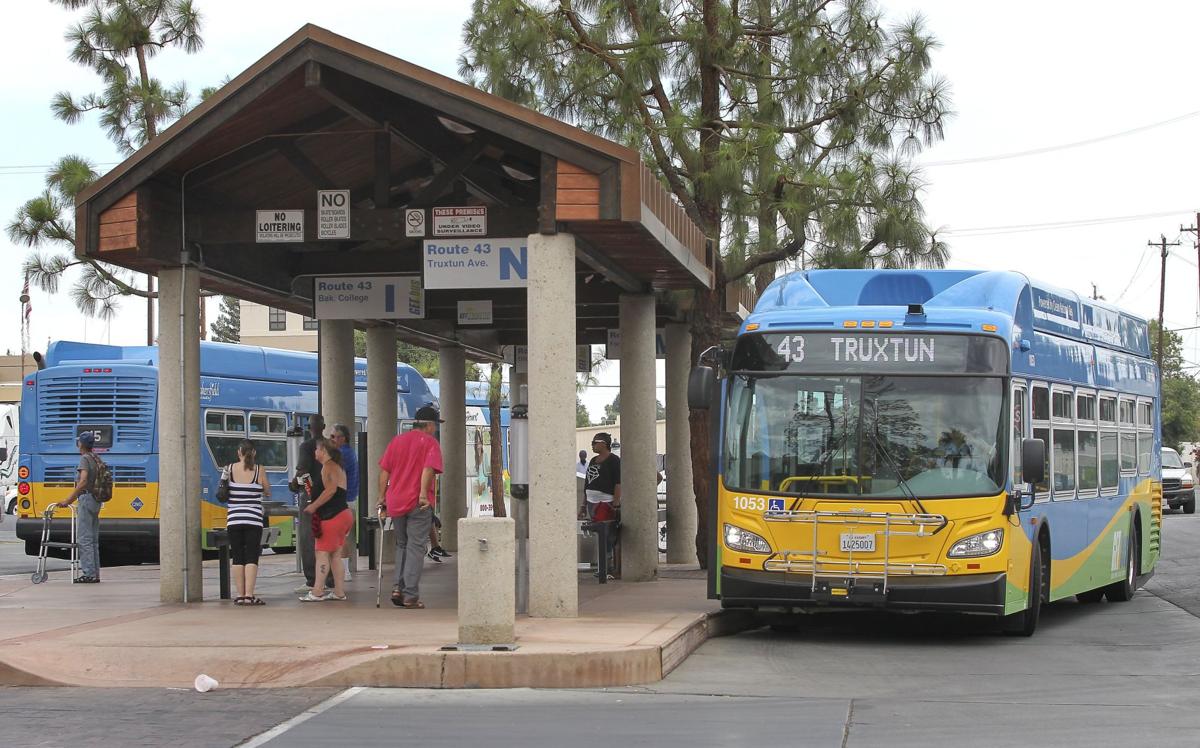 The GET bus station in downtown Bakersfield was busy with activity in this 2014 file photo.

Golden Empire Transit CEO Karen King acknowledges that public transportation, along many other entities in the country, will face a new reality in the current and post-COVID-19 world.

Golden Empire Transit CEO Karen King poses in front of a GET bus on Friday morning at the company's Bakersfield headquarters on Frontage Road off Golden State Avenue.

The GET bus stops in front of McDonald's on North Chester Avenue to pick up riders before heading downtown in this 2016 file photo.

The GET bus station in downtown Bakersfield was busy with activity in this 2014 file photo.

But it’s generally a good pinch. A hopeful pinch.

On one hand, the metro bus system must deal with a 2-year-old state mandate that requires GET to replace its fleet of more than 200 buses and shuttles with an all-alternative-fuel fleet by 2040. Cost: Roughly $154 million.

On the other, bus system management must figure out how to maintain that fleet without yet knowing precisely where, when or how it may start dispensing the juice to make those GET buses go.

The second part of that equation rests on the shoulders of the embattled California High-Speed Rail Authority, which has notified GET it will at some point purchase the bus company’s humble but substantial headquarters on Golden State Avenue — actually, a somewhat hidden frontage road immediately north of Highway 204 — and flatten it to make way for its Bakersfield rail terminal a few hundred yards east. Target construction year: 2028.

Fine, but when can GET move ahead with the associated $11 million upgrade and relocation of fueling infrastructure to make those required alt-fuel buses move? It makes no sense to invest at the present location. And the rail authority hasn’t really said when to expect the check.

“Our board is hesitant to invest that funding (for fueling infrastructure) into our existing location knowing we’re going to be relocating,” says GET Chief Executive Officer Karen King.

If that were GET’s only concern about public transportation’s fast-evolving future, it might be enough to keep King up at night.

But the fact is, it’s only one of several uphill grades for the bus company to negotiate in the coming years.

Public transit systems are changing the way they collect fares, interact with other modes of transportation, compete with app-based ride-hailing services like Uber, and adjust to other technological innovations such as autonomous vehicles.

And that was before the COVID-19 pandemic came along. If you thought Golden Empire Transit buses seemed sparsely filled before the coronavirus supercharged the already growing work-from-home trend, take a look at some of them now.

With roughly 40 percent of U.S. workers working from home, office buildings are quieter, traffic is lighter and commuter buses have more empty seats than even before.

“We had a 20-year plan that included expanding our route bus service ... and hopefully getting some bus-only lanes,” she says. “But this whole pandemic thing has really caused us to pivot and rethink that.”

One key pivot will be toward the type of on-demand service that has made services like Uber and Lyft so successful. It’s known as microtransit, and GET, like dozens of bus companies across the country, has waded in with an on-call van service called Ride, which delivers customers curb to curb for just $3.50 per person.

“While I don't think we want to take a public position on what's going on with Uber and Lyft in the state (with regard to California’s AB 5, the “gig-work” law), we do see some opportunity,” says King. “If their (ride-share) service were to become limited in Bakersfield, our Ride program would probably really explode.”

For now, it’s available only in portions of southwest Bakersfield, but King foresees possible expansion into other parts of the city in coming months.

Microtransit is just one aspect of a wholesale revolution in commuting, according to Paul Comfort, a Maryland public transit executive, podcast host and author of the 2020 book, “The Future of Public Transportation.”

For starters, bus service could one day be free.

Comfort foresees “the death of the farebox,” noting that the Los Angeles and Kansas City metropolitan transit agencies are both task-forcing the possibility of going fare-free.

Comfort, the former CEO of the Maryland Transit Administration, says public transit is often viewed much like a county golf course: heavily subsidized by local government but still reliant on daily-use green fees.

Comfort says he sees four major trends coming to public transit in late 2020 and into 2021.

Microtransit is one, especially shuttle services that use technology to triangulate the pickup locations of riders, perhaps co-workers, going to the same destination. Another is driverless shuttles, an innovation that might prove useful as a so-called “last-mile solution,” taking people, for example, from their homes to a rail station and back again at the trip’s conclusion.

Another is zero-emission vehicles: electric battery buses, compressed natural gas-fueled buses and hydrogen-fueled buses of the type GET is currently exploring.

A zero-emission bus system “helps us turn the narrative of public transportation having been, during COVID-19, a petri dish for germs,” Comfort says. “You know, be very careful if you're riding public transit. ... One of the ways we turn that narrative around is with clean fuel. You can finally see the skyline of L.A. Public transit gets us there, especially with zero-emission buses.”

The fourth trend is contactless fares, another innovation inspired by COVID-19 that will without question survive the pandemic.

“You can use your phone now to pay for your fare, or you tap and go with a card,” Comfort said. “Some places like Vancouver, Canada, are talking about using wearables — where you have a bracelet or a necklace with a chip in it.”

So many challenges, so many potential solutions. The next year will be interesting as the U.S. begins to negotiate a post-COVID-19 world (or at least a better-managed COVID-19 world) and the “mass” in “mass transit” continues to be viewed through this new lens.

At GET, where ridership is down 70 percent from the last full fiscal year’s farebox total of 6 million rider-trips, something has to change.

And though the taking-their-time management of the High-Speed Rail Authority isn’t the only entity holding cards in this game, they’re holding crucial ones.

“It's been difficult,” King says. “It's such a political project and such a political process, but we have had assurances from them that there is funding to acquire right of way for the Bakersfield station. So it's a matter of lighting a fire under them and getting it done. ... We're kind of in limbo right now.”

Clarity? Don't think so. Uncle Joe doesn't even know where he's going to be the next day, per a news conference comment he made recently.

Of course, Trump is totally organized. Want to rake some leaves to stop forest fires?

If you ever own a cabin or go camping in the forest you might want to brush up (NPI) on protecting your perimeter from fire.