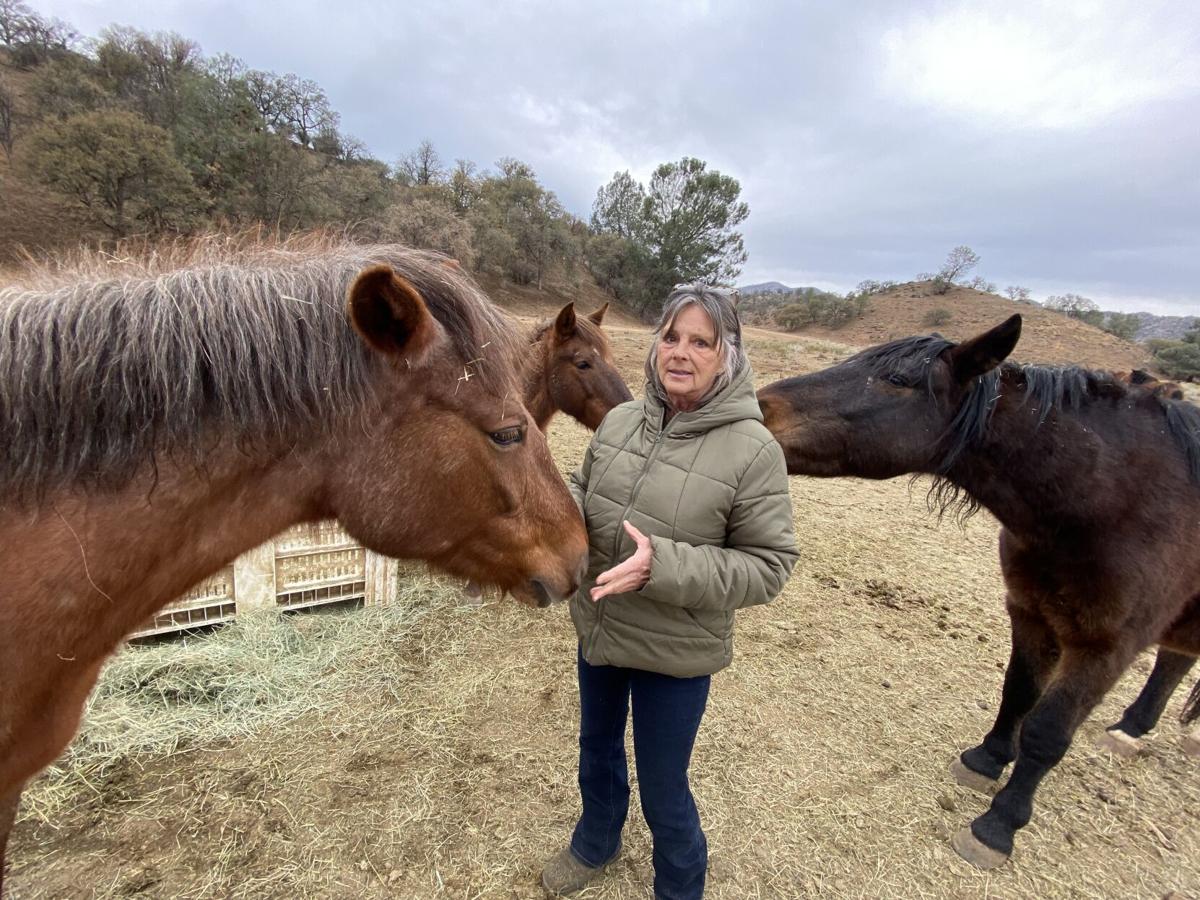 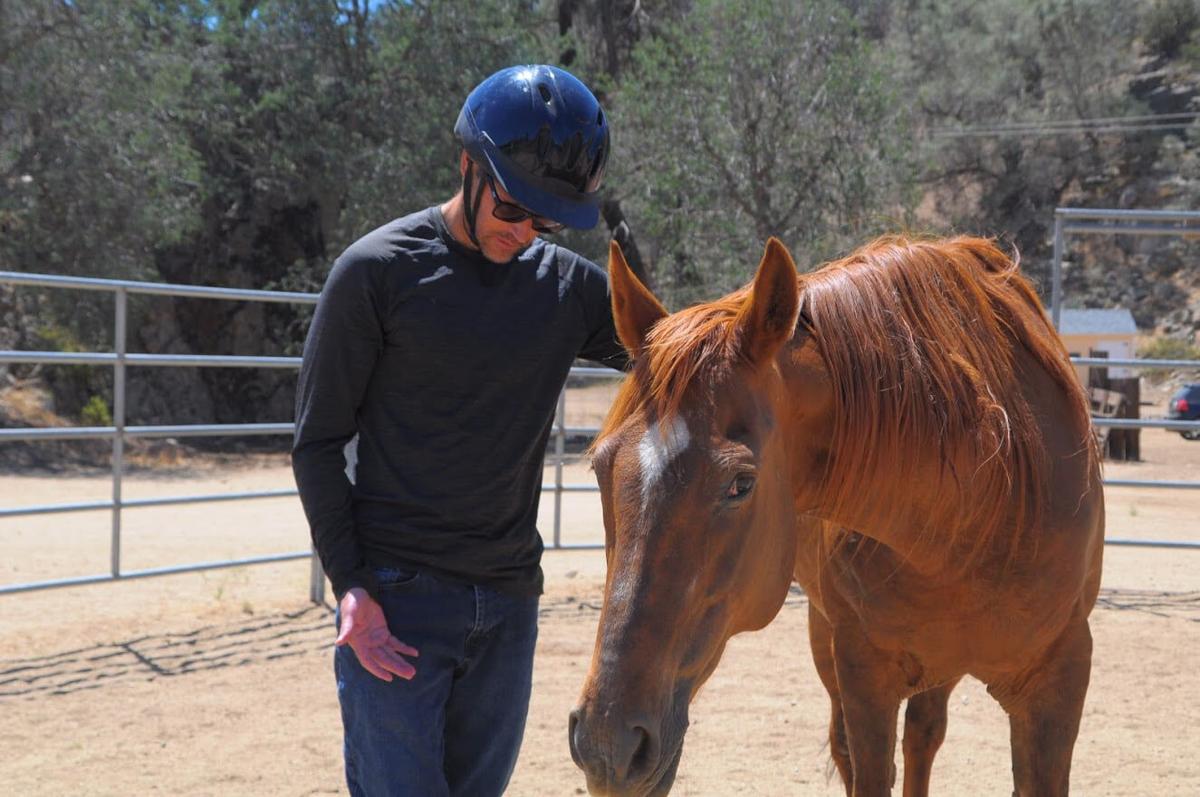 Spicy has found a new home at Lifesaver's, working with the nonprofit's equine therapy programs that help veterans who have PTSD. 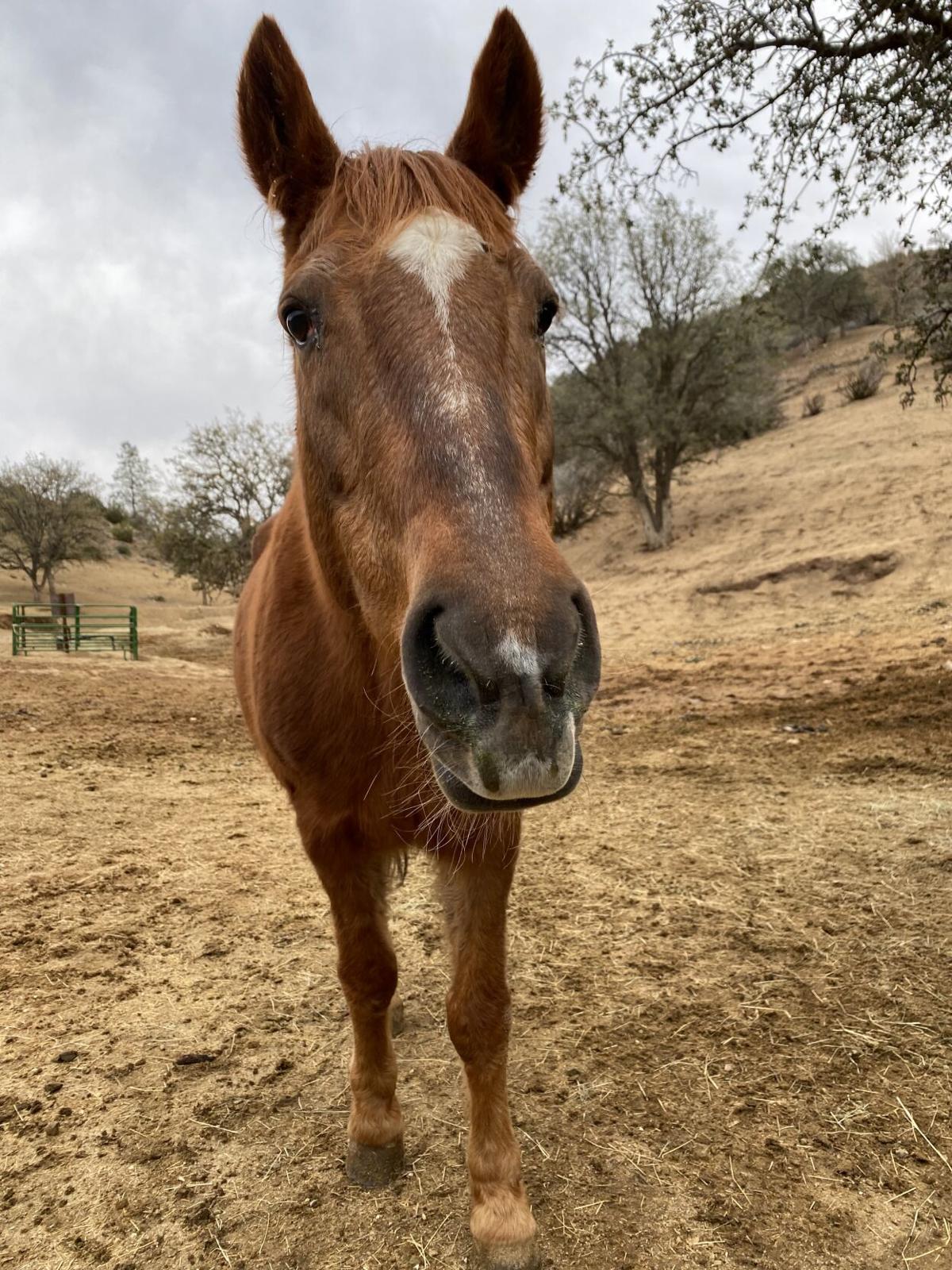 Getting close to Spicy takes time because she has trust issues, according to Jill Starr, founder and director of Lifesaver’s Wild Horse Rescue in Twin Oaks.

Spicy has found a new home at Lifesaver's, working with the nonprofit's equine therapy programs that help veterans who have PTSD.

Getting close to Spicy takes time because she has trust issues, according to Jill Starr, founder and director of Lifesaver’s Wild Horse Rescue in Twin Oaks.

I did not want a horse.

But animals just find me somehow.

That’s how it was with Spicy, or Lena, or Lois, as she’s now called, much to my chagrin.

I grew up with horses and I like them. But they’re expensive and need a lot of time and attention. As a full-time newspaper reporter back in 2012, I had neither the time nor the money for a horse.

When my neighbor, Hank Otten, knocked on the door, I was expecting some of the yummy barbecue he sometimes brought over. Instead, he asked me for a favor, a big one — take his horse, please.

Hank was moving. He had left his job with John Deere and was about to start a new venture in Big Pine, on the east side of the Sierra. That venture turned out to be wildly successful, and if you’ve ever driven through Big Pine to Mammoth, you’ve probably smelled Hank’s cooking at the Copper Top BBQ.

To get there, though, he needed to leave Bakersfield behind. And his horse.

Hank had adopted the horse from the Bureau of Land Management in the early 2000s and named her Lena. But he and his sons had busy lives and not much time to work with a wild horse.

I mentioned earlier that I grew up with horses. I should have said “domestic” horses. That’s not Spicy. The most I was ever able to accomplish was getting a halter on her. Leading her anywhere in it was a no-go.

Time went by and we settled into a kind of detente where I could feed her and brush her when she allowed but otherwise we kept to opposite sides of the pasture. Most days, she stood in the corner looking at the other neighbors’ horses. She was lonely. Then she got a cut on her leg that she wouldn’t let me tend, and I knew that giving her truly proper care was beyond my abilities.

I called every horse rescue I could find but was turned down. Ironically, it was because I actually was caring for Spicy and most rescues are overwhelmed with horses that are horribly abused or neglected.

Then I came across Lifesaver’s Wild Horse Rescue in Twin Oaks. They likewise turned me down for similar reasons. Even so, we kept in touch and I ended up doing a story on one of their programs helping combat veterans with PTSD by having them work with mustangs.

One of the veterans, Adam Gorey, a former tank commander who served in Iraq in the 1990s and again in the early 2000s, explained that the vets and the mustangs had a lot in common. They’re both part of a larger group with strict rules and hierarchies. Then suddenly, they’re snatched away from that world.

For veterans, they go from combat to civilian life. Mustangs go from the wild to a corral.

“They have issues, too,” Gorey told me.

I tried to apply what I’d learned from doing that story but, frankly, I’m no horse whisperer. So, the detente continued until this past May, when I posted a photo of Spicy’s hooves on Facebook asking for farrier recommendations.

That’s when Jill Starr, founder and director of Lifesaver’s sent the simple but life-altering message: “I think it’s time I make room for her at the sanctuary.”

In the years since I wrote about Lifesaver’s, the program has grown. It still has its 45-acre training and adoption center in Lancaster. The Twin Oaks sanctuary, where unadoptable horses are allowed to live out their days, has expanded from 160 acres in 2003 to its current size, 1,100 acres.

Lifesaver’s still plans to keep up its veterans programs. But with COVID, it’s been tricky. The program typically hosts eight to 12 veterans for three nights at Lifesaver’s lodge just outside of Twin Oaks, and that can be close quarters. So, programs are on hold, which is tough because there’s a waiting list. PTSD doesn’t ease up during a pandemic.

California’s drought has also been difficult for Lifesaver’s. Each horse takes about 10 gallons a day and with 400 horses, that’s a lot of water. Flows from some of the sanctuary’s wells were reduced to a dribble, and a new well drilled this year came up dry.

In all, it costs about $2 million a year to keep Lifesaver’s running, Jill said. It’s a lot of money and a lot of work. But it’s also Jill’s passion.

She adopted her first mustang in 1995 and was amazed at the connection she made with an animal that had no prior human interaction.

“As I got to know more about mustangs, I realized they had a really bad reputation,” Jill told me on a recent visit. “People thought of them as worthless, no better than desert rats.”

Twenty-five years later, she’s still as passionate about the horses and the message.

“Somewhere along the way, through the years, I started realizing that the tables were beginning to turn,” she wrote recently on Lifesaver’s Facebook page. “The lives that were being saved were, in fact, the very people who reached out to help these horses.”

So, I knew “my” Spicy (I don’t think a mustang truly belongs to anyone but themselves) was in the best of hands when Jill messaged me.

They even gave Spicy a “job” in June, working with veterans during Lifesaver’s most recent program. In the Facebook photo they posted, Spicy looks OK-ish with the veteran who’s petting her, but still ready to bolt.

“She wants to be with humans,” Jill told me. “She just has trust issues.”

Yup, that’s Spicy. Well, Lois. Since Lifesaver’s already had a Spicy in the herd, they had to come up with something else.

As Jill recently drove me to the 40 acres of rolling, oak-studded land where Spicy now lives with her new herd, I wondered if she would remember me, if she would think I had abandoned her — if she’d kick me in the butt again, like she did when I tried to give her deworming meds once (sigh).

Spicy pricked up her ears and came trotting toward me when I called her. She plowed past the other curious horses and came right to me. Not for pets or nuzzling, of course, she wanted the bag of carrots in my hand. After furiously munching up everything I had, she left to check out a bin of hay.

I called her again and she turned back. It’s silly to say that the way she looked at me and twitched her ears, it seemed like she was telling me she was happy and had finally found her home.

Silly or not, I believe it.

Lois Henry is a former longtime Californian journalist. After leaving the newspaper, she launched SJV Water, a nonprofit, independent online news publication dedicated to covering water issues in the San Joaquin Valley. The views expressed here are her own.