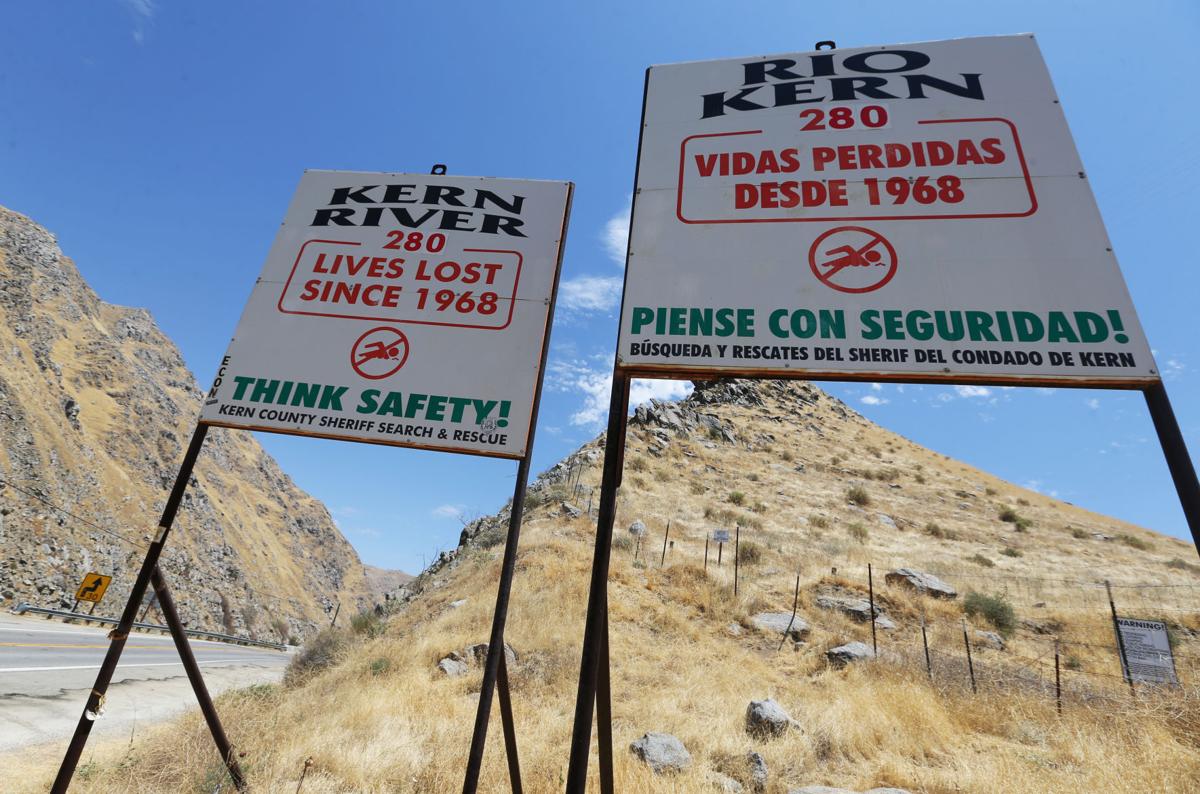 Despite warning signs at the mouth of the canyon, people are still using the dangerous Kern River to cool off. 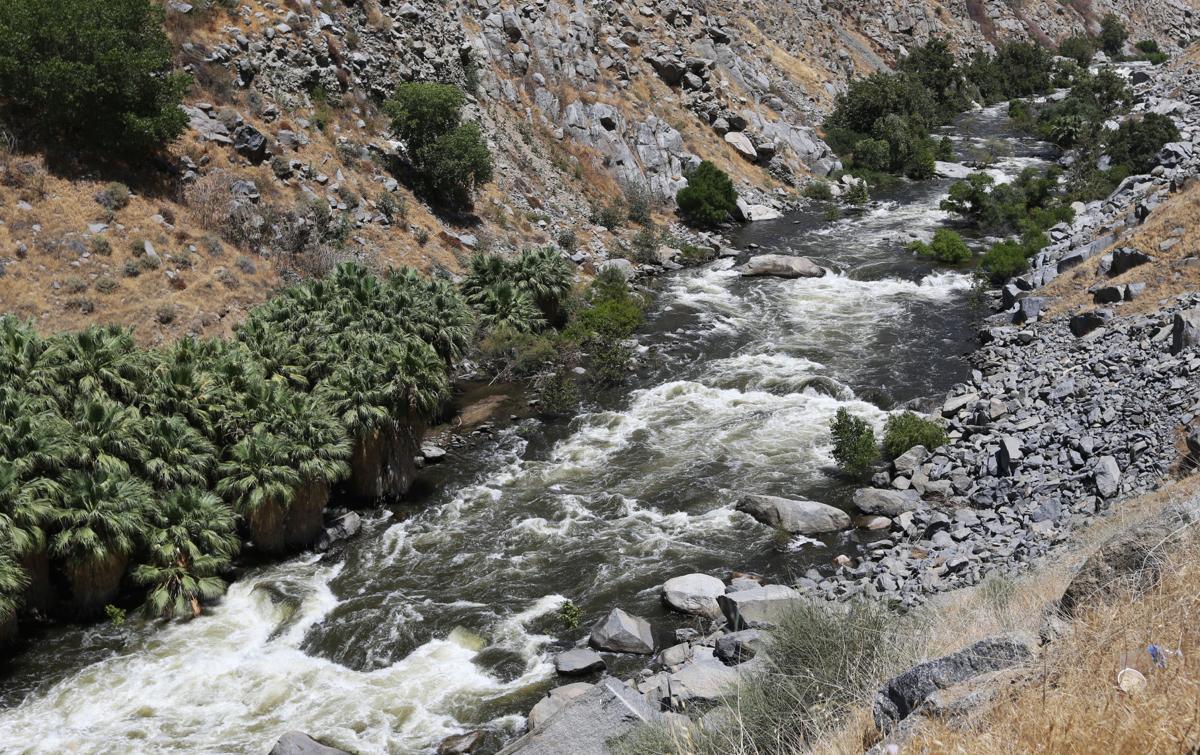 Looking up the raging Kern River from the mouth of the canyon. 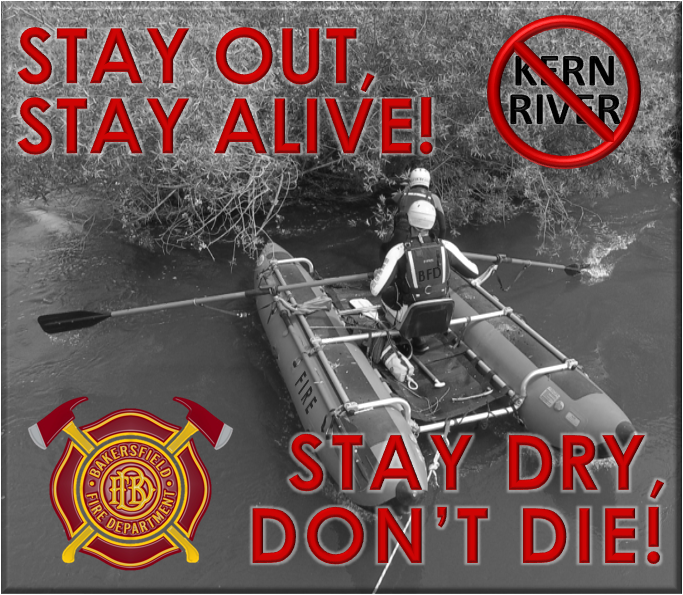 The Bakersfield Fire Department has used social media aggressively to warn people about the dangers of the Kern River this year. 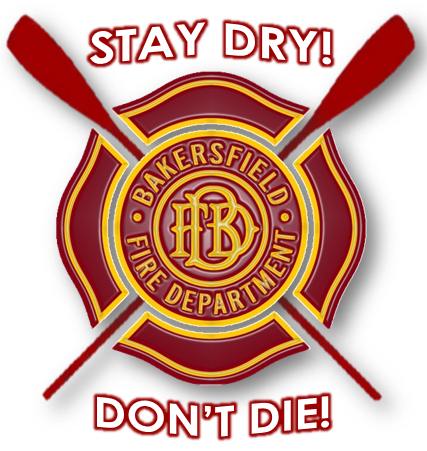 The Bakersfield Fire Department created a logo to warn people about the dangers of the Kern River.

Despite warning signs at the mouth of the canyon, people are still using the dangerous Kern River to cool off.

Looking up the raging Kern River from the mouth of the canyon.

The Bakersfield Fire Department has used social media aggressively to warn people about the dangers of the Kern River this year.

The Bakersfield Fire Department created a logo to warn people about the dangers of the Kern River.

Another hot weekend, another drowning in the Kern River.

So far this year, that makes 11, with three missing.

And still the Kern County Board of Supervisors has done nothing.

Oh, yes, Supes are “considering” options — possibly some signs by popular spots on the river or charging folks who have to be rescued.

The drownings and massive rescue responses started two months ago and Supes just broached this topic last week, right before the board went dark this week and next.

The earliest they’ll get back to it is Aug. 8.

Way to respond to an emergency, guys.

Even though the City of Bakersfield has jurisdiction over a smaller portion of the river, the Fire Department has been extremely active posting warnings on social media, issuing a statewide alert and public service announcements.

The department, along with a Search and Rescue coordinator in the Sheriff's Office, even sought out the host of an annual boozy river float that attracts thousands each year to give a stern warning about what could happen in the swollen river this year.

The city is also working with Caltrans to see if it can post warnings on its digital signs, according to City Manager Alan Tandy, who added that even though city funds are short, staff has been trying to get the word out in other ways.

I applaud the city’s efforts.

And I’m really impressed by recent actions on the part of nonprofit Clinica Sierra Vista.

Clinica will have five billboards, two in Spanish, up around town by the start of next week.

It’s also preparing radio advertisements and a social media campaign warning people that if you challenge that river, the river WILL win.

“The Kern is deadly,” the billboards say. “No matter how irresistible it looks — resist.”

Instead of clucking about how awful all these drownings are, Clinica has moved quickly and decisively to get the word out in a big way to people who are just hoping to cool off as summer continues to bake us in 100-plus degree temperatures.

Truly, I cannot thank Clinica enough for taking this on.

Now, speaking of charging people who have to be rescued, which was suggested by Supervisor David Couch, that’s a topic that’s come up before and I don’t think it’s worth our time to revisit.

Even Sheriff Donny Youngblood, who doesn’t have much sympathy for people who go in the river when it’s this obviously dangerous, was hinky about charging.

“If there’s a mechanism for charging someone who’s been irresponsible, I wouldn’t be opposed to that,” Youngblood told me when I wrote about this back in early June. “But how do you tell a family who’s just lost a child, ‘Hey your kid’s dead and here’s a bill for $7,000?’ I’m not in favor of doing that.”

Couch seemed to suggest the fee could be used as a greater deterrent.

Such as, posting signs warning people to stay out of the river and that if they don’t they could be liable for the costs to save them.

OK, but what about just posting some signs already?

There are signs about the feral cats in Hart Park but nothing about the river. Sheesh.

Anyhow, the county would have to pass an ordinance to be able to charge such a fee and that could take months.

It’s clearly not that difficult, or costly, to pull together a simple advertising campaign to get people’s attention.

The county should piggyback on Clinica’s start and buy more billboard space and more radio time, especially on Spanish-language stations in southern California.

Supervisors could each take a little from their discretionary funds and get an ad campaign going in no time.

And, believe me, they have the money.

Supervisor Mick Gleason, whose district includes the Kern River Valley, has $265,000 in his discretionary fund.

Supervisor Mike Maggard, whose district includes the valley portion of the river, has more than $419,000 in his fund.

Supervisors Couch and Zack Scrivner each have more than $204,000. Supervisor Leticia Perez has the least, with only $61,000 in her fund.

I know that some people might not want to see any Kern County dollars spent to keep SoCal people safe.

But these river rescues are done at our expense and it’s our responders who are put in danger.

The Kern County Sheriff’s Search and Rescue teams have gone out on an estimated 65 rescues this year (mostly since it warmed up).

The Bakersfield Fire Department has gone out on 31.

Though county’s Search and Rescue is manned mostly by volunteers — we're extremely lucky to have them — but there are still equipment and other personnel costs.

Because every single rescue is treated as an absolute life-or-death situation, meaning ambulances, fire engines and sometimes even a helicopter rush to the scene.

If a billboard or a Spanish-language radio blurb could keep one more family from losing a loved one, I’d say that’s money well spent.

Thank you, Clinica Sierra Vista, for recognizing that fact.

Now, could someone please pry open the county’s eyes?

Lost to the Kern River

Rita Bello, 34, of Bakersfield. In the river a half mile inside the canyon on March 6 (apparent suicide). Recovered April 7.

Larry Holquin, 60, of Bakersfield. In the river at Hart Park April 15. Recovered May 1.

Shane Ornelas, 44, of Buena Park (apparent heart attack). In the Tulare County portion of the river May 28. Recovered same day.

Juan Saquic Santiago, 43, of Sylmar. In the river at Keyesville west of Isabella Lake Dam May 28. Recovered May 29.

Karen George Mambreyan, 55, of Burbank. In the river at Keyesville June 3. Recovered June 13.

Michael Ramirez, 27, of Buena Park. In the river at Keyesville June 24. Recovered July 1.

Mando Kaphan, 26, of Hemet. In river at tequila chute on the upper Kern July 1. Recovered July 19.

Juan Torrez, 34, of Bakersfield. In river near Lake Ming June 3.

Henry Menjivar, 27, of Panorama City. In the river at Sandy Flat Campground July 22..

Brian Lopez, 21, of Bakersfield. In the river at Hart Park July 23.

There now are three people missing in the Kern River following more incidents over the weekend of people entering the dangerous waters, the Sh…

Lois, I fundamentally disagree with your approach to this problem. I spend time on the Kern River frequently. Like most people that enjoy the river, I implement common sense. I'm still alive. I'm also an experienced river runner although I haven't run the Kern River. When my wife and I moved to Bakersfield we saw the danger signs entering the canyon and we took them seriously. Flooding our public spaces with 'doomsday' signs is not the answer. The people that have died on the river are a small minority in comparison to the people that enjoy it responsibly. Remember, our society is founded on the principles of utilitarianism: maximizing the greatest good for the greatest number of people! On another note, please refrain from short paragraphs with run-on sentences. You should never start a paragraph with 'And'. It's hard to take your articles seriously because you're grammar is very poor. Perhaps a refresh of college English classes are in order?

There are far better ways to go about this than charging a fee. Ask KCSO SAR, some of their members - those volunteers in the orange shirts spending thousands of hours out there on that river doing those rescues and recoveries, for suggestions. They do have them. I am not in favor of a fee because it makes people hesitate to call for help, and when they do, they are in far greater danger than they already were, placing our volunteers at greater risk and being married to one of them, I am not in favor of greater risk imposed on the services he already provides the county for FREE.

Lois continues on in her efforts to save us all from ourselves. Somehow, she never understood the basic concept of liberty. You see, liberty has a cost to it. This cost is that you are responsible for your choices/actions. Lois, and her ilk, always demand to be able to make better choices for people than these people would make for themselves. These nanny state do-gooders want to take away your fireworks, regulate what your kid eats and bar you from entering any body of water that they find dangerous. They demand that you surrender this liberty....because they will make better choices than you. And they demand our civil servants help them rob you of your liberty....for your own good.

Lois....just go away. If people jump in the river and drown, then they exercised their liberty in an irresponsible way and paid the ultimate price for this. Go away Lois. Just leave people alone.

You're right. We should take down the fences around canals and on overpasses while were at it. Us responsible citizens know better than to jump off a bridge or scale a fence. In fact, why have traffic lights, you should always look both ways, why are you impeding my liberties? Freakin socialists!
The river is obviously more dangerous than it looks, the people from L.A. should automatically know that right? Its Darwinism because nobody has ever saved you from making a bad decision .......right? When sharks hit the beach, why are they closing the beach? Its so un-American to protect the ignorant. Let them take their chances.
Or..........quit whining about not being able to enforce it being illegal and handing out citations because of a lack of resources. Do we think one Ranger cruising the area is more expensive than twice a week rescues and body retrievals using a dozen search and rescue guys, a helicopter, and fire trucks? That's more cost effective, than stay out or get a ticket?
Personally when I'm trying to enjoy a round of golf at the river, I never want to again hear the gruesome screaming of family and friends as their loved one s swept off to their deaths........ignorant people or not. Sometimes yes, you have to save people from themselves. Its one thing to be personally responsible, its another when that personal responsibility extends to a drowned child.