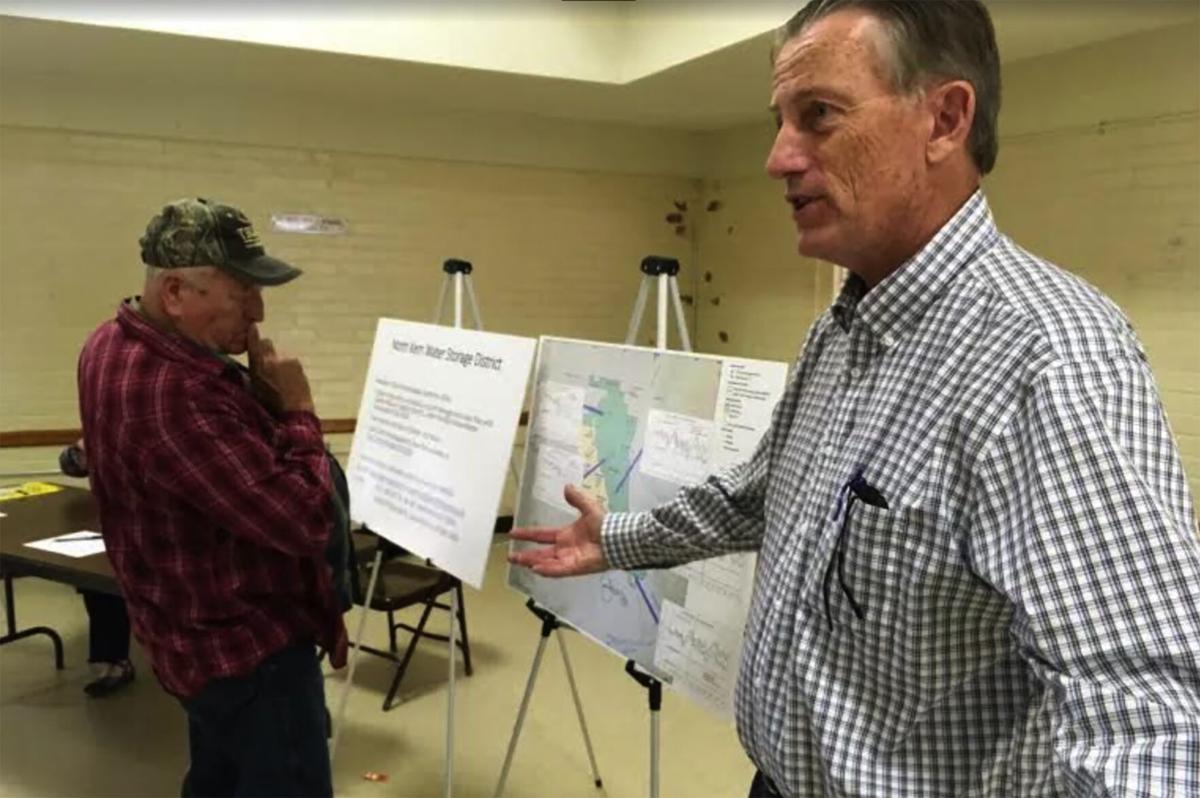 Shafter-Wasco Irrigation District General Manager Dana Munn gestures while explaining how the district will implement the Sustainable Groundwater Management Act during a 2019 meeting with area farmers.

Dana Munn, a fixture in the Kern County water world, has taken an early retirement from Shafter-Wasco Irrigation District due to medical issues, he announced Tuesday.

Though his retirement date hasn’t been set, it is considered imminent, according to the irrigation district.

Munn, 63, has also served in the crucial position of Kern River Watermaster since 2014. He was the river's third watermaster since the position was created in 1955 as a liaison to the Army Corps of Engineers, which operates the Lake Isabella Dam.

The Kern River Watermaster must have a deep knowledge of the intricate rights structure on the river and maintain a close watch on the watershed to work with the Corps to keep an adequate supply in the lake and aid in doling out appropriate amounts of water to each rights holder.

The position doesn't come with any authority, acting more as a representative of the Kern River rights holders who collectively pay Munn $27,500 for his time. "It is so interesting to me," Munn wrote in an email of why he does the job.

Munn has an encyclopedic knowledge of the river and an easy, unflappable disposition that has made him indispensable in often contentious and politically fraught river operations. Munn is also well known for his dry sense of humor and occasional pranks.

It's unclear if his retirement will include the Watermaster position.

Munn wrote in an email that he explained his medical condition to the Kern River parties and it's up to them how to proceed.

If he does step down as Water master, he will not be easy to replace, noted colleagues.

Munn was the head of North Kern Water Storage District when it sued Kern Delta Water District over the Kern River. Munn’s district argued Kern Delta should forfeit some of its water rights for lack of use. In 2007, a judge agreed. The State Water Resources Control Board recently announced it will hold a hearing to decide how much of that forfeited water may be available. A hearing date hasn’t been set.

“We fought over water rights for almost 20 years,” said Mark Mulkay, Water Resources Manager of Kern Delta. “I never agreed with Dana professionally but I always counted him as a friend.

“He was one of those guys you could argue with all day and then go out to dinner that night and talk about family, friends, sports, or any other topic and enjoy the evening. I will miss his calm demeanor.”

Munn grew up in a farming family in Tulare County and went on to become a civil engineer after earning his degree from U.C. Davis. He later obtained a master's degree in business administration from California State University, Bakersfield.

He began his career in Kern County with the engineering department in Tenneco West, which owned most of the Kern River until 1976 when its rights were purchased by the city of Bakersfield.

Munn was hired in 1990 at North Kern where he worked for the former Kern River Watermaster Chuck Williams. Munn stayed with North Kern for 23 years eventually taking over for Williams as engineer manager.

During his time there, Munn helped expand North Kern’s water recharge and recovery operations, improved its well fields and installed connections between the Beardsley and Friant-Kern canals to improve water movement.

He left in 2013 to take over as general manager at Shafter-Wasco Irrigation District where he, again, was instrumental in increasing the district’s water recharge and recovery operations.

In 2014, Munn was named Kern River Watermaster after Williams retired.