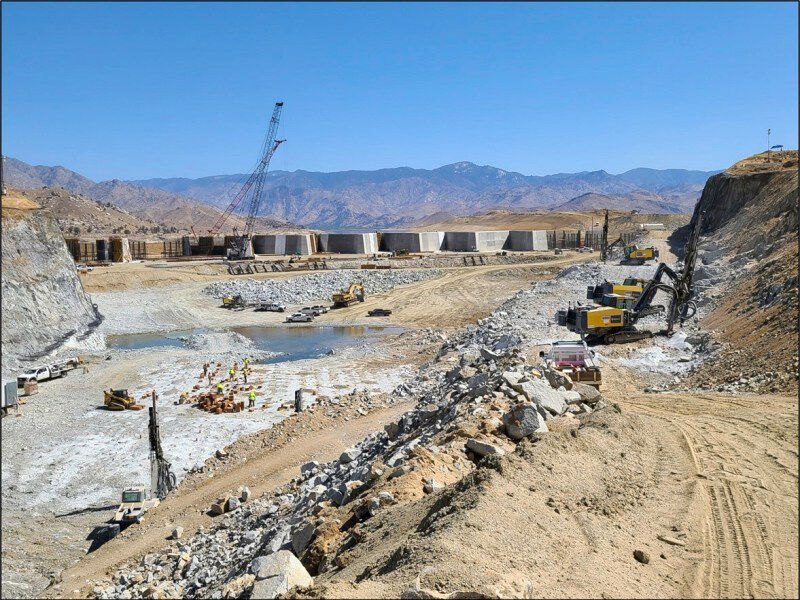 The emergency spillway chute looking upstream toward Isabella Lake with the labyrinth weir in the foreground. Construction is expected to be complete in 2022.

On schedule is probably the sweetest phrase a project manager can hear.

For projects that are the size and scope of repairs to the Isabella and Schafer dams, being on schedule is especially important.

“It’s been a long time coming and now we’re close to the finish line,” said Richard Brown, a spokesman for the Army Corps of Engineers, of the extensive repairs to Isabella Dam in Kern County.

Both projects have been “on the books” for years, Brown said.

“All these projects take years and years,” he said. “It’s harder to make repairs to existing dams than it is to build a whole new dam.”

Repairs to Isabella, which had seepage under the auxiliary dam and an active, but quiet, earthquake fault running beneath it, really got started in 2012 with actual construction getting underway just three or four years ago.

The main work on the auxiliary dam involved shoring up the downstream side to prevent erosion. On the main dam, the concern was overtopping from water sloshing around after a large jolt from an earthquake.

To prevent that, the Corps raised both dams by 16 feet. It also built a second emergency spillway with a “labyrinth weir” at its mouth. The existing spillway will still be in use as needed.

The labyrinth weir is a 30-foot tall, 1,100-foot wide concrete zigzag structure that water would flow over in a more controlled manner during extremely high water years.

The spillway is more than half done and the labyrinth weir about 40 percent done, Brown said.

The $650 million project is on budget and on track to be completed by next spring, he said.

Downstream water users won’t get any extra water from the dam repairs as they won’t increase the amount of water that can be held in the lake. But the repairs will allow the lake to be filled to its 568,000 acre foot-capacity again. It had been constrained to only 360,000 acre feet for safety concerns after the seepage and earthquake fault were discovered.

The repairs to the dam at Tulare County’s Lake Success, which was renamed in 2019 in honor of longtime Tule River watermaster Richard L. Shafer, aren’t as extensive as those to the Isabella Dam.

But they are as intricate in their own way. The first phase is nearly complete. The Corps had to realign Avenue 146, which ran essentially up the dam’s spillway.

Once that’s done, the Corps will start work on widening the spillway from about 100 to 260 feet and building a 10-foot tall “ogee weir” at the mouth of that spillway. An ogee weir is a concrete barrier with a rounded downstream face. Similar to the labyrinth weir, it provides a controlled out flow in high water years.

The Shafer Dam project will increase the amount of water held in Lake Success, from 82,300 acre feet to 110,300 acre feet. That extra 28,000 acre feet will be apportioned to water users based on existing rights.

The Corps also operates the Kaweah and Pine Flat lakes.

Editor's note: This story has been updated to correct the height of the labyrinth weir and the width of a spillway.