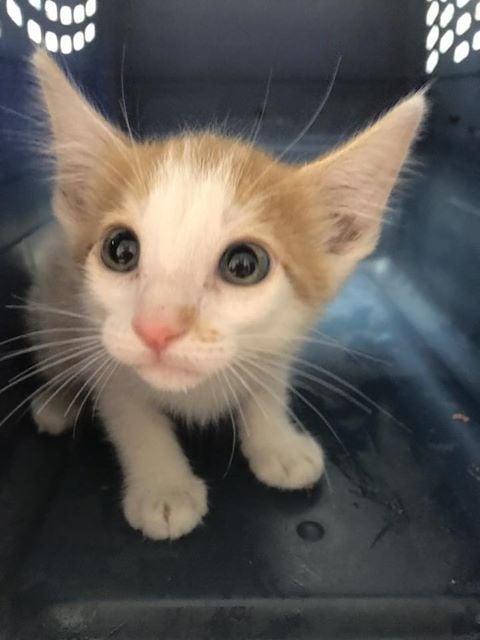 A kitten awaits adoption after being altered, vaccinated and microchipped. 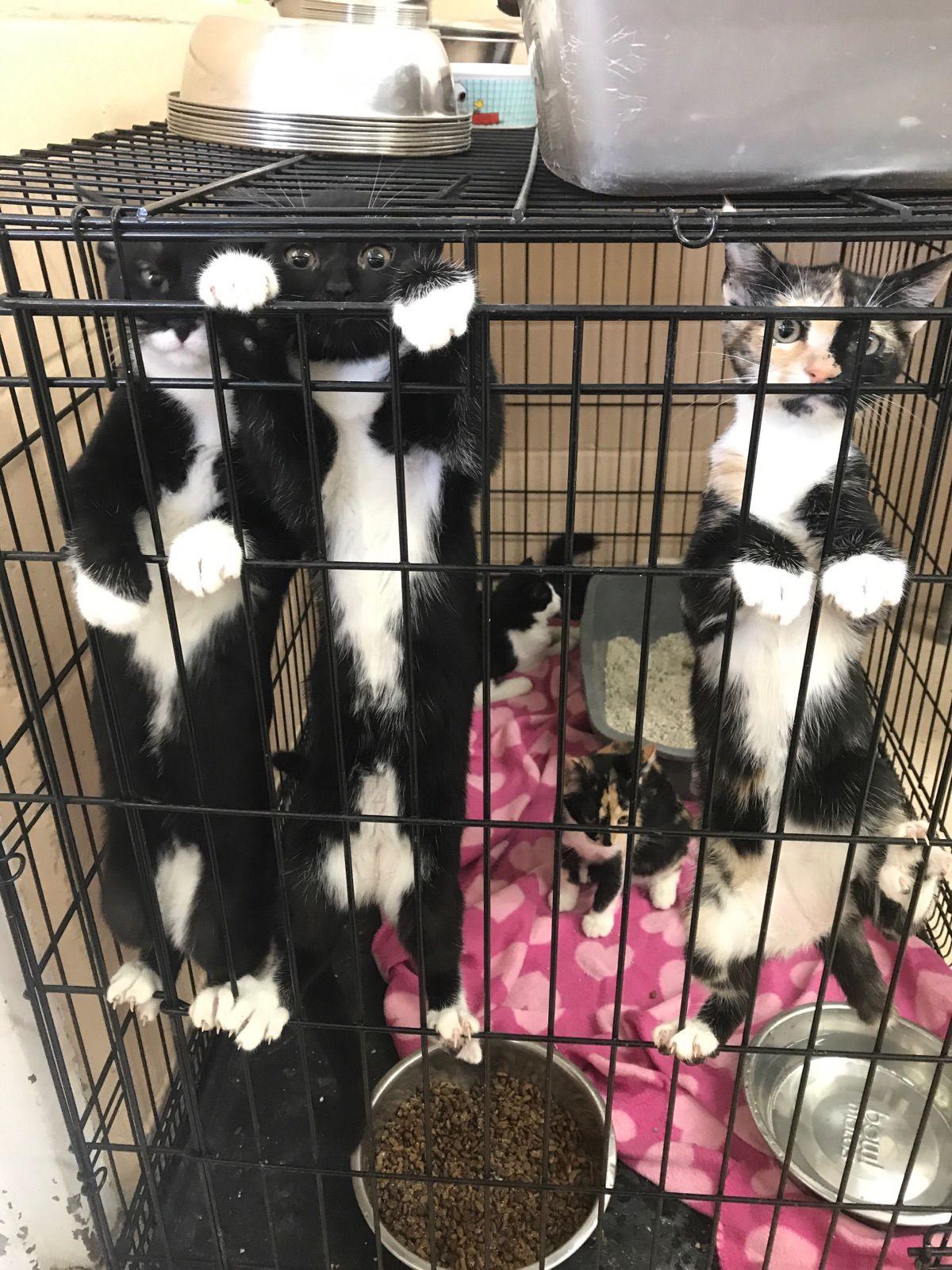 Kittens climb up their cage in the Bakersfield Animal Care Center. The shelter currently has a grant to fix feral and community cats to try and stem Bakersfield's huge cat overpopulation problem.

A kitten awaits adoption after being altered, vaccinated and microchipped.

Kittens climb up their cage in the Bakersfield Animal Care Center. The shelter currently has a grant to fix feral and community cats to try and stem Bakersfield's huge cat overpopulation problem.

Just a quick update on how Bakersfield’s new, free TNR effort is going.

In a word: GREAT!

The Bakersfield Animal Care Center got a $60,000 PetSmart Charities grant earlier this year to fix 833 feral or community cats and it’s already more than halfway done after only four months.

TNR (trap, neuter, release) has been in place for many years at other shelters and was started back in July 2013 by the Kern County Animal Services Department almost on a wing and a prayer.

But the city lacked funding until PetSmart Charities stepped in.

“We’re invited to apply for the same grant again next year and we absolutely plan to,” said Shelter Director Julie Johnson.

She said the public has been very excited to take advantage of the program while it lasts.

If you’re unfamiliar with TNR, it’s an attempt to reduce and stabilize feral and/or community cat populations. Bakersfield's stray cat population is estimated to be about 120,000.

Feral cats are considered totally wild, are unhandleable and avoid humans. Community cats can be handled, and tend to cruise the neighborhood getting fed here and there.

Either way, once they start reproducing unowned cats can create a major problem in a hurry.

Factoring in survival rates, the numbers can go as high as 49,000 cats/kittens produced by just one unspayed female over a 10-year period, according to the website calculate-this.com.

So far, the city has fixed a little more than 600 cats using the PetSmart Charities grant.

Which means a whole mess of unwanted kittens will never be born.

Which, in time, will mean a lot fewer unwanted cats and kittens coming into shelters only to be euthanized.

“Shelters don’t want to be in the extermination business,” Johnson said. “Our goal is to save lives, not end them unless there’s a threat to public health and safety.”

To that end, she said, she’s seen a significant reduction in cat intakes from July 2016 of 460 to 263 this past July. In fact, this July's cat intake was the lowest in four years.

A single year-over-year monthly statistic may not be proof of a TNR effect, but Johnson was hopeful the trend would continue.

Especially considering the county has been fixing an average 1,200 cats per year through its free TNR program since its first full year in 2014.

Including half of 2013, when it started, the county has fixed more than 6,000 feral and community cats.

That has to start making a difference at some point.

“Over the years, we have seen a reduction in ferals coming in and it’s been consistent,” said Kern County Shelter Director Nick Cullen.

It stands to reason that any large-scale, ongoing spay/neuter program will have an effect as long as people use it consistently for their animals.

So, good for the city and county.

Now, to those people — and you know who you are — who write me nasty grams about how releasing cats back into the community is an affront against wildlife, save it.

They also keep the rodent population in check, which is mighty helpful in tamping down pesky little things like bubonic plague and hantavirus.

And I don’t know how it escapes the anti-TNR crowd, but TNR reduces the cat population. REPEAT: Fewer cats.

I’m not sure what the anti-TNR people want — for us to round up and kill every stray cat in the county? Build a giant indoor cat-o-rama to hold them all?

Anyhoo, since I live in the real world, I like reasonable, doable solutions.

And TNR is exactly that.

If you are a city resident and want to get a feral or community cat (not wild but not “owned”) fixed through the Bakersfield Animal Care Center TNR program, here’s what you do.

Call Critters Without Litters, 831-6000, to make an appointment first.

Do not trap the cat first!

When you make the appointment, tell them you are a city resident (you will be asked for proof of address) and you want to qualify for the city’s PetSmart Charities grant.

Once you get an appointment, you can rent a trap from Critters or buy one at most feed stores.

Then set out the trap no more than one day (depending on the heat) before the appointment.

Take the cat to Critters to be fixed.

You must agree to return the cat to its original neighborhood.

You must be a resident of an unincorporated area and provide proof of address.

Make an appointment with the shelter by calling 868-6999 or emailing animalservices@co.kern.ca.us before trapping the cat. This ensures the shelter has room to house the cat until it can take the animal to Critters to be fixed.

Kern Humane Society gives out spay/neuter vouchers on the first Saturday of every month from 10 a.m. to 3 p.m. at its thrift store at 2111 Brundage Lane.

Vouchers for feral cats are $25.

No appointment is needed.

The Bakersfield Animal Care Center will participate in the national "Clear the Shelters" event on Saturday, Aug. 19.

The shelter is hoping to adopt out 100 animals that day, said Director Julie Johnson.

Adoption fees will be waived that day.

And the shelter will have face painting for kids, barbecued food, lots of pet-oriented vendors and more.

Go to the shelter's Facebook site for more information: https://www.facebook.com/City-of-Bakersfield-Animal-Care-Center-571134562986140/

They're not native here they killed too many things for the sport of it all this wasted time effort money trapping and neutering and releasing you're crazy. I'll never trap a cat and see it in my backyard again. All that time and effort to help along and nothing but killer? Isn't there a program called plug and plant sign me up.

All that wasted time and effort trapping and then the neutering and then whoever is going to drive them back to where they came from that's not stopping it that's prolonging that's stretching it out this lingering stopping it means Plug and Plant program. I'm done with it fed up with them. to trap one and see it again in the backyard now that will never happen. All that free roam ? Free they're spirit.how many more years after they're neutered and turned back loose are they going to live and continue to make things smell like cute kitties kill little animals for the jolly good sport of it. plug and plant program.

Thank you for this article, and for creating awareness around this issue. Yes, there are a lot of street cats out there and a grant for 800 spay/neuters may not create a dent. However, I make sure all the street cats on my block are trapped are fixed, and I spay/neuter all my own pets. Blaming animal control or the feeders is not the solution. Euthanizing the cats by the thousands every year has not helped. Animal control did not create the problem, the community created this problem. People can either make the decision to complain or they can make a difference.

Except that TNR is not a solution. And neutering a few thousand cats out of an estimated 120,000 cats won't even slow the growth, let alone stop it or reverse it. Talk to an actual scientist about population dynamics. He can confirm what I'm about to tell you. Based on the known reproduction rates of cats, in order to stabilize the population and keep it from growing, you need to neuter approximately 75% of the cats in a single year. That's 90,000 cats. It isn't a situation where "every little bit helps". If you don't at least hit that 75% mark it makes no difference whatsoever. The breeding of the remaining intact cats will far outstrip those lost to trauma and disease. It's a complete waste of time, effort, and money. It's time for animal control to step up and do their job. Require pet cats (the original source of all feral cats) to be spay/neutered, licensed, contained to owner's property, micro-chipped and collar tagged. Ban feeding of feral cats and heavily fine violators. Start removing the largest cat colonies. Adopt out the ones you can. Euthanize the rest.

So who are the people that are going to remove and euthanize all the large colonies? Are you going to do it??? Who's going to pay for it??? You may have a science friend to quote, but I know a lot of intelligent people who could not find their way out of a wet paper sack with instructions included...haha You make a lot of good points, but funding is not easy to come by for fixing or killing them so good luck with that. Have your science friend work out a budget for trapping, killing and re-homing the thousands of "adoptable" because it would be in the millions of dollars range. 120,000 feral cat population is a very, very low estimate for Kern county.