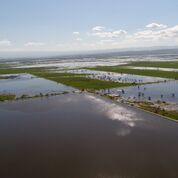 Aerial shot of the Kern Water Bank, which has 11 square miles of recharge ponds, full of mostly Kern River water.

The good news is that not a drop of Kern River water is going into the California Aqueduct to fill Southern California taps.

But water managers are keeping an eagle eye on the snowpack and the weather hoping there are no sudden moves from either in the near future.

A warm rain or rapid run-up in temps could bring a huge slug of water down and overwhelm ongoing efforts to squirrel it away, said Kern River Watermaster Dana Munn.

“It’s amazing,” he said. “It’s such a big water year and we’ve managed to push water into all these places.”

During the last big water year, 2010-2011, a lot of recharge ponds hadn’t been built or weren’t operating at full capacity.

So this year is a bit of a mystery to Munn, an engineer who likes lots of data to run models and make predictions.

But so far, so good.

“We’ve had to shove aside water from the state and the Friant-Kern Canal in order to make room for the Kern River water, but so far, we’re absorbing it all locally.”

This will get trickier as it warms up.

That’s because the Army Corps of Engineers needs to keep the outflow from Isabella Lake high enough to keep the inflow from bringing the lake level up to 360,000 acre feet.

But the Corps deemed 360,000 the top level for safety reasons. (That's a whole other story on why the Corps hasn't corrected these problems in more than a decade.)

Munn said the plan is to get it below 200,000 acre feet by the beginning of April to “punch a hole to make room for the snowmelt” now at 260 percent of normal with more storms on the horizon.

Which is why I said no Kern River water is going into the aqueduct yet.

That’s just a boatload of water coming our way.

Local water districts have really pulled together in anticipation of that deluge.

Some have even refused delivery of their state and federal allotments.

Kudos to the Kern Water Bank for doing exactly that and using its vast acreage to soak up a ton of river water.

KWB is the largest groundwater bank in California with 11 square miles of ponds to fill.

It switched over to river water at the beginning of February and has so far socked away a total of 102,000 acre feet.

Considering it can take 60,000 acre feet a month, that means the bulk of that water is from the Kern River.

Estimates are that the bank can recharge up to 500,000 acre feet, so the river will have a steady taker for at least a while.

Parker said the river water is cheaper than state water with Bakersfield selling at $5 an acre foot and Buena Vista Water Storage District selling at $10. (Hmm. The last time I wrote about Buena Vista selling water it was for an average $1,135 an acre foot in March of 2014 during the drought. How times do change.)

Some may quibble with the KWB taking so much river water because a single private individual, Stewart Resnick, controls 51 percent of the bank, and its water.

I say that’s better than Kern River water sloshing down the aqueduct to flush toilets in Southern California.

And I think it’s great that so many water districts are working together to keep the river from straying out of county.

Welllllll…..there is one local district that wouldn’t be completely unhappy if at least a little river water found its way into the aqueduct.

The Rosedale-Rio Bravo Water storage district has a case pending before the State Water Resources Control Board to officially claim some of that flood water as its own, which would make it a Kern River rights holder.

Hey, it’s water, you had to know there’d be a twist.

This weekend the water level in Isabella Lake is expected to reach — and maybe even exceed — the restricted pool allowed by the U.S. Army Corp…