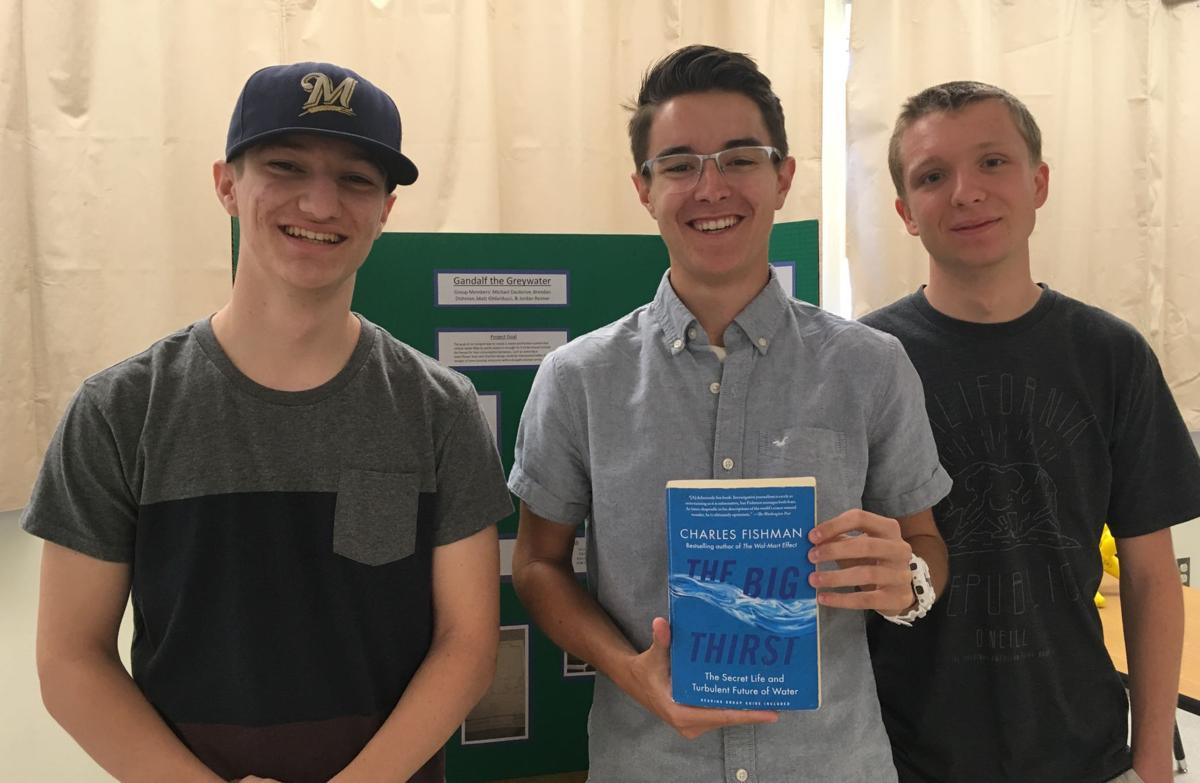 Michael Dauterive, Brendan Dishman and Jordan Reimer, Centennial High School students, stand with a copy of "The Big Thirst," which inspired them to develop a greywater reclamation project that they named "Gandalf the Greywater." Matthew Ghilarducci, not pictured, was the fourth member of their team.

When a friend asked if I’d like to meet a group of teenage boys who A) had read “The Big Thirst” and B) were inspired to engineer a water reclamation process because of what they’d read, you KNOW what my answer was.

I was honored on Tuesday to meet Michael Dauterive, Brendan Dishman and Jordan Reimer, all 17-year-old Centennial High School students.

Unfortunately, the fourth man on their team, Matthew Ghilarducci, was taking his AP calculus test and couldn’t meet. (I can barely spell calculus!)

The four are all seniors in Colin Smith’s “Engineering Design and Development” class.

It’s more of a program than a class, actually, with the first three years introducing students to engineering concepts then elevating to the fourth year where students create their own projects.

“At the beginning of the year, they choose a problem to solve,” Smith explained. “Then they do the research to see what other people have come up with and eventually come up with their own solution.”

This team decided, after reading The Big Thirst, to find a way to clean up and reuse “grey” water.

We’re not talking about toilet water.

And it’s a lot of water.

In fact it’s about 64 percent of all indoor water use, according to the Water Research Foundation.

“We thought, if we could figure out a way to save 30 percent of that, it would be a lot of water that could be used for landscaping,” Dishman said.

Because landscaping is where the majority of total household water goes.

Think about that — we water our lawns with drinking water quality water. Silly.

So, yeah, why not reuse dish water?

Well, you can’t have people rolling around on lawns sprinkled with potentially icky water (who knows what another person does in the shower, just sayin'.)

So, the water has to be cleaned up at least a little.

The teens initially thought about using ultraviolet lights, which do clean up water.

“But they only impact water on the surface plus the maintenance would be too much,” Dauterive explained.

In The Big Thirst, the teens had read about Salisbury, Australia, which was on the verge of being fined for dumping untreated stormwater directly into the ocean.

“They created an artificial wetlands,” Reimer said. “And the aquatic plants purified the water enough to use on landscaping.”

The boys decided to scale that down so it could be adapted to individual homes, or possibly apartments. Mostly new construction since re-plumbing existing homes for greywater use is prohibitively expense.

Anyhow, mangrove trees wouldn't work on a small scale, but water lilies would.

They devised a system where greywater could be piped to a holding tank filled with water lilies — which could double as an “aesthetically pleasing landscape element,” according to Dauterive — then put through underground perforated piping and drip irrigation to water shrubs and lawns.

I like how they also figured out a water-saving idea for outdoor watering as part of their plan.

OK, their theory is nice but Smith’s class requires results.

Ghilarducci filled a large fish tank with grey water, added the lilies and they tested the water for nephelometric turbidity units (NTUs), which are nonconsumable materials.

“The results showed the lilies were effective,” Reimer said. But it wasn’t completely straightforward with NTUs spiking and dropping back down.

“We’ve only been able to test it once,” Dauterive explained.

Even their very small scale testing cost the young men $134, a small fortune for high schoolers.

“And, well, I don’t have a job so we’re kind of limited on cash,” Dauterive said.

Like true engineers, though, they all mentioned “more testing” as the next most imperative step.

I contacted Charles Fishman, author of The Big Thirst, and he was excited the teens had really taken to heart the message in his book.

“I love that they made the connection that, ‘Hey, people in Australia are doing this, why not us?’”

Because, as he points out in the book, all water problems are extremely localized and people have to figure out the right fix for each area, one that will be practical and sustainable.

“It sounds like these kids really picked up on that,” he said. “And that’s hugely valuable to them and whatever community they land in.

"They will have an appreciation for water issues and know they have the ability to fix them, because they did it when they were 17 years old.

“They’ve figured out that water isn’t magic. They just need to ask enough questions. They don’t need a wizard.”

Perhaps not, but just in case, they did name their project “Gandalf the Greywater.”