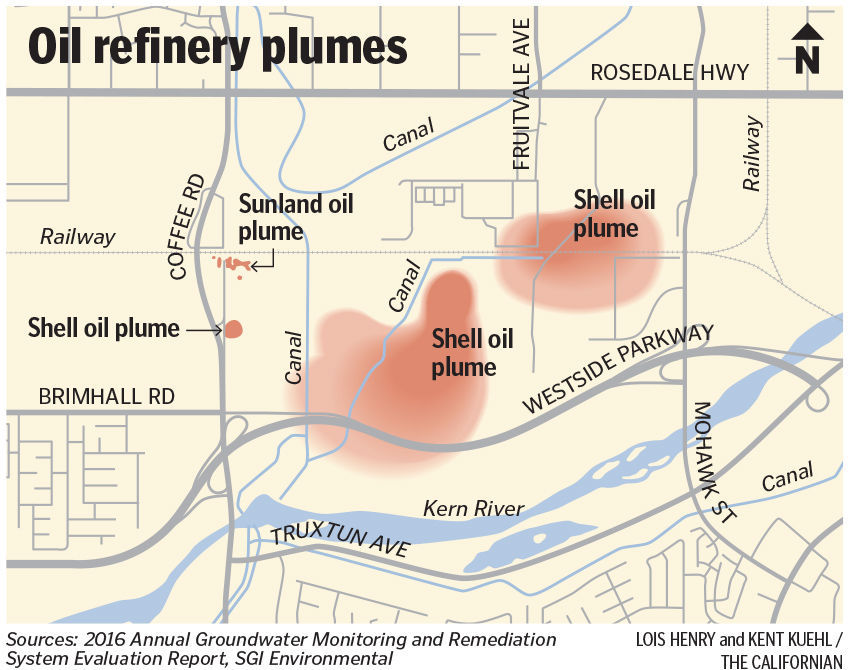 The good news is that more than 40 million pounds of petroleum hydrocarbons have been sucked — literally — out of the ground around the former Shell Oil (now Alon) refinery on Rosedale Highway.

And the really good news is that toxic plume, which had been creeping toward the Kern River bed and several drinking-water wells, was stopped, largely due to the drought, so the crud is contained.

In fact, the plume is shrinking. So, yay drought!

The bad news is there’s really no telling how much work remains before the site is “clean,” according to Doug Patteson, a supervising water resource control engineer for the Central Valley Regional Water Resources Control Board.

“There were three separate refineries there over about 100 years so there’s no telling how much stuff leaked out and how much is still there,” he said. “It’s safe to say the cleanup will continue for years, if not tens of years.”

Well, that’s kind of a bummer.

I had thought that since it had been 10 years since we last wrote about the hydrocarbon plumes (Sunland Refinery on Coffee Road has a much smaller one as well) that it would all be shipshape by now.

But, at least Shell isn’t dragging its feet any longer as The Californian discovered back in 2007.

Back then, we learned the Regional Water Quality Control Board had been playing letter tag with Shell for the better part of 10 years while remediation efforts stalled.

This wasn’t an innocuous splat of baby oil.

It was a 300-acre plume of highly volatile gasoline, diesel and some crude oil that had leaked onto the ground for so long it had reached depths of 200 feet in some places.

And, as I said, it was moving toward the Kern River bed, Bakersfield’s main recharge channel for the groundwater that we all rely on to live.

Even so, the state didn’t issue a formal enforcement order until the plume began migrating off refinery property in the late 1990s.

Then the back-and-forth letters began, but not much serious cleanup.

In 2012, the state issued another formal enforcement action, which was settled in 2013.

Shell promised to clean up the plume plus pay a fine of $250,000 and, for good measure, restore habitat on the Panorama Vista Preserve.

Ever since that settlement order, Patteson said Shell has been doing the work and reporting back to the board regularly.

“Cleanup has definitely increased in the last 10 years,” he said.

The contaminants are being removed using soil vapor extraction where the liquid contamination is vacuumed up as a gas.

When the water table is higher, “air sparging” has to be used in which air is forced into the water.

Hydrocarbons attach to the bubbles, which rise into the soil where they can be sucked out.

As the water table dropped during the drought, that required less air sparging, which streamlined the process and allowed the soil vapor extraction to go deeper.

Both the Shell and Sunland plumes are now contained to those properties, he added.

In the course of all this monitoring, MTBE, a now obsolete gasoline oxygenate, was found in a nearby private drinking well, which was shut down and Shell has been ordered to investigate the source, Patteson said.

Back in the early 2000s, MTBE was found in several wells serving nearby businesses and properties.

Shell shut in those wells and paid to have the properties hooked up to Bakersfield’s water system.

Small aside: MTBE was an epic failure by the California Air Resources Board, or CARB, which mandated it be added to gasoline to reduce air pollution.

CARB bureaucrats didn’t bother to go beyond the octane information about MTBE or they would have also learned it is highly volatile, water soluble and long-lasting, making it a hugely expensive and rascally contaminant to try to control.

It was banned in California in 2004 but, as we see, its effects have lingered.

Anyhow, back to the plumes.

Patteson said the World Oil plume, which was much smaller at only 25 acres, will likely be cleaned up in a much shorter amount of time. Though he declined to put a time stamp on it.

And the definition of “clean” could depend on how those properties will be used in the future.

A housing development requires a much higher standard of clean than, say, another refinery.

We’ll try to have an update before another 10 years goes by.

Contact Californian columnist Lois Henry at 395-7373 or lhenry@bakersfield.com. Her work appears on Sundays and Wednesdays; the views expressed are her own.

Anyone interested in checking out groundwater contamination and cleanup efforts can follow along on the Central Valley Regional Water Quality Control Board’s website using its “GeoTracker” function here: https://geotracker.waterboards.ca.gov.

Projects are tracked by address, so if you at least know the street name where contamination was found, just type it in the search bar.