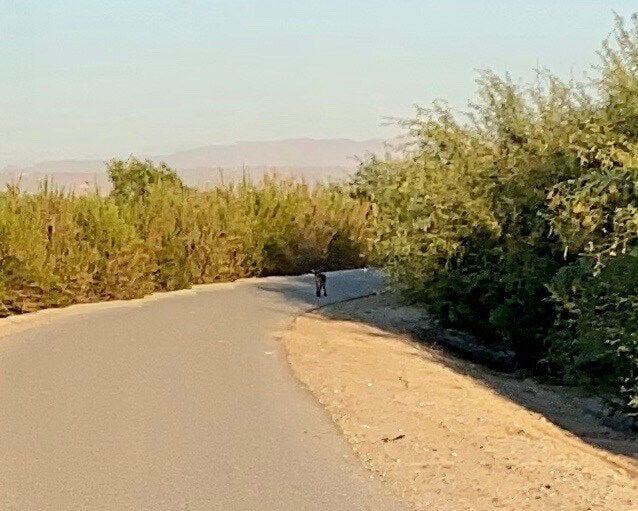 What looks like a young mountain lion strolls down the Kern River Parkway early Tuesday morning about a mile east of Enos Lane.

Retired Shafter farmer David Bell snapped a photo of what appears to be a young mountain lion as Bell was biking on the Kern River Parkway early Tuesday morning.

Bell was about a mile east of Enos Lane when he saw what he thought might be a dog. As he got closer, he said, he realized it was a mountain lion.

“I got pretty close to it and it went off the side of the path into the willows,” Bell said. “I passed by and turned back and saw he’d come back out onto the path and that’s when I got the picture.”

Over the years, there have been numerous reports of mountain lion sightings on or near the parkway, said Dianne Hoover, director of Bakersfield’s Recreation and Parks Department.

Most turn out to be bobcats or other animals.

Hoover said she only knew of one sighting in the past 15 years that was confirmed to be a mountain lion.

Bell’s photo, though, certainly looked like the real thing to Hoover.

She said neither Bakersfield nor Kern County animal control departments handle wild animals; that’s up to the California Department of Fish and Wildlife.

“Mountain lions usually live up in the mountains and only come down in search of food, typically in really dry years,” Hoover said. “If this one is just transient, I wouldn’t worry about it.”

Still, she cautioned, people should follow common sense when dealing with any wild animal:

● Do not feed it or leave food out for it.

● Do not try to approach it.

● Keep small children and pets away.

● If possible, jog, walk or bike with a partner.

● If confronted by a mountain lion, wave your arms and yell to make yourself look bigger, throw rocks.

Bell, who bikes on the parkway regularly, said he’s seen lots of wildlife in the area, including a wide variety of birds, several lynxes and even beavers near the McClung Weir west of Allen Road.

Beavers have had a rocky relationship in Bakersfield since 2007 when they destroyed several trees. The most recent issue was in 2017 when they chewed down a tree along Mill Creek near 24th Street and Golden State Avenue.

“As long as they stay away from the trees at River Walk Park,” Hoover laughed when told of the latest beaver sighting.