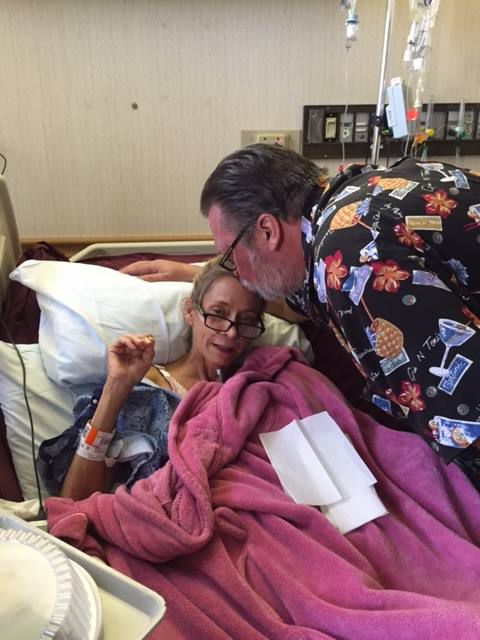 Jaz and Laura McKay in early July. Laura was diagnosed with liver failure in February while she also suffered a broken back. The McKays have been dealing with the difficulties of getting Laura on a transplant list for months. 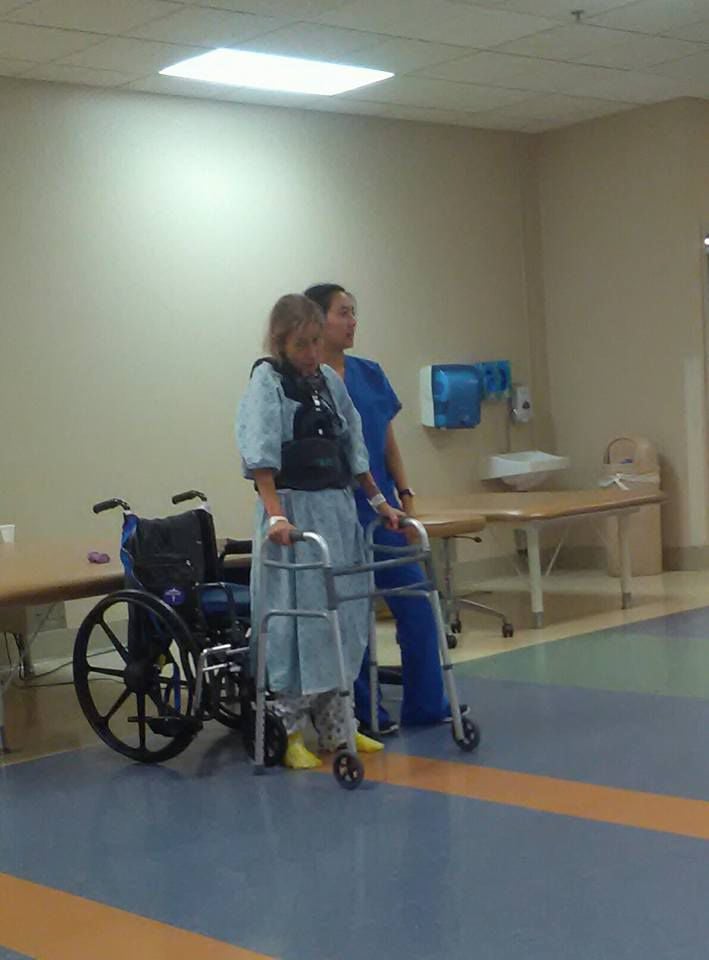 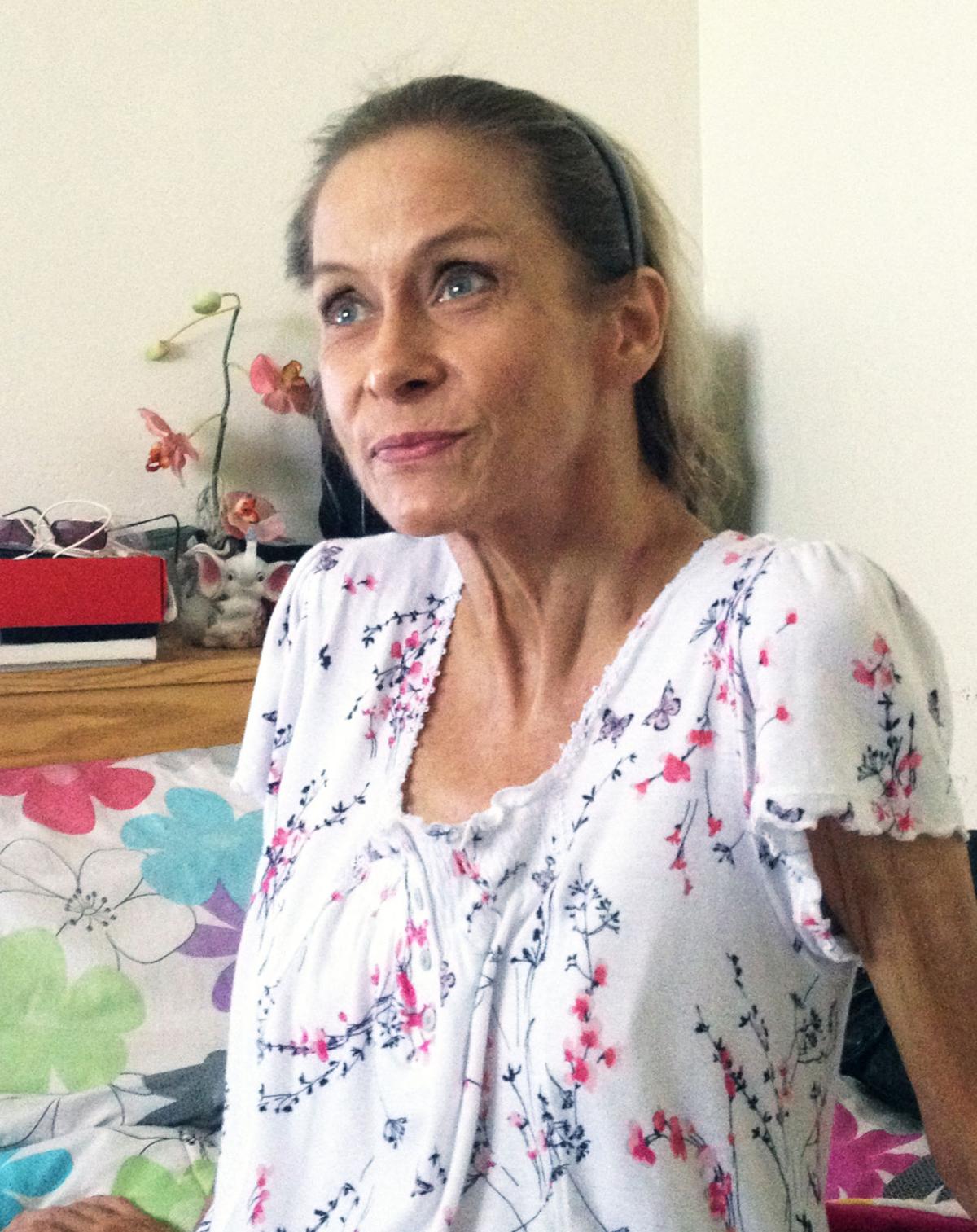 Laura McKay talks about her health issues and the difficulties of working through California's liver transplant rules in mid-August.

Jaz and Laura McKay in early July. Laura was diagnosed with liver failure in February while she also suffered a broken back. The McKays have been dealing with the difficulties of getting Laura on a transplant list for months.

Laura McKay talks about her health issues and the difficulties of working through California's liver transplant rules in mid-August.

When Laura McKay was diagnosed earlier this year with end-stage liver disease and told she had one, maybe two, years tops, that was bad enough.

Then she went down the bleak and confusing rabbit hole that is the liver transplant world only to arrive at what appears to be a dead end.

Not because she’s too old, horribly unhealthy or an inveterate alcoholic.

She lives in California.

And here in the Golden State, getting a liver is apparently harder than winning the Super Lotto.

Too much demand, too little supply.

Hence, the rules for who can qualify are stacked against Laura, who’s married to local conservative radio host Jaz McKay.

It’s all about the MELD score.

MELD stands for Model for End-Stage Liver Disease and is a numerical ranking that goes from six (less sick) to 40 (gravely ill).

In California, a person’s MELD has to be in the red, so to speak, to get priority on the transplant waiting list.

"My MELD is 35," Laura told me recently. "That's more than high enough to get a transplant in other states.

“But here, you have to be practically dead.”

This isn’t a new problem.

For years, Californians who could afford it have moved to other, more liver plentiful, states where MELD scores that qualify for livers are often in the 20s.

Apple founder Steve Jobs did exactly that in 2009 for his liver transplant in Memphis.

United Network for Organ Sharing (UNOS), the organization that regulates how organs are doled out around the country, has been working to try and smooth the uneven MELD issues.

In fact, UNOS put out a new proposal earlier this month that would reduce and reconfigure the country’s transplant regions so that areas of higher demand are paired with areas of higher supply. The group is taking public feedback on the proposal through at least Oct. 15.

But changes may not come soon enough for Laura.

Her odyssey began late last year when her feet began to swell.

Doctors told her it was nothing and sent her home.

“I could barely put my feet into oversized bedroom slippers,” she said.

Then in January, her belly began to swell and she wondered about liver disease. Laura has been on Medi-Cal since she was diagnosed with Lupus in 1996.

It wasn’t until February, when she had a bowel blockage that required hospitalization, that she got the official word — cirrhosis of the liver.

Cirrhosis just means scarring and it can be caused or exacerbated by a lot of things, according to Dr. Robin Matuk, Laura’s gastroenterologist, who works with patients both pre- and post-transplant. He couldn’t talk about Laura’s case specifically, but discussed liver disease and transplant issues in general.

“It’s not just alcohol or hepatitis C that can cause cirrhosis,” he said. “Lupus can cause liver disease as well. And obesity.

“In fact, obesity is the next big group coming down the pike (for liver disease).”

Even after Laura was properly diagnosed, she was sent home to deal with the disease as best she could.

It didn’t help that at the same time, she re-injured her back, which was broken in an auto accident when she was 17.

Still, the couple muddled along, sorting through insurance issues and figuring out next steps.

Then the floor fell out from under the McKays.

“I came home and found her in tears,” Jaz said, his gravelly voice breaking at the recollection. “She asked me, ‘What does canceled mean?’”

After the cirrhosis diagnosis, Jaz had been told if Laura ever got confused, get her to the ER immediately.

Confusion in a liver patient means ammonia is building up in the brain and can be lethal.

From that point, Laura was in hospitals from Bakersfield to UCLA through June.

At the end of July, Jaz was able to move her into a long-term care facility here in Bakersfield.

She’s been gaining back some weight and is able to walk a little.

“The first time I sat up and put my feet on the floor, I wept tears of joy,” she said. “You don’t realize how special that is until you can’t do it.”

Initially, the McKays were told Laura was a good transplant candidate.

But with the toll her back problems have taken, along with severe weight loss from a bout with pneumonia in the hospital and, of course, California’s obstinate MELD requirements, doctors ultimately told her she wouldn’t even make it on a transplant list.

“I got three different phone calls letting me know,” she said. “I’m still on the candidate list as far as I know.”

On the bright side, Laura’s more serious liver problems have abated somewhat.

She’s no longer jaundiced or swollen, indicating that her liver may be functioning slightly better than when she first went into the hospital.

Though Laura isn’t currently suffering the symptoms of a decompensating liver right now (swollen belly, etc.), that’s not to say her liver is on the mend.

“The only way to detox a liver is to not insult it,” explained Dr. Matuk.

That’s doctor talk for: Once it’s broken it can’t be fixed.

“If someone has cirrhosis and a MELD score of 35, it’s unlikely they will get better,” he said. “That’s pushing for a transplant and in other regions, that person would be transplanted.”

Which brings us back to how liver transplants work, or don’t.

Right now the country is carved into 11 transplant regions.

“The problem is, it’s really lopsided,” explained Mariel Carr, who runs a pro bono service helping families navigate the transplant system. “There are an incredible amount of very sick people in the California region.”

But not enough supply.

While other regions, such as the Pacific Northwest, have more donors and fewer transplant recipients.

UNOS has proposed to reduce the number of regions to 8 and expand their territories.

In California’s case, that would theoretically give us a larger donor pool.

But keeping California whole, as this UNOS proposal does, may not be the best solution, Carr said.

If the state were split up and each piece put into regions with higher donor pools, that might be better.

Carr became immersed in the system after her husband waited five years for a new liver, which he got in 2012. They live in North Carolina, which has a higher number of donors so MELD scores don’t have to be at the “death’s door” level to get a transplant.

“Even here, where the MELD scores don’t have to be as high, we wanted to increase our odds so we added our names to several hospitals, which we could do because they were in close proximity,” Carr said. “I thought, ‘Why doesn’t everybody do that?’”

She agreed the odds are stacked against the McKays and it doesn’t necessarily have to be that way, Carr said.

There are about 14,600 people nationwide on liver transplant lists.

About 7,100 transplants were done in 2015 (nearly 2,800 of those in California), which may seem like an insurmountable difference.

So, our supply and demand may be closer than those numbers make it appear. It’s just a matter of helping the supply get to the demand. (That and encouraging more people to become donors.)

Even if everyone agreed to the UNOS proposal, it could take several years for changes to be implemented.

Which, as I said, could be too late for Laura.

For now, the McKays are focusing on what Laura can do, not what she can’t.

She’s in physical therapy and her back is improving day by day.

Goal No.1 is to move her back home, with in-home care, sometime in the near future.

Goal No. 2 is for them to attend a Van Morrison concert with friends at the Hollywood Bowl in October.

Van Morrison is Laura’s favorite artist and one of Jaz’s friends bought tickets and has offered to rent a wheelchair-accessible van for the evening.

Opinions expressed in this column are those of Lois Henry. Her column runs Wednesdays and Sundays. Comment at http://www.bakersfield.com, call her at 395-7373 or email lhenry@bakersfield.com.

For tough-talking radio host Jaz McKay, his wife Laura’s condition has also been one of the most humbling experiences of his life.

“The people in this town are amazing,” he said.

He has kept listeners abreast of Laura’s illness since she was first hospitalized in February, but doesn’t talk about it every day.

“And people still call the show, or stop me in the street, just to tell me they’re praying for her,” he said. “People have little fundraisers for her all over. A guy was selling Trump posters at Bear Mountain Sports for $5 a piece and made $150 and gave it to Laura.”

A listener gave Laura a brand new iPad when Jaz asked for advice on what to look for in a laptop.

“I’m just a guy on the radio who talks for a living and these people treat me like family. Like FAMILY. I can’t say how much I love them for it.”

When a listener started a gofundme site for Laura, Jaz admitted he was embarrassed.

He noted the median income in Bakersfield is about $48,000 a year.

“I don’t make nearly that much.”

That’s OK, Laura explained. They aren’t the kind of people who need extravagances.

Even when Jaz bought her a pair of Skechers recently as she’s been able to move around and needs stable, easy on-off shoes, she thought it was more than they should spend.

“Those are too rich for our blood,” she said.

As with anything that’s opened up to the public, though, there have been haters.

One guy berated Jaz on his show for going on the air and joking around, accusing him of faking Laura’s illness.

Jaz was stunned but his listeners immediately came to his defense.

“Even my liberal listeners were furious with the guy,” he chuckled.