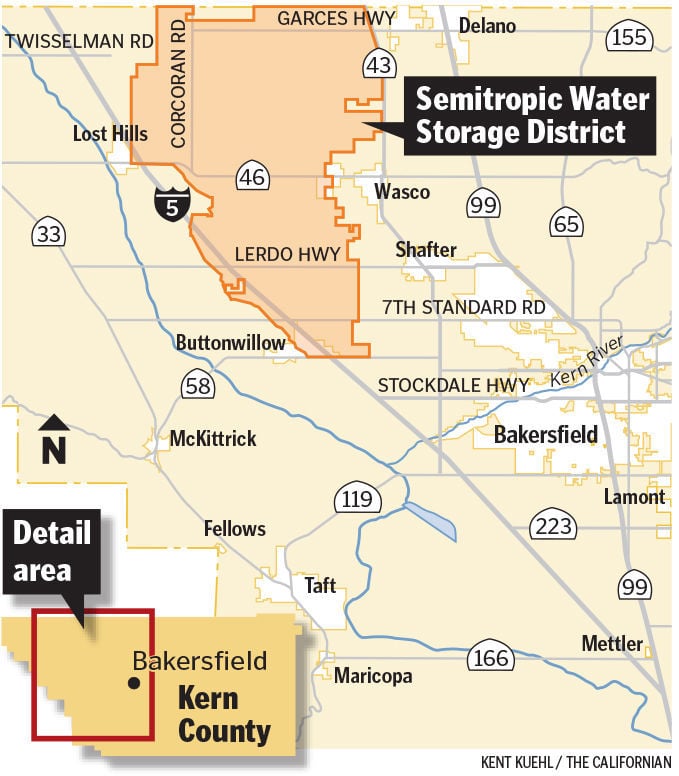 Fixing our groundwater deficit will be painful.

No way around it.

And growers in the massive Semitropic Water Storage District are learning that sooner than most.

Though the state has set a series of short- and long-term deadlines to restore the depleted water table, Semitropic is so far in the hole it got special legislation passed in September allowing it to ramp up its own timeline — and landowner fees.

It’s holding a vote on Wednesday to slap a $500-per-acre surcharge on any “new” ground developed for farming and is proposing to use satellite imagery to determine exact water consumption by crop.

If those crops use more water than is considered average, growers will have to pay an extra $90 per acre-foot, on top of land assessments and water charges they’re already paying.

Some farmers are saying it’s just too much.

“The water’s going to get so high, it won’t be worth it to farm,” said longtime farmer Peter Andreotti.

But the district insists it’s the only way forward under new groundwater laws.

GETTING OUT OF WHACK

Almost as soon as the state passed the Sustainable Groundwater Management Act, or SGMA, in 2014 mandating overdrafted aquifers get into balance, Semitropic got busy on the plan that will come to a vote Wednesday.

It’s no secret how upside down Semitropic is on groundwater.

A lot of factors have paved the road to Semitropic’s groundwater woes.

Part of the problem is that Semitropic is just flat huge, sprawling over 220,000 acres from south of Shafter to the Kings and Tulare county lines.

It never contracted for enough State Water Project, or SWP, water to farm every one of those acres.

Then SWP water was cut due to endangered species issues in the Sacramento-San Joaquin Delta.

When the price of almonds went through the roof, Semitropic suddenly had everyone and their brother, including investment firms, gobbling up district land without contracts for surface supplies.

It was just “plant and pump.”

The problem wasn't ignored by Semitropic, which has been aggressive, if not always successful, in looking for new ways to bring in more water.

One of Semitropic’s longest-running efforts, though, hasn’t been as effective as hoped.

Semitropic was an early adopter of banking water for outside entities, including the often-despised Southern California water gorilla, the Metropolitan Water District, or MWD.

It seemed like a good deal with MWD paying fees to park its water and leaving 10 percent of its banked supplies.

Then MWD water — and its storage fees — bypassed Semitropic in the California Aqueduct when delta supplies tightened.

And that 10 percent “leaveback water” (or "magic water" as one farmer called it) wasn’t a match for the massive pumping going on in the district.

But it was still behind, spurring it to look for water in what some have seen as questionable places.

Decades ago, Semitropic joined an effort with the Delta Wetlands Project in which several privately held delta islands would be flooded and that stored water later banked in Semitropic.

The plan successfully emerged from court challenges in 2013 and Semitropic leased the islands for $3 million in 2014 ready to reap that water.

First, though, it hired a contractor to spray weed killer, which drifted onto nearby vineyards.

The drift was, apparently, so bad the San Joaquin County District Attorney’s office was investigating whether criminal charges were warranted. None have been filed to date.

That same year, by the way, the state Water Resources Control Board issued curtailments on water transfers out of the delta due to drought concerns.

Semitropic ended up with no water and no crops but a lot of legal bills.

It has continued to lease the islands (later bought by MWD) for between $1 million and $1.2 million a year and rented them out to farmers, Gianquinto said.

In an effort to increase its water banking options, Semitropic entered into a joint powers agreement with the then-Antelope Valley Water Bank (now called the Willow Springs Water Bank), the Rosamond Community Services District and CalPERS (yes, the public employee pension agency) to develop a water bank on the desert.

“It was a marketing strategy at the time,” Gianquinto explained. “The idea was someone who banked with us could choose to have capacity up there and have more flexibility to move water between the two programs.”

It never took off, he said.

Even so, he added, Semitropic didn’t come “out of pocket” on that effort.

Semitropic has already come out of pocket — big time — on its latest scheme.

It plans to build a small reservoir next to the California Aqueduct near Kettleman City, capture floodwater off the Kings River and bank it in Semitropic.

The district has already spent $40 million to buy an easement on the property owned by John Vidovich.

The environmental work has been chugging along but the district will need $500 million to actually build the reservoir, punch a pipeline into the aqueduct and plumb in the water bank.

It plans to seek $250 million of that from Proposition 1 funds.

MEANWHILE, BACK ON THE RANCH

Some of Semitropic’s efforts make sense to district farmers.

Some, not so much.

Both Andreotti and John Wedel, whose family goes back three generations in Semitropic, were good with the district's plan to charge $500 an acre for any new farming in the district.

That will nip the “plant and pump” crowd in the bud, they felt. Or at least force those growers to help pay for new water.

But the satellite imagery plan and extra charges had them shaking their heads. (Especially since Semitropic just raised land assessments by $100 per acre in 2014.)

Working with California Polytechnic State University, Semitropic has gathered satellite imagery of crops in the district going back to 2005 and determined the average amount of evapotranspiration, or ET, is 2.28 acre-feet per acre.

That is proposed to be the baseline.

If a grower goes over that, he’ll pay $90 per acre-foot for every additional acre-foot.

If growers use less than that, they receive a $60 credit, according to the proposal being voted on Wednesday.

Wedel, who grows walnuts and almonds, had lots of concerns.

He keeps very close track of his crops and has devised a way to rotate blocks of trees and is using the fallowed land to flood with excess water and replenish the ground.

“I’ve spent a lot of money, do I get credit for that?” he asked.

He’s also meticulous about how much water he runs on crops.

“What happens if their calculation of how much water I used don’t match mine?”

And the vote is based on parcels — one vote per parcel.

Wedel owns 1,400 acres in one spot but it’s spread over two parcels. He has friends with only 300 acres, but they’re divvied up in 54 parcels.

How is that fair, he wondered.

In fact, most other banking deals, including some other Semitropic deals, require 30 percent or more of banked water to be left in the ground.

But Semitropic’s deal with MWD focused more on fees than water.

Now, Gianquinto said, it could be hard to renegotiate with so many other banking options available to MWD.

Either way, he insisted, everything Semitropic is doing is about maintaining or growing its water in order to keep farmers in business.

Other local ag water districts are likewise planning to use ET to determine consumption and may also attach tiered rates to that consumption.

“In order to accommodate that use, districts have to buy more supplies or reduce demand in other areas,” said Rosedale Rio-Bravo Water Storage District General Manager Eric Averett.

The Sustainable Groundwater Management Act doesn’t allow for much else.

That didn’t alleviate Andreotti’s frustration at how the new rules are affecting everything from the cost of farming to the value of his land.

“I bought land that had water underneath it,” he said. “How am I gonna sell it with none?”