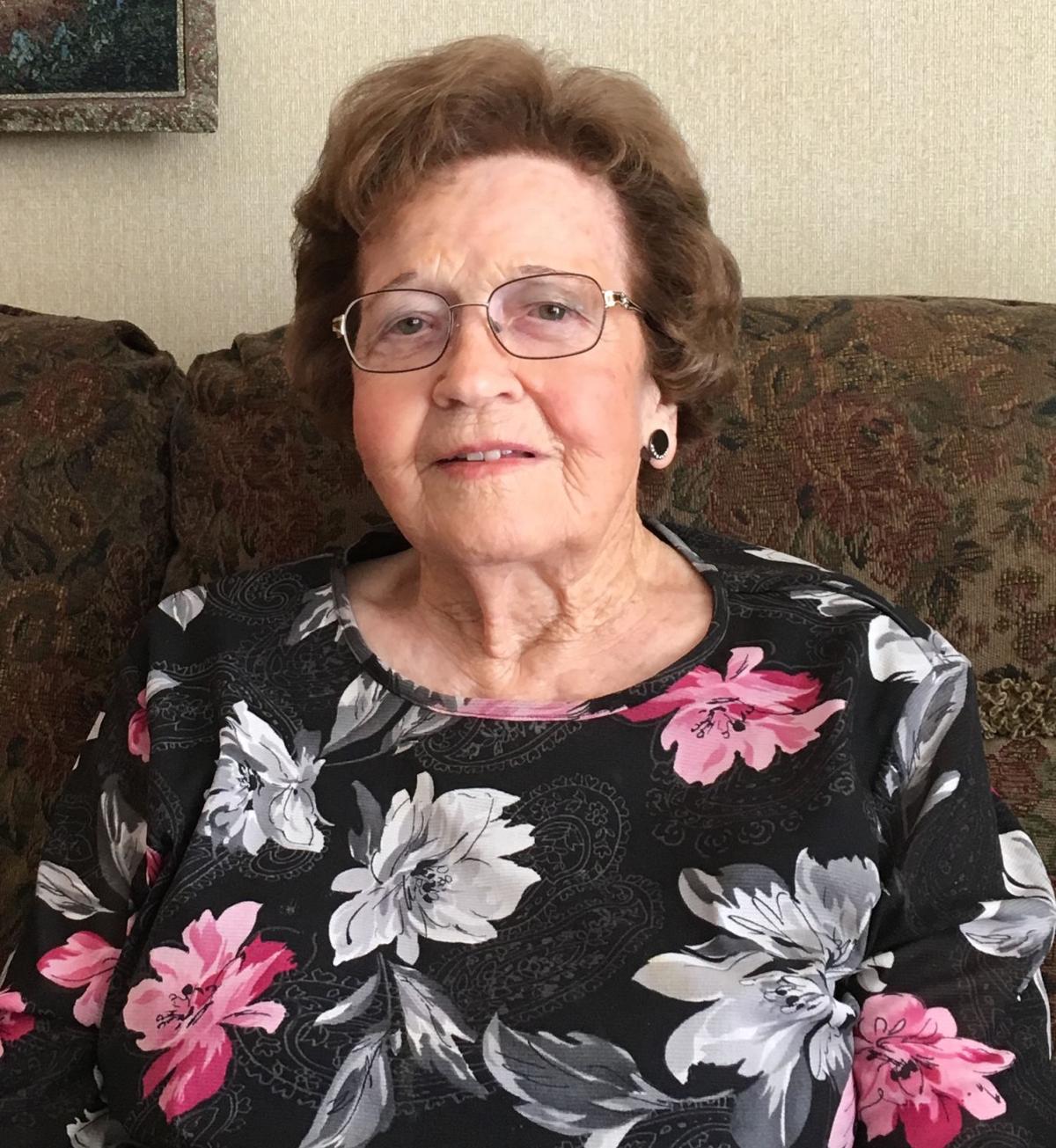 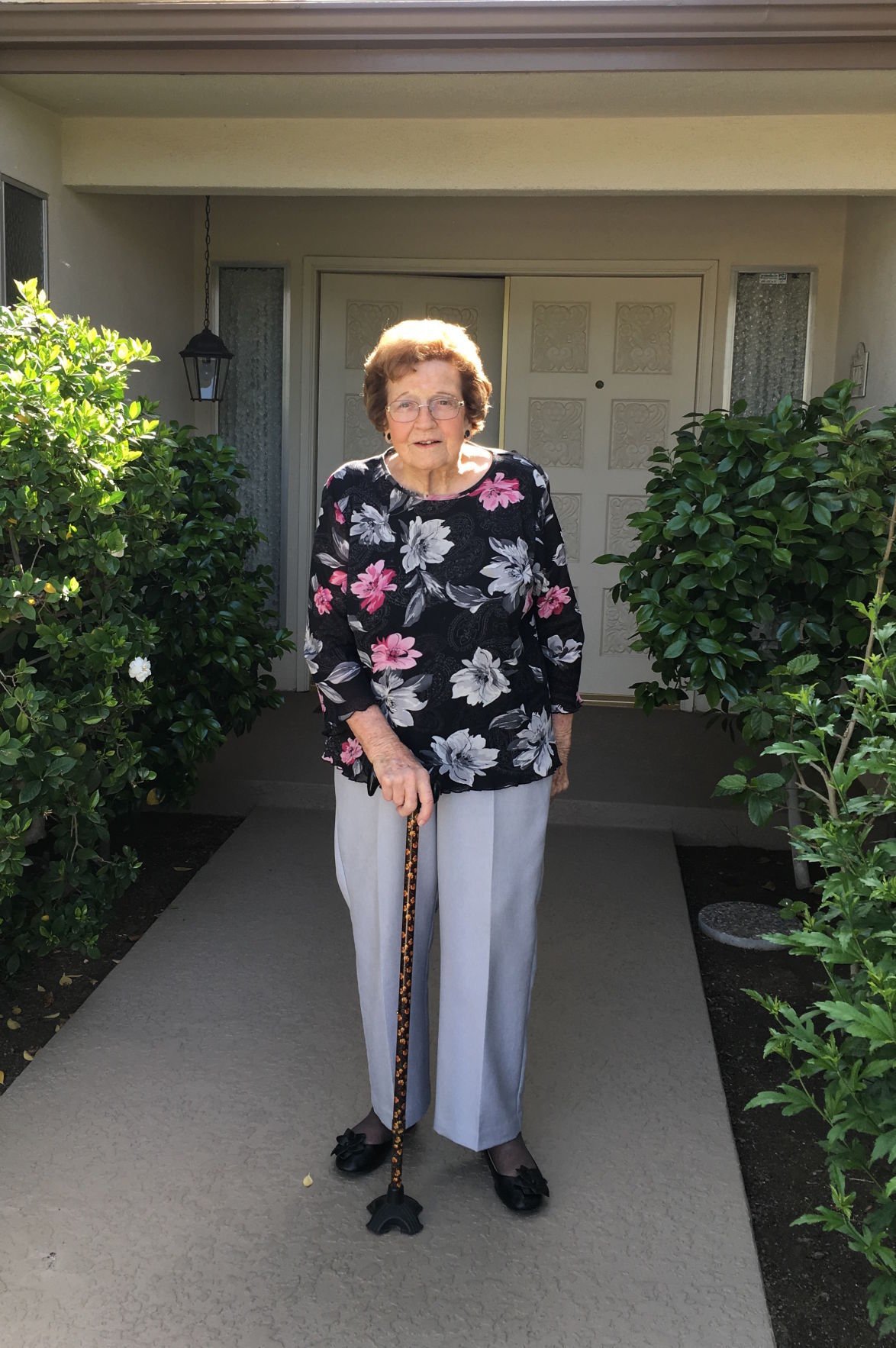 Leona Lachenmaier, 95, stands outside her Bakersfield home. She is one of many local royalty owners concerned that anti-oil initiatives in other counties could affect Kern's oil production. 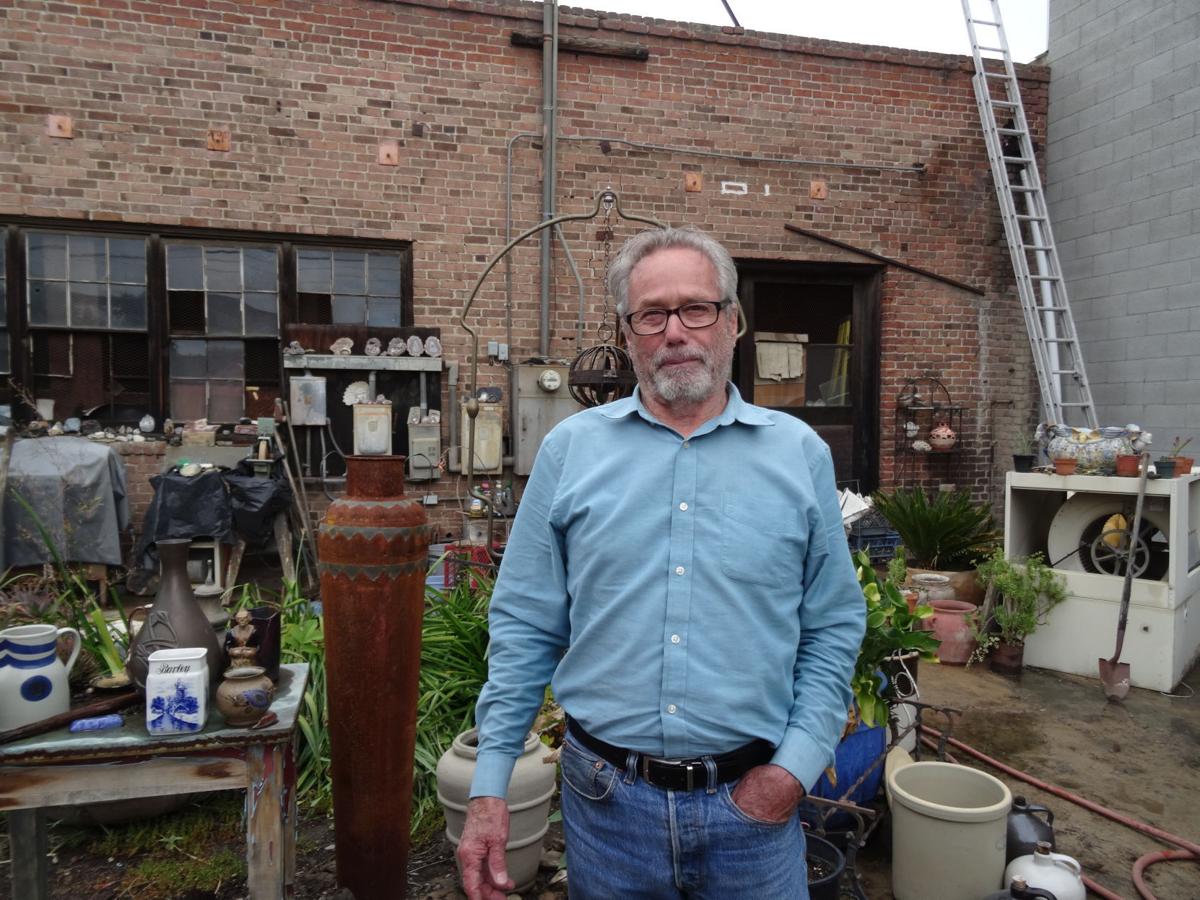 Chris Vanderlei stands in the back of his art and antique shop in downtown Bakersfield. His oil royalties help make ends meet. 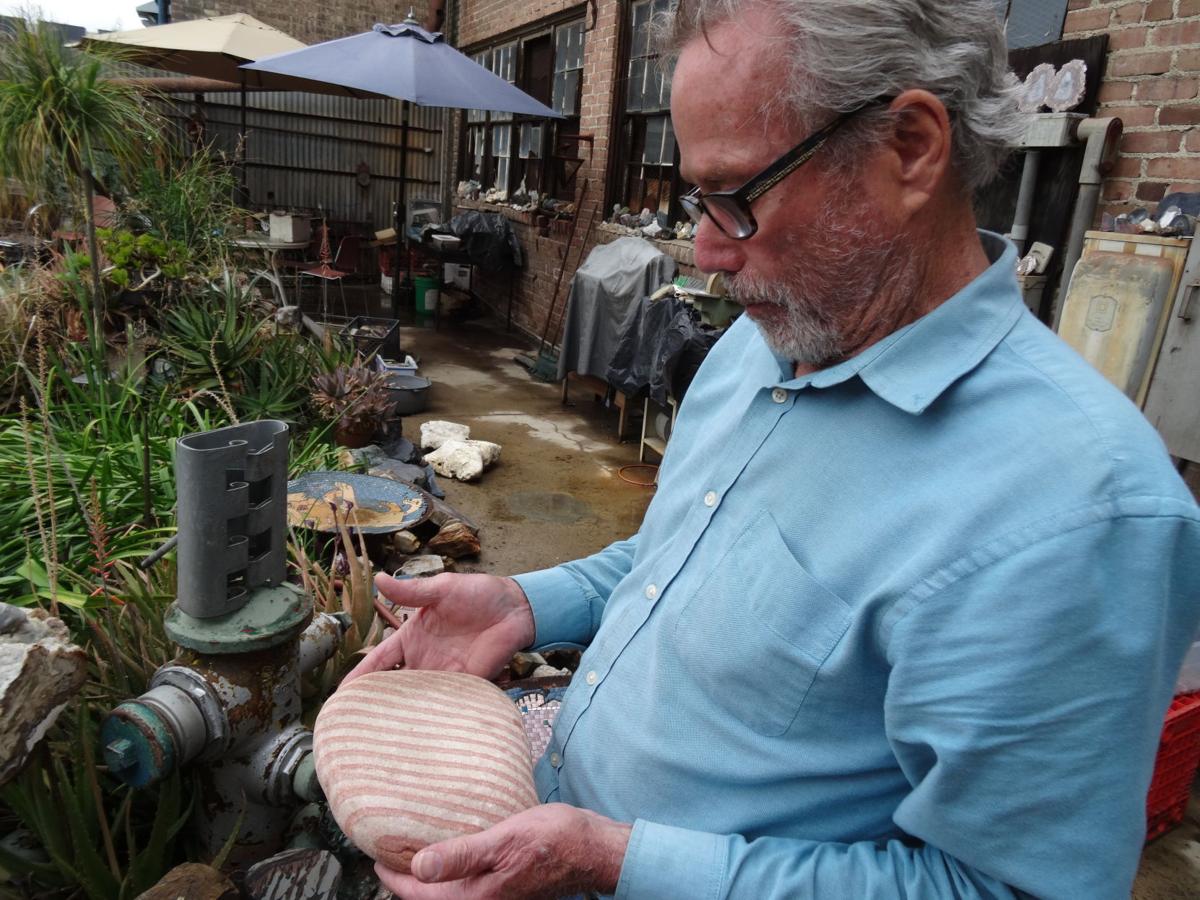 Chris Vanderlei looks at a peculiar rock for sale in is art and antique shop in downtown Bakersfield. Vanderlei inherited a small oil royalty right from his mother. 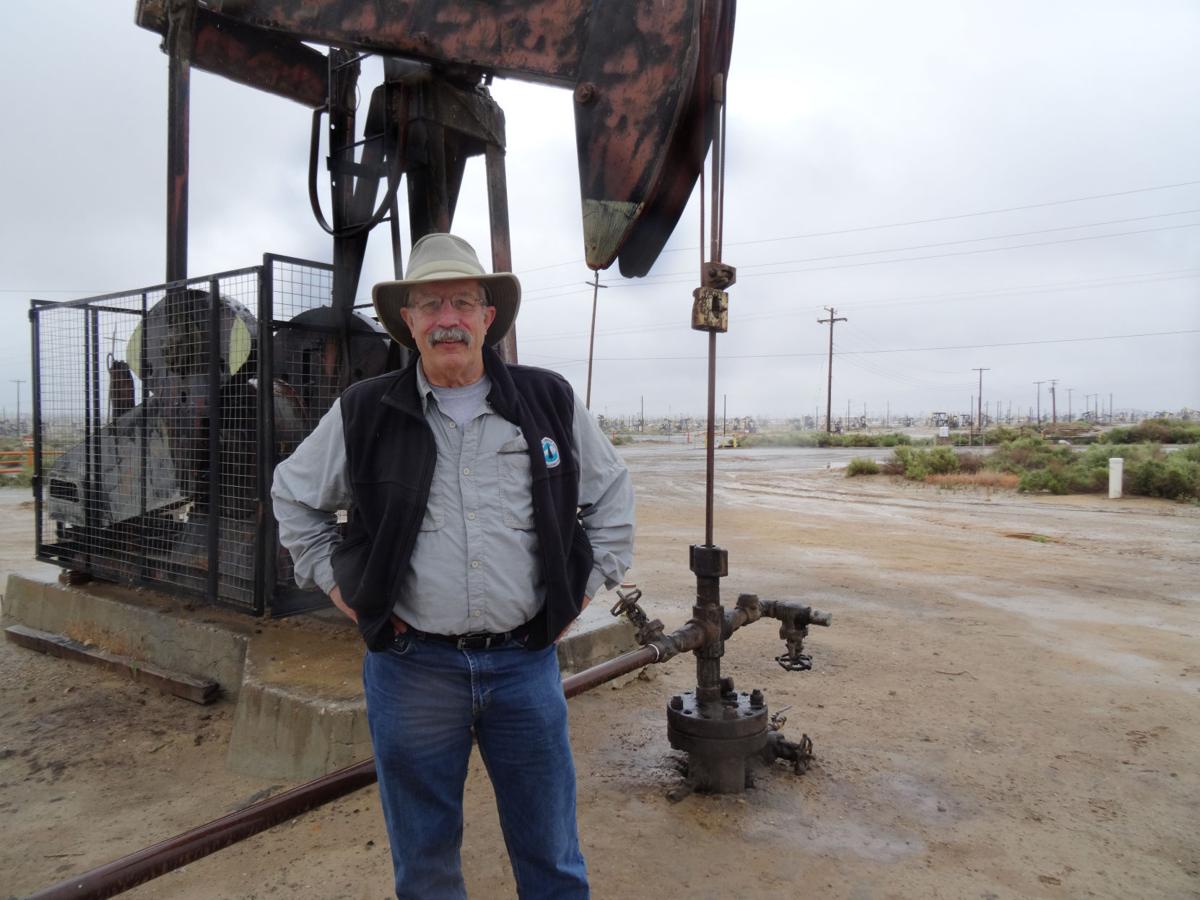 Paul Hacker stands next to one of the pumping units from which he receives a small royalty.

Leona Lachenmaier, 95, stands outside her Bakersfield home. She is one of many local royalty owners concerned that anti-oil initiatives in other counties could affect Kern's oil production.

Chris Vanderlei stands in the back of his art and antique shop in downtown Bakersfield. His oil royalties help make ends meet.

Chris Vanderlei looks at a peculiar rock for sale in is art and antique shop in downtown Bakersfield. Vanderlei inherited a small oil royalty right from his mother.

Paul Hacker stands next to one of the pumping units from which he receives a small royalty.

Because bad ideas are like zombies, they just keep coming until a cheerleader cuts their heads off with a chainsaw. (It’s a thing, go ask a teenager.)

Anyhow, there are so many reasons to shake your head at the purported anti-fracking initiative known as Measure Z that it’s hard to pick just one. (Wells in Monterey County aren’t fracked, to start with.)

But how about that the measure strips people of their property rights?

Say you inherited a small bit of land near the San Ardo oil field in southern Monterey County.

It’s not really worth much.

Then someone discovers it’s rich with oil and you’re lucky enough to own the mineral rights.

So, those mineral rights you own are worthless.

Monterey voters might as well have walked into your house and smashed your TV.

Activists like to paint these anti-oil measures as the environment versus “big oil.”

But there’s a lot more to it.

And Monterey County is about to get an earful from the more than 70 royalty owners who, through the California chapter of the National Association of Royalty Owners, or NARO, joined Chevron and Aera Oil in suing Monterey to scrap Measure Z.

“Kern County should pay attention because this is the first time a measure like this has passed in a significant oil producing county,” said Ed Renwick, vice president of the California NARO chapter. “Measure Z backers have been all over the state trying to pass similar measures. This isn’t something that just sprang up locally.

“And if it survives this court challenge, you’re likely to see something similar in Kern County.”

It’s highly doubtful such a measure could pass here.

But that’s not what worries local royalty owner Paul Hacker.

“It’s the state,” he said. “If the Legislature thinks a majority of people want to ban fracking or drilling, I could see it happening.”

Hacker is a geologist who obtained his royalty share as payment for consulting work.

He’s one of hundreds of thousands of “little guys,” as he calls them, who have bits and pieces of oil wells throughout the state.

Hacker’s royalties accrue from a scattering of wells in the South Belridge field, which is historic as it was originally developed by Clarence Berry, of Berry Petroleum, in 1923.

When the price of oil was up around $100 a barrel, Hacker’s royalty checks were a nice supplement.

After the price crashed, his checks dwindled and his consulting work dropped to nothing.

He took work as an Uber driver to bring in more cash flow.

“In this state, who do you go to for help?” he said. “It’s so one-sided, stacked against us ‘filthy rich’ oil people.”

Hacker, like the other local royalty owners I spoke with, hope NARO can beat back Measure Z in court.

Renwick said the NARO lawsuit challenges Measure Z on a number of fronts but following are the major complaints:

Ultimately, Renwick predicted, the final decision will come from a higher court, perhaps even the U.S. Supreme Court, because both sides know this fight goes beyond Measure Z.

It’s about whether oil production in California should continue.

“People in Kern County need to worry because this is a preview of coming attractions,” Renwick said.

Kern County Planning Director Lorelei Oviatt has been following Measure Z, and other measures like it, and agreed with Hacker that if the anti-oil folks get enough traction, they’re likely to go back to the Legislature for another attempt at a statewide ban, at least on fracking.

“And that would put Kern County out of business,” she said.

Otherwise, she said, almost every land-use-planning-by-initiative attempt she’s seen since the 1980s has been disastrous.

“When you set land use restrictions through the voters, you have to go back to the voters to change anything,” she said.

That creates an inflexible system that doesn’t respond to real-life economic and other changes.

“There’s no way we could have predicted that Kern County would get $35 billion in private, international investment dollars for renewable energy projects between 2009 and 2017,” she explained. “What if voters had decided they didn’t want renewables in eastern Kern County back in 2006 and banned that? Where would we be?”

Aside from that, she said, Measure Z is just weird.

“They don’t have fracking in Monterey County,” she said. “It’d be like Kern voters passing a law that says we want more beach access locally, when we don’t have any beaches here.”

Contact Californian columnist Lois Henry at 395-7373 or lhenry@bakersfield.com. Her work appears on Sundays and Wednesdays; the views expressed are her own.

It’s kind of amazing when you scratch the surface, how many royalty owners there are in Kern County.

“A lot of people don’t even know they own mineral rights until an oil landman knocks on their door,” said Ed Hazard, president of the California Chapter of the National Association of Royalty Owners (NARO).

Hazard, who lives in Bakersfield, didn’t start learning about his family’s royalties until his mom was in a convalescent home with early stage dementia.

“I looked around and realized everyone in the family who know anything about it was gone.”

He began educating himself and became part California’s NARO group in 2013.

He said there’s an estimated 600,000 royalty owners in California, though, again, some people don’t know it.

Bakersfield resident Chris Vanderlei, who owns an art and antique shop downtown, is one of those 600,000.

The royalties were passed down to him and his brothers through one of his grandfathers.

For Leona Lachenmaier, the money was never something she thought about while her husband, Ralph, was alive.

After he died 12 years ago, Lachenmaier, now 95, started educating herself.

The rights originated with her father-in-law who farmed a vineyard in Arvin for an oil man who would give him tips on where to buy little plots of land.

“I’ve learned a few things over the years,” she said. “Like you can negotiate for more money. You don’t just have to take what the oil company first offers.”

Hazard, who volunteers his time with NARO, said he got involved for people like Lachenmaier and the many other families who don’t have the kind of political clout of a Chevron or Mobile, or even the large environmental groups.

“Plus I think it’s important that we produce the oil here, in California, where we have the strictest environmental regulations and we have control over our own energy source,” he said.

Think about it, he added:

“Would you rather do business with someone like Leona? Or Putin?”

Nobody has the right to infringe on others private property rights. If they choose to do so they have the obligation to pay for it. So if we're speaking in terms of asparagus and you choose to rip mine out you better be prepared to pay for it.

"Say you inherited a small bit of land near the San Ardo oil field in southern Monterey County." So a handful of individuals who may have inherited a plot of land anywhere can use their property as they see fit, except where it infringes on the rights of other people. No, you can't install a gun range, or a whorehouse, or a shooting gallery for heroin addicts, even though it might fatten your piggybank.

Residents do have the legally sanctioned right to zone land as they see fit. Those who put personal profit above all else might think differently it if were their wells, and their aquifers, and their ag or tap water rendered unfit for human consumption.

If you trust the oil industry to tell you it's no problemo, you're insane, bought, or not paying attention.

And, there's that little issue about climate change (recognized as a global threat by the U.S. military) that is leading wise investors away from oil and into renewable energy.

What has the oil industry specifically done to lose your trust?

Does the military know for sure that climate change is real and caused by oil production in Monterey County?

Don't the pros of native California oil production, in the most heavily regulated state in the US probably the world far out weigh the cons?

There has been "climate change" since the beginning of the earth. The Bering Strait was once frozen allowing the migration of the first Neandrathals. Read some history books printed prior to the year 2000. Ever heard of "the ice age"? I guess the Earth changed because the pre-historic creatures didn't comply to proper zoning, and the pollution killed them. Or was it because they had too many guns? You remind me of why I moved out of W. Bakersfield, too many people like you.