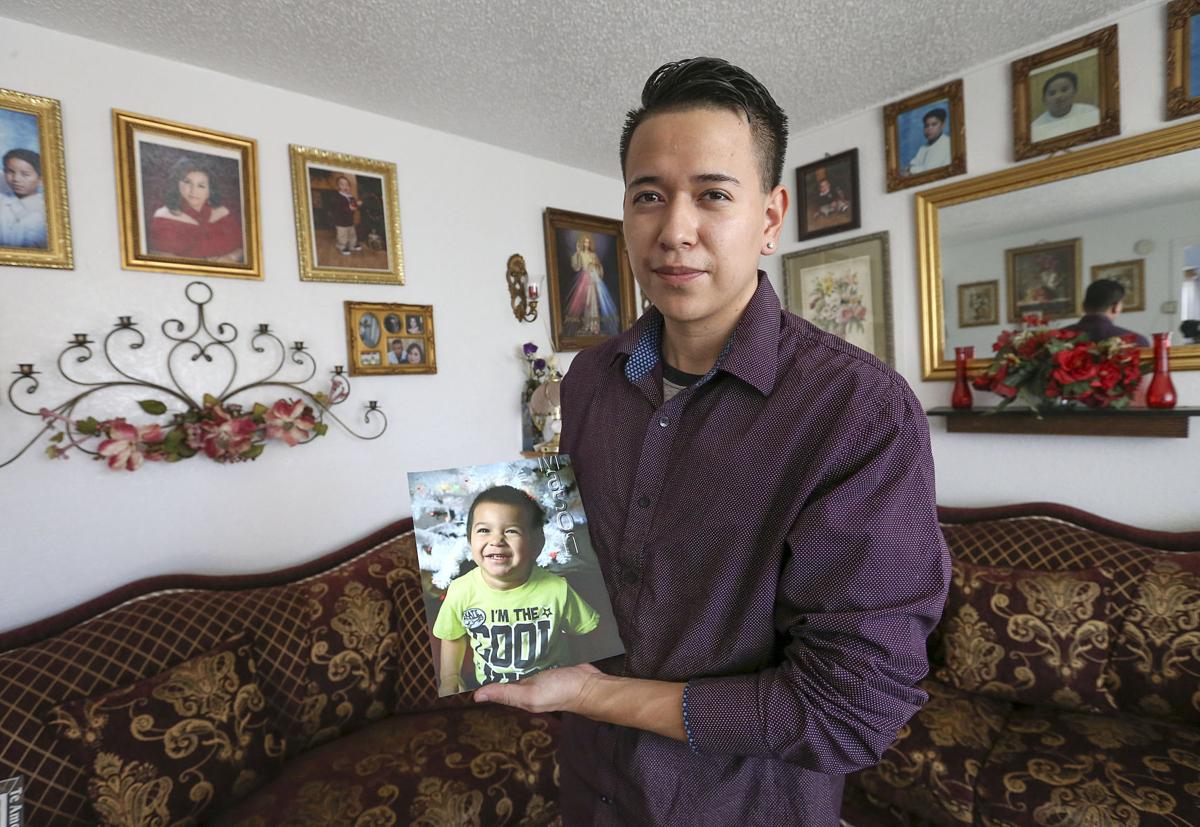 Standing in his family's living room with walls covered with family photos, Jesus Flores holds a photograph of his son, Mason, who is now 2-years-old. At 2 months, Mason had medical problems and authorities said Mason had shaken baby syndrome. Jesus was arrested and spent two years in jail but was acquitted in June. He still can't get his baby back and CPS is about to adopt him out. 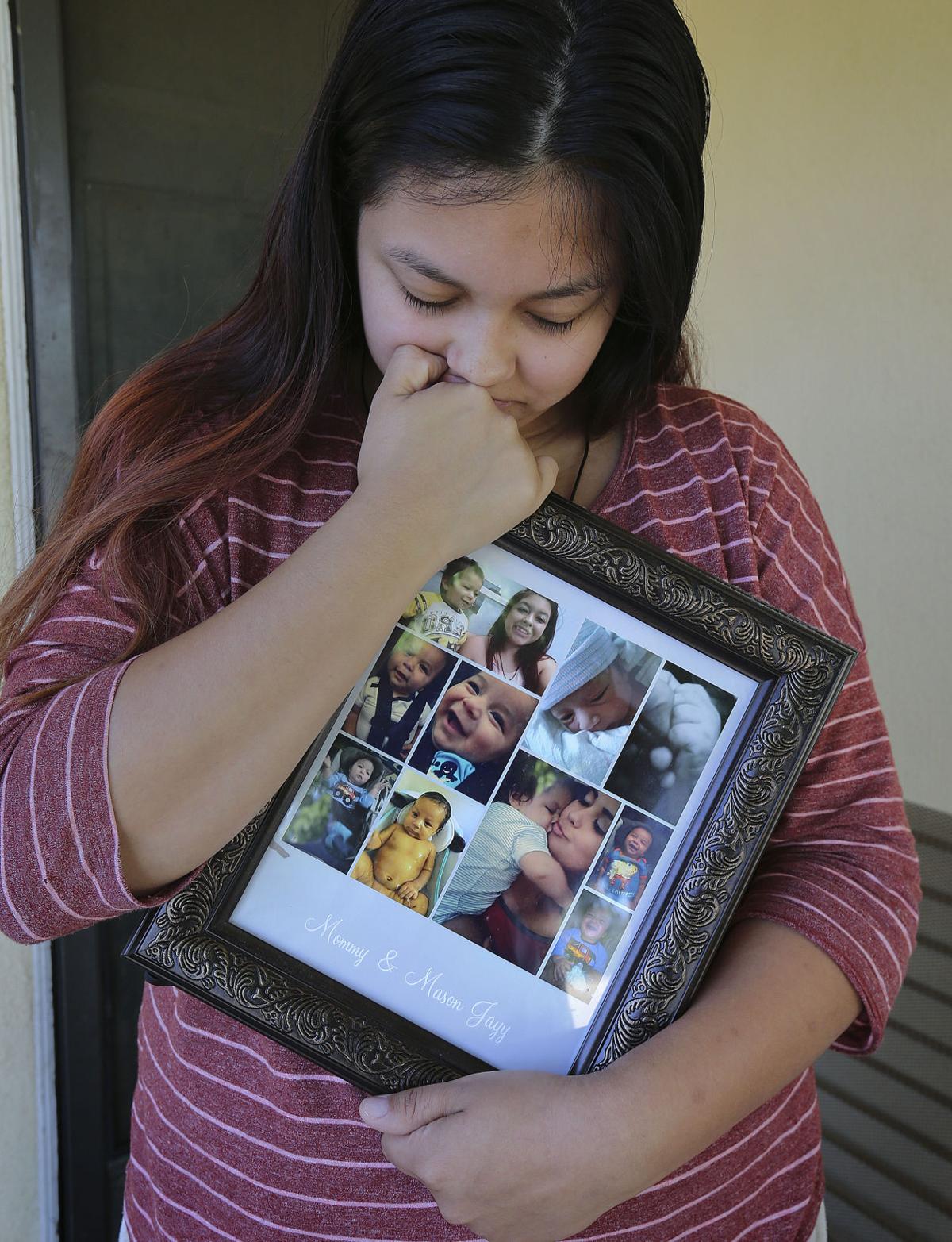 Sara Guzman was 18 when she had Mason who had severe medical issues that were diagnosed as shaken baby syndrome. Her boyfriend at the time, Jesus Flores, was arrested ad spent two years in jail before he was acquitted in June. Sara was never accused but CPS took the baby and Mason is up for adoption.

Standing in his family's living room with walls covered with family photos, Jesus Flores holds a photograph of his son, Mason, who is now 2-years-old. At 2 months, Mason had medical problems and authorities said Mason had shaken baby syndrome. Jesus was arrested and spent two years in jail but was acquitted in June. He still can't get his baby back and CPS is about to adopt him out.

Sara Guzman was 18 when she had Mason who had severe medical issues that were diagnosed as shaken baby syndrome. Her boyfriend at the time, Jesus Flores, was arrested ad spent two years in jail before he was acquitted in June. Sara was never accused but CPS took the baby and Mason is up for adoption.

Jesus Flores’ story is one that should send a shiver down all our spines.

It’s also a tale that opens a door on issues most of us would probably rather leave closed. But we’ll get to that in a second.

On May 21, 2015, Flores, then 19, and his girlfriend, Sara Guzman, then 18, panicked when their 2-month-old son, Mason, suddenly went limp and stopped breathing.

Mason was rushed to Bakersfield Memorial Hospital, then taken to Valley Children’s Hospital in Madera.

The diagnosis was a subdural hematoma, bleeding on the brain.

Jesus, who had been alone with Mason when the baby collapsed, was arrested and charged with felony child abuse.

He spent the next two years in jail awaiting trial.

But Mason, now a little over 2 years old, is still lost to him because Flores’ parental rights were terminated while he was waiting to go to trial. (See sidebar)

The little boy is set to be adopted this coming fall, Flores said.

It’s unclear if Guzman's rights were also terminated. That’s something she’s getting legal help to clarify.

She knows for sure her reunification services were stopped because she refused to turn on Flores and say he hurt Mason.

Though she has moved on and started a new relationship, Guzman remains steadfast that Flores would never hurt Mason.

“They told me the only thing messing me up from getting Mason back was that I stood by Jessie (Jesus),” Guzman said. “They said I needed to go against him. But that wasn’t right. I knew he wasn’t the kind of man who would ever hurt his baby.”

She noted that no one seemed to care that Mason had a difficult birth, even spending his first day in the neonatal intensive care unit. When he was a month old, they took him to the hospital because he had trouble breathing and passed out.

Flores and Guzman were told at the time it was just a throat infection and he was fine.

Once they were in the criminal justice system, though, she said those previous issues were all attributed to child abuse, including bone fractures no one knew he had.

Experts testified on Flores’ behalf that the breaks were actually healing and appeared to have been caused by an early vitamin deficiency.

Guzman told police there were very few times Flores cared for the baby alone as she was at home and the couple lived with her parents. So, previous abuse would have been noticed.

Besides, she told police when she was interviewed on May 21, 2015, “Jesus loves that child more than anything.”

Guzman has since had another baby, a 3-month-old girl.

She finds it ridiculous that CPS has deemed her unfit to have Mason back but is fine with her mothering skills for her daughter.

She hasn’t seen Mason since last December and feared she never would again.

With Flores’ acquittal, though, Guzman said she is hoping things may have changed, though CPS workers continue to tell her there’s no hope.

For his part, Flores said he’d like to make another legal run at having his parental rights re-established but he’s failed once already on appeal and isn’t sure what else he can try.

He has set up a gofundme page to raise money to hire an attorney. (www.gofundme.com/reunite-me-with-my-baby-boy-mason)

For now, he’s focused on finding a job, enrolling in adult school and getting used to the idea that he’s free.

“The doctors never interviewed me, to ask me how I handled him. They just went off the police report. They saw certain signs and said it was child abuse,” Flores said. “My family was ripped apart. I want people to know that this does happen. Because I never thought in a million years something like this could happen to me, to us.”

Exactly how Flores was acquitted is its own story, which, as I said, cracks a door on some issues in the child abuse realm that are uncomfortable to consider.

I can remember reading about “shaken baby syndrome” years ago. It’s now called abusive head trauma, but the theory is the same.

Someone shakes a small child hard enough to snap the head back and forth and that acceleration/deceleration can tear veins and trigger swelling and bleeding, called a subdural hematoma.

The subdural hematoma is typically accompanied by retinal hemorrhaging.

Such injuries can’t be caused by falling off a bed or roughhousing or rocking, most of the medical community agrees.

Those injuries are an indication that someone grabbed the child and shook him — violently.

The onset of symptoms, severe lethargy, problems breathing, seizures, caused by the shaking is fairly rapid, meaning the last person alone with the child is typically the key suspect.

In recent years, more doctors have begun to challenge the science behind shaken baby syndrome.

Doctors have said blood vessels in the brain are thin and known to bleed, sometimes without any trauma, or by a seemingly harmless fall.

And the onset of symptoms can be days, not hours, some doctors now say.

And retinal hemorrhaging can be caused by obstructed airways, heart disease or infections, according to an exhaustive 2015 Washington Post article that looked at the medical and legal debates of shaken baby syndrome. (https://tinyurl.com/ya54ofcp)

Many of these questions about shaken baby syndrome aren’t new.

We’ve had two high-profile cases locally that showed medical certainty about injuries to a baby is anything but certain.

In 1995, injuries in a supposed shaken baby case were actually caused by a vacuum extraction method used in the 10-week-old baby’s delivery. That child died and the father was arrested, but later released.

In 2004, a man was sent to prison for allegedly shaking a child. The child survived with severe developmental problems.

After the boy died in 2007, an autopsy showed he had severe brain lesions of an unknown cause and the District Attorney's office declined to file more charges.

The man had already spent three years in prison and was out on parole when the finding was made.

STANDING BY THE SCIENCE

He said it’s ludicrous to try and pin these injuries on birth trauma or falling off a couch and he was clearly frustrated by the question.

“You call it a growing debate,” he said. “It’s not growing, it’s just persistent.”

He said he sees the same experts testifying for the defense over and over with the same alternate theories for how the child was injured, from vitamin D deficiencies to genetic bleeding disorders.

He said his team tests for those and other things before diagnosing a case as child abuse.

“Every case we get isn’t child abuse,” he said. “For instance with retinal hemorrhaging, bleeding abnormalities do occur. But not in multiple layers and large amounts.

“We do try and rule other things out. It would be awful if we missed a medical finding that could be the reason this kid has something wrong with it.”

He was shocked that Flores was acquitted “especially since he did confess to shaking the child, but in a milder manner than could have caused this child’s injuries.”

I watched the tape of Bakersfield Police Department detectives interviewing Flores and I would hardly consider that a confession.

Flores uses a doll to show detectives how he rocked Mason earlier in the day to try and comfort him.

In the video, Flores cradles the doll, supporting its head and rocks him back and forth.

He tearfully asks if that could have been what hurt his son?

“Could that have caused it?” he asks over and over. “If it did, then I’m the worst father…”

One of the detectives would later testify that Flores demonstrated shaking the doll, causing its head to violently snap back and forth.

Not even close. (See video at bakersfield.com)

Flores’ attorney, David Faulkner, said he was lucky the court agreed to pay for medical experts in this trial.

Because they were able to show that Mason had real health issues unrelated to abuse.

He wasn’t growing properly, the experts testified. His head grew more quickly than was normal causing an increase in fluids, which could have caused his seizure. Same with the retinal hemorrhages.

In fact, an MRI of the baby showed he had another brain bleed while in Valley Children’s Hospital on June 27 and again several months later while in foster care.

He was also diagnosed at Valley Children’s as deficient in vitamin D, a likely explanation for his bone fractures.

“This child had real issues,” Faulkner said. “Instead of looking at that, the doctors and police decided my client must have been shaking his baby at every opportunity.”

The medical information about Mason both before and after he was taken from Flores and Guzman made a real impact on jurors, according to jury foreman Joey Zasoski.

“It could have been a chronic condition,” Zasoski said.

He wanted to make it clear that he felt police were doing their jobs based on the medical information they’d been given.

“I tend to trust the medical profession. But in this case, I think the doctors jumped the gun,” he said. “From the first doctor who saw Mason, they all assumed it was child abuse and that was relayed to police.”

The experience left him wondering how many innocent people might be in jail based on faulty medical diagnoses.

“I think it happens more than we want to believe,” he said.

Opinions expressed in this column are those of Lois Henry. Her column runs Wednesdays and Sundays. Comment at http://www.bakersfield.com, call her at 661-395-7373 or email lhenry@bakersfield.com. You can also follow her on Twitter @loishenry or on Facebook at Lois Henry.

Winning at trial, losing his son

Jesus Flores was found not guilty of abusing his son. But the baby is still being adopted out.

Q: How can a child be removed from a parent found not guilty of abuse by a criminal court?

A: The juvenile dependency court process is very different than the criminal process.

Q: Why wouldn't the juvenile court process wait for the criminal process to play out?

Q: Can the juvenile court process be unwound since the criminal process has deemed Flores not guilty?

A: In dependency cases, the child's parents or attorney can make a request to "unwind" the juvenile court process.