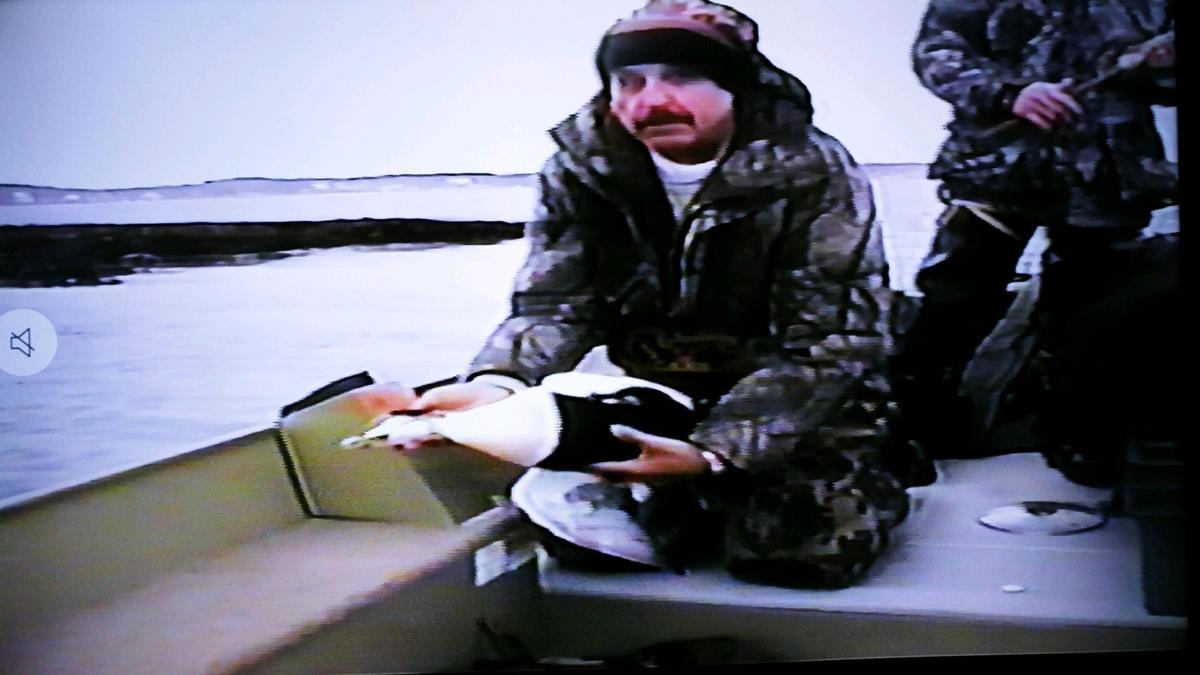 Waterfowler Robert Burnham is shown with a beautiful American Eider bagged during a trip to the Maine coast. 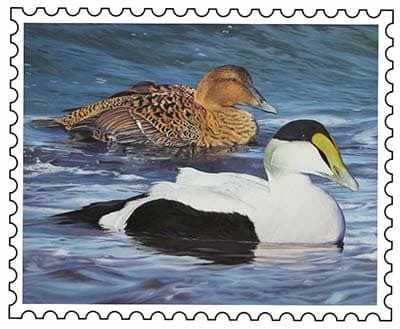 Pictured is the 2017 state of Maine waterfowl stamp featuring a pair of swimming American Eiders.

Waterfowler Robert Burnham is shown with a beautiful American Eider bagged during a trip to the Maine coast.

Pictured is the 2017 state of Maine waterfowl stamp featuring a pair of swimming American Eiders.

Some years ago during the Ken Barnes Open Skeet Championships, a friend of mine, Robert Burnham and I were talking about old waterfowl hunts we had been on.

Robert mentioned that he had always wanted to take a trip somewhere and try to bag an Eider duck. The Eider is a sea duck that is the largest in the Northern Hemisphere, and can weigh up to six pounds.

Not only large, but fast, with some measured at speeds close to 70 MPH. The hens are re-known for their down feathers that have been used for centuries in the making of pillows, quilts and blankets. The down is also used for insulation in jackets, pants, and coveralls.

I, personally, have used them for hunting warmth for 60 or more years. I told Robert I would look into finding a guide on the east coast of the country where they are more plentiful, even though they are found on both Northern ocean sides of the United States.

He could do the gunning and I, as usual, would do my filming.

Robert and I flew out of LAX, and after one stop we landed in Portland, Maine. We were met by our guide for the trip, Captain John L. Nowinski. He gets the "Captain" up front because he is a member of the U.S.C.G. (unlimited).

I had gone online to find North Creek Guide Service, which he was the owner of. It sounded like just what we were looking for. After a very short ride, we ended up in the coastal town of North Yarmouth, got settled into a room, had dinner, and headed for bed. We were very excited thinking about what was ahead for us the following three days.

John picked us up early the next morning and we headed for the dock. He had a nice 20 foot boat that was used for the hunting, and he said we would be going right out into the middle of the bay to a stand of rocks that were exposed at low tide.

Robert settled into the front edge, and I positioned myself a few feet back with my camera. The guide began to lay out strings of diver decoys just off shore from where we were. There were about a dozen per string with one long line with an anchor attached.

Five of these lines made a very impressive spread that consisted of Eiders, Old Squaws, and Scoters. When he was done, John took the boat away from us about 400 yards. It didn't take long before a trio of White Wing Scoters locked up into the spread.

Robert fired away and dropped two of the birds. One was injured, and it took three more volleys to finish him off. You have to realize that all of these sea ducks have very heavy coats of fur due to the extreme cold weather conditions they exist under. That makes them tough to down sometimes with only one shot. But you rarely lose an injured one because the guide is watching them and always retrieves them when they swim far enough away from the spread.

A single Old Squaw was downed next. It was a beautiful drake, and had the long 10 to 12 inch tail they are famous for. That is why they are nick-named "Long Tails."

Most of the birds working the decoys were in small bunches. It wasn't long before Robert had a chance to bag what we really came for...an Eider. One big, beautiful drake locked up on the spread, and a few moments later was laying upside down in the sea. Robert let out a loud hoot, and I told him I had it all on film. A perfect clip.

It did not take long to fill his limit, and we were soon headed back to the docks for an early breakfast.

We were rained out on the second day of the trip, so we just went sightseeing around town that day. Spent a lot of time at an L.L. Bean sporting goods store, and just enjoyed seeing all of the Northeast architecture we had heard about all our lives.

Robert bagged another full limit of birds on the third day, and I got some terrific footage on video. All in all, it was one of the best hunts I have had the pleasure to film over the years. Good company, great accommodations, and that sea bird of birds...the Eider.