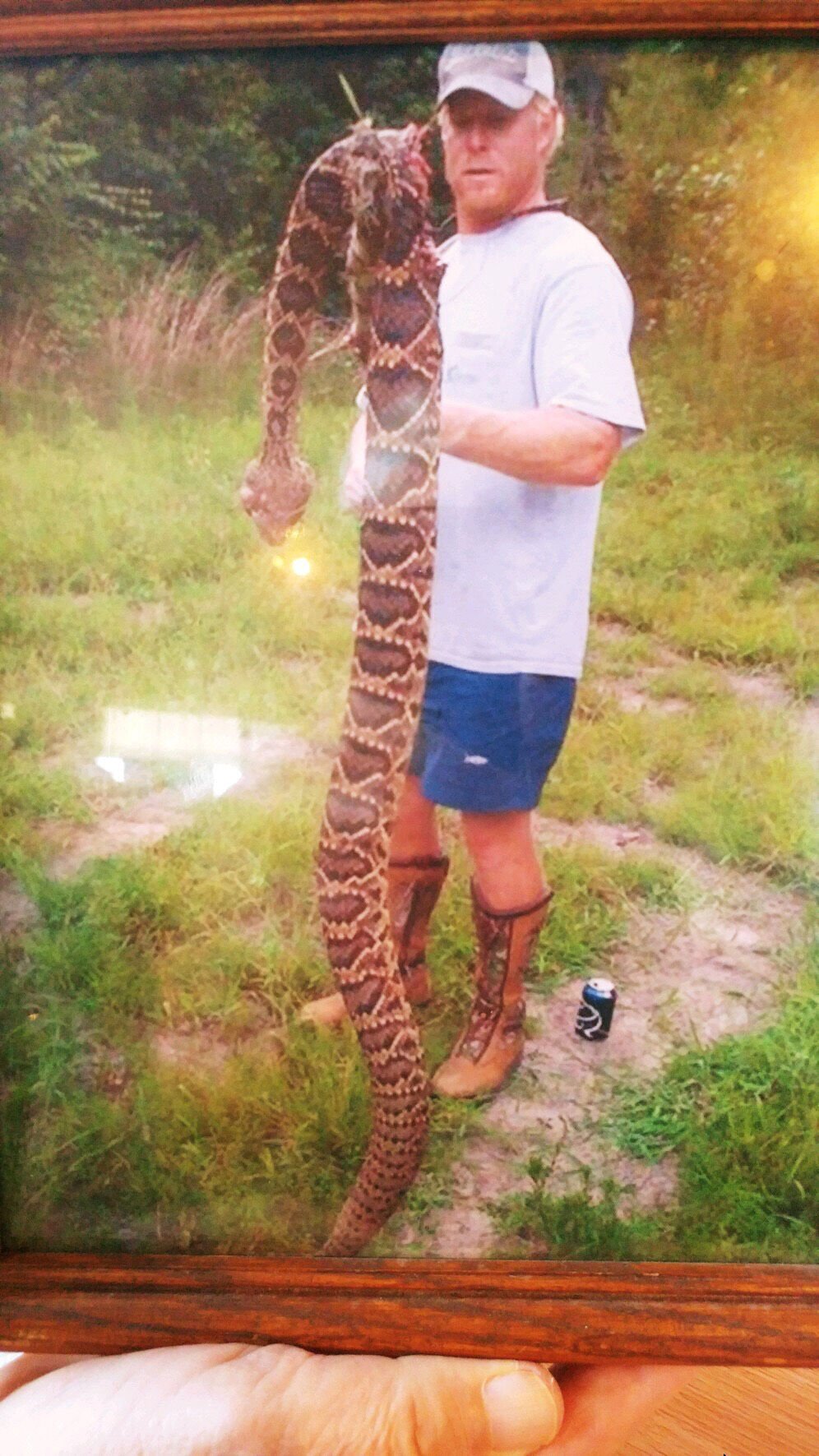 Photos courtesy of Ken Barnes Pictured is a Texas resident holding a monstrous 10 and 1/2 foot long Diamondback Rattlesnake nabbed in his back yard. 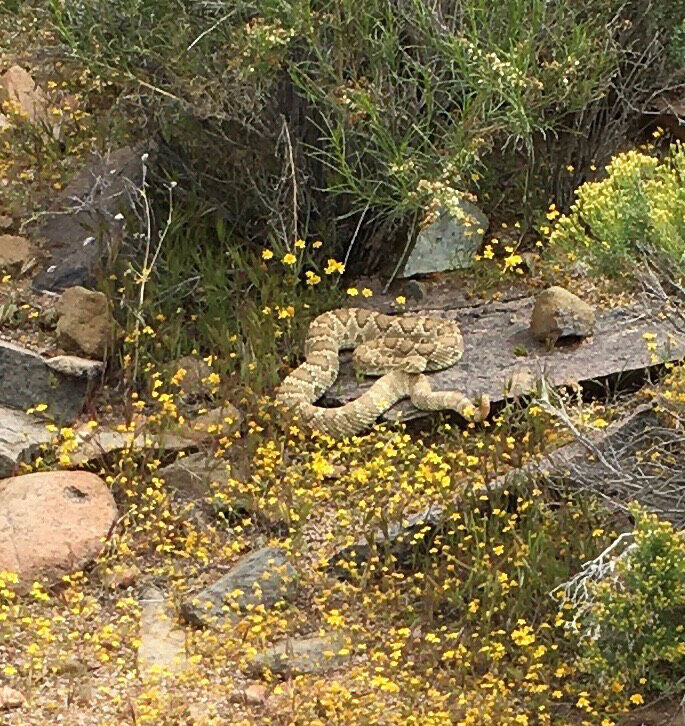 Photo taken a few weeks ago of a Mojave Green Rattlesnake. This reptile is known to have one of the most toxic and deadliest venoms on the planet.

Photos courtesy of Ken Barnes Pictured is a Texas resident holding a monstrous 10 and 1/2 foot long Diamondback Rattlesnake nabbed in his back yard.

Photo taken a few weeks ago of a Mojave Green Rattlesnake. This reptile is known to have one of the most toxic and deadliest venoms on the planet.

It was early last spring when my hunting partner, Steve Newbrough, and I were just loafing around the edges of our duck pond after the close of waterfowl season that year.

I can still hear his voice when he shouted, "Ken, don't move ... there's a rattlesnake just off your right foot."

I froze. Then, I slowly looked down and to the right, and sure enough, there it was. Not too big. About 24 inches and just stretched out length wise enjoying the sun.

I made a quick leap to my left, and thanked Steve for his good eyes. If there is one thing most of the people on the planet earth have a fear of, it is snakes.

Even though the majority of them are harmless, the average person has no desire to get close to one. That day was only the third time in my life that I had actually seen a rattlesnake in the wild.

The first was many years ago when Leroy Fontana and I were fishing in the Kern Canyon. We saw one sliver across the highway.

Back in the 1970's I was helping Roy Lemucchi clean out blinds before duck season at the El Cinco club, and we found a big one resting in the bottom of one of the cement units.

But, rattlesnakes are rarely, if ever, seen by the general public. Most of those who do see them are outdoors people like, fisherman, hunters, campers, and hikers. But, they are here, nevertheless.

I happen to have a friend who is not like the rest of us. He likes rattlesnakes. He goes out of his way to find them.

Here, there, and everywhere. If they had a language, he would probably understand what they were saying.

Phil Neighbors is one of the senior pastors of the Valley Baptist Church here in Bakersfield. He is a real joy to be around, and if there was ever an original "Okie from Muskogee," it is Phil.

A few years ago Steve Merlo and I joined Phil, his son, and some other friends for a rattlesnake hunt over in the Carrizo Plain area of western Kern County.

We all rambled through an old farm junkyard in the middle of the prairie, but were unable to find any snakes that day, though I was hoping to get some good video.

I reached out to Phil recently to hear in his words how he became so interested in rattlesnakes. He had the following to say.

"I grew up in Rattlesnake country in southwest Oklahoma. My dad's farms were located along the Wichita Mountains. These are not big mountains, but there are large granite outcroppings that are perfect habitat for rattlesnakes. So we had to learn how to coexist with the snakes.

"These rattlers can get very big, and the most common size is about four feet. The largest Rattlesnake that I caught in Oklahoma was five and a half feet long, and I have seen them over six feet.

"In Kern County, the most likely place to see a rattlesnake will be in the Sierra foothills. They are a common sight on those roads late in the evening in the spring time. If you go out to look at the wildflowers in the spring, you need to be very careful because that is rattlesnake territory. Also, rattlesnakes can be seen in rocky outcroppings in the Mojave Desert."

Phil went on to add the following.

"We have so many rattlesnakes in Greer county Oklahoma that we host an annual Rattlesnake Roundup. As many as 25,000 people will attend this event the last weekend of April in Magnum, Oklahoma, our County seat.

"Hundreds of rattlesnakes are caught and put on display in a large pit for the crowd to see. The snakes are harvested for their meat and skins. This also helps control the snake population in our county."

I asked Phil if he had ever been close to being bitten by a snake, and what was the scariest time he could recall.

He replied, "It may be strange to hunt rattlesnakes. However, if you live in rattlesnake country you're much safer to hunt them than to be taken by surprise. In all my years of hunting rattlers, I've never really had a close call.

"You keep your eyes wide open on the ground at all times and you watch your step. We always use rattlesnake tongs to capture the snakes and wear high top boots.

"One of the key ways to protect yourself if you see a rattlesnake in the wild is to remain calm. Stand perfectly still and the snake will go his way. If the snake does not move away, just slowly and carefully back away and leave him alone."

I just want to thank Phil for all this great information about rattlesnakes. He is really a one-of-a kind guy, and with any luck will be remembered in local "hissss-tory." ... Ha! I couldn't pass that up.