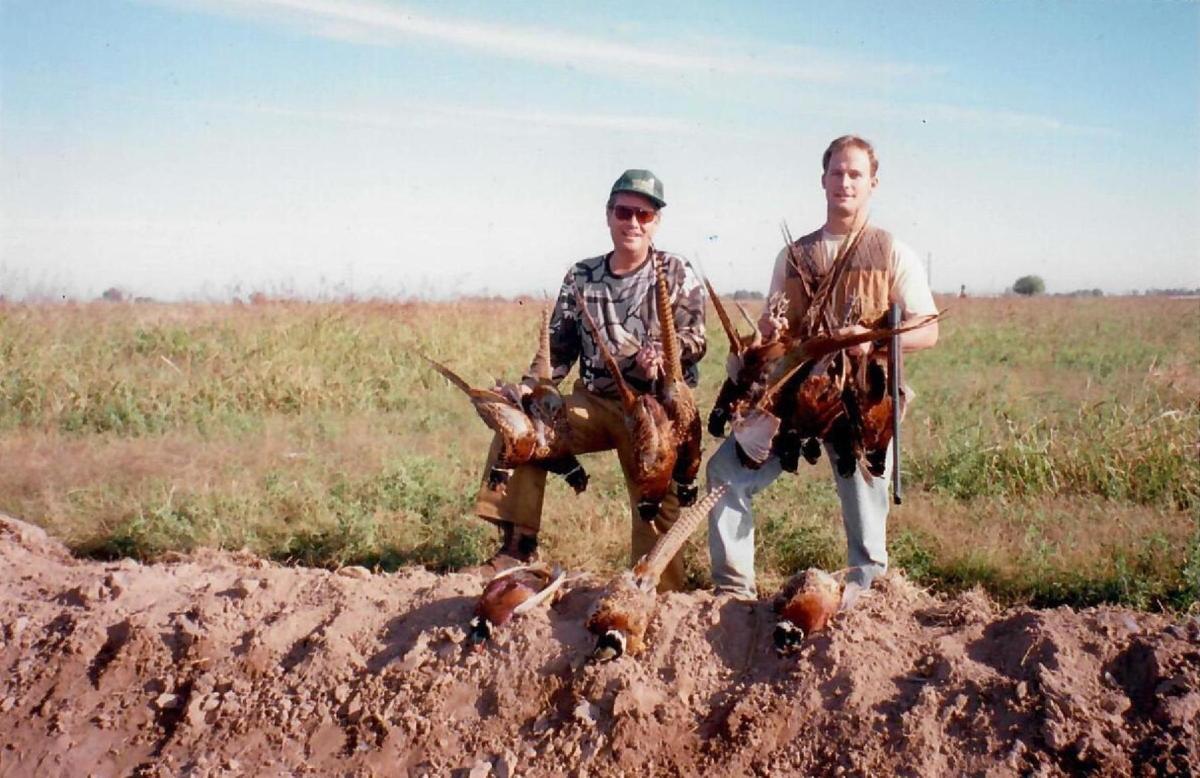 Pictured from left are Omer Long and his son Randy after a very successful pheasant hunt during a trip to Mexico, south of the Arizona border.

Many years ago when I was a student at North High School, I would spend weekends during pheasant season hunting with two of my teachers, Bob Newbrough and coach Jordan "Turk" Eliades.

Bob's son Steve is now one of my duck hunting partners. We used to roam the grain and cotton fields between Wasco and Corcoran and had awesome hunting. In those days, there were milo, safflower, and cotton fields everywhere.

These areas have all but disappeared now due to the expansion of orchard crops the past few decades. There was great cover along canals that gave haven to the birds, but most of that is gone also due to clean farming.

When hunting the cotton fields, we'd place two or three "blockers" at the end of the rows, and the rest of the party would become "walkers" as they made their way through the rows.

Most of the pheasants would run ahead of the group, but occasionally one would burst into the air as they strolled through the field. When the hunters would almost reach the end of the rows, there were always birds that would fly, and everyone got some shooting.

During the last sweep, we might get a dozen or more birds to take flight. Often times we'd find a canal road that sat high above a cotton field. While driving, you could look at least 100 yards down the rows into the field. If you saw a nice rooster sitting, you just ran down into the row and spooked him up for a shot.

Fast forward to a few years ago. I received a call from my long-time friend Omer Long down in Orange County. I first met Omer in 1969 when I was guiding for Black Brant at Morro Bay. He said he and his son Randy were planning a trip to Mexico to hunt pheasants, and wanted to know if I would like to go along and video the hunt.

I was very excited because I had never filmed a good pheasant hunt since I had almost given up hunting them locally. We met at his home and headed east on I-10, crossed the Colorado River into Arizona, and went south to Mexico and the city of San Luis Rio Colorado.

It was a guided hunt, and we had a great room and food facilities at a local hotel. The first morning I was a bit surprised when we took the field and all six members of our hunting party were set up as "blockers."

I was standing there, camera in hand wondering when the "walkers" would show up, and I heard a strange sound coming from the other end of the field. I couldn't quite make out what I was hearing, but it got louder and louder as I stood there. Finally, I saw what looked like a half-dozen men walking toward me. Each man was shaking two one-gallon plastic jugs filled with rocks. What a racket. A very clever way to scare the birds into running down the field.

We had some really great shooting when as many as 30 to 40 birds flew out of the rows. The guys were bagging roosters only, but it didn't take long to get their limits that were set by the guide.

After three days of terrific gunning, we headed home. Mexico is a great place to hunt since there are few local hunters and more than enough milo and cotton fields to produce good shooting. I highly recommend it.

This isn't the first time the Kern has had that honor. I recall a number of times in the past when they were on top. 2,389 hunters bagged 7,662 waterfowl to obtain their No. 1 status. I have often thought it strange that some of the larger refuges to the north that house hundreds of thousands more birds than we do, end up with lower averages. But, that's the way it is. Again, congratulations guys. Well done.