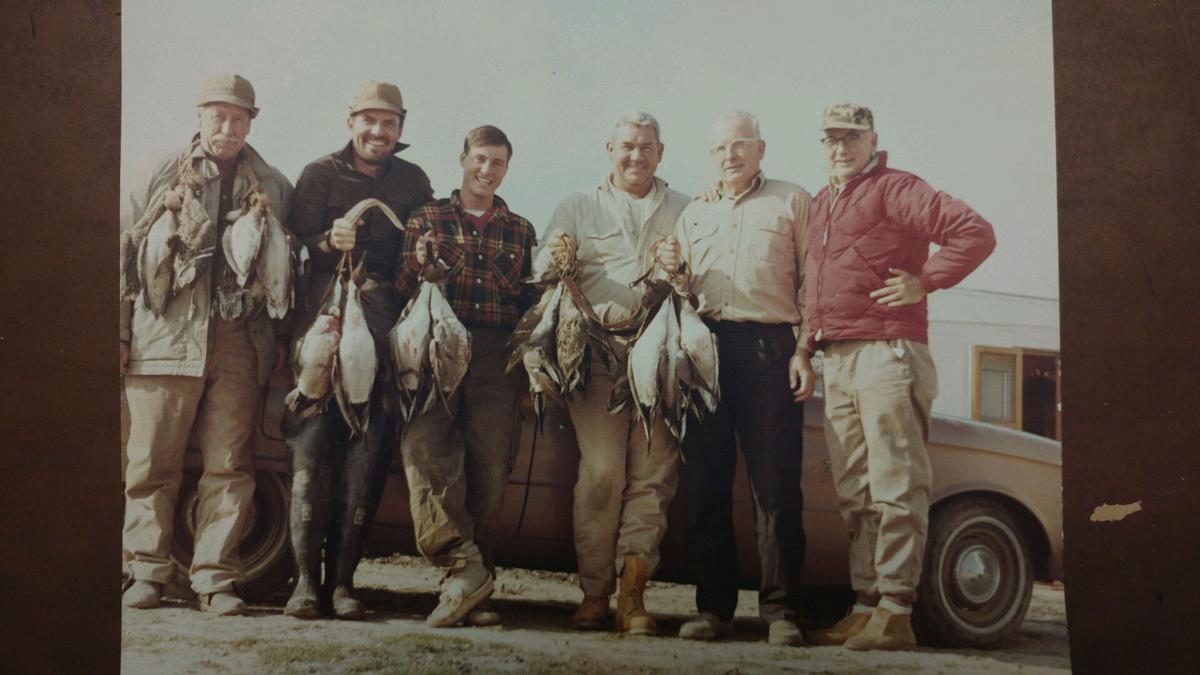 Waterfowlers at the Gilbreath Bros. duck club are shown in the 1960s, including at far left, Golden Age actor Frank Ferguson, who had 320 film and TV credits. 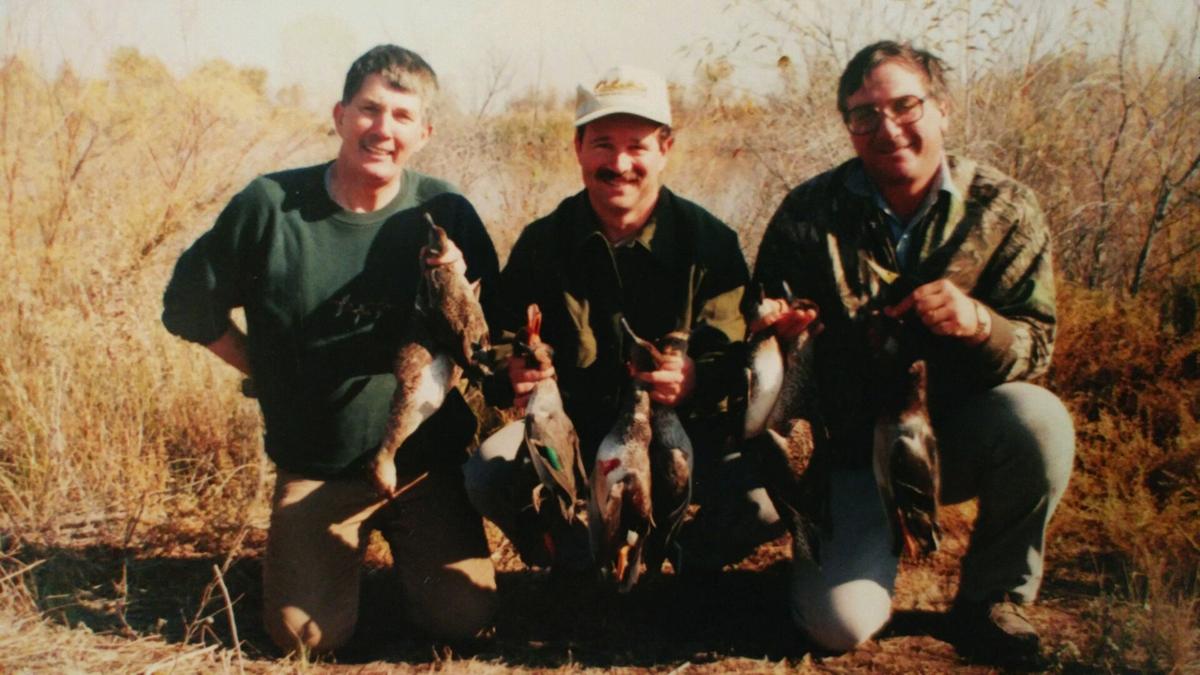 Shown, from left, are Ken Barnes, Rocky Lacertoso and Steve Merlo after a nice morning shoot on the Goose Lake Slough some years ago. 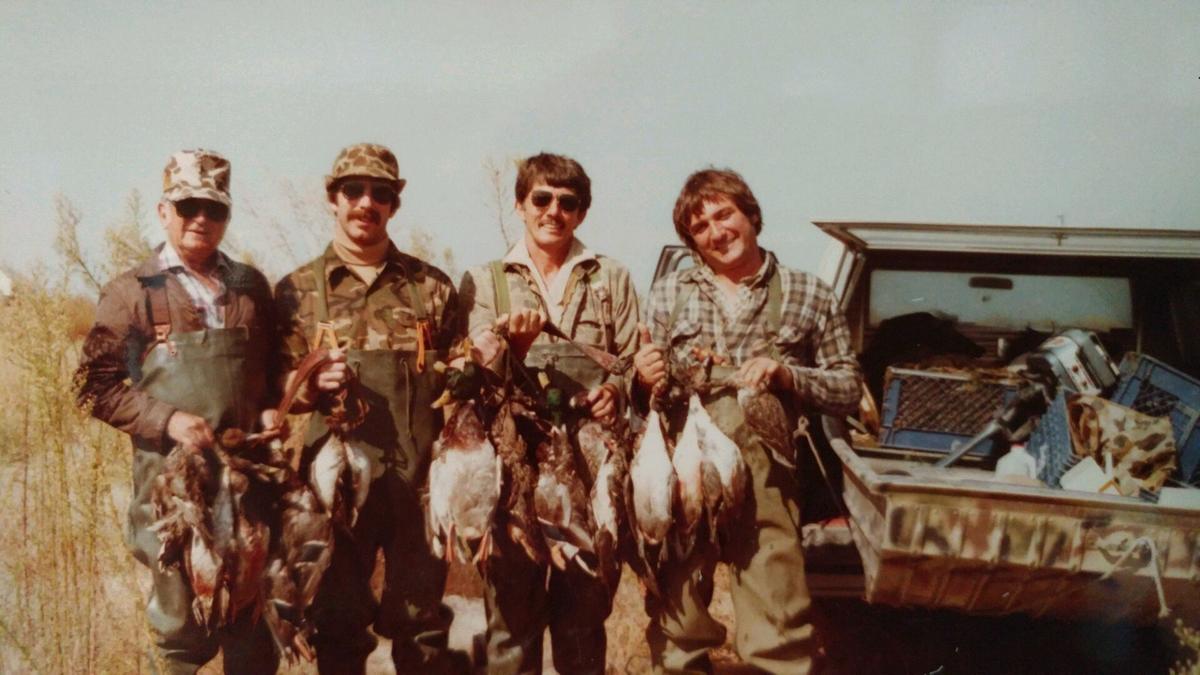 Pictured, from left, are Dino Fanucchi, Mike Griffith, Ken Barnes and Steve Merlo after a hunt in the Tulare Lake Basin, "back in the day."

Waterfowlers at the Gilbreath Bros. duck club are shown in the 1960s, including at far left, Golden Age actor Frank Ferguson, who had 320 film and TV credits.

Shown, from left, are Ken Barnes, Rocky Lacertoso and Steve Merlo after a nice morning shoot on the Goose Lake Slough some years ago.

Pictured, from left, are Dino Fanucchi, Mike Griffith, Ken Barnes and Steve Merlo after a hunt in the Tulare Lake Basin, "back in the day."

I really can't say how the upcoming water fowl season is going to unfold.

But for me, any improvement from last year will make me as happy as I have been for a long time. It's hard to put into words what a dismal season I had last year.

It was the worst in 67 years of waterfowling in this area. There were mornings I would not see a flock of birds in the air for up to three hours after shooting time. Not one! And, I am hunting an area only a mile from the Kern Wildlife Refuge.

Hard to imagine since the Kern Refuge had a fairly normal year, and I believe the best average in the state.

I have spoken to a lot of other hunters who shoot private clubs in this end of the valley, and most of them say their take was up to 50 percent less than normal years of the past. My friend, Duffy Sill, hunts one of the most prominent and historic clubs around ... the El Cinco. He said it was the first time he could remember only twice bagging a full limit of birds on a given day for the entire season.

Instead, it was an average of three to four. And, with the drought throughout the state this past winter, there was a shortage of water in some areas of California where nearly 85 percent of local ducks breed. Not good news. We will see.

AVIAN BOTULISM OUTBREAK: There was a massive outbreak of botulism this summer in the Tule Lake-Klamath Falls region. Botulism is caused by a soil bacterium and causes paralysis and death in birds.

Birds can become infected after ingesting decaying organic matter or live invertebrates that have been infected with the toxin. When birds eat the invertebrates, they get a concentrated package of toxin. A bird-to-bird cycle can also exist where maggots feeding on dead birds can concentrate the toxin and can then be eaten by and poison other birds. In waterfowl, the paralysis causes the the birds to drown because they cannot keep their heads upright.

At last estimate, 40,000 birds had died in the Lower Klamath area through September, and thousands more were at an emergency "duck hospital" operated by staff from Bird Ally X, California Waterfowl Association and U.S. Fish and Wildlife Service.

I have a very personal understanding of botulism and its effects. There have been a number of small outbreaks here in the valley over the past decades, but nothing comes close to the one in 1967.

According to sources I found, over 50,000 waterfowl died that year with the outbreak in the Tulare Lake Basin. This included a small potion of birds on the Kern National Wildlife Refuge. I remember the request from the Refuge for the public's help in retrieving dead birds. So, my cousin Jimmy Barnes, and I, went onto the Refuge one day and towed a boat by hand throughout the marsh and waterways. We picked up just over 200 dead birds, the most of which were pintail ducks. I'll never forgot the sight of all those beautiful birds stacked atop other piles that had been brought in. I can only hope and pray that none of us ever have to relive that sight again.

SOUTHERN SAN JOAQUIN VALLEY ZONE SEASON & LIMITS: Ducks and Geese: Oct. 24 through Jan. 31. Scaup: Nov. 7 through Jan. 31. Special Youth Hunt Days: Feb. 6 and 7. New Special Veteran Hunt Days: Feb. 13 and 14. Limits: Daily bag limit of seven, of which may contain seven mallards, of which only two can be female; one Pintail; two canvasback; two redheads; two scaup. Geese: Daily bag limit of 30, of which may include up to 20 white geese and up to ten dark geese.