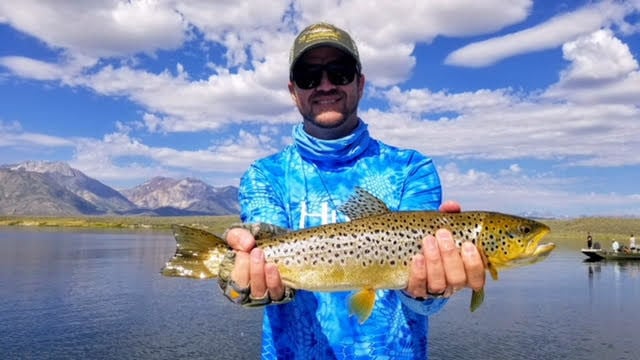 Mark Barnes is shown with a beautiful Brown trout taken at Crowley Lake this past summer while fly fishing. 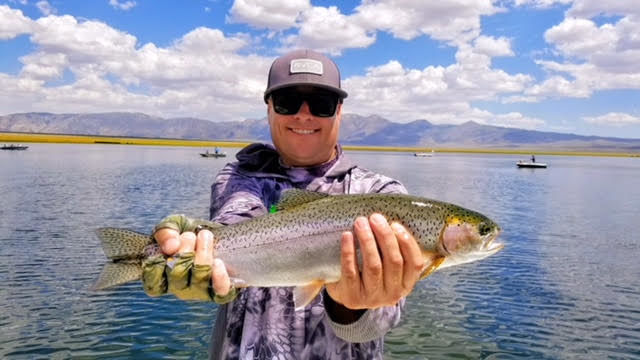 Cutthroat trout, like this one Jimmy Clark is holding, are a typical catch while fishing the eastern Sierra's lakes.

Mark Barnes is shown with a beautiful Brown trout taken at Crowley Lake this past summer while fly fishing.

Cutthroat trout, like this one Jimmy Clark is holding, are a typical catch while fishing the eastern Sierra's lakes.

Readers may recall in my last column about fly fishing, I mentioned that my son Mark has started to take an interest in fishing.

In fact, I was going to include some comments from him about a trip he took this summer to the Mammoth Lakes area for angling.

I couldn't do it though, because the column would have been too long since I had already included remarks from my old friend Joe Covello. Joe's words about fly fishing using a float tube were very interesting, and I want to thank him again for helping out. So, today we are going to let Mark tell his story about his trip to the Eastern Sierra.

"Over the last several years, mainly since becoming a father of two boys, a renewed interest in taking up fishing as a regular activity developed. Bass occasionally, and crappie here and there, but trout fishing really became a focus.

After some successful trout fishing trips, this grew into a desire to take it a step further and try my hand at fly fishing. It was here where my good friend Jimmy Clark and I decided to go after some large trout.

We had heard about the great trout fishing up and around the Mammoth area, and began planning a trip to land some of these monsters. Jimmy came across an outfitter in the Mammoth Lakes basin...Sierra Drifters. They specialized in Crowley Lake fly fishing and after looking at some pictures of their successful trips, we decided to book one.

That morning we showed up ready to meet our guide, Doug. He met us and began to explain what the game plan was going to be that day. There was a midge hatch taking place and he thought we would have some good luck in store. Heading out, we began a bee-line to an area of the lake near an inlet of water that other fisherman knew about because there were a few early birds already in on the action when we arrived.

Almost immediately, we began to see fish rising and eagerly taking their meals. Doug wasted no time in prepping our fly rods with the appropriate midge and floater, and explained the idiosyncrasies of fly casting from a boat with three people in it. It didn't take long, and Jimmy had a strike.

After a good fight he pulled up a nice Cutthroat trout. A good start to the day. After a few more near catches, we lost a few during the fight.

Doug decided to take us to another part of the lake. In this new area we were in about three feet of water and the activity from the fish seemed even better.

Soon, I was on one, and a battle ensued. Alas, I hauled in a beautiful German Brown. We were even, one to one. From this point the day was filled with excitement as Jimmy and I took turns reeling in fish and landing them, as well as losing several mid-battle.

Fish were jumping out of the water and shaking their heads vigorously attempting to free the hook, and many were able to do so. One even broke Jimmy's hook in half. What a monster. After a gorgeous day in a setting out of a postcard, we hand landed three species — Cutthroat, German Brown, and Rainbow trout.

The longest was 23 inches and the heaviest weighed 5 pounds. Jimmy and I split these records. A successful fly fishing adventure indeed."

Thanks Mark, for a great story. It's beginning to sound like I might have to start doing some new video in the future beside waterfowl hunts. Nothing better than spending time with your family in the outdoors. And, you're never too old.

One last note: After my last fishing column, I received a message from a company called Pure Brand Baits. They make an environmentally friendly, all natural trough dough bait (similar to PowerBait), but do not use toxins or petroleum products. It comes in a pouch that fits in your pocket and is reusable and recyclable. If you are concerned about the environment, check them out at https://www.purebrandbaits.com/.