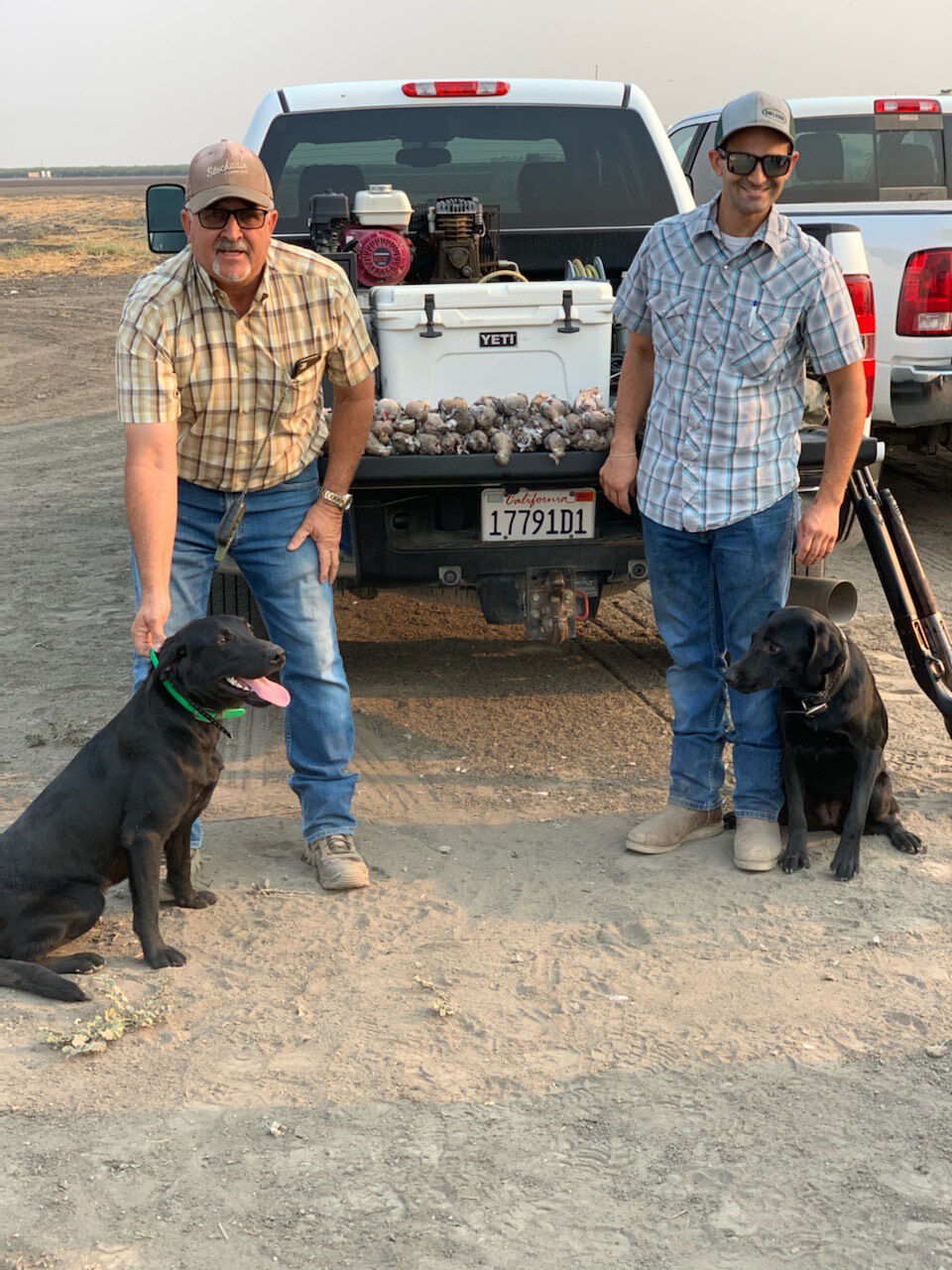 Frank Buoni, left, is shown with son Dominic, and retrievers Gunner and Remi, following a family dove hunt during this past week of dove season. 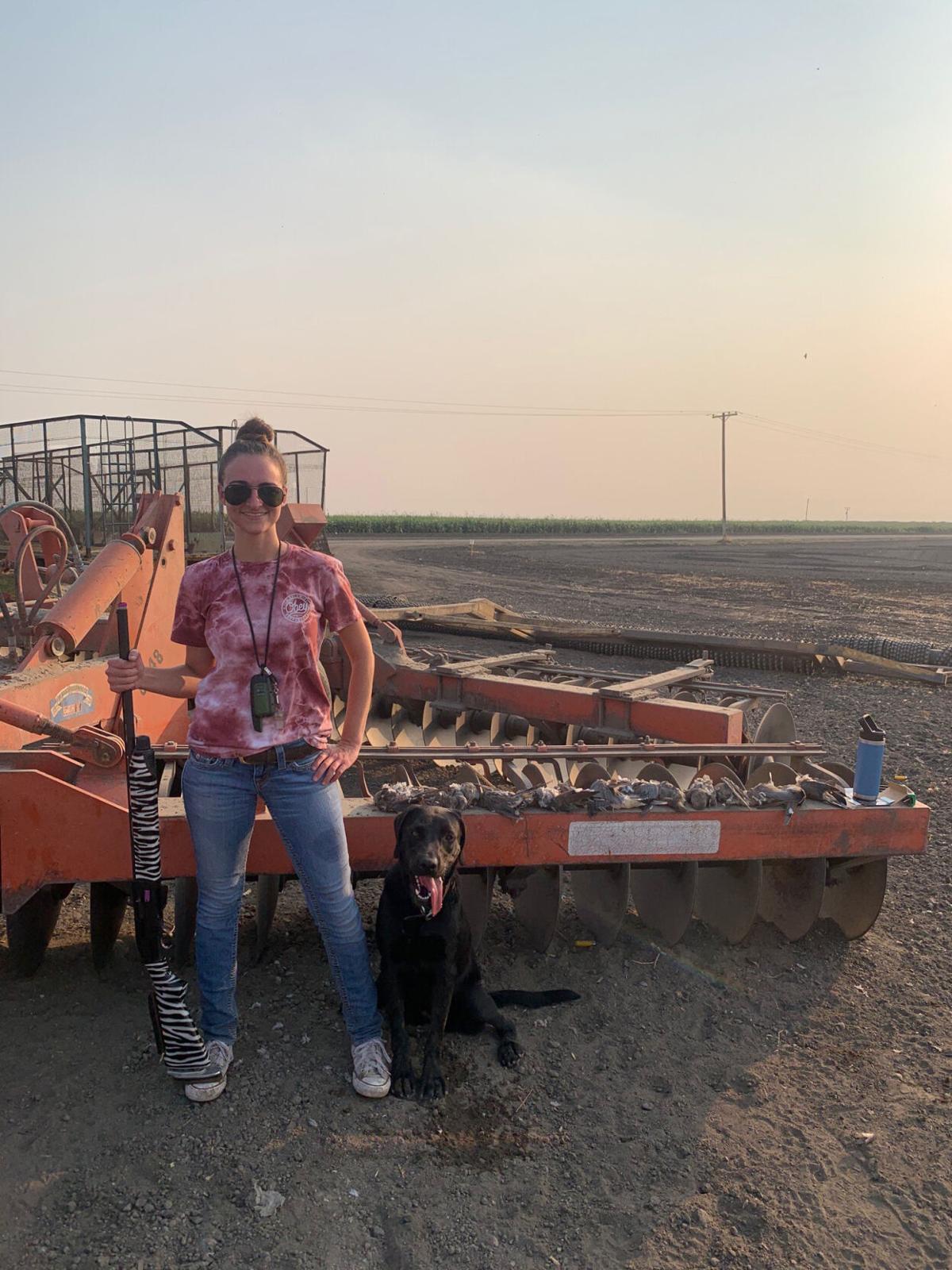 Being a champion skeet shooter just makes your wing shooting easier, as pictured here by Jenna Buoni after a recent hunt. 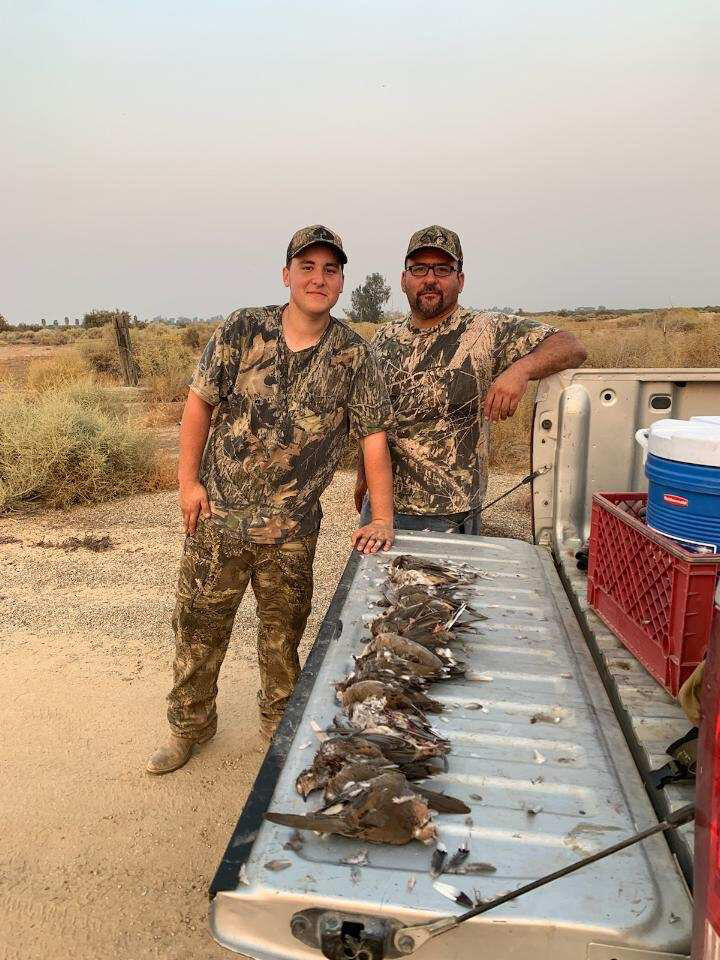 Pictured are Michael Merlo, right, with son Joe, after a terrific afternoon dove hunt on the opening day of season.

Frank Buoni, left, is shown with son Dominic, and retrievers Gunner and Remi, following a family dove hunt during this past week of dove season.

Being a champion skeet shooter just makes your wing shooting easier, as pictured here by Jenna Buoni after a recent hunt.

Pictured are Michael Merlo, right, with son Joe, after a terrific afternoon dove hunt on the opening day of season.

September 1st. The opening day of dove season kicked off five straight months of activity for hunters across the state, starting with upland game, and then waterfowl.

I took the field for my 68th time this year. I was hoping it would be with two of my sons and two grandsons, but it was not to be. Steve was called to work by the railroad, and both grandkids are now in school.

So, it was just me and my son Mark. This was the first time in many years that I went into the field with a gun in my hands. I usually just take my video camera and film the family having fun.

I totally forgot just how fast doves can fly at first light and about ten feet off the ground. Some were "eating my lunch," so to speak. It's hard to believe that Steve Merlo and I used to bag our limits using .410 bore, pump action guns back in the day.

But, I was way younger then, and my eyesight was much better than it is today. I recently discovered that I have a problem with my right eye. It is making me see slightly double, small figures at anything past 100 yards with both eyes open. No excuse though for missing a dove at 20 yards. And, not getting off the stool to shoot didn't help, either. It is all just part of getting older. I fill very blessed to be able to still get out there at my age.

Mark was asking me about some of my past opening day hunts, and said he had heard a story about a classic one with Leroy Fontana, but did not know the details. I replied it was one of the all time best. Many years ago Leroy and I were with a group out near Arvin. We walked together down the line facing an orchard.

Leroy stopped and set up his stool, and I continued on down for another 40 yards. This gave us the needed zone we each had to have for good shooting. Twenty yards to the right and 20 to the left. Just as I sat down, I noticed movement to the right side of me, and a gentleman put his chair down about 10 to 15 yards away from me.

I started to call him out about being in my space, but decided to have some fun instead. I yelled out to Fontana, "Hey Leroy, what kind of gun did you say this was?" He replied, "It's a Winchester pump action." I said, "OK thanks."

Two minutes later I yelled again, "How do I load it?" Not sure how he knew what to say, but Leroy answered back, "I showed you how at the car, remember." It was about ten minutes 'till shooting time, and the red sky was dawning over the Tehachapi Mountains to the east. I pointed the gun into the ground about five yards in front of me, dropped a .410 shell in and closed the action. I then pulled the trigger. Boom!! I hollered to Fontana, "Leroy ... Leroy, it went off. It went off."

I glanced to my right just as the man who had been sitting there quickly raised himself, grabbed his gun, stool and bag, and headed off in the opposite direction. I will admit that it was not one of my proudest moments, but at the time it served its purpose, and Leroy and I laughed about it for many years thereafter.

In closing, I would just like to say that I did not realize there were so many hunters who cannot read well. When a sign says "No Trespassing or No Hunting Without Permission", it means exactly that and nothing else.

My property was overrun with trespassers this year, as were the guys above and below me. And, most of you left your empty shell casings all over the ground. Please! There are many areas to hunt that are not posted. Just do a little scouting before opening and you can find property that does not require permission.

ONE FINAL NOTE: Kern Shooting Sports is continuing their NRA Junior and Women's Rifle Program. The sign ups will be on Sept. 16. People can contact George Stilwill at 589-2348 for further information. We will adhere to COVID-19 regulations.

My point is that NOBODY reads your lengthy cut-and-paste posts, YORKIES!

A 3rd grader can do what you do, yet you continue to repeat it; thinking it makes you look smart- pro tip: it doesn't...

Prove me wrong- explain to everyone here what you just copied and pasted and how it relates to anything pertinent in this story.

man with a weapon....."my eyesight was much better than it is today"... that is a problem........someone in the family might want to also hide the gentleman's car keys while their at it

Yeah hunting is immoral unless your starving. 64% of the earth's wild life has disappeared in the last 40 years. This isn't sports.

Wrong again, Dweeb. You need to keep posting "facts" from your Facebook feed.

From The Atlantic (so you can't accuse me of using some right-wing periodical):

"Ultimately, they found that from 1970 to 2014, the size of vertebrate populations has declined by 60 percent on average. That is absolutely not the same as saying that humans have culled 60 percent of animals—a distinction that the report’s technical supplement explicitly states."

Sorry, you can't blame hunters for the declining numbers...