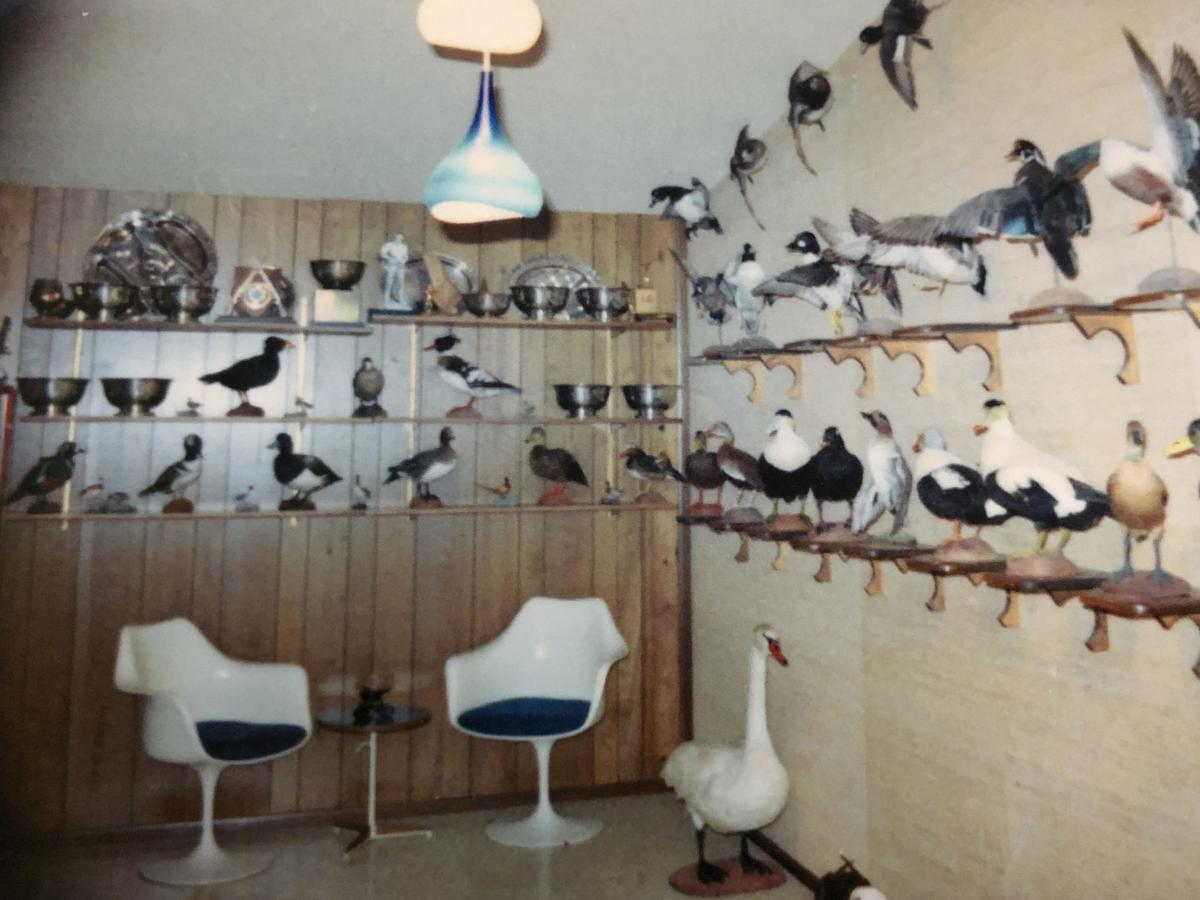 Pictured is trophy/game room that columnist Ken Barnes owned in the 1960s, and showing a portion of his collection of taxidermy ducks. 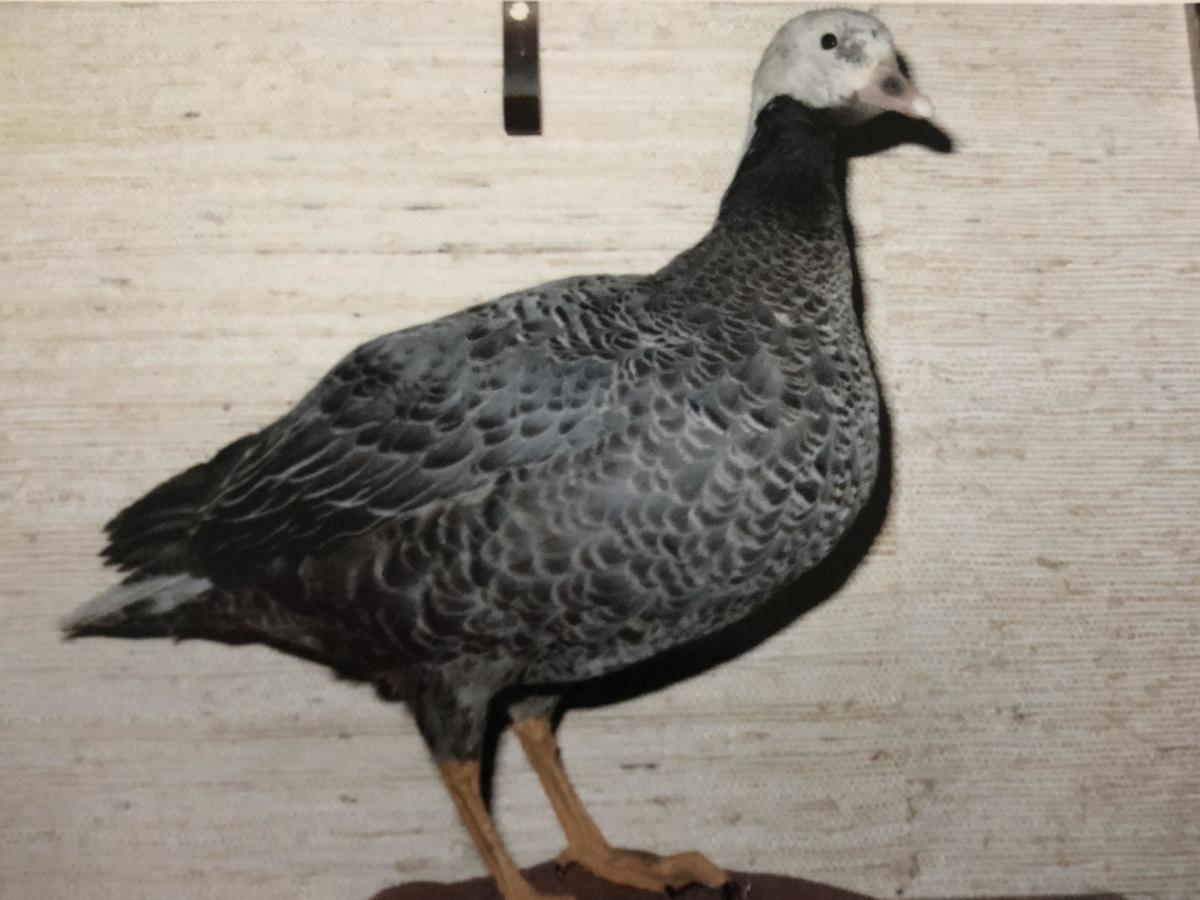 Shown is taxidermy mount of very rare emperor goose that was bagged by Ken Barnes in 1969 at Morro Bay.

Pictured is trophy/game room that columnist Ken Barnes owned in the 1960s, and showing a portion of his collection of taxidermy ducks.

Shown is taxidermy mount of very rare emperor goose that was bagged by Ken Barnes in 1969 at Morro Bay.

Some of you older readers may remember me when I worked for Vince Clerou running the gun department at Clerou's sporting goods store on downtown 18th street.

That was in the mid-to-late 1970s. If you came into the store during the early part of that decade, you probably noticed the extensive collection of taxidermy, mounted ducks that were on the ceiling of the counter in the gun department. These all belonged to me, and I had brought them down to the shop around 1969 or1970.

They had originally been in a home I owned over on the east side of town. I had put the collection together all through the 1960s, and at the time it was one of the most complete private collections in the U.S. Every species of ducks found in North America were included, with the exception of a pair of Eider ducks that were found in Alaska.

I had personally bagged all but three or four of them on various hunting trips around the country over the years, and the ones I had not taken myself were shipped to me, dead and frozen, by hunting friends of mine. These included the rare New Mexican and Florida ducks.

When I first started the collection, I was working with a great taxidermist locally by the name of Ray Oglesby. He and his father owned a truck company, and Ray did the taxidermy on the side.

I made a deal with Ray that I would paint all the ducks that he mounted for other clients if he would do mine for free. He agreed, and every two or three weeks I would go to his shop in his garage in Oildale and work on these birds.

I became very proficient at getting the exact colors needed for the bills and feet using oil paints that I mixed. A few of my birds were in flying position, but most were just on stands.

I had them on display at my home in a den that I had built by enclosing the patio. It also housed a few of my shooting trophies.

In 1973, I attended a skeet shoot in Seattle, Wash. that was sponsored by the Eddie Bauer Company. One of the officers of the company had heard about my collection, and asked if I would like to sell it to them so they could put it on display at the entrance of their corporate office.

I guess the time was right, because I had been thinking about buying a condominium in the southwest, and what they offered me would be perfect for a down payment on the loan. I agreed, so my friend, local artist Bill Davis, and I loaded all the birds into the trunk and back seat of a 1972 Cadillac I was driving, and headed to Washington to deliver them. Made it there just fine, and managed to get in a great duck shoot, also.

One final story about the collection. On the last day of duck season in 1969, I was hunting Morro Bay for Black Brant with my friend David Rogers.

While waiting for the tide to change, we took a quick drive out onto Morro Rock just to see the waves. On the way back, as we were driving along the rocky road next to the shoreline at the entrance of the bay, I noticed a strange looking bird swimming just next to the shore and only about 10 yards from the truck as I was looking out the right side window. I thought it looked like some type of goose, but something I had never seen before.

I told David to stop the truck, and I got out and looked back some 50 yards with binoculars. I couldn't believe it. I thought I was seeing a rare Emperor goose from Alaska, which rarely, if ever, are seen this far south. I started walking toward it and it took flight.

As soon as I saw its gold feet I knew I was right. I let out a yell, and told David we had to grab the boat and get back here quickly.

The bird flew across the channel and lit on the tip of sand dunes. We drove to the dock, jumped in the boat, and in 10 minutes were bearing down on the goose as it waded in shallow water on the dunes.

I was in front of the boat, and I told David not to slow down when it took flight, so I would not be jolted. It took off at about 50 yards, and we closed ground. I got off two quick shots, and down it went. When I retrieved it, there was a lot of screaming and yelling. Talk about happy.

A game warden friend of mine told me a few years later that it was only the second Emperor bagged in California during the last 10 years.

And a real funny ending to all this. About a week later, my friend Ron Hurlbert called me from Morro Bay. He said there was an article in the paper that week that reported that a bird watcher from the Audubon society reported "seeing a rare Emperor goose on the bay and for everyone to be on the lookout for it."

I just smiled, and thanked God for letting me be the second person to see it.