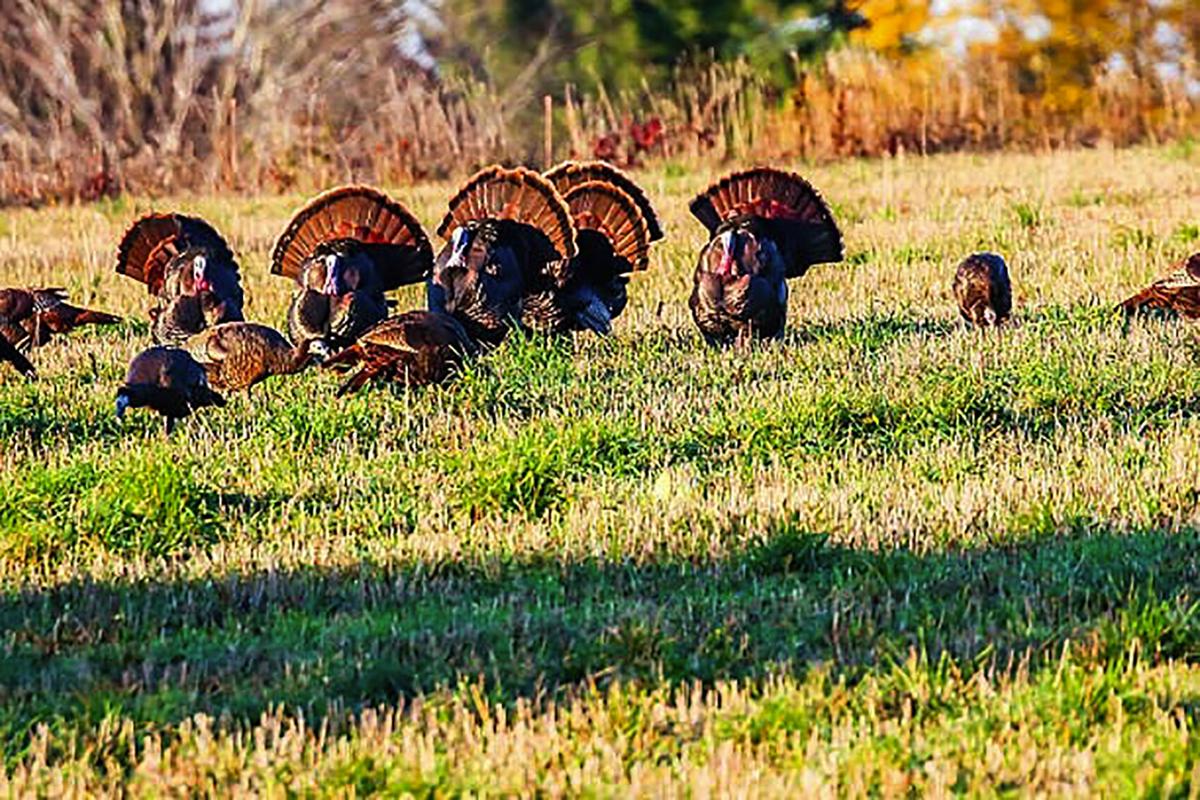 Pictured is a beautiful flock of turkeys feeding, with a large number of 'tom' male gobblers in full strut trying to attract a mate. 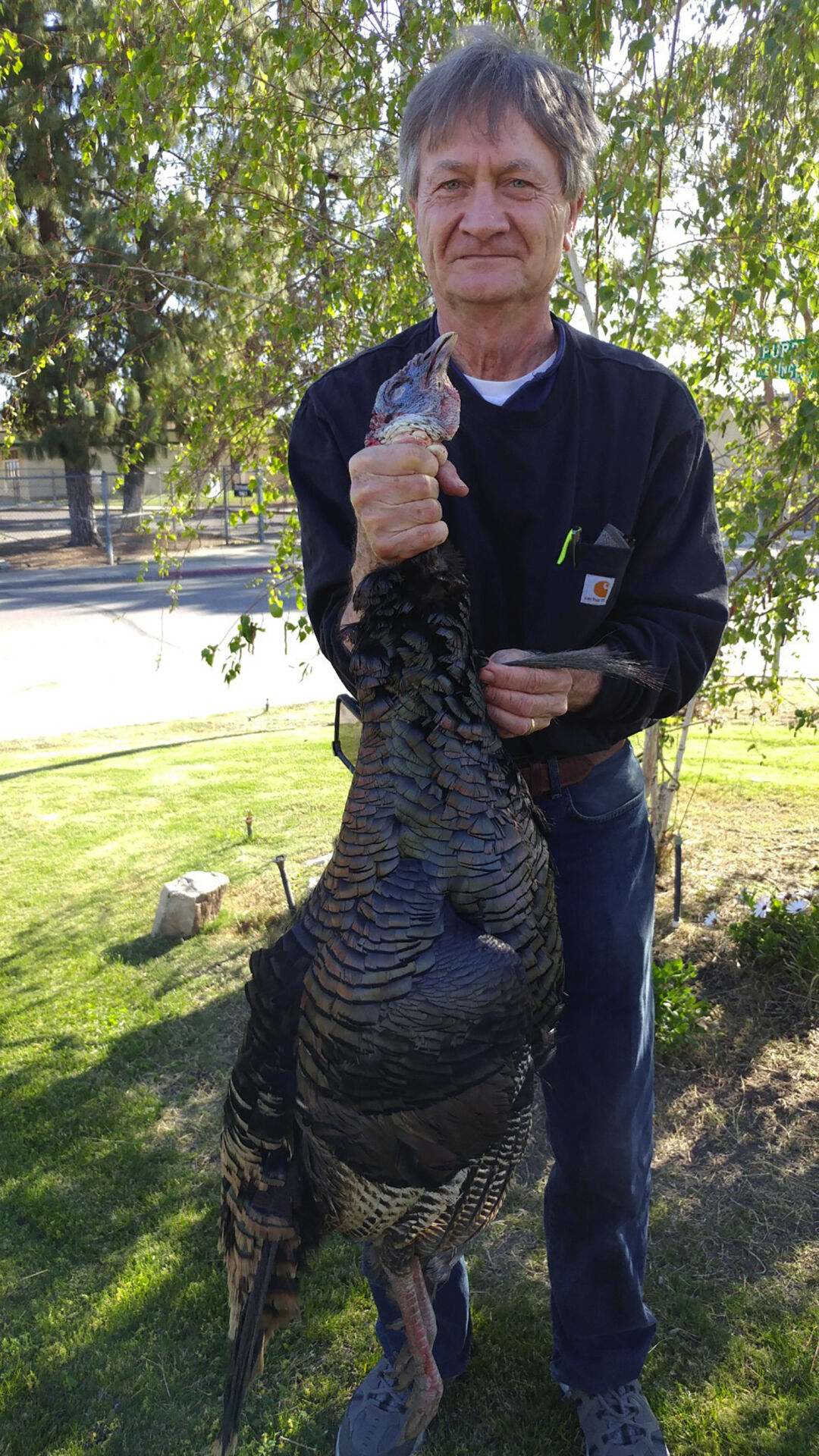 Pictured is a beautiful flock of turkeys feeding, with a large number of 'tom' male gobblers in full strut trying to attract a mate.

I am pretty sure that most of you readers know that my favorite hunting activity in the field is waterfowl. If I had to list birds in the order of preference that I pursue it would be the following. . . ducks, geese, pheasant, dove, chukkar and quail.

I hunted wild pigeons one time long ago, but that did not amount to much. You might notice that there is one bird missing from the list that is virtually found all over the state of California, and has two seasons available for hunting.

The magnificent wild turkey. To be honest, I really did not realize that we had turkeys available in the state until some 35 or 40 years ago. I just thought they were found in most all of the states east of the Mississippi River.

None of my friends that I hunted with during the 50s and 60s ever mentioned them being available here in our state.

After some research, I discovered that they are found in 49 of 50 states, with Alaska being the only exclusion.

I first got notice of them about 30 years ago when my longtime friend and hunting partner, Ron Hurlbert, started talking about hunting a few when he began living in the foothills just west of Paso Robles. And shortly after that, my friend Steve Newbrough starting bagging some in the same area.

The spring turkey season opened this past weekend, but I was not able to make a hunt. Steve Newbrough was hoping to get permission from the owner of a ranch that we used to hunt on, but found out that they leased the hunting rights to a licensed guide in the area. And, Hurlbert no longer owns the property he used to hunt on, so that was out also.

There are turkeys to be found in the eastern Sierra mountains also, as evidenced by the ones that my old pal Steve Merlo used to bag when hunting in the Glenville area of Kern County.

I remember three very distinct hunts that I filmed on the coast range. The first was with Newbrough and another friend, Adam Stull. We built a very nice stakes and netting blind that was covered with brush, and set out two nice decoys.

The ones used back in those days are not even close to the realism of the ones you can purchase today, which look like live birds with all the detail on them. One big advantage we had was the calling ability of Steve. He gives the most amazing series of clucks with his mouth call that the hens do, as well as an uncanny screech sound going up and down that the tom turkeys are listening for. It is the mating season, and the big gobblers come into the spread with those beautiful tail feathers spread wide, hoping to attract a mate.

Sometime you will get more than one, and they will attack each other.

If you have a male decoy out, they even pounce on those. It wasn't long before we had three big 'tom' turkeys coming into our site. It is just pure joy sitting there and watching them strut no more than 20 yards away, and to be honest, shooting them can sometimes feel bad because they are such an easy target. But then, you start thinking about how good they are going to be as table fare, and you forget that idea. Newbrough bagged the bird with the longest beard, which was about nine inches.

I had the privilege of being with Steve Merlo when he took his first gobbler. It was on the same ranch, and boy, was he one happy hunter. I got it all on tape, too. The bird he bagged was extremely wary, and just never got closer than 50 yards from our set-up. Finally, Steve decided to try the long shot any way, and had at it. You could tell he hit the bird, but it took off running.

Merlo jumped out of the blind and took pursuit, and found it less than 100 yards away. Nothing but a big smile walking back to the blind. One added note about that extremely long shot Steve took. There is ammo on the market today that can easily reach and down a turkey at 80 yards. I showed a pattern of a shot in a column a while back.

While I am on the subject of video taping these hunts, I must mention one really odd event. We were building a blind one morning, when suddenly over a small rise, a group of about 20 birds came walking right toward us. Most of them were hens, with a few "jakes" mixed in. Jakes are young gobblers with very short beards, and are rarely shot unless you were desperate.

I immediately dropped to the ground and nuzzled up against a large tree stump. I just froze, and then turned my camera on and pointed it out to the side so I could get a video of the birds strolling through. Well, one of the jakes just walked right up next to me in front of the camera. He was no more than two feet from the lens, and I just sat there and stared at him. He stared back, shook his feathers slightly, and then just walked away like I was never there.

One last hunt I might mention was when we had a guest with us from the Kern Wildlife Refuge. It was the manager, Tom Charmley. He told Ron that he had never hunted turkeys and would really like to try and bag one, so we had him join us for a shoot on Ron's property. It could not have gone better, as we called in a huge tom from over a quarter mile away.

It was on very sparse ground, and you could see him running toward us. Every time Steve called, he would stop and gobble loudly. It made for a great film. He came within 10 yards of the blind, and we just all sat there and watched him talk and strut for about five minutes before Charmley decided to take him down with a clean head shot.

If you have never hunted turkeys, you should try and give it a go. The hard part is finding private property to set up on.

And, blinds are not necessary. I'm sure you've seen shows of hunters in full cammo and make-up just sitting on the ground and still getting easy shots. But the thrill is not the kill. It's just the watch. Awesome.