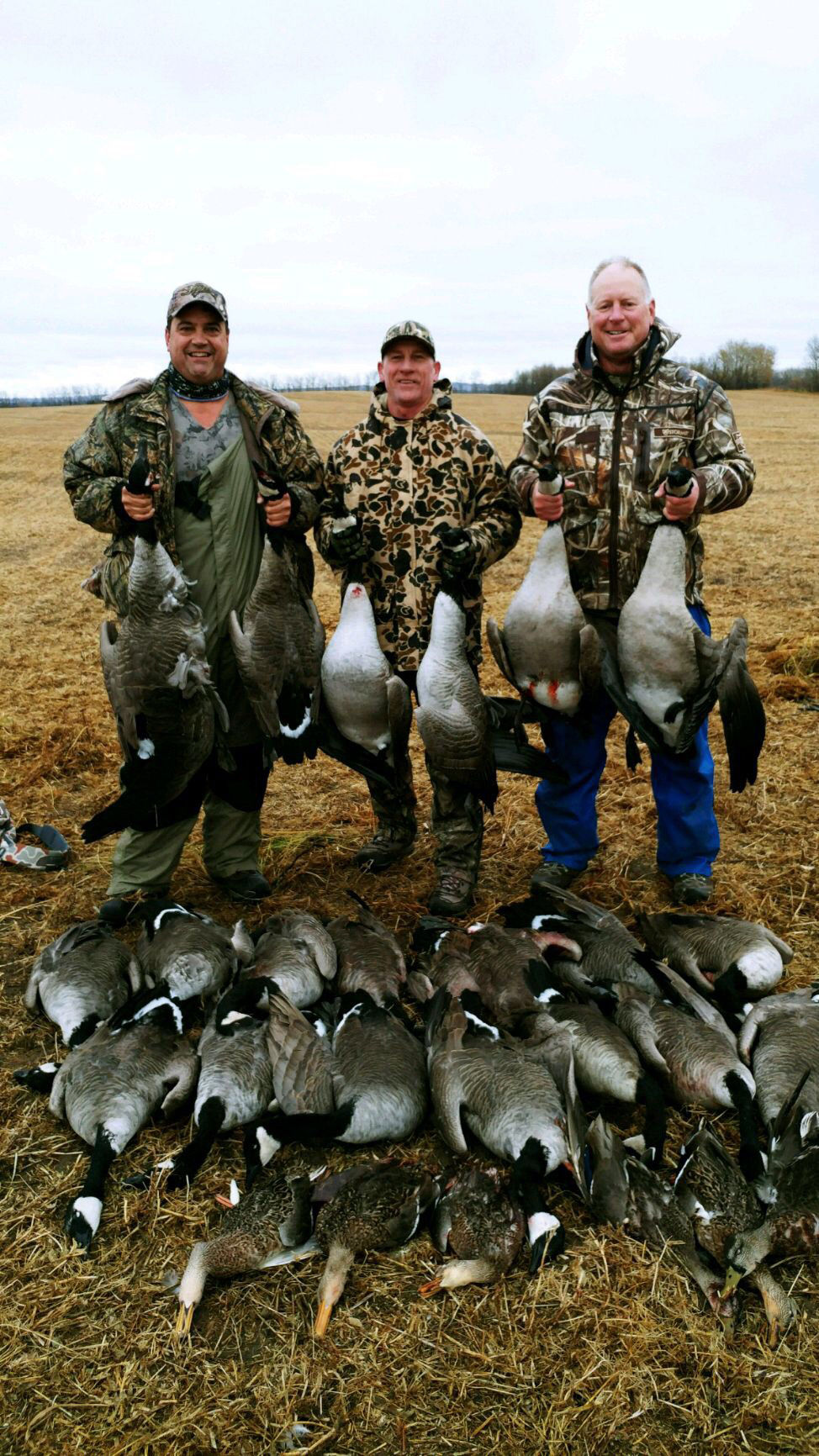 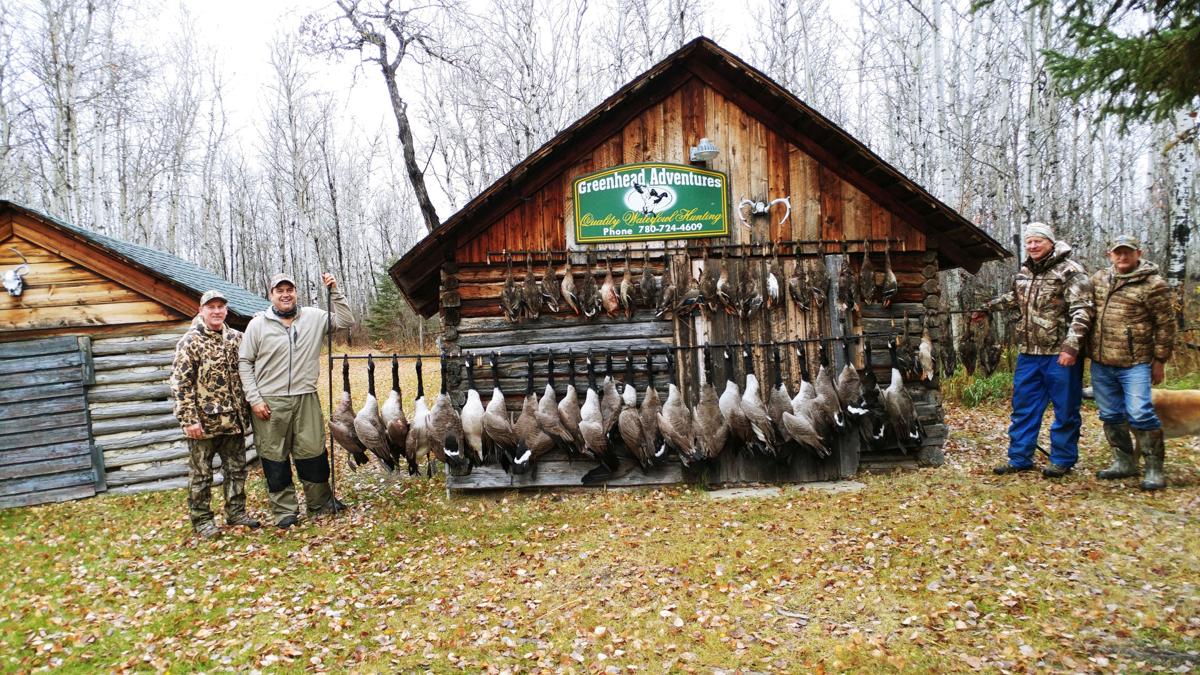 Late last winter I received a call from my old friend and hunting partner, Ron Hurlbert. He said he had spoken to a guy he knew who had bagged some giant Canada geese that past season up in Alberta.

He wondered if I was still chasing these "bird of birds," and if I knew someone that might want to go after them again.

I immediately thought about a past hunting companion, Jake Brower. You may recall that name because I did a column about him, his dad, and his brother some months ago with a photo of them holding two banded geese. I contacted Jake, and he in turn reached out to the guide in Alberta. Great timing because the outfitter only had one slot left for the 2019 season.

Jake booked the time available, and we all just started getting giddy thinking about the prospects of bagging a "Branta canadensis maxima."

Fast forward to last week. I met Jake and two of his friends, Mark Fredrick and Mike Johnston, at LAX for a quick non-stop flight to Edmonton, Alberta. After an easy two hour drive we arrived in the town of St. Paul, and were met by Denis Gauvreau, the owner of Greenhead Adventures guide service. Denis is in his 35th year of taking care of waterfowlers, so we knew we were in good hands. He led us to his home situated outside of town in the woods.

It was in impressive two-story, log cabin style abode with a huge basement with accommodations for the hunters including two bedrooms for six, bath, large living room, laundry room, and small kitchen area. Various taxidermy adorned the room, such as deer, game birds, lynx, bear, wolf, and half a musk ox.

We were met with ugly weather the first morning, as there was a light, misty rain falling while we were setting out close to 150 full body goose decoys. Thirty minutes later it turned into light snow, and stayed that way all morning. Our group was the last Denis would be taking out for the season that began the first of September.

He said the birds were spooky and skiddish, so we would be hunting out of lay out blinds. I dislike these for filming because it is very hard to handle the camera and try to stay unseen at the same time. We had large numbers of birds work the decoys, but mostly just off to the sides of the spread.

The decoys being covered in snow probably did not help either. I finally just quit filming and covered myself in the blind, as I was getting wet from the melting snow. The guys managed to bag a few birds though, even with the tough conditions.

That afternoon we had a great duck hunt in a pea field. I managed to hide right behind the shooters in a dry waterhole that was covered with tall grass and cat tails. Again, I was in a lay out blind, but it was easy to cover myself with the weeds. Got some terrific footage.

The second morning we set up in another large pea field. No cover for me, so I went about 120 yards away from the spread and sat down at the edge of a tree line that ran along side the field. I managed some great long range action, only because of my good telephoto lens on my camera. The boys took down three limits of nice geese.

Jake thought they might have bagged three Giant geese, but I said I thought they were just large Common Canada that weighed in the 15 pound range. They did not have the distinctive coloration of the Giants such as extra long neck, white ring around the collar, and white forehead patch, and weights from 15 to 20 pounds.

Overall, it was a great trip for all of us. I would just like to thank Denis and his wife Claire for letting me tag along and film. Claire is one of the best cooks I have met during all the years I have filmed in Canada. Breakfast after each morning hunt, including eggs, bacon, sausage, potatoes, toast and juice. And her dinners included an amazing lasagna, roast beef, and ham with a great assortment of side dishes and salads.

If you are looking for a first class hunt in Canada, then you should consider "Googling" Denis at Greenhead Adventures. You will not be disappointed. But don't wait, because he fills up dates available quickly.

ONE FINAL NOTE: Morning Star Fresh Food Ministry will be holding their annual pheasant hunt near Shafter on Nov. 9th. Proceeds go to feeding the bodies of needy families with fresh nutritious food and their souls with Jesus Christ. Call Bret Sill at 661-900-8469.

Not sure what’s worse, a person paid to write a column about humans traveling to shoot animals that fly (yes, know you took a camera to watch the actual killers), or reading an add-on about the hungry referring to Jesus as soul food. Inyokern daily news? Maybe but cringe worthy in the most ashamed way for what Kern hopes to become.