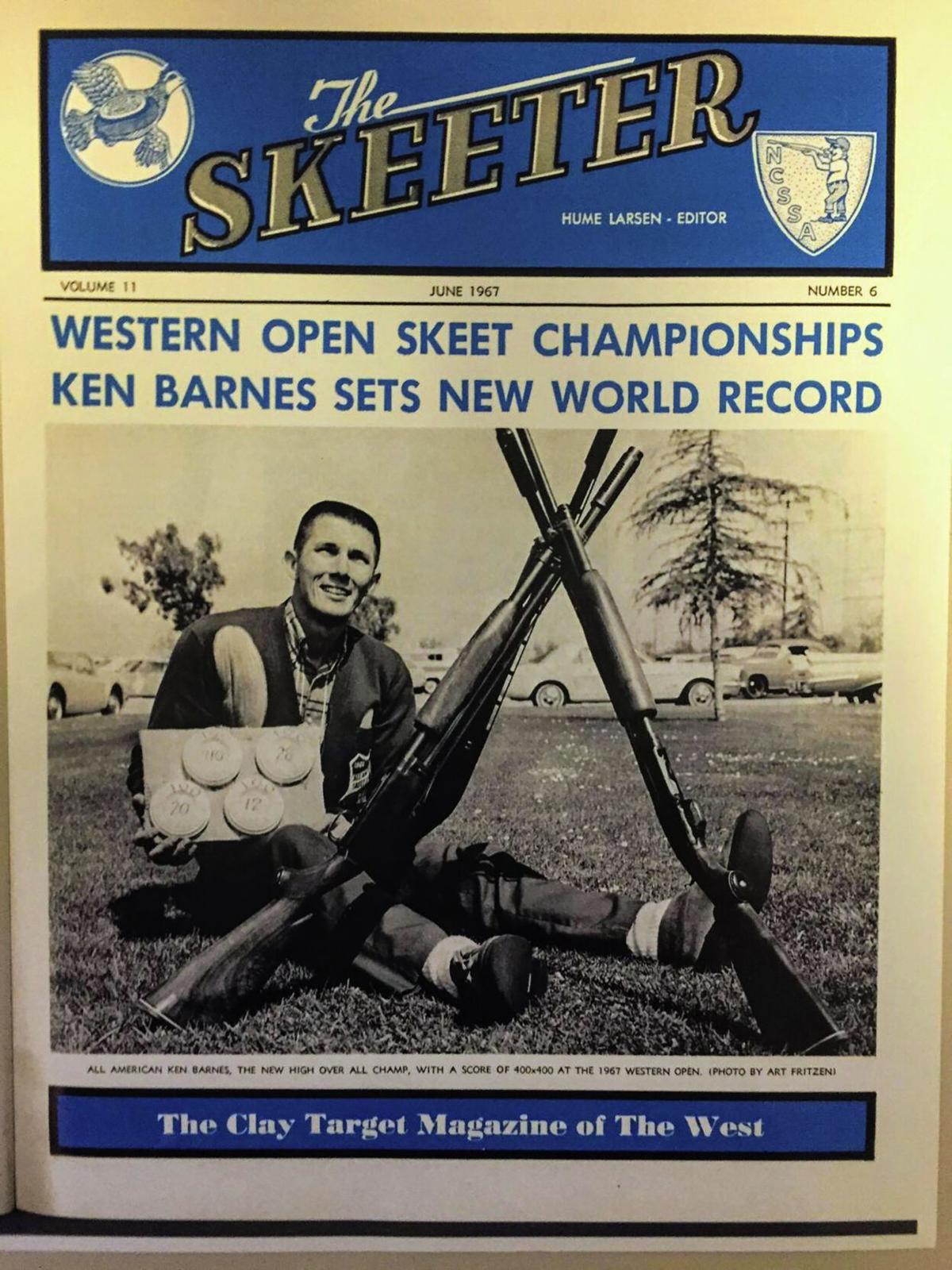 Ken Barnes is shown on the cover of the June 1967 edition of The Skeeter magazine, after breaking the first perfect 400 x 400 in skeet shooting history.

A couple of weeks ago, I was thinking about what to write for today's column, when it dawned on me what the date would be. April 16th! It was a number on the calendar I will never forget. I wrote a story about it four years ago, so I thought it might be good to rerun today. You'll see why it is so important to me. So, here it is:

Wow. Fifty years. Half a century. I am getting old. I still have a very keen memory of the last target I needed to become the first person in skeet shooting history to break a perfect 400 x 400, I was really grateful. The following article was written by my old friend Steve Merlo to commemorate the 30th anniversary of that event.

It's a real honor for me to reprint Steve's words about the occasion today, the exact 50th anniversary of that memorable 1967 weekend. I always told him it was the best article ever written about that shoot.. . .RIP pal. You are missed by many.

From May 1997 issue of Skeet Shooting Review, by Steve Merlo and Ken Barnes. (Editor's note: The magazine is now called Clay Target Nation. The article is reprinted with permission.)

"No ducks. I think we're slopping a dead hog," Ken said. I had heard this phrase many times before during the last 20 plus years I had hunted waterfowl with my hunting partner and pal, Ken Barnes. It meant he was ready to go.

"How about 30 more minutes?" I replied. "I'll split the difference with you . . .15," he answered. We were in one of our favorite hunting areas about 50 miles from our home in Bakersfield, Calif., and the subject of age came up along with the number of years we had been shooting together. Ken commented, "I don't look old. I don't feel old. I don't act old.

The 400, of coarse, was the first 400x400 by a shooter with four guns at one skeet tournament. At the time, the record score was 398x400, which was posted some years earlier by two top junior shooters of the day, Bob Shuley and Mike Martin.

Since its beginnings as an organized sport some 35 years earlier, everyone wondered who, when, and where the first perfect score would be shot.

This was always a major shoot in the West every year, and the field included a number of All-Americans and future Hall of Famers including Alex Kerr, Phil Murray, and Al Buntrock. A heavy spring storm was blowing into the L.A. basin the afternoon of the .410 and strong gusty winds met the competitors all afternoon. Barnes had the only perfect score, and he was followed with two 97's, including his two-man team partner Alex Kerr.

This was Ken's second perfect score with the pee-wee gun. He had won the World Shoot the previous summer in Rochester, N.Y., by taking the first shoot-off in history of 100 straights with the .410. He recalls,

"The winds were really gusty that afternoon, and I really had no idea that I might run a 100. If someone had offered me a 97 or 98 without shooting, I probably would have taken it."

On Saturday, the shooters were met with even worse winds and intermittent showers all day. Ken again ran a 100 straight in the morning to win the event by himself, and repeated in the afternoon with the solo perfect score once again.

Ken remembers, "I was staying with Alex and Carolyn Kerr for the weekend, and I don't think too much was said about me being 300 straight during the evening. I do recall Alex just telling me on the way to the club Sunday morning to just keep doing what I do best - break them one at a time." Sunday morning's weather could not have been better. Bright sunshine and no wind. Ken recalls, "No excuses. I knew if I just worked as hard as I had when the weather was bad, I had a real chance at history. If I could get through the first 25 targets and get a little rhythm going I really felt like I could break a 100."

When Barnes walked out to station eight during round four, most of the shooters on the grounds surrounded the field, including the squads on both sides of him who had stopped shooting to watch. After breaking both station 8 targets, a huge roar went up from the gallery. He had done it. A perfect 400x400.

"I was a little weak in the knees and extremely happy," Barnes said.

Ken had a chance for a complete sweep of all championships if he could take the 12 gauge title. Eight perfect gunners started the regular skeet, miss and out shoot-off. After eight rounds, only Barnes was left along with All-American junior shooters Mike Pelkey and Dianne Vermillion. Starting the ninth round, Ken missed his single low house target from station 2.

He had run an incredible 605 straight targets with four guns during the week-end before missing. Two stations later, Pelkey dropped a bird, and 15 year old Vermillion was the 12 gauge champion. The really amazing thing about Ken's all-around score was that he beat the nearest competitor by an astounding 12 targets. This was probably one of the largest margins of victory in the history of skeet.

His score was even more incredible when you consider the guns and ammo he was using. Unlike the high tech-tech guns, chokes, and ammo of today, Ken was shooting the old paper shells with felt wads. His Winchester pump guns, he would find out later, had atrocious patterns.

He said, "I never really thought about patterns. I just knew the target would break if I pointed the gun in the right place. Some years after I quit shooting these guns, I checked the patterns. The 20 gauge was high and to the left and looked like a modified choke. And the trigger pulls on the four guns ran from a low of 2 pounds to over 6 on one of them. Real scary." He added with a laugh, "For years, some of my close shooting friends claimed the whole thing was a hoax. They said it was impossible for me to hit 50 high 2's in a row without missing. Nice guys, huh."

Barnes of course went on to become one of the game's legends. He was the only shooter to break 400x400 with pump guns. He had ten 100 straights with the .410 gauge. Nine of these were with the Winchester Model 42 pump gun — again, more than anyone else. He is also credited with an amazing 35 scores of 99 x100 with this same gun. He was selected to 12 All-American Skeet Teams, and was twice named as captain. He was also selected to NSSA skeet columnist Ed Scherer's list of 10 greatest shooters of all time.

Ken won eight individual World championships, fourth on the number of titles won behind Wayne Mayes, Alex Kerr, and Todd Bender, and is one of only four shooters to have won each individual gauge championship at least once. He was also national high average leader eight times in the .410, 28, 20, and all-around categories. Six of these averages were world records at the time.

This included being the first person to ever carry a 99.00 percent all-around average, and he was the only one to ever do it with pump guns. During the mid 1980s Ken came out of retirement to try his hand at competitive doubles for the first time. He won the national high average that year with a 99.40 average. At one tome, he held the 28 gauge long-run record of 565 straight.

He won virtually every two-man and five-man event in world competition, teaming with all-time great names as Alex Kerr, Chuck Garberson, Bill Sesnon and Jim Bellows. He holds the record for California State titles with 27 and was a charter member of the state Hall of Fame. He was inducted into the National Hall of Fame in 1973.

Even with all the above records and accomplishments, I think Ken will be remembered as one of the toughest competitors ever in shoot-offs. He was always the one to beat, and his shoot-off record for the World Shoot of winning 8 out of 16 is probably the all time best.

Will Barnes be remembered as one of the greatest pump guns shooters in history? For sure. Will he be considered as possibly the greatest pump .410 shooter ever? His record say yes. But most of all, when his name comes up it'll be about those three special days in 1967, when skeet shooting history was made . . . perfection.