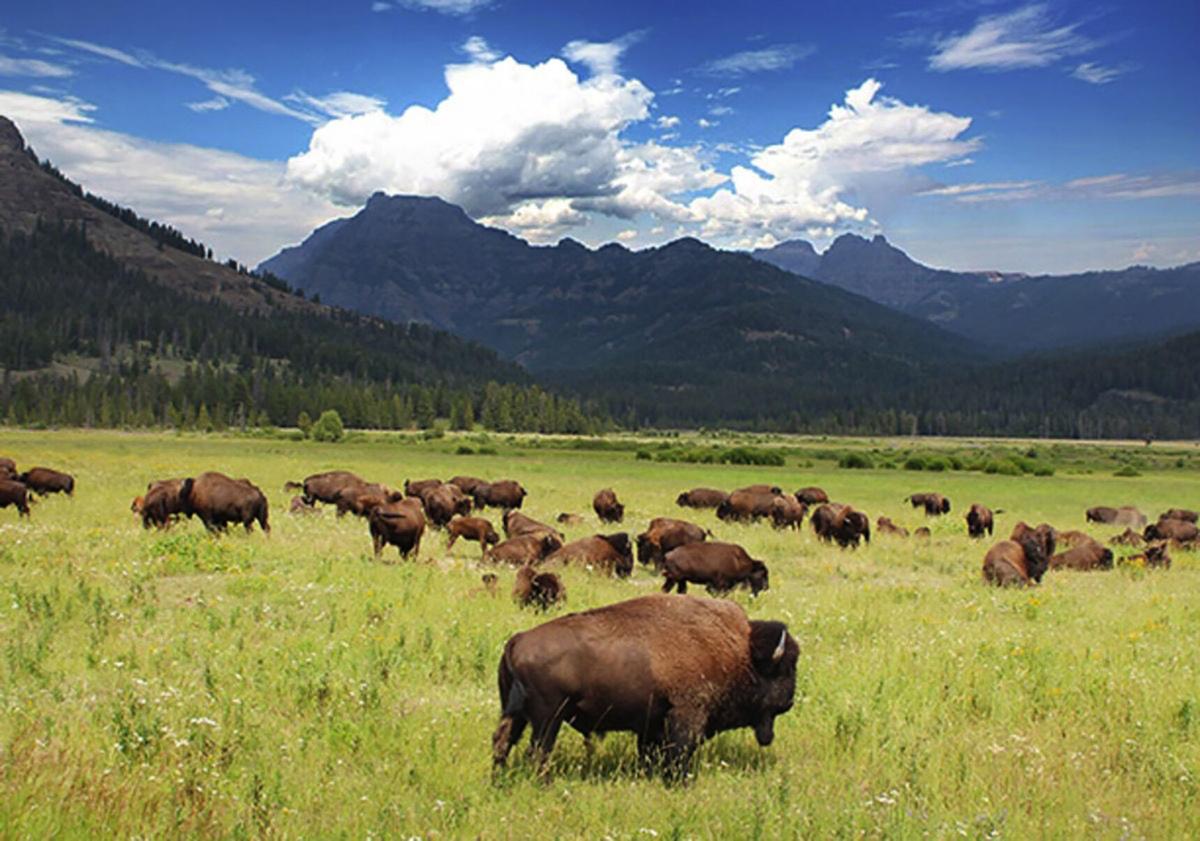 Pictured is a beautiful group of grazing bison like those on U.S. National Parks, such as Yellowstone, Custer, and Grand Teton. 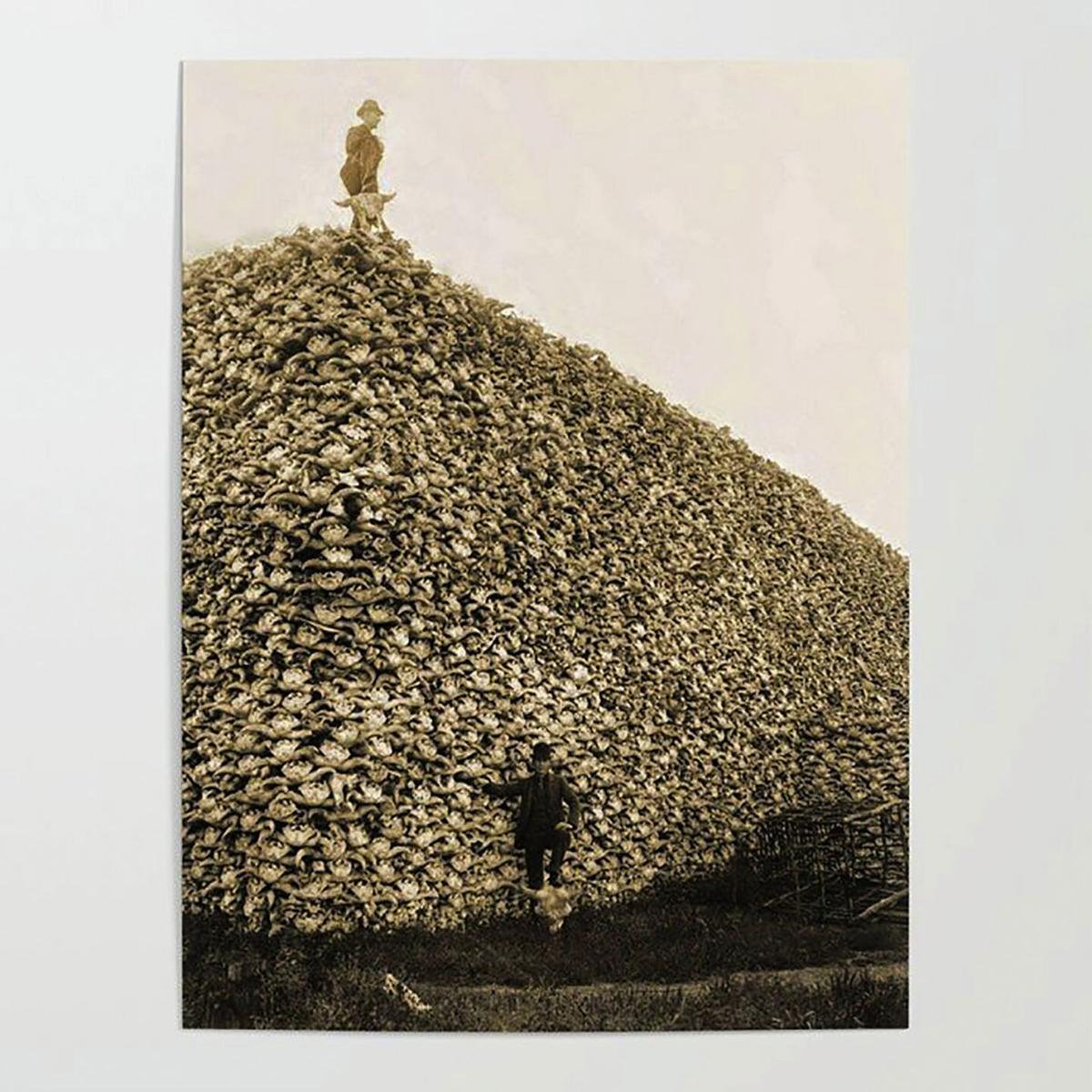 Shown is an amazing photograph taken between 1850 and 1885 showing a man standing atop an enormous pile of Bison skulls.

Pictured is a beautiful group of grazing bison like those on U.S. National Parks, such as Yellowstone, Custer, and Grand Teton.

Shown is an amazing photograph taken between 1850 and 1885 showing a man standing atop an enormous pile of Bison skulls.

Readers may recall a recent column I did about the extinction of the passenger pigeons. At one time the most populous bird on the planet, and in less than 100 years they no longer existed. Billions gone. Totally wiped of the face of the earth.

I was recently watching the film "Dances With Wolves" on television, and there was a scene with Kevin Costner and his Native American friends tracking a herd of buffalo. This animal was the lifeblood of almost all of the plains Indians in the history of North America. Their hides and flesh provided shelter for tents, clothing for one's body, and food for a persons health.

The scene in the film showed a vast prairie area scattered with dozens of decaying bodies of buffalos that had just been robbed of their skin and left to rot. All of the meat just wasted by, you assumed, American buffalo hunters.

When the film ended, I began to wonder what really happened to the millions of buffalo that used to roam the mid-west area of our country.

What were their numbers then, as compared to now. When I did some research, I was awe-struck. Going back thousands of years, the bison was found across most of the area of North America. It stretched from the eastern seaboard to the Pacific Ocean. And, from Northern Canada south to the Mexican border.

The majority of these majestic creatures could be found in the Central Plains of the country. It was estimated that in the early 1800s, as many as 70,000,000, or more, were to be found. It is almost beyond belief that by the mid 1880s there were less that 500 to be found throughout the country. That's right . . .500! Where did they all go? How could something like that happen?

During these years, the Western Expansion was beginning to take place in the United States. The people here had a craving for one major food item . . .beef. And beef meant cattle. And cattle meant huge herds needed to supply the demand. As a result, massive amounts of land were used for grazing. The buffalo was using this land, so they had to be eliminated.

This brought about the legendary "American Buffalo Hunter." Armed with long-ranged hunting rifles, a man could kill as many as 250 bison per day. Tanneries paid up to $3 per hide and 25 cents for each tongue, which made a nice living for men like Wyatt Earp, Wild Bill Hickock and William F. Cody.

Buffalo tongue was considered one of the great gourmet delicacies of the 19th century. It had a delicate flavor and fine texture and was far superior to beef, which was much coarser. It was considered holy meat by Native Americans. Once these hides and tongues were taken from the carcasses, the edible meat was left to decay in the Plains.

By the 1880s, over 5,000 hunters and skinners were involved in the trade. There was little thought to how this slaughter was affecting the Native tribes.

The interdependence between Indian and buffalo is best exemplified in the beautiful words of John Fire Lame Deer . . .

"The buffalo gave us everything we needed. Without it we were nothing. Our tipis were made of his skin. His hide was our bed, our blanket, our winter coat. It was our drum, throbbing through the night, alive, holy. Out of his skin we made our water bags. His flesh strengthened us, became flesh of our own flesh. Not the smallest part of it was wasted. His stomach, a red-hot stone dropped in to it, became our soup kettle. His horns were our spoons, the bones our knives, our women's awls and needles. Out of his sinews we made our bowstrings and thread. His ribs were fashioned into sleds for our children, his hoofs became rattles. His mighty skull, with the pipe leaning against it, was our sacred altar. The name of the greatest of all Sioux was Tatanka Iyotake — Sitting Bull. When you killed off the buffalo you also killed the Indian."

When trains sometimes encountered large herds of buffalo crossing the tracks, they began to advertise "hunting by rail."

It did not take long for sporting men with rifles to kill hundreds just for fun. Those animals shot from the trains were just left.

As the slaughter continued, the numbers pushed them to the brink of extinction.

Today, the American buffalo is one of the environmentalist movements' great success stories. Due to conservation efforts, there are now 500,000 bison in the U.S., including 5,000 in Yellowstone Park. The bison was chosen as America's first national mammal, and they are a symbol of the untamed west. Their resurgence shows we can all learn from and try to correct our mistakes.