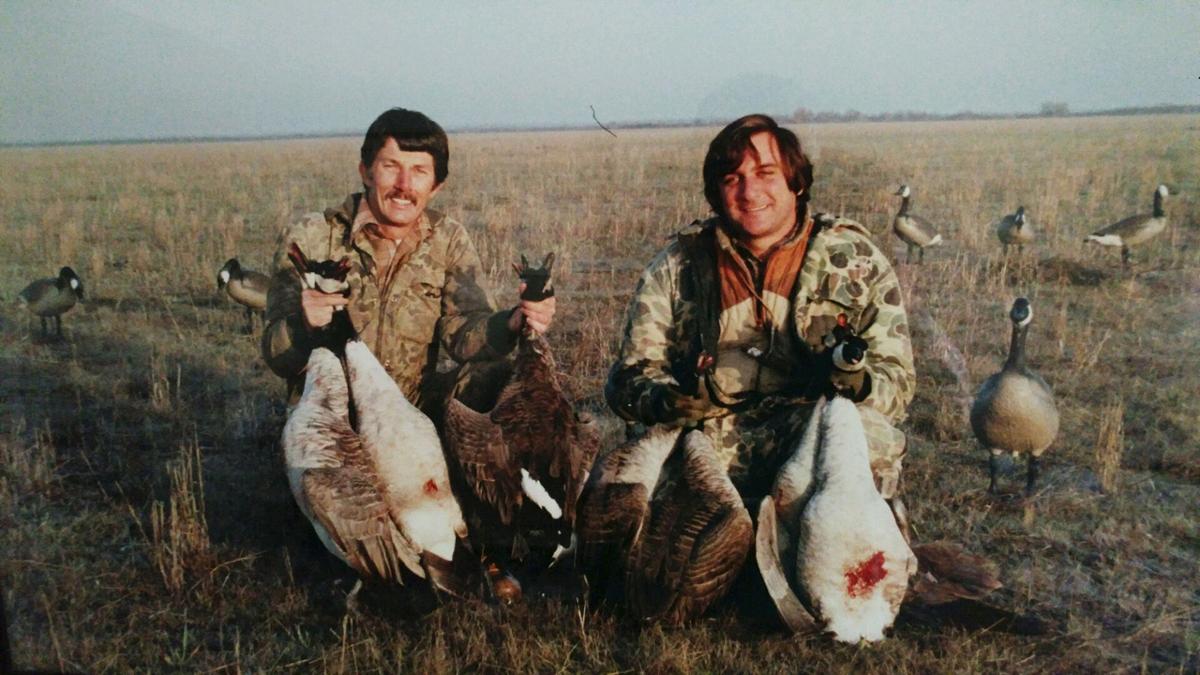 Columnist Ken Barnes is shown with Steve Merlo after a terrific morning Canada goose hunt west of the Kern Wildlife Refuge, back in the day.

Tomorrow is Oct. 24th. It is a very special day for me personally for two very distinct reasons.

First, it is the opening day for the 2020 waterfowl season. It will be my 68th. But, I have a much more personal reason to remember the date. It was four years ago on that day that a funeral service was held for my old friend and hunting partner for over 40 years, Steve Merlo, who had suddenly passed away the week before.

I've had many fond memories of him through some of the columns I have written over the past three-plus years, but there is one that he wrote some years ago that will always stay in my mind like no other. I told him more than once that it was the best thing he had ever done for The Californian.

It was a narrative about the first time he and I met and went hunting together for Canada geese 45 years ago. I thought it special enough to read as a eulogy at Steve's memorial service after he passed away.

So here it is. I only ask one thing of you ... read it very slowly. Give yourself time to absorb the dialog and get visual images of all the descriptive words he uses. Pause between paragraphs and think about what you just read.

If you do this, I think you will feel the same way I do about the story: Merlo at his best.

EDITOR'S NOTE: The following piece is a column written by Steve Merlo that ran in the Jan. 1, 2016 edition of The Bakersfield Californian.

"Many people ask what bird I like to hunt the best and why. It's a difficult choice over notable species as pheasant, dove, quail and duck for sure, but when things boil down to a single vote, my choice goes to the true master of the skies, the Canada goose.

I love watching their majestic "V-shaped" skeins on a winter's morning, and no one quite describes the thrilling sound of geese overhead, honking their way through the migration traffic. I freely admit to being a hunter and truly enjoy pursuing the big, graceful, great-eating bird.

I remember a frigid day lying in a shallow, muddy depression with a close friend for eight hours straight, both of us shivering from the intense cold while waiting for that bird of birds to decoy close.

Finally, with only 10 minutes of shooting time left, they did come. At first, mere specks in the distance, the flock grew into a wavering line of gabbling, quibbling honkers, their minds set on going somewhere other than our decoy spread. My friend, Ken, began answering their plaintive yelps with a thrilling series of pleading notes directed to catch their attention.

When the sound reached them, they turned sharply towards us, not willingly, I think, but because of the expert cajoling from my friend speaking their language, made them believe that this place was a safe haven.

They took their time, something we did not have a lot of, making false landings a quarter mile below us. Not entirely sure, they kept trying to decide whether the grain directly below them was equally as good as over there, where 120 of their cronies seemed frozen in feeding positions.

I remember counting them again and again, finally deciding that a gaggle of 42 Canada geese took up an awful lot of sky, even when 400 yards away. I was shaking, some from the cold, I guess, but more, I'm certain, from the spectacle unveiling before us. Crossing downwind below our spread, they angled toward us, fighting the gusting wind with strong wing beats, talking and humming more like B-2 bombers than geese.

At 125 yards, their prominent cheek patches stood out and I became certain they would see my face and flare from my now uncontrollable shaking. At 100 yards, like 747's on final, they set their wings into upside down "V's", gliding toward us, the entire flock wavering unsure and cautious. But my friend made up their minds for them when he uttered the smoothest rendition of goose talk I could ever hope to hear again ... one smooth, guttural hum, that projected the things they wanted to hear. That they were welcome to share and should feel secure.

At 50 yards, the birds committed, veering into the open space between the decoys, 20 yards high, gabbling excited hellos to their new-found friends. While the balance of the gaggle steered to my left, two of the now backpedaling birds greedily broke off from the rest, descending to only 25 yards in front of us, 15 feet off the ground. And then Ken poked me, telling me to take the larger group now before they were gone. Safety off, I struggled to my knees in time to witness the closest pair take full loads of my pal's No. 2 shot, then plummet to the ground, both dead before they hit.

Swinging my shotgun on the now reeling, sky-clambering flock honking with alarm and fear, I picked the closest bird, led him by two feet and literally jerked the trigger. Feeling the recoil of the three-inch shell hammer back on my shoulder, I heard the shot hit hard but the bird only flinched. My autoloader fed a new load into the chamber and I fired again, this time collapsing the bird as if he had run into some invisible concrete wall.

Tracking him as he fell, I was afraid he might take off again, but he hit the grain field with a satisfying thud.

And there, looking down on the greatest game bird of them all, I felt that same twinge of regret every hunter feels for that fleet second after the kill. Where had he been? Where was he going? How could I kill something so graceful and beautiful? Smiling, I knew the answer. With man's managerial assistance, my goose had become part of a grand natural plan, harvested so that others like him would survive, insuring the bright future of the Canada goose.

Someday soon, I hope, my children and grandchildren will also be able to thrill to the sounds of all that is wild and free, the honking of the wild goose."