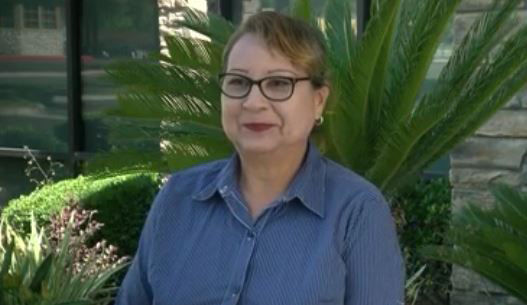 She stands slightly taller than 5 feet, yet this immigrant woman from El Salvador is not afraid to take on the most brutal thugs when it comes to defending her family. Maria del Carmen Carrillo came to the United States in January seeking asylum, fleeing from the violence and direct threats made against her life.

"I know there is danger everywhere, but in reality in my country it is very bad," Carrillo said during a recent interview. "It's the gangs, they extort, they don't let people work and it's totally out of control." To avoid being victimized by gangs, she worked clandestinely as an independent vendor selling clothing and shoes earning the equivalent of five U.S. dollars a day.

Seven years ago, her 22-year-old son, Ruben, was shot dead. That's the price her second oldest paid for refusing to join a gang, said Carrillo.

"They killed him and then they came after the rest of my sons," she said. For the next six years she fought back as best she could to protect her grown sons, who still lived at home. For this she earned the gang's wrath. Another son was severally beaten but survived. In El Salvador police are essentially useless in combating gang violence, according to numerous others who have shared a similar story with me. There's even a gang slogan — "See, hear and be silent" — that rules over gang-controlled areas.

"I told (the gangs) they would have to kill me first before they could take my sons out of my house," said the 53-year-old mother. She became a marked woman and it wasn't long before she was caught off guard.

"I was leaving church and suddenly I have a gun pointed at my head. There were a lot of them, and I was the only woman among so many men. I said to myself, 'My time has come.' But God saved me and they let me go," recalls Carrillo.

In June she scraped enough money together to travel to Mexico, arriving two weeks later at the U.S.-Mexico border seeking asylum. She was given a number and forced to wait in Mexico for three months before being called to immigration court in San Diego to begin the asylum process.

It did not go well. Unable to afford an attorney, Carrillo represented herself as best she could and tried to explain her dire circumstances to the judge. In less than 10 minutes, it was over and she was ordered to return the following month. And get a lawyer, the judge told her. Without an attorney, her next court hearing did not fare any better and her petition for asylum was denied.

Her denial hardly comes as a surprise to Bakersfield immigration attorney Win Eaton. The Trump administration unilaterally changed the rules last year, making it extremely difficult for people like Maria Carrillo to obtain a chance of a new life, or in this case staying alive.

Attorney General William Barr ruled that asylum will no longer be granted to people who fear persecution because criminal gangs have threatened members of their family, partially reversing a federal Board of Immigration Appeals determination.

"They will never grant asylum to anybody," said Win.

Carrillo is not yet giving up hope and is appealing her case. Earlier this month, Carrillo was among a group of women released from Mesa Verde ICE detention center. The women's release was a resounding legal victory for a coalition of legal groups including ACLU, which filed a lawsuit against ICE, claiming detainees at Mesa Verde were at risk of contracting COVID-19 because of poor conditions. She had no idea she would be released until woken up by guards and told to gather her belongings.

"At first I thought they were taking us to another prison," she said. Then she learned she was being released and would be able to live with a cousin in another state while awaiting her next court date. "It was like an angel had come down to earth to lead us out," said Carrillo.

Her fate remains uncertain. Still without an attorney, she is scheduled to appear before a judge on June 28 to plead her case. What if you get sent back to El Salvador, I asked her?

"They will kill me," said Carrillo.