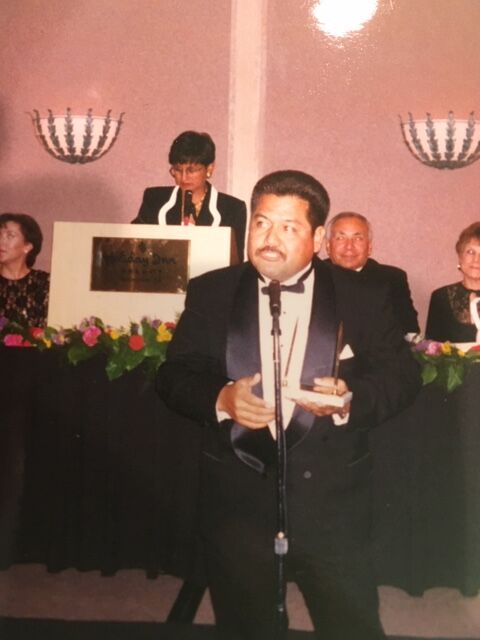 Cornelio Rodriguez is selected as the Educator of the Year in 1994 by the Kern County Hispanic Chamber of Commerce. 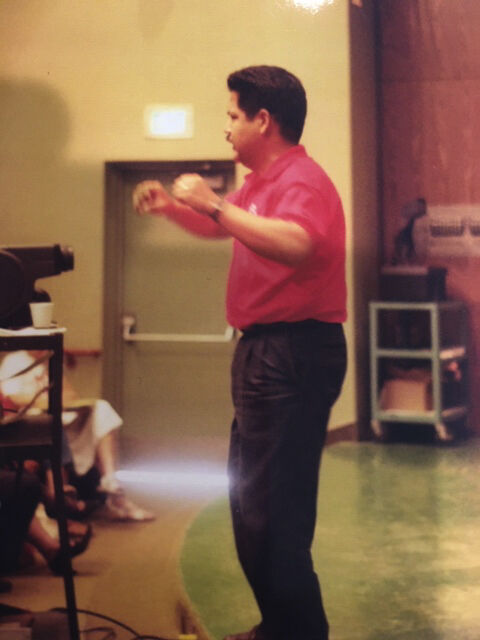 Cornelio Rodriguez presents at a college readiness program at Bakersfield College in 1993.

Cornelio Rodriguez is selected as the Educator of the Year in 1994 by the Kern County Hispanic Chamber of Commerce.

Cornelio Rodriguez presents at a college readiness program at Bakersfield College in 1993.

"I was a cholo in high school," said Cornelio Rodriguez, better known as simply "Corny" to friends and colleagues. For those of you who are culturally deprived, "cholo" is a slang term, which at one time was used by police and institutions to equate young people of Mexican descent who dressed a certain way and came from tough hoods with a criminal or gang lifestyle.

Though he walked the walk and talked the cholo talk growing up in Norwalk during the '70s, Rodgriguez was a cholo with pride. Pride in his culture and in his humble roots. This was the height of the Chicano movement, when a generation of young people was awakening socially and politically, active in local, state and national issues. Rejecting neighborhood pressure to join a gang, Rodriguez used his choloness to organize students at his Norwalk high school.

"The school was half white and half Chicano and there was racial tension," recalled Rodriguez. He got involved in student government and organized school dances to bring white and brown students together. "That was the first time anybody had done that."

Sounds like Rodriguez could've gone into politics, but instead he chose to make an honest living. He pursued education. The cholo born in Mexicali, raised by parents who worked in the fields for awhile and raised on the other side of the tracks in Norwalk defied the odds and wound up holding some of the top administrative jobs in higher education in Kern County. After 40-plus years in education, Corny Rodriguez retired this year, his last post as dean of instruction at Bakersfield College.

It's been quite a ride for the soft-spoken man with a keen insight into students' needs and the obstacles faced in accessing higher education. Arriving in Bakersfield in 1986, he first worked at Cal State Bakersfield where he delved into helping minority students finish high school and then navigate the application process to get into college. This was a time when the high school dropout rate in Kern County was ridiculous. During this time, Delano had a dropout rate of around 40 percent. Rodriguez left Cal State in 1991, when Sandra Serrano stole him away to join BC, where he would hold a number of positions for 29 and a half years.

Again, he pursued what he loved doing, going right back out to community meetings in Arvin, Lamont, Delano and other places to inform parents and students about pursuing a college education. For those families who couldn't make the meetings, he would make house calls.

"I would show them that if their son/daughter received a college education, they would have a better life," said Rodriguez. "All I had to do is reach the right people and the parents themselves would tell others, 'llamale a Cornelio, or call Cornelio.'"

But that was just half the battle. The rest was keeping students in school and making sure they graduated, which was not always easy.

"Sometimes parents would come see me and ask why their son or daughter was spending so much time with school work," recalls Rodriguez. "They thought they were doing something else not good, and I had to explain what college entailed."

Besides mentoring students, Rodriguez took on teaching political science, becoming the first Latino elected as Academic Senate president for four years. He tried to stave off as many cuts as he could to programs deemed vital for student success. During his tenure, the agricultural program at BC more than doubled, and it now offers seven majors, said Rodriguez.

Despite tough financial times, he remains optimistic. Said Rodriguez, "I see a lot of good things at BC."

He credits current BC President Sonya Christian as having strong leadership skills dedicated to making college accessible for all students. So after 40-plus years in education, Corny stepped down this year, his last title being executive dean of instruction at BC.

"I always wanted to work somewhere where I could help others," said the ever-optimistic man. Some educators tend to focus only on academia, but Rodriguez practiced what he preached.

I recall the week when Cesar Chavez died. Condolences and messages of solidarity were pouring in worldwide at the offices of the United Farm Workers, the union co-founded by Chavez right here in Kern County. But not a peep was said by the then Kern County Board of Supervisors to acknowledge his death. Until Rodriguez, along with others, went before the board and essentially said, "Hey, what's the matter with you guys?" A reluctant board was embarrassed into acknowledging the death of the late labor leader.

Plans to celebrate and rightfully recognize Rodriguez's long tenure in education were never realized this year, falling victim to the pandemic.

BC has lost a number of noted Latino educators at BC in recent years, including Ray Gonzalez, Jess Nieto, Manuel Gonzales, David Rosales and now Rodriguez. But he's not going away completely. He's actually enjoying the best of both worlds, staying involved with projects at BC and enjoying spending time with his nine grandchildren.

"I'm not going away. I'm still involved," said Rodriguez. This cholo has come a long way, and for that, countless numbers of students and their families are better off.